Biden proposes $6 trillion of government spending in the 2022 fiscal year. This continuation of ultra-loose fiscal policy could support gold in the long run.

On Friday (May 28), the White House presented the President’s budget for the 2022 fiscal year that starts on October 1, 2021. Biden trumped Trump and proposed $6 trillion, over one trillion more than Trump in his last year’s proposal for $4.8 trillion. Furthermore, POTUS wants to raise government outlays to up to $8.2 trillion by 2031.

According to the White House, the proposed fiscal agenda will further increase the total federal debt-to-GDP ratio, from the current 129.1% to 136.9% by 2031. Meanwhile, the federal debt held by the public is estimated to rise from the current 100.7% to 108.5% of the GDP. The current level of the US public debt compared to the size of the economy is presented in the chart below. 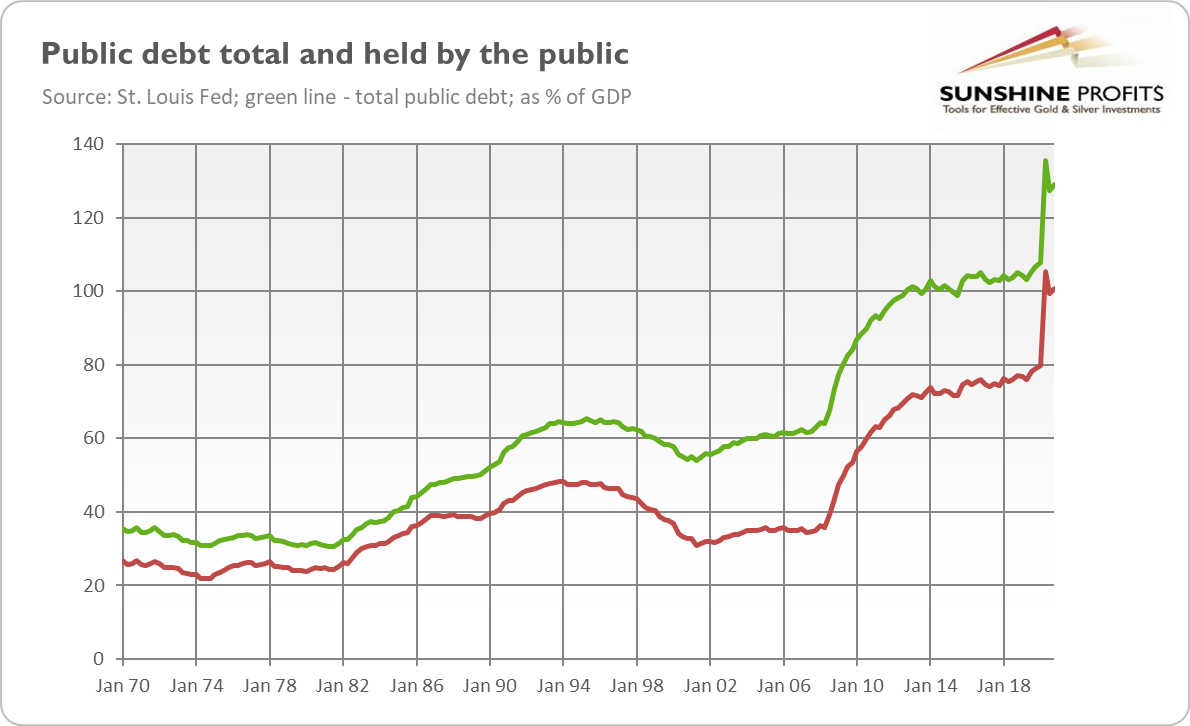 Despite the increase, Janet Yellen, Treasury Secretary, said that “it is a fiscally responsible program”. Yeah, right. Of course, it’s true that real interest rates are very low, and therefore the debt service costs are bearable; but the interest rates could go up one day. And even when the bond yields are low, there is still the crowding out effect and other negative consequences, as higher government expenditures imply higher taxes and fewer resources for the private sector. Last but not least, the GDP has practically returned to the pre-pandemic level, so such big fiscal programs are clearly excessive and could add to inflationary pressure.

What does the budget for the next fiscal year mean for gold prices? Well, although Trump was trumped in the last elections, trumpism is still doing well. Here I’m referring to the fact that Trump started to balloon the government spending and fiscal deficits well before the pandemic. Then the coronavirus hit and the fiscal policy became even looser. And now President Biden raises the stake, widening the budget deficit and public debt despite the recovery from the economic crisis.

In the short term, it doesn’t have to be good news for gold. This is because big deficits and federal debt could exert upward pressure on the Treasury yields, resulting in higher interest rates, which would suppress the price of gold.

Also of importance is the fact that the 2021 fiscal year was a period with an unprecedented size of the fiscal stimulus. So, although Trump proposed ‘only’ $4.8 trillion of government spending and almost $1 trillion of deficit, the actual numbers were much bigger: $7.2 and $3.7 trillion, respectively. In contrast, Biden’s proposal sees the budget deficit worth ‘only’ $1.8 trillion. In relative terms, the fiscal deficit is projected to decline from the current 16.7% to 7.8%.

Of course, the actual numbers will probably be bigger than the White House’s projections. But still, when compared to the previous year, the fiscal policy will become tighter – on a relative basis. However, the fiscal policy will remain ultra-loose; the fiscal deficits are never assumed to decline below $1.3 trillion or 4.2 percent of the GDP, and the public debt is projected to reach a level not seen since World War II.

However, the Fed is ready to intervene if the interest rates increase too much. And, at some point, the current ‘debt elephant’ will become too big to pretend it’s not present in the room. The current policy mix of ultra-loose monetary policy and ultra-loose fiscal policy (despite the economic recovery) is unprecedented and raises the risk of a debt crisis in the more distant future. It seems that some policymakers are starting to notice that, as they switched their narrative from “debt is no problem” to “we have to pay for it through raising corporate taxes”. We can see that even in the White House’s document, as it factors in an increase in the corporate tax rate from 21% to 28%.

Hence, the continuation of the US’s irresponsible fiscal policy could add to the positive momentum in the gold space, especially while taking into consideration that all these new social and infrastructure programs arrive during a period of economic expansion and inflationary pressure. So, the era of big government (with bigger government expenditures and fiscal deficits) and higher inflation is back. It could be, thus, an era of shining gold.