Having sparked hyperinflation in European gas prices and record energy costs around the globe with their poorly conceived and implemented Russian energy sanctions which have backfired spectacularly, allowing Moscow to reap record energy export profits and China and India to buy oil far below spot prices while leaving US motorists paying record prices at the pump, on Sunday the Biden admin alongside the G-7 announced that they will ban Russian gold imports to "further impose financial costs on Moscow for its invasion of Ukraine."

The import ban will apply to gold leaving Russia for G-7 countries for the first time, and will be codified by the US Treasury Department on Tuesday.

“Together, the G7 will announce that we will ban the import of Russian gold, a major export that rakes in tens of billions of dollars for Russia” Biden tweeted on Sunday, the first day of a G7 meeting in Germany; a formal announcement is expected later on during the summit.

The United States has imposed unprecedented costs on Putin to deny him the revenue he needs to fund his war against Ukraine.

Together, the G7 will announce that we will ban the import of Russian gold, a major export that rakes in tens of billions of dollars for Russia.

While Western sanctions to punish Russia have largely closed European and US markets to gold from the world’s second-biggest bullion miner, the G-7 pledge would mark a total severance between Russia and the world’s top two trading centers, London and New York, largely a purely symbolic escalation.

“What this does is formalize what the gold industry has already done anyway,” said Adrian Ash, head of research at brokerage BullionVault.

As a reminder, back in March the LBMA, or London Bullion Market Association, removed Russian gold refineries from its accredited list. As a result, shipments between Russia and London have collapsed to almost zero since the invasion of Ukraine.

While refineries in theory could still import Russian gold directly, most of have sworn off doing so. The association for Swiss refiners, which dominate the industry, denied that its members bought gold from Russia after trade data indicated the nation’s bullion had entered the country.

The official talking point here, encapsulated by the pro-Biden outlet, The Hill, is that "while it does not bring in as much money as energy, gold is a major source of revenue for the Russian economy. Restricting exports to G7 economies will cause more financial strain to Russia as it wages the war in."

That, of course, is incorrect: the biggest buyers of gold in recent years have not been G7 countries (United States, France, Canada, Germany, Japan, the United Kingdom and Italy), many of whom naively sold much if not all their gold in the recent past and have refused or simply don't have the funds to restock; instead purchases have all been by developing nation central banks (like India and Turkey, and of course China which however has a habit of only revealing its true gold inventory every decade or so) who have been quietly preparing to do what Russia is doing by dedollarizing and instead allocating capital into a counterparty-free asset. 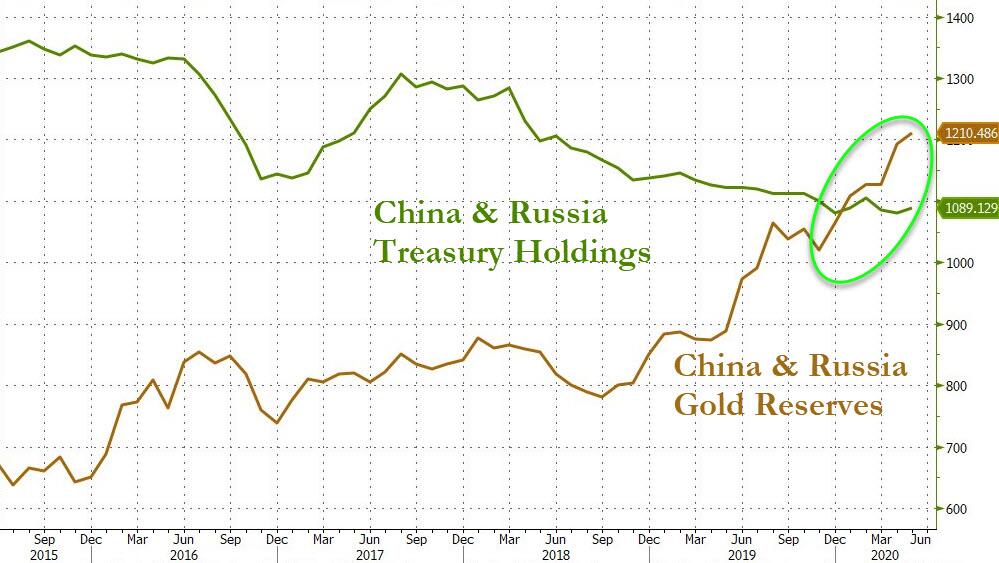 As for Russia, its central bank has been an aggressive buyer of gold, not seller, and if anything Biden's decision will only make the gold market the latest to follow the example of oil and bifurcate: cheaper for Russian-friends and much more expensive for Russian enemies.

Still, the Hill is right in that the U.S. and its allies have been searching for more and creative ways to punish Russia for the Ukraine war that recently entered its fifth month. And whereas Biden has announced waves of penalties coordinated with allies that range from sanctions on Russian officials and oligarchs to export controls to sanctions on major Russian banks, so far the Russian ruble, which Biden gladly mocked back in February as "rubble", has since risen to a seven-year high against the euro.

Meanwhile, Europeans are also limited in what they can do because of their dependence on Russian energy imports. European countries have vowed to phase out Russian oil but have not taken steps like the U.S. to do so immediately because they simply can't. And the ironic think is that while European should be buying more gold to protect the purchasing power of their currencies ahead of the mass printing tsunami that is coming when the next recession begins, they are now voluntarily barring themselves from doing so.

Biden administration officials also teased new announcements to squeeze Russia ahead of Biden’s trip to Europe and it’s possible there will be more announcements beyond the plan to ban Russian gold imports. We expect all of them to backfire, especially if Biden decides to also target other Russian metals exports. As a reminder, unlike gold, flows of other metals from Russia such as copper, nickel and palladium have continued uninterrupted as Russia is simply irreplaceable in those supply chains and the commodities industry grapples with managing a long-held relationship with a major supplier of the world’s raw materials.

As for the price of gold, what happens when the second biggest gold mining nation in the world and a major source of supply is cut off from the western market... 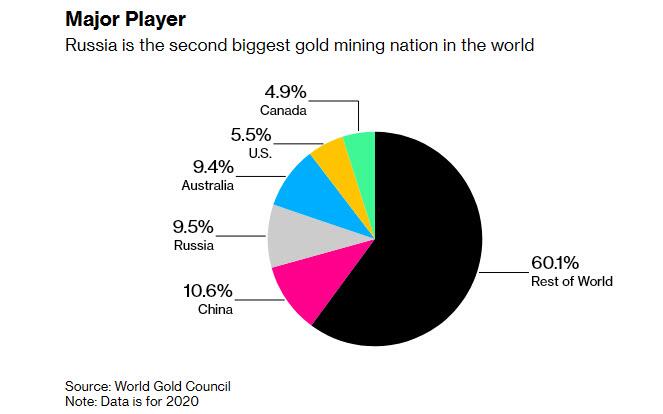 ... even if it is still allowed to transact freely with the "rest of the world" which accounts for roughly 80% of the population, and will most likely simply boost sales to China and the Middle East, both of whom will be happy to continue purchasing Russian gold? We'll find out in a few hours.