In “Post-Fed Rally: Good as Gold”, I concluded that gold futures prices looked “poised to shape a new upleg and test $1281 in coming weeks”. The level, corresponding to both a 61.8% Fibonacci retracement and a 61.8% target, constituted a fairly significant technical resistance and bypassing this threshold is a notable bullish development.

Over the past few weeks several political and geopolitical factors goaded safe haven assets higher, providing a particularly positive environment for gold and helping to push it past this fairly important resistance.

GEOPOLITICAL FACTORS IN THE DRIVER’S SEAT

Geopolitical tensions have escalated significantly recently, particularly over Syria and North Korea. Following a chemical weapons attack on April 4 ascribed by the US to the al-Assad regime, President Trump ordered the first direct military strikes against the Syrian government on April 6.

On the day prior to the US bombing, Trump’s comments at a press conference with King Abdullah II of Jordan that the Assad regime had “crossed a lot of lines” led to gold futures prices rallying from $1248 to $1260.9, a 1% move. As the strikes, which occurred during Chinese President Xi Jinping’s visit, began to take place prices rose nearly 1.5% (from $1253 to $1271.5) in less than an hour.

Not surprisingly the bombing drew ire from Russia, a Syrian government ally, particularly as the US posited the Kremlin may well have been aware of the chemical attacks before they happened. With US-Russia relations at a “low point”, as Secretary of State Rex Tillerson pointed out during his visit to Moscow last week, tensions between the two nuclear superpowers appear likely to remain high in the short-term and supportive of gold prices.

Tensions have also ratcheted up in the Korean Peninsula in the past few weeks, as saber-rattling by both North Korea and the US has escalated anxiety levels on all sides. Ahead of the military parade celebrating the 105th anniversary of the birth of North Korea’s founding President Kim Il-sung, President Trump sent an “armada” to the Peninsula. Trump has increasingly put pressure on China to “deal with North Korea”, claiming that “if not, we will solve the problem without them”, while using future trade negotiations as leverage for Chinese collaboration on the matter.

North Korea is looking for trouble. If China decides to help, that would be great. If not, we will solve the problem without them! U.S.A.

I have great confidence that China will properly deal with North Korea. If they are unable to do so, the U.S., with its allies, will! U.S.A.

Following the failed missile test by Kim Jong-un’s military over the weekend, Trump justified backtracking on a campaign promise of labelling China a currency manipulator by claiming the country is now “working with us on the North Korean problem”, after tweeting last week that a “trade deal with the U.S. will be far better for them if they solve the North Korea problem”.

I explained to the President of China that a trade deal with the U.S. will be far better for them if they solve the North Korean problem!

Why would I call China a currency manipulator when they are working with us on the North Korean problem? We will see what happens!

Although tensions appear to have subsided somewhat compared to last week, the situation is unlikely to be resolved in the short-term, not least with the early deployment of the THAAD missile system and upcoming presidential elections in South Korea.

Meanwhile in Europe, as presidential elections in France have become a tighter race it has added further to political uncertainty and anxiety over the future of the European Union. Although centrist Emmanuel Macron appears as a favorite, the race is seen as too close to call and the potential for a far-right (Marine Le Pen) or far-left (Jean-Luc Mélenchon) candidate being elected and reshaping French policy towards the EU is not negligible. In particular, both far-leaning candidates have called for a referendum on EU membership and are favorable to “Frexit”. A second-round run-off with either, let alone both, would also likely provide further support for gold prices over the coming weeks.

In the US, the initial failure to pass healthcare reform has begun to raise doubts about central tenets of Trumponomics such as substantive tax reform and infrastructure spending. Unless clear progress can be demonstrated on these two issues in the near future, not to mention greater clarity on trade reform, uncertainty is unlikely to diminish significantly. An additional source of potential instability in coming weeks is the growing risk of a federal government shutdown if a new spending bill or continuing resolution is not approved by the April 28 deadline.

Turning to monetary policy in the US, according to the minutes released on April 5th most FOMC participants during the March meeting “judged that a change to the Committee’s reinvestment policy would likely be appropriate later this year.” Despite the Fed’s stated intention to begin to “normalize” its balance sheet by the end of the year the impact on bond markets was muted, as the geopolitical developments mentioned above took center stage.

In this flight to quality environment yields on 10-year Treasuries and TIPS continued to fall, helped further along by the US President’s comments last week that “our dollar is getting too strong” and that he favors low interest rates, with nominal yields dropping below important technical support at 2.30% which suggests a continued positive backdrop for gold prices.

The correlation since January 2007 and current 10-year TIPS yields still suggests slightly higher prices for gold and, considering the relationship between gold, 10-year Treasury yields, the money supply, and the US dollar over the past 40 years (adjusted R2: 0.8577), the precious metal still appears significantly undervalued.

In terms of technical analysis, the price action over recent weeks has been very positive with gold overcoming important resistance. The 200-day moving average, a popular indicator, has been bypassed at $1260, as has Fibonacci resistance at $1281. The move has taken shape as money managers continued to increase their net long exposure in futures and options, which at over 140k contracts as of April 13 remains far from excessive levels and has further room to grow. Having said that, as prices approach $1300, which currently constitutes the third most popular strike for calls in terms of open interest in Comex futures, a pause in the rally is not unlikely. 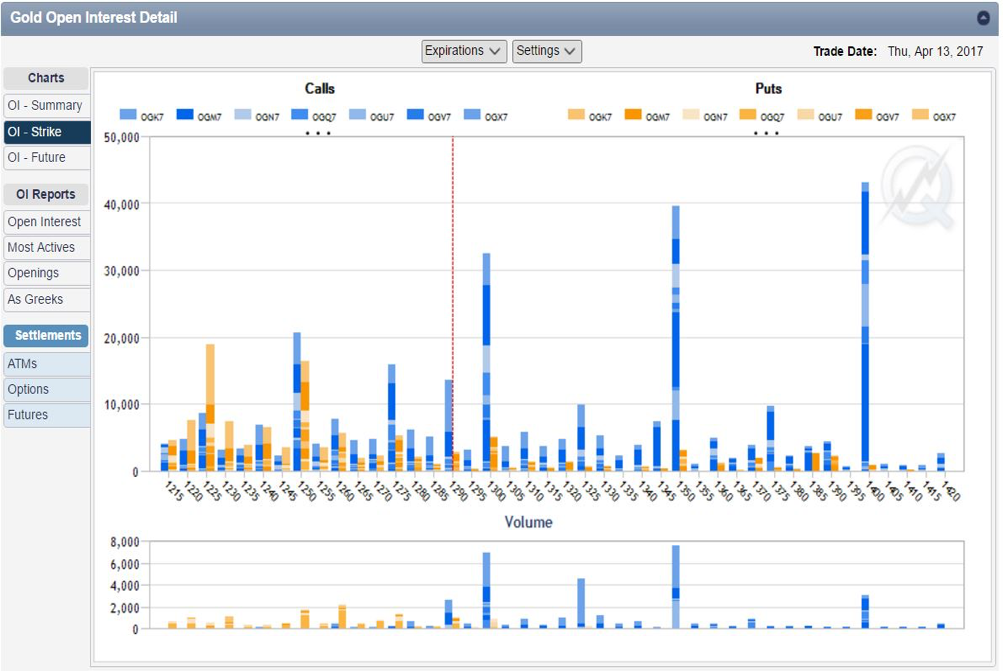 Despite the potential for a reaction in the short-term below $1305 given trendline, channel, and Bollinger band resistance as well as option-related activity, futures prices should then resume the march higher towards Fibonacci targets at $1323 and $1335, with the next major resistance level coming in at $1378. Bigger picture, only a breach of $1161 would confirm a deeper correction to the longer-term support at $1045. In the shorter-term, $1260 provides support and $1231 should not be broken if the current ascending channel is to remain intact. 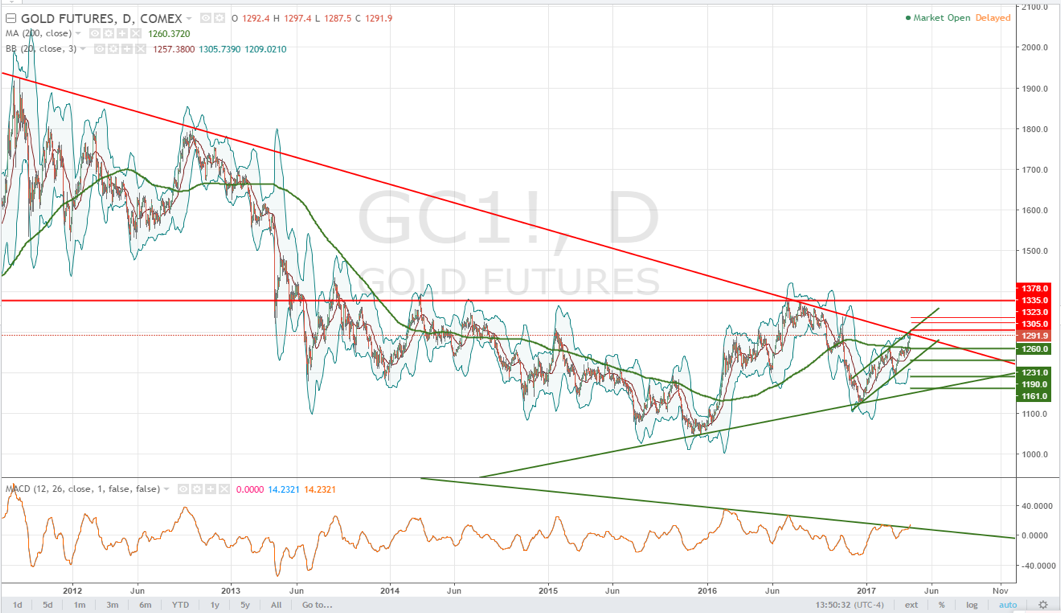