Bar and coin demand jumped 28% to 298.1t as retail investors took advantage of the lower gold price and sought protection against currency weakness and tumbling stock markets. Jewellery demand rose 6% in Q3 as lower prices caught consumers’ attention. A growing number of central bank buyers saw demand in this sector rise 22% y-o-y to 148.4t, the highest level of quarterly net purchases since 2015. Technology registered its eighth consecutive quarter of y-o-y growth, up 1%. Sharp outflows in gold-backed ETFs offset growth across much of the gold market. 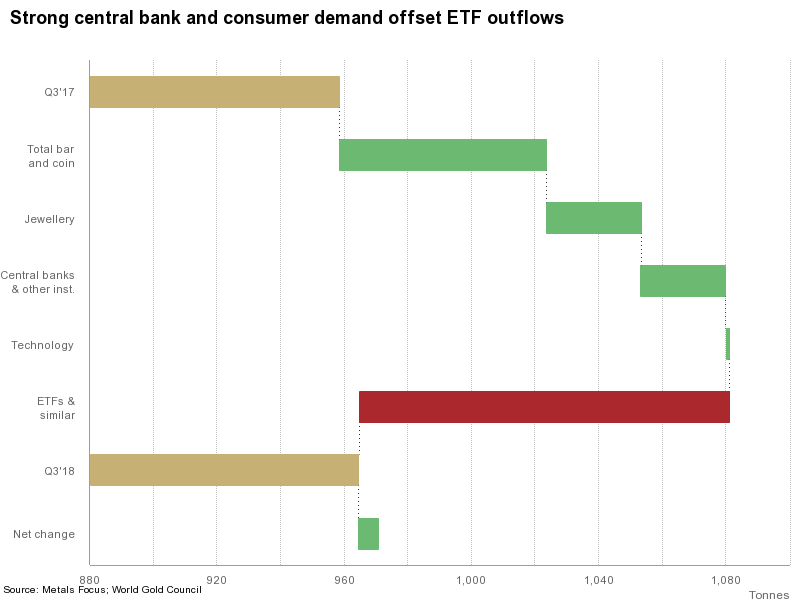 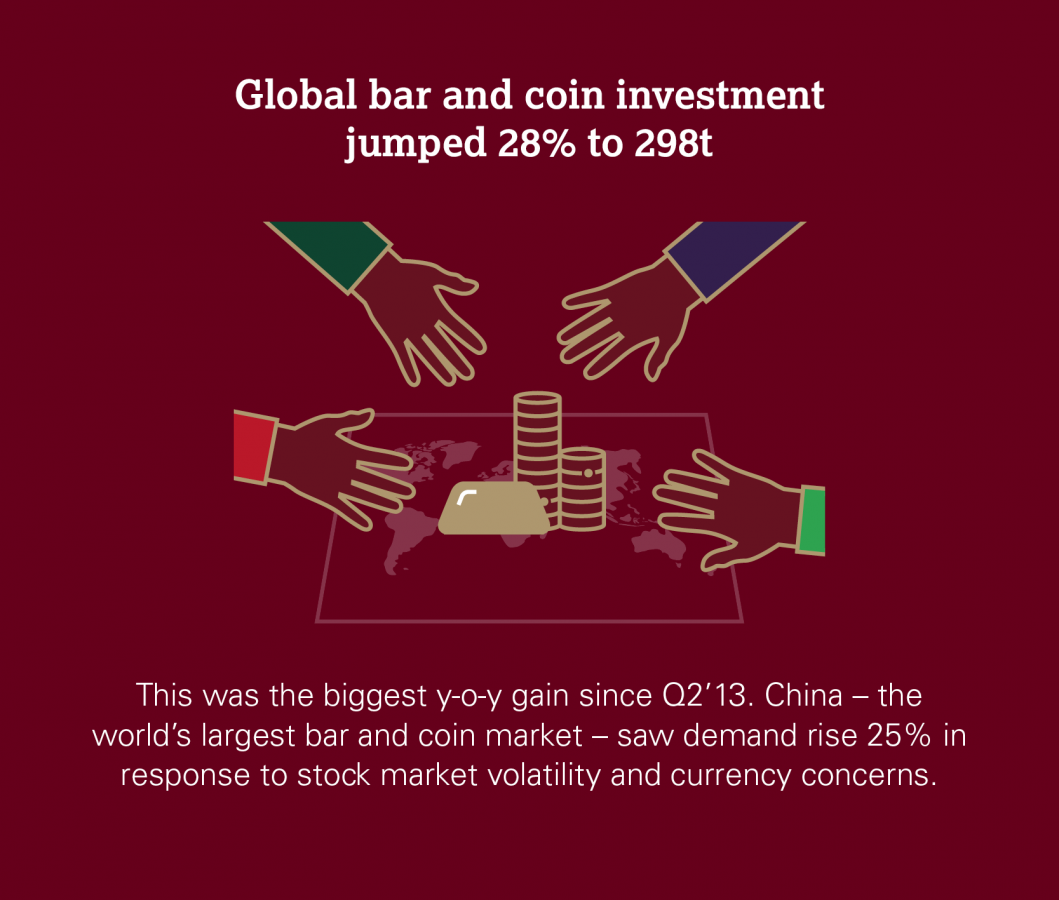 Central bank gold reserves grew 148.4t in Q3, up 22% y-o-y. This is the highest level of net purchases since 2015, both at the quarterly and y-t-d level. A couple of other central banks joined Russia, Turkey and Kazakhstan in significantly increasing reserves in Q3.

Russia’s gold holdings continued to grow as it sold its dollar assets. Q3’s 92.2t increase was Russia’s biggest quarterly net purchase on record. Russian reserves amounted to over 2,000t for the first time, equivalent to 17% of total reserves.

Despite political and economic turmoil, Turkey continued to add gold to its reserves. Net purchases (excluding Reserve Option Mechanism holdings) grew by 18.5t in Q3, a quarter that saw the lira weaken by 25%. This brought official holdings to 258.6t.

Kazakhstan continued its steady accumulation. Gold reserves at the central bank continued to rise throughout Q3. Net purchases of 13.4t for the quarter brought total reserves to 335.1t.

After minor purchases over recent months, the Reserve Bank of India ramped up its buying in Q3, increasing reserves by a further 13.7t. This brings y-t-d purchases to 21.8t. European central banks also started to buy gold. The National Bank of Poland bought gold every month in this quarter, boosting the overall level of reserves by 13.7t to 116.7t. And in early October, Hungary announced that it had increased gold reserves ten-fold – from 3.1t to 31.5t, its highest level since 1990 – with the aim of enhancing the long-term stability of its reserve portfolio, citing gold’s lack of counterparty or credit risk as key benefits. 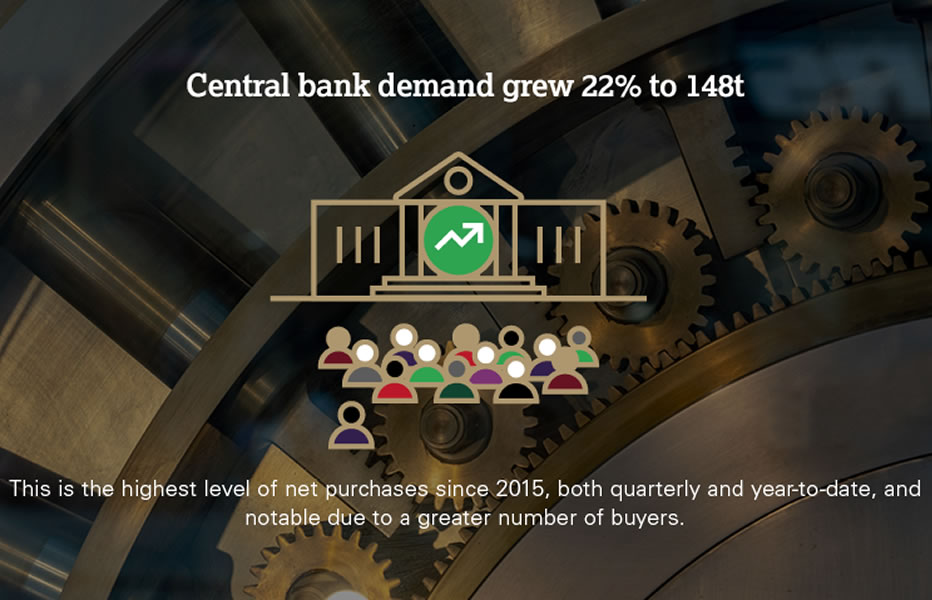 Demand for gold in technological applications rose in Q3 by 1% y-o-y, to 85.3t. This marks the eighth consecutive quarter of growth, primarily driven by gold’s use in electronics such as smartphones, servers and automotive vehicles.

ETFs shed 103.2t in Q3. ETFs saw a 116t decline when compared with inflows of 13.2t in Q3 ’17, experiencing the first quarter of outflows since Q4 2016. North America accounted for 73% of outflows, fuelled by risk-on sentiment, the strong dollar and price-driven momentum. 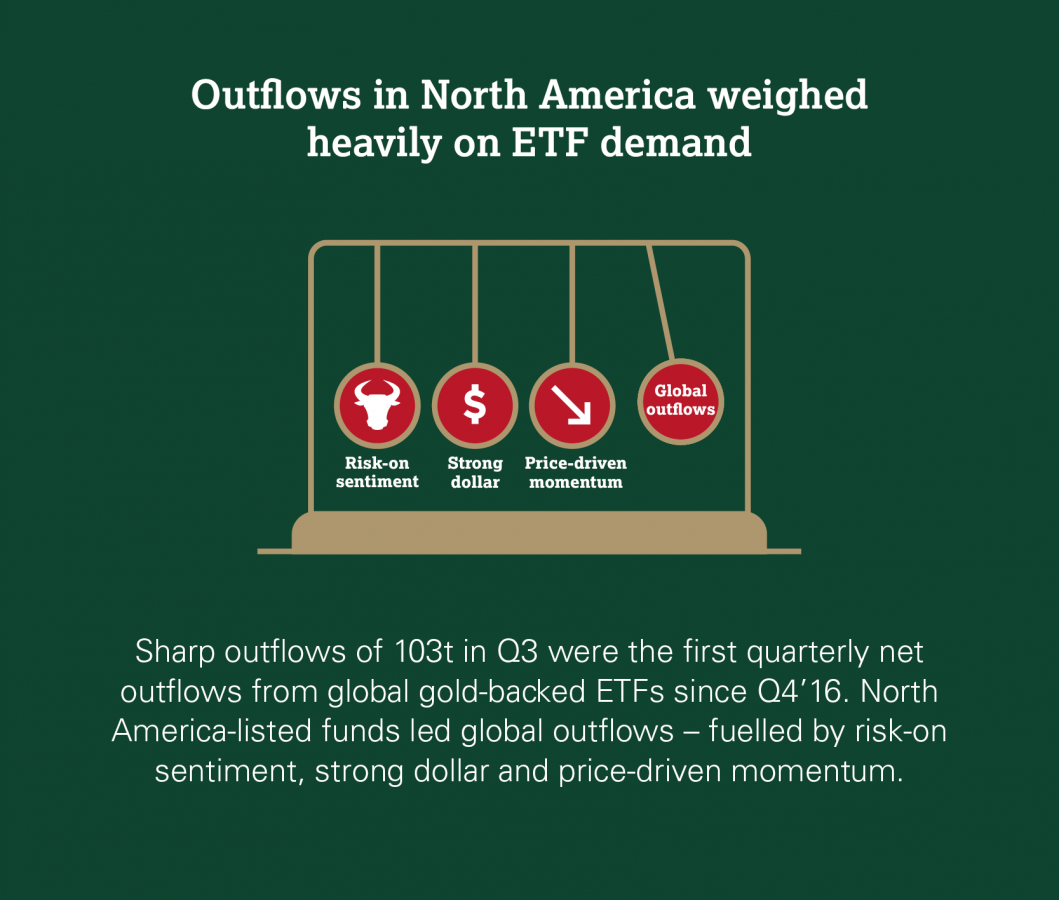