The coming gold and silver moves in the next few months will really surprise most investors as market volatility increases substantially.

It seems right now that “All (is) quiet on the Western Front” as Erich-Maria Remarque wrote about WWI. Ten years after the Great Financial Crisis started and nine years after the Lehman collapse, it seems that the world is in better shape than ever. Stocks are at historical highs, interest rates at historical lows, house prices are booming again and consumers are buying more than ever.

HAVE CENTRAL BANKS SAVED THE WORLD?

So why were we so worried in 2007? There is no problem big enough that our friendly Central Bankers can’t solve. All you need to do to fool the world is to: Print and expand credit by $100 trillion, fabricate derivatives for another few $100 trillion, make further commitments to the people in forms of pensions and medical, social care for amounts that can never be paid and lower interest rates to zero or negative.

And there we have it. This is the New Normal. The Central Banks have successfully applied all the Keynesian tools. How can everything work so well with just more debt and liabilities? Well, because things are different today. We have all the sophisticated tools, computers, complex models, making fake money QE, interest rate manipulation management and very devious intelligent central bankers.

Or is it different this time?

All these shenanigans by central banks have created fortunes for the top 1% and massive debts for the rest of the world. For some of us who spend considerable time studying risk, you can make two very distinct conclusions:

- On the one hand, central bankers have been extremely skilful in using all the tricks in the book, including some new ones, and saved the world by printing unlimited amounts of money, expanded credit exponentially and abolished the cost of borrowing by setting rates at zero or negative. This is the perfect scenario and the Krugmans of this world must be really pleased since this justifies receiving the Nobel Prize and confirms that they have found the perfect method which can be applied indeterminately with great success.

- On the other hand, for the ones of us who believe that trees can’t grow to the sky and that sound money always prevails, we know that we are in the last stages of a bubble of epic proportions. Fortunately, our side has also received a Noble prize through von Hayek, although it was back in 1974.

This has been a very long battle between the manipulators and the advocates of sound money. With free money and socialism, you can fool most of the people for a very long time. But sadly for the Keynesians, they will run out of ammunition when all the printed currencies return to their intrinsic value of zero. This means you can’t fool all of the people all of the time. As Margaret Thatcher said: “The problem with socialism is that you eventually run out of other people’s money (OPM).” And this is exactly where we are today. The world has run out of OPM. When our company went aggressively into gold and silver in 2002 for our investors and ourselves, we did not believe that the central bankers would be able to manipulate markets for over 15 years. Still, silver was $4 at the time and gold $300, so the manipulation has only been partially successful.

But the signs are now very clear that the money printing experiment is coming to an end very soon. Despite all the trillions of monies created in the world, real GDP has stopped growing.

As the chart below shows, all the money printing and credit expansion is no longer having an effect. Even a child could understand that you can’t grow an economy by printing paper and calling it money but for some reasons, the Keynesians seem to ignore the obvious. 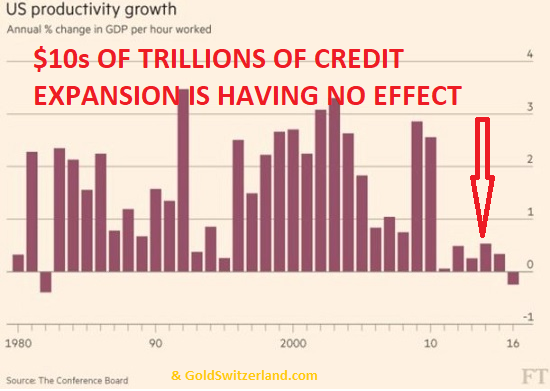 MONEY PRINTING HAS BENEFITED THE 1%

The only area which is still very strong is stock markets, property and bonds. This is where all the money printing goes and the 1% believe that their riches are exploding due to their investment skills. Little do they realise that these skills will just vanish into a big black hole in the next 4-7 years as the exploding assets implode and all the global debt with it. Sadly this must happen in order to create a sane world again. We cannot build a world on fake values and fake money. Mankind will not survive in such a world. It will totally destroy itself. It will be hard enough to survive the coming collapse of the Ponzi scheme that has flourished in the last 100 years.

The transition from a false system based on an illusion to real values and real money will be painful for most of the world. The wealthy will lose at least 95% of their assets and many normal people will starve and live in misery. We will have wars, civil unrest, political upheaval and economic devastation. This is what the elite has caused by creating a dishonest system for the benefit of the 1% but to the detriment of 99% of mankind. The problems we will see in coming years are likely to reduce world population by at least 1/3rd which is more than 2 billion people. The combination of wars, civil wars, famine, disease and economic collapse is likely to lead to this. World population has exploded from 1 billion to 7.5 billion in the last 160 years. Statistically there have always been setbacks in history when population has declined substantially whether it is due to wars or disease. During the Black Death of the 14th century for example, World population is estimated to have declined by 50%.

So the risks are major even though we are only talking about probabilities. Things could take longer and they could be less severe. But with risks of this magnitude, the very privileged few who have the possibility to take precautionary measures must do so. Because at some point in the next few years, a financial and economic collapse is inevitable.

GOLD HAS BROKEN OUT

The autumn of 2017 has for some time looked precarious. The question is what catalyst will pop the bubbles in markets and the economy. Stocks look very vulnerable and overvalued on any criteria. Even though bubbles can always grow bigger, the risk is now unacceptable. At the same time, gold and silver have now finished the long consolidation period since 2013 and resumed the uptrend to new highs.

EXPLOSIVE METALS IN THE AUTUMN

Moves in the metals could easily be explosive during the autumn. The strength the precious metals are now showing is a very strong indication that the manipulation by central banks, the BIS and the bullion banks is going to fail in the next few months.

I have previously pointed out that at current low demand, the entire mine production of gold and silver is absorbed. Less than 0.4% of global financial assets are invested in gold. The annual silver mine production of $15.5 billion is less than 0.01% of global financial assets. Since all gold and silver production is being easily absorbed currently, with negligible invest demand, there will be no physical gold or silver available at current prices for the coming increase in demand. In addition, the paper market in the precious metals is likely to have major disruptions and fail as the demand for physical metal increases. As institutions and funds start to focus on the physical precious metals and the PM stocks, they will only be able to invest at prices which will be many times higher than current levels. This is what will drive gold to my long-standing target of $10,000 and beyond. With a gold/silver ratio back to the historical level of 15, that would make silver $666. I believe that these levels can be reached in today’s prices and when hyperinflation takes hold we could see multiples of those levels.

If silver today was at the same level against the US monetary base as at the 1980 peak, the price would be 80x greater at $1,424. Although this sounds like fantasy today, it is not unrealistic. Just look at what is happening to Bitcoin. And remember that silver is real money whilst Bitcoin is just an electronic construction with no underlying asset. This won’t stop Bitcoin to go much higher in a Tulip bulb type mania. 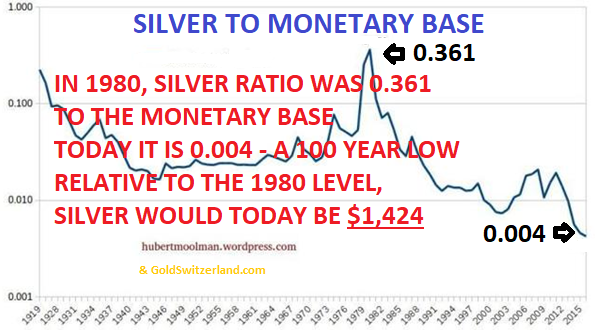 Technically silver is likely to outperform in the next few years. We have always argued that wealth preservation investors should hold gold mainly, due to the volatility of silver. But at this point, silver looks extremely good value so an exposure of say up to 25% silver and 75% gold would be an excellent mix.

THE GOLD AND SILVER UNIVERSE IS MINISCULE COMPARED TO TECH STOCKS

With annual mine production of $128 billion gold and $16 billion silver, this market is so small that it is totally dwarfed by the stock market. Just take some of the most well-known Nasdaq stocks, Apple, Google, Microsoft, Amazon and Facebook. Their total market cap is $3 trillion. Compare that to the annual gold and silver mine production ($143B) and the top 20 gold stocks ($150B) and the top 25 silver stocks ($30B). The total annual precious metals mine production and biggest metals stocks add up to $437 billion. That is only 15% of 5 of the biggest Nasdaq stocks and less than the smallest of those five which is Amazon, valued at $470B. Since these five stocks probably have topped, big investors will liquidate part of their holdings and look for new opportunities. The gold and silver universe is likely to get very crowded as funds and institutions enter.

Gold in many currencies bottomed in 2013. In dollars, the bottom was in 2015. After the rally in the first half of 2016 and the subsequent correction until December 2016, gold and silver are now on their way to new highs. We obviously will not see a straight line move as there will be temporary stops on the way. But for the ones who are not fully protected against major global risk, now is the time to be fully invested in gold with an important allocation in silver. Precious metals will become an extremely crowded investment sector and the time to get in at reasonable prices is soon ending.

This is a totally unique situation. Seldom has a protective wealth preservation investment also had massive capital appreciation potential. Don’t be left behind. There is too much at risk.