Gold jumped above $1,800, and it’s the disappointing jobs data that added fuel to the fire.

The gold market is a funny place. On Thursday (May 6), I complained that the yellow metal couldn’t surpass $1,800:

"The price of gold has been trading sideways recently as it couldn’t break out of the $1,700-$1,800 price range. This inability can be frustrating, but the inflationary pressure could help the yellow metal to free itself from the shackles."

And voilà, just later that day, the price of gold finally jumped above $1,800, as the chart below shows. Hey, maybe I have to complain about gold more often? 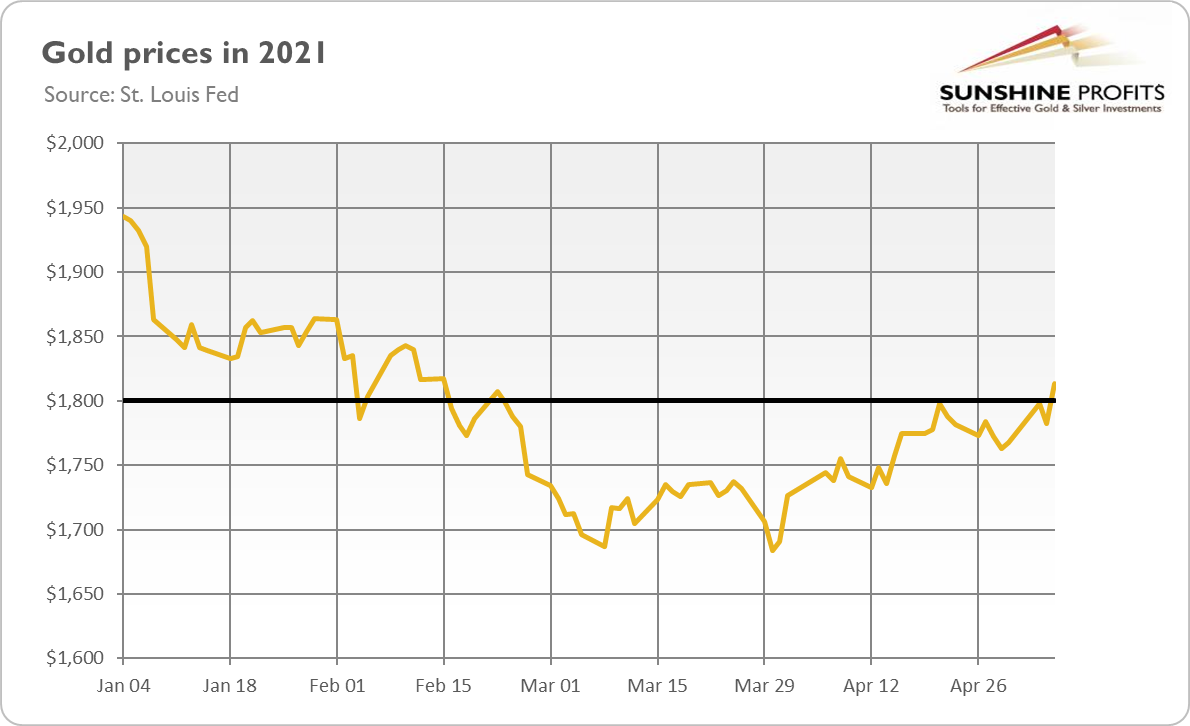 But jokes aside. The move is a big deal, as gold has finally broken above the key resistance level. What’s important here is that the breakthrough wasn’t caused by some negative geopolitical or economic shock, but rather by fundamental and sentiment factors.

So, what happened? First, there is a weakness in the US dollar. With global economic recovery progressing, the safe-haven appeal of the greenback is simply vanishing. Another issue here is – and I pointed this out in the Fundamental Gold Report dedicated to the latest ECB’s meeting – that the pandemic in the Eurozone has reached its peak. So, the worst is already behind the euro area, and it can catch up with the US now, supporting the euro and gold against the dollar.

Second, the bond yields have been heading lower recently. As one can see in the chart below, the real interest rates have corrected significantly since their peak in March. In early May, the 10-year TIPS yields slid further, returning to almost -0.90 percent. 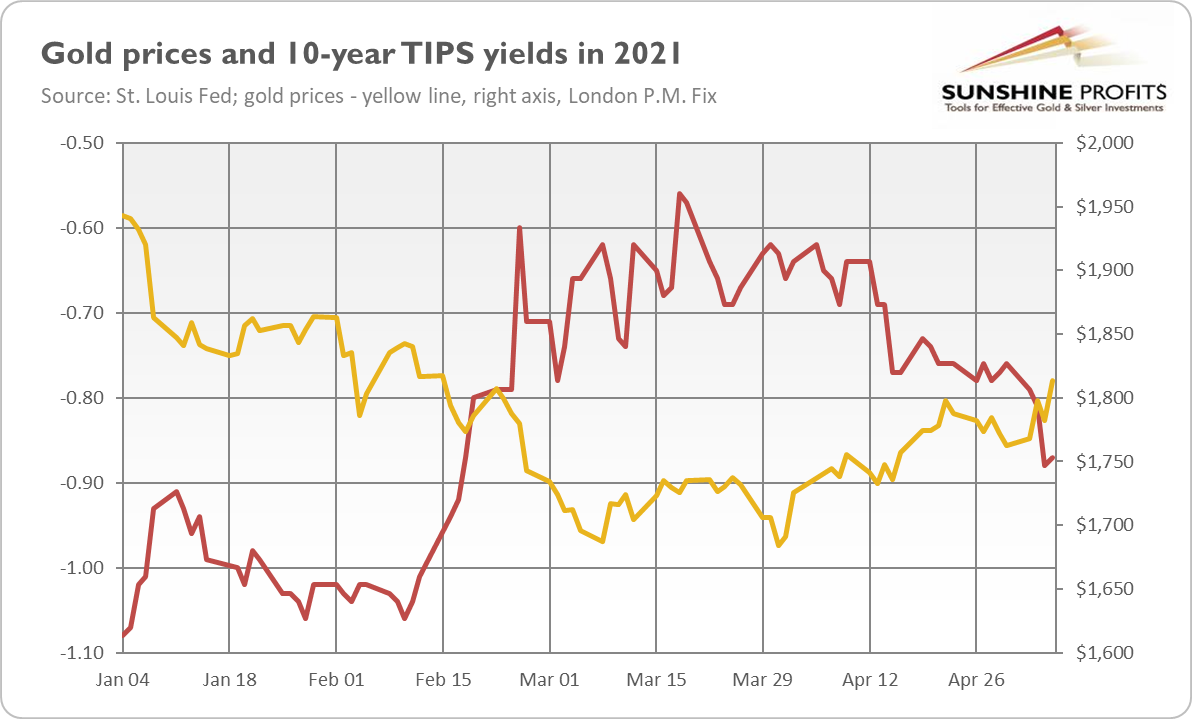 What is noteworthy here, the real interest rates declined more than the nominal interest rates. It resulted from the increase in the expected inflation. Indeed, as the chart below shows, the 10-year breakeven inflation rate jumped in early May. As a reminder, I wrote on Thursday that “the inflationary pressure could help the yellow metal to free itself from the shackles” and this is exactly what happened. 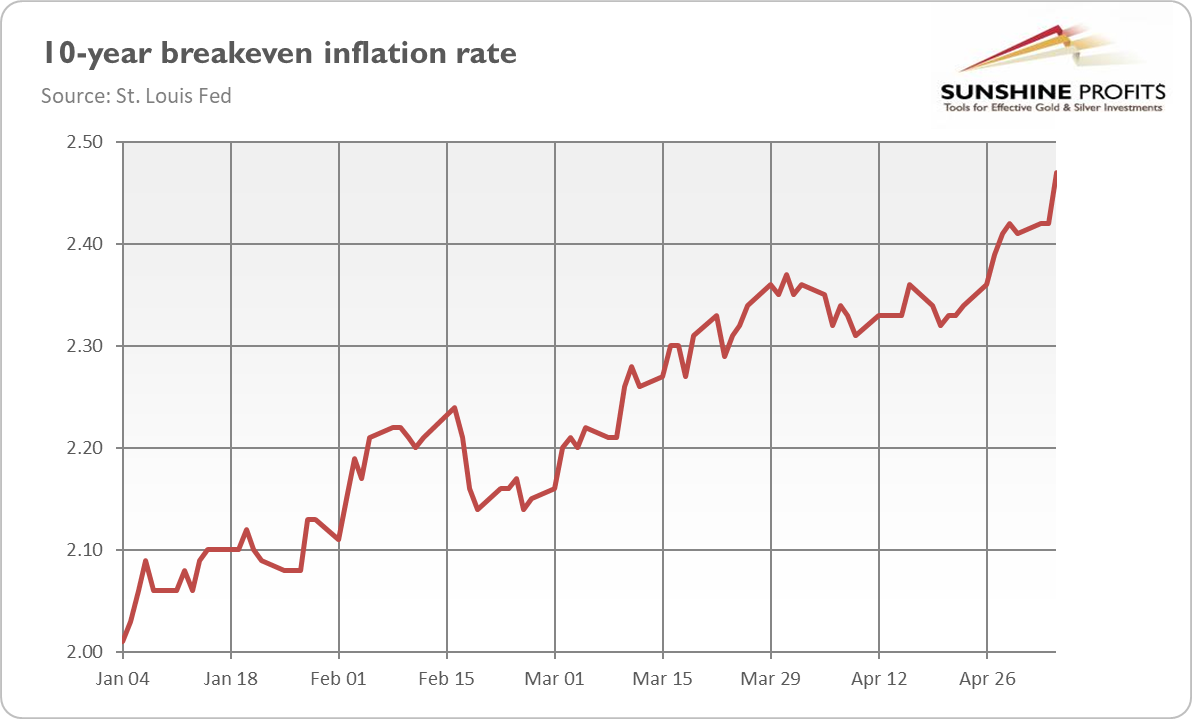 What does gold’s jump above $1,800 imply for its future? Well, the crossing of an important obstacle is always a positive development. The decline in the interest rates, coupled with the weakness in the US dollar, means that the markets are convinced that the Fed would remain very dovish, even despite the rising inflation.

Other positive news for the gold market is April’s nonfarm payrolls that came in below the forecasts. The US economy added only 266,000 jobs last month  (see the chart below), although many analysts and even the FOMC members expected a nearly 1 million increase in employment. Such a disappointment made traders slash the bets on the pace of the Fed’s monetary tightening. A softer expected path of the federal funds rate is a fundamentally positive factor for gold. 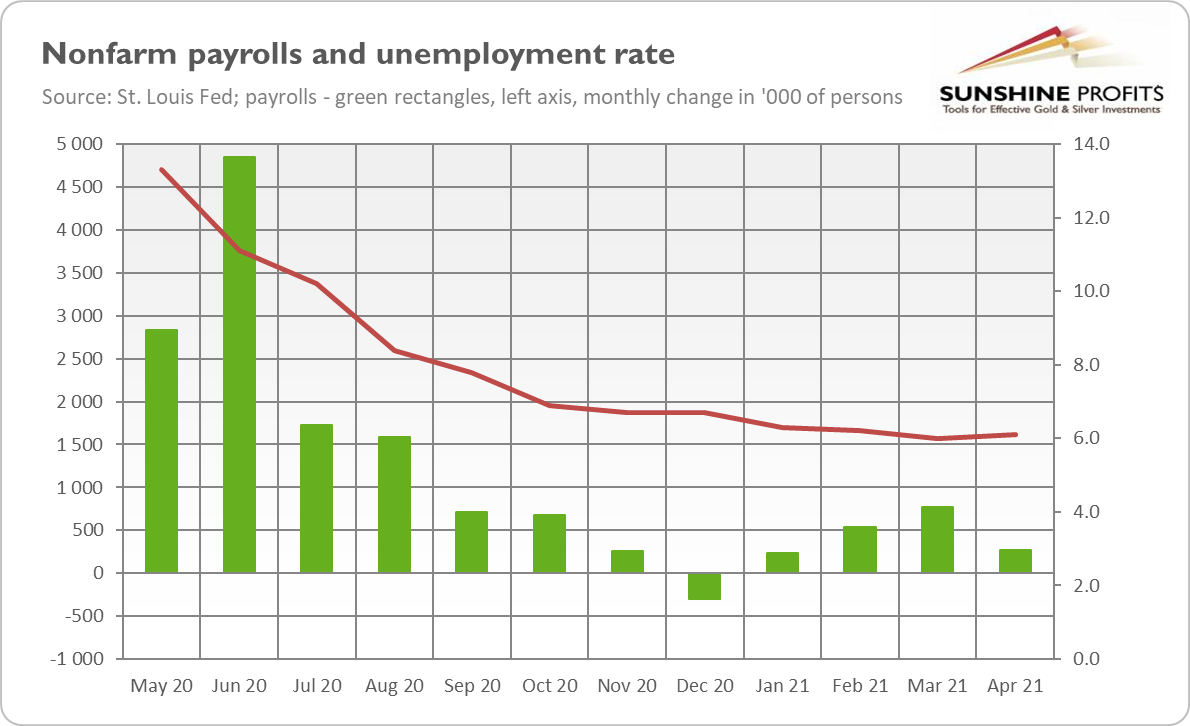 In other words, the weak employment report relieves a lot of the pressure put on the Fed to tighten its monetary policy. So, the US central bank will continue to provide monetary support, despite all the progress observed in the economy, and that easy stance will stay with us for longer than previously expected. In that sense, April’s disappointing jobs data may be a game-changer for gold, and it could add fuel to the recent rally that started on Thursday.

Of course, one weak employment number doesn’t erase the impressive economic recovery. Moreover, I would like to see that gold hold the recent gains through the coming days before organizing a party for the gold bulls. However, it seems that I was right in saying that the second quarter would be much better than the first one. Gold is indeed gaining momentum! And, what’s really important, the yellow metal started to rise amid a strong economic recovery – it implies that we can be observing important, bullish shifts in the market sentiment towards gold.