The months and years to come shall mark a radical change within the international monetary system, driven by China and the oil exporting countries.

China, after years of preparations, (with the help of intriguing gold price moves), just announced the programmed ending of the post-Bretton Woods monetary system. How so?

By launching futures contracts on oil denominated in Yuan before the end of this year... thus allowing oil exporting countries to be paid in Yuan in exchange of their oil – they can then buy physical gold on the Chinese exchanges in Shanghai and Honk Kong. Yuan-denominated gold futures have existed since 2016 – but these new futures contracts on oil denominated in Yuan are changing the picture: oil will be sold for Yuan that can then be converted into physical gold.

All this has been planned for years in silence (in the Western media, at least) through the setup of several platforms to allow a better convertibility of the Yuan internationally, as well as the signing of bilateral exchange agreements with commodities producing countries, Russia being the most important.

Many oil exporting countries that still do not trust the Yuan (or under the threat of American sanctions) will therefore switch to this new Chinese “system”, logically, in order to avoid using the dollar, and exchange their oil, first, for Yuan and, then, exchange their Yuan for physical gold. This will simply reintroduce physical gold at the center of oil transactions and, consequently, at the center of the international monetary system, by putting an end to the system that has given its power to the United States: the Petrodollar system.

An interesting coincidence: in the meantime, gold has officially exited a long bear market by breaking above the symbolic level of $1,300. 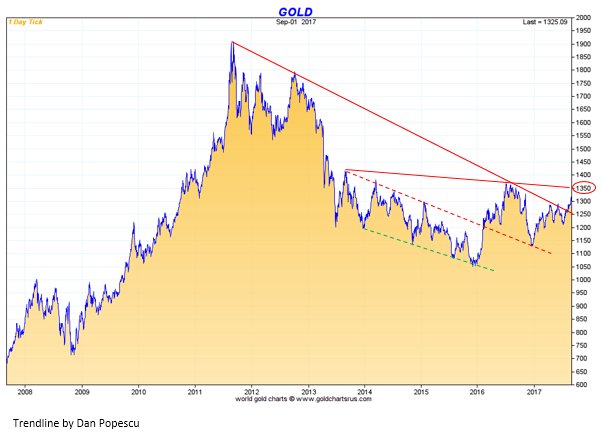 This bear market end may mean something important: all the major players, expecting a return of gold at the center of oil transactions, are from now on concentrating on accumulating physical gold, putting upward pressure on the price. It is likely that this accumulation will make it quite harder to "influence" the price than before.

If this manipulation actually ends, it will have played its role perfectly both by buying time for the Keynesians to benefit a little longer from unlimited money printing and by avoiding a gold rush by the depositors before the coming change in the monetary system.

We have therefore probably reached the limit of physical gold that Western countries were ready to let the BRICS accumulate. Could it be a tolerated redistribution of chips before an international monetary reset? It is hard to say if this redistribution was voluntary or not, but let’s remember that today, given the colossal level of global debt, almost every country on Earth would benefit from a revaluation of physical gold. Said revaluation would allow an increase in States’ liquidity, an extinguishing of debts and a new start from scratch without having to loot the depositors’ funds (bail-ins).

This announcement by China leaves little doubt as to the fact that the monetary system is about to change radically in the months and years to come.

No paper money (euro, dollar etc.) can rival physical gold on the long term. And this time, right before our very eyes, gold is taking back its place as a means of settlement for oil transactions and, eventually, as a reserve currency.

There is still time to prepare by accumulating physical gold before this window of opportunity closes, because these monetary changes will not take place without some perturbations. Our governments, if one is to judge by the different measures they are contemplating (exchange controls, account freezes etc.), seem to be preparing for some chaotic financial events.

Physical gold will be reintroduced in the monetary system, that’s for sure. But will that be done unilaterally via a reset organised by all the States, in which case a majority of savers will be taken by surprise, or will it be done in a more chaotic and conflicting fashion, with mandatory radical measures like bail-ins and exchange controls in order to maintain a semblance of monetary order?

Vacation is over for the dollar; it’s back-to-school time, and the new master’s name is Physical Gold.

French investor and entrepreneur, Fabrice Drouin Ristori is the founder and chairman of GoldBroker. He holds a Master degree in Entrepreneurship/Finance from the Kedge Business School (2004) and is the recipient of the 2003 Euro-Mediterranean Student Enterprise award. In 2007, he anticipates the development of online gaming industry in Europe and moves to Malta to found two companies there, which he sold in 2011. Passionate about finance, he has been managing his own investments in precious metals since 2008. In 2011, he creates the investment platform GoldBroker.com, which allows individual investors to hold physical gold and silver in their own name, without an intermediary, securely stored outside the banking system. In November 2012, he obtains the confidence of one of the most important Swiss fund managers for physical gold, Egon von Greyerz, who joins the advisory board of the company. Egon brings a long experience and expertise in strategy and investment.