Since the beginning of August, gold has been moving up, briefly crossing the $1,150 resistance level today, August 20. The London LBMA PM gold price was fixed at $1,147.70 today. 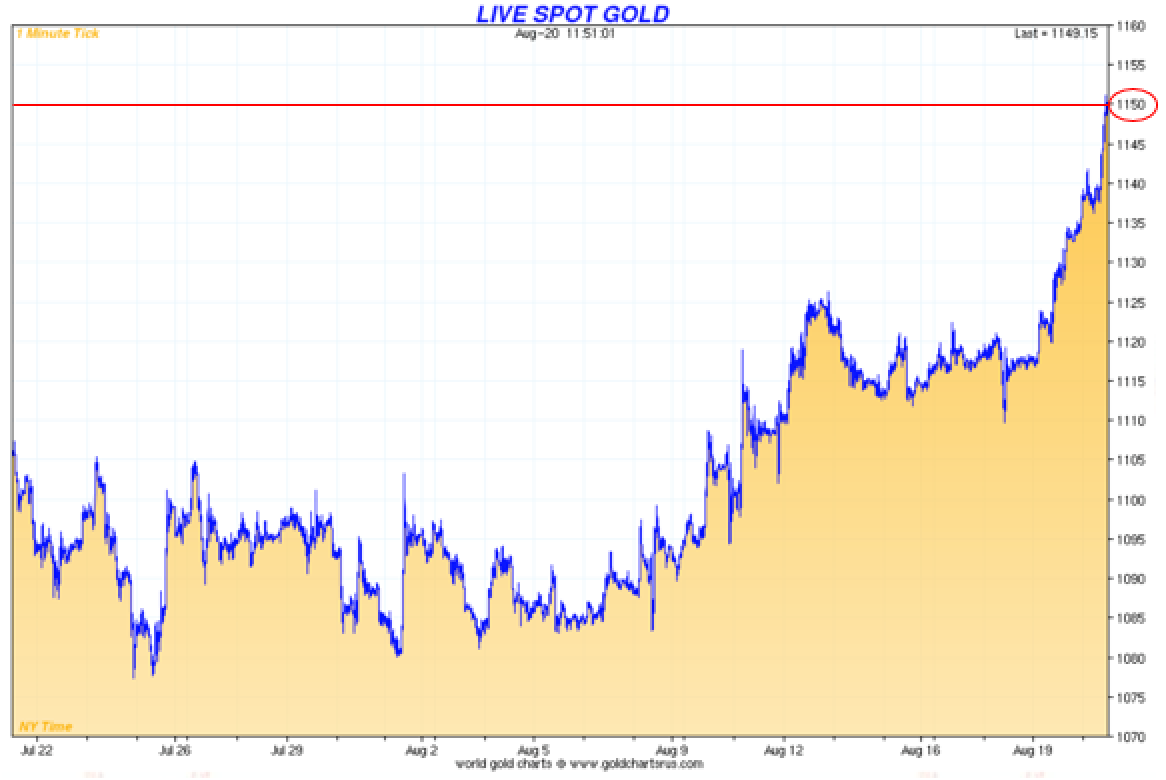 As for silver, it followed gold in a similar uptrend pattern since the beginning of August with a short collapse but total reversal yesterday. Today the London LBMA silver price was fixed at $15.50 and is testing the $15.60 resistance level. 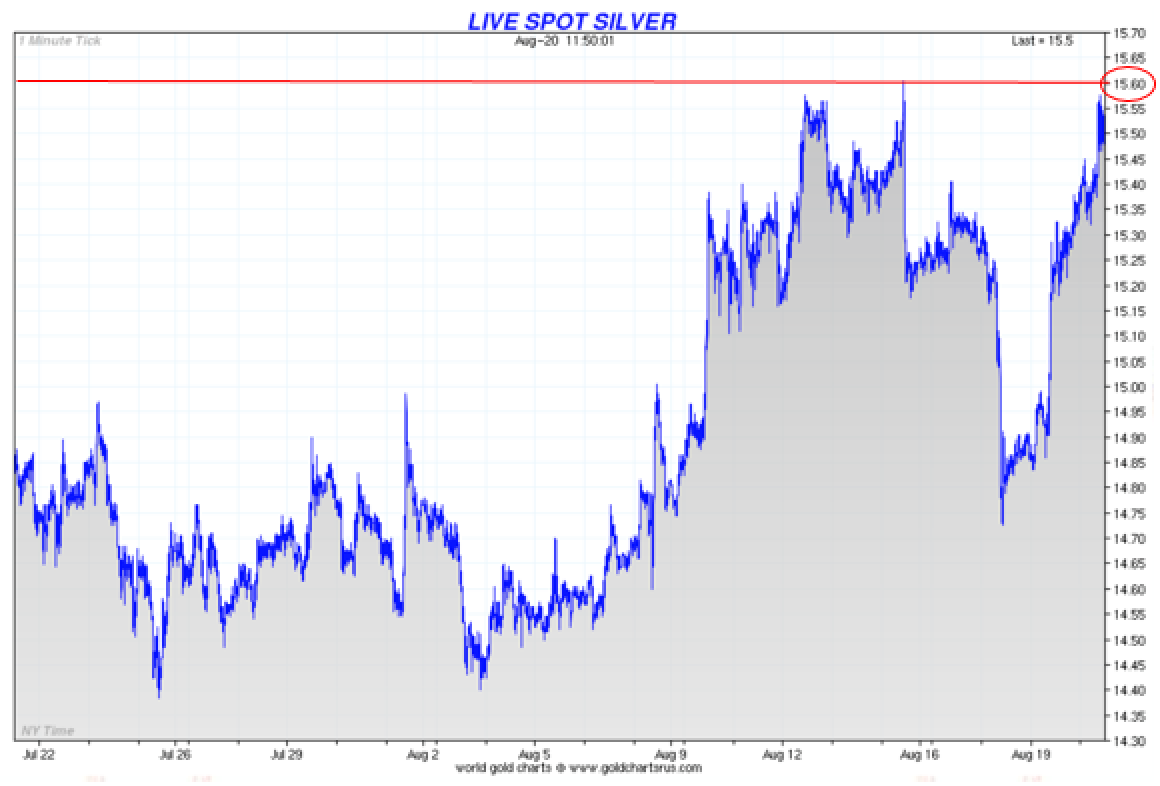 From a Reuters’ article, we learned that South Koreans are on course to buy a record amount of gold in 2015, worried that a meltdown in China's stock markets will destabilize South Korean equities and keen to replenish a traditional store of value in an era of low interest rates. Koreans have long seen gold as a store of value and a safe haven and are estimated to hold around 800 tonnes in households and private vaults. During the 1997/98 Asian financial crisis, the authorities launched a campaign to buy gold from patriotic individuals, selling it on to get dollars to bolster foreign reserves. Some observers speculate that China, can and plans to do the same if necessary sometime in the future and that that is the reason why it encourages its citizens to buy gold.

2. Traders Have Disappeared From the Gold Market

Bloomberg recently reported that traders have disappeared from the gold market as gold continues to languish near its lowest price in five years. Volume so far in August, already a slow time of year, has dropped about 8 percent from 2014. With fewer participants, gold’s volatility has tumbled to the lowest in nine months. The declines in volatility show that the “market isn’t that interested” in gold as “fewer people are trading it” according to Tai Wong, the director of commodity-products trading at BMO Capital Markets Corp. in New York. 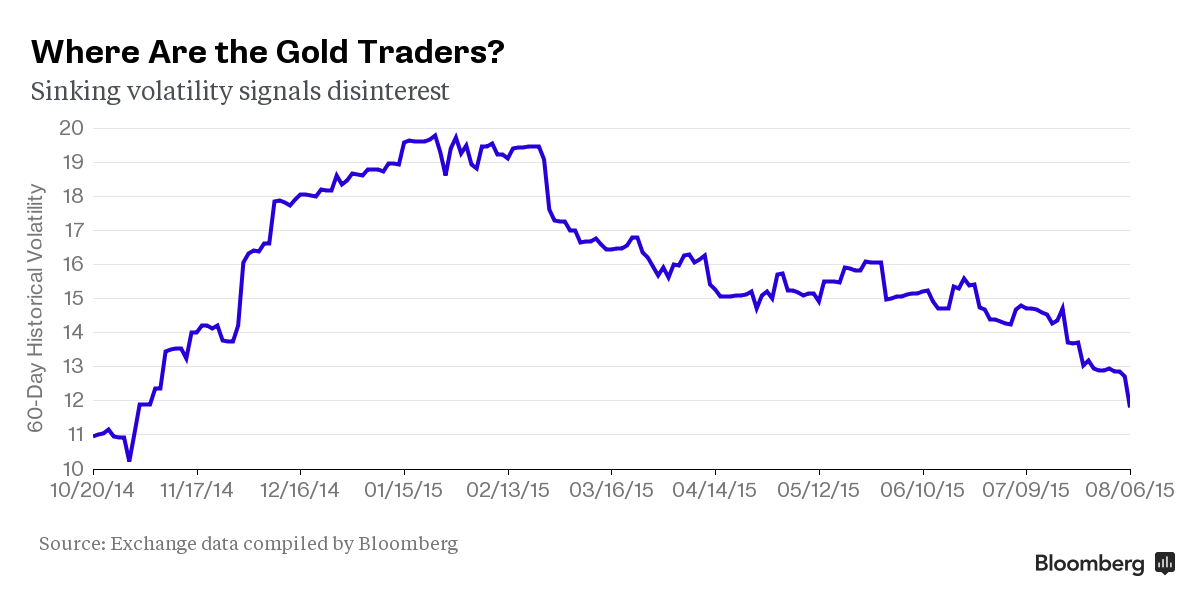 However, according to Nick Laird from Sharelynx.com, Volumes & Open Interest say otherwise.

Avery Goodman reports in an article on Seeking Alpha that both Goldman Sachs and HSBC recently bought 7.1 tonnes of physical gold while at the same time issued very bearish forecasts on long-term gold prices. According to Avery Goodman, the gold bars were not purchased for bank clients. They were purchased for the banks themselves since they are designated by the exchange as being for delivery to the bank's "house" accounts at COMEX, not to client accounts. However, according to Goldman Sachs and HSBC analysts the long-term outlook for gold is bleak. This would contradict their banks’ recent buying. Apparently, top Goldman and HSBC executives are "gold bugs" says Goodman. They do not apparently believe in the promises made by the gold ETF trust, or at least they are not willing to use the trust's shares as a substitute for hard metal bars. Physical gold is a long-term investment, everywhere and always, says Goodman. The banks are choosing to accumulate and hoard physical gold bars for a reason.

Gold jumped to a 3-week high after China raised the risk of currency wars by devaluing its currency by 3.9 per cent. "Currency wars", a phrase used by Brazil's former finance minister Guido Mantega in 2010 to describe how competing countries explicitly or implicitly weaken their exchange rates to boost exports, have intensified in recent years. As interest rates have fallen to zero in some developed economies and money printing has proliferated, exchange rate policy has become one of the few remaining levers to stimulate business activity and in some cases avoid deflation. So investors are now concerned that China may elect to keep pushing the yuan lower. Currency wars are considered positive for the price of gold.

India's gold demand in the second half of 2015 could rise by more than a quarter from a year before as lower prices encourage buying during the peak festival season towards the year-end according to the World Gold Council. Demand for gold jewelry is usually robust in the final quarter as the country celebrates festivals such as Diwali and Dussehra, when buying the metal is considered auspicious. Rural demand for gold accounts for nearly two-thirds of India's total demand.

6. Europe in crisis: everyone from Putin to ordinary savers are stockpiling gold

An article in the British newspaper The Telegraph reports that turmoil across Europe triggered a wave of gold buying. The increase in Europe was led by Germany, where sales of bars and coins rose 24 per cent to 24.1 tonnes in the second quarter. Demand in Austria and Switzerland also rose sharply. The Telegraph quotes Alistair Hewitt, head of market intelligence at the World Gold Council, who said that the European bullion market had gone from being "non-existent" to becoming the "world's leading bar and coin market", pulling ahead of India in the first half of this year. Many of the coins being bought are in smaller denominations, which the World Gold Council can contrast to the 2008 financial crisis, when there were larger denominations being bought. What this says, according to the World Gold Council, is that many of the people who were looking to gain exposure to bar and coin are the smaller retail investors.

Russia also has tripled its gold stocks in the last decade, which could provide Vladimir Putin, Russia's president, with ammunition to offset the sharp declines in the rouble. "Russia will continue to be a significant player in the global gold market in particular in central bank demand." Said the World Gold Council.

China's gold demand this year is expected to at least hold steady with last year at just under 1,000 tonnes and will not likely be dented by this week's currency devaluation, the World Gold Council said in a recent report. Yuan-denominated gold prices in China, the world's top consumer of the metal, spiked nearly 6 percent after the Yuan devaluation, boosted in part by investors seeking a secure store of value as their currency weakened, traders said. “Investors in China realize the special role of gold as a hedging tool against the devaluation of the currency," Roland Wang, managing director for the World Gold Council in China, told Reuters.

China's gold reserves rose by nearly 19 tonnes in July from June, the central bank said on Friday, disclosing its holdings for the second time in two months in a move seen as a Beijing bid to increase transparency. This indicates that from now on China intends to report its gold holdings every month. Previously it only reported its gold holdings every 5 years.

8. Central bank gold buying was 137 tonnes, the 18th consecutive quarter of net purchasing according to the World Gold Council.

Central bank purchases were slightly slower year-on-year but demand continues to flourish. Diversification, away from an over-reliance on currencies such as the US dollar, remains the key factor driving demand for gold from this sector.

Alan Greenspan, former chairman of the US Federal Reserve once said, “Gold is like a canary in the coal mine. It signals problems with respect to currency markets.” 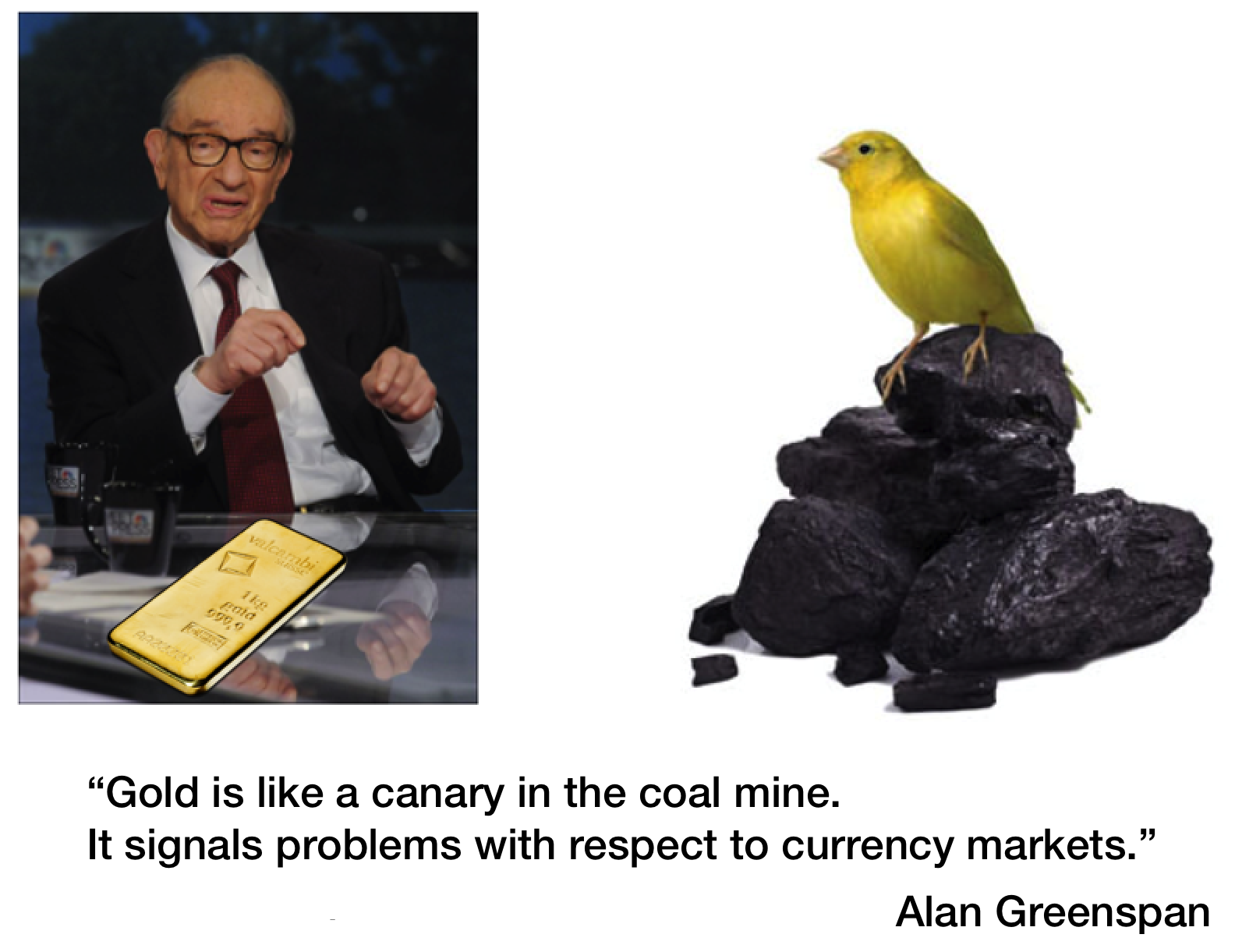