Gold surpassed $1,900 most recently – and it’s likely that the rally will continue for a while.

Gold bulls have an opportunity to celebrate. As the chart below shows, the price of gold has been rising recently. And yesterday (May 26) it finally jumped above $1,900, which is an important psychological level. 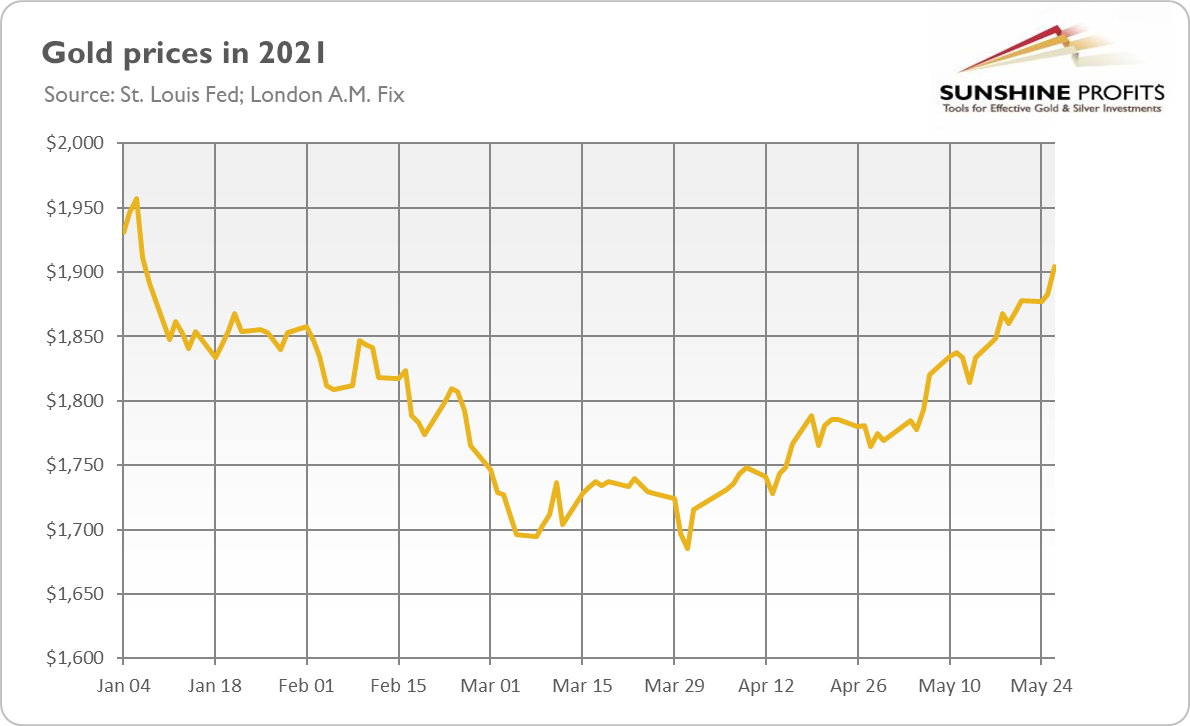 The question we should ask now is “what’s next?” Well, as the jokes go on, the price of gold will either go up or down. But in earnest, there are significant downside risks for the yellow metal. First of all, the Fed could overreact to rising inflation and increase real interest rates.

However, these worries seem to be overblown. The Fed’s monetary policy is always asymmetrical, i.e., it eases its stance in response to recession more than it tightens it in response to inflation. The federal funds rate gets lower and stays at these low levels for longer, partially because of all the enormous indebtedness of the contemporary economy.

The tapering is surely the risk that looms on the horizon. But the Fed will maintain its quantitative easing and zero-interest-rate policy for at least the rest of 2021. So, there is still room for gold to move further north, especially after the recent turmoil in the cryptocurrency market resulting in renewed confidence in gold as an attractive inflation hedge.

After all, the US monetary policy is loose, and real interest rates are still in negative territory. The fiscal policy remains very easy, and the public debt is high. Inflation is huge and rising. And there is also an issue of depreciation of the greenback. The Fed’s easy stance, low interest rates and high inflation weaken the US dollar, supporting gold prices.

Last but not least, the level of risk appetite/confidence in the Fed and the economy has already reached its peak, as the GDP has recovered with an unprecedentedly high pace of growth. In other words, the post-pandemic euphoria is behind us – now the harsh, inflationary reality sets in. Maybe we won’t repeat the 1970s stagflation, but inflation is probably more deeply embedded than the Fed thinks. And it seems that the markets are finally getting this idea, pushing some investors into gold’s warm and shiny embrace.

What does it all mean for gold prices? Well, recently two broad trends have dominated the markets: rising inflation expectations and rising economic confidence. In other words, market participants expected reflation. However, economic confidence has peaked, and now investors focus more on inflation. So, we are moving slowly from the reflation phase to the inflationary phase, which is beneficial for gold – if this trend continues, the yellow metal could continue its upward march.

Every investor should remember one great historical pattern, basically as old as the Roman Empire. The money supply is first aggressively boosted with the excuse that “there is no inflation”. When upward pressure on prices becomes clear, that excuse transforms into “inflation is transitory” or into “the rise in inflation is caused by idiosyncratic factors”. Have you heard about Arthur Burns, the Fed Chair in the 1970s and the predecessor of Paul Volcker ? As Stephen Roach notes on him:

Over the next few years, he [Burns] periodically uncovered similar idiosyncratic developments affecting the prices of mobile homes, used cars, children’s toys, even women’s jewelry (gold mania, he dubbed it); he also raised questions about homeownership costs, which accounted for another 16% of the CPI. Take them all out, he insisted!

Finally, the officials admit that there is inflation, but they blame it on speculators and other external, unfavorable or even hostile factors. To be clear, I’m not predicting hyperinflation or even double-digit inflation in the US, but recent economic reports suggest that upward price pressure could be more lasting than the Fed and the pundits believe.

So, inflation could remain elevated for a while, especially given that the description of Burns downplaying it is worryingly similar to the current Fed’s stance under Powell. As Stephen Roach points out, the current size of fiscal and monetary stimuli is unprecedented, especially taking into account the pace of the recovery:

Today, the federal funds rate is currently more than 2.5 percentage points below the inflation rate. Now, add open-ended quantitative easing – some $120 billion per month injected into frothy financial markets – and the largest fiscal stimulus in post-World War II history. All of this is occurring precisely when a post-pandemic boom is absorbing slack capacity at an unprecedented rate. This policy gambit is in a league of its own.

Indeed, but gold loves chess, gambits included. After all, chess is a royal game, while gold is a royal metal!