It should and will come as no surprise that fundamentals like valuation basics and sane credit levels have left the building (and securities markets) for some time.

Today, we literally invest (i.e. buy and sell) in a veritable market Twilight Zone beyond sight, sound, reason and, well…earnings, profits and cash-flow. 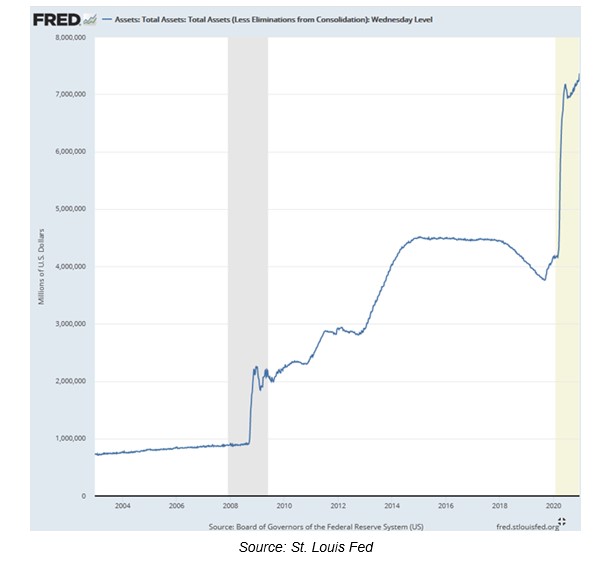 That is, gobs and gobs of printed dollars (of which the FOMC has promised more this week) keep banks artificially liquid, bond prices artificially bought/high, yields artificially repressed and thus rates (i.e. the cost of borrowing) stapled to the floor of history.

But as the Austrian School reminds, cheap debt leads to debt binging, and debt binging leads to very bad things… 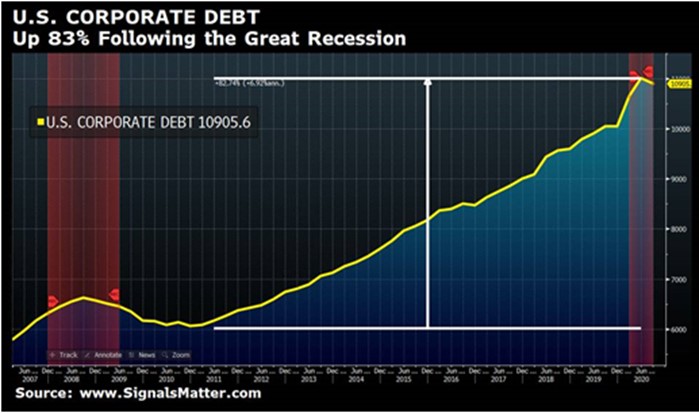 Corporations chase cheap debt almost as much as college kids seek discounted beer, and use it just as dangerously—i.e. to buy-back their own shares or issue dividends with borrowed dollars, make no profits and then call themselves “recovered” as their stock prices fly, literally, on borrowed wings.

Many, in fact 15%, of these debt-drunk enterprises are walking dead “zombies” who borrow at advantaged rates just to pay yesterday’s interest and have no chance at all of ever repaying the principal.

These zombies, however, are just one member of an over-all embarrassing club of U.S. corporate bond issuers, 67% of which are rated at or just a pinch above junk, high yield or levered loan status—namely the very bottom of the credit barrel. 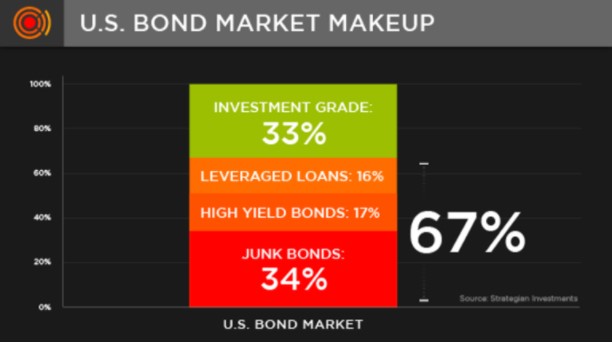 From Bad Bonds to Inflated Stocks: Just Do the Math

But when not issuing IOU’s to stay alive, many of those same enterprises are passively riding a stock market wave above jagged rocks of broken balance sheets hidden just beneath the waterline.

And as for modern balance sheets–do they or any other rule of math and common sense even matter anymore in this new Twilight Zone?

Toward that end, I’m thinking of those pesky items of the ancient past like earnings, profits, cash flow, book value etc.

And yet buyers are crowding in for more, buying at (and chasing) frothy tops like sheep following a mad herdsman.

Speaking of mad crowds and their even madder herdsman, Citigroup is forecasting an S&P at 3800 for 2021 while JP Morgan and Kantor Fitzgerald are anticipating 20% surges from current stock valuations for the coming year–pandemics, recessions and unemployment levels be damned.

But let’s pause and consider (for the sake of brevity) just one of the many 100th percentile metrics of market overvaluation—the infamous price to operating earnings ratio.

It’s worth noting that current PE ratios for the S&P are now where they were just before the infamous bubble-popping of 2001 and even higher than where they stood before the great rise of 2008 made history as the Great Financial Crisis of that same year: 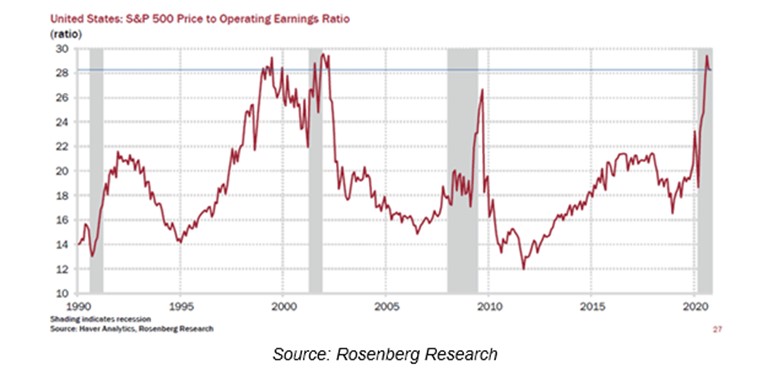 Look a little scary to you?

What’s particularly eerie is just how fast those ratios (i.e. metrics of gross over-payment) have climbed since the market tanked in March of this year.

Folks, it’s not as if earnings were rising by double digits because valuation was rising at the same pace.

If we look at actual earnings per share data, they confirm that earnings today are where they stood in 2018 when the market was valued much lower.

This means today’s (and tomorrow’s) investors are literally riding such an optimistic high that they are openly (and likely unknowingly) paying 35% higher prices for the same companies whose earnings have not risen for the same period.

Furthermore, earnings per share data has been totally distorted by trillions in corporate stock buy-backs, which means investors are paying far more than even these staggering percentages confirm.

So, what gives? What’s going on? How did things get this crazy?

In simple terms, we are witnessing a mania, and manias, like viruses, can last for a long time.

Mania’s moreover, have less to do with valuations and math—i.e. PE ratios and bond yields—and more to do with psychology, a topic absent from most Wall Street (and even Main Street) reading lists.

Looking at past manias and bubbles, we know that maniacal investors always pile in together on the buy-side, ignoring valuation sobriety until they are forced to—i.e. when it’s too late.

We also know that market manias often have no correlation to underlying economic conditions, and thus markets can thrive while economies (as now) are literally gasping for air.

In fact, manias typically gain speed rather than tire out as markets pierce resistance levels and reach new, record-highs, seemingly, with each weekly headline and despite every red flag from traditional valuation metrics.

Confidence follows headlines, and headlines create crowds, and crowds follow each other (and the sell-side)—right up to, and then eventually, right over a market cliff.

Psychologists, for example, would remind that a cognitive bias often occurs in bull markets wherein individuals of a low ability at a given skill begin to overestimate their abilities due simply to an “inability to face their inability.”

This often takes place when investors are enjoying a trend (or mania) rather than genius or fair price discovery.

The fancy lads call this psychological phenomenon the Dunning-Kruger Affect, and I’d contend that many self-smug Fed Chairs and wealth advisors, as well as many investors, are suffering from it now as they passively enjoy (and take credit for) a maniacal market rise.

This disease of false confidence spurred by false (i.e. artificial markets) is particularly the case for Janet Yellen, who is now heading from the Fed to the Treasury with much applause.

Ah, how the ironies do abound. When it comes to monetary discipline, Yellen at the Treasury makes as much sense as Madoff at the SEC.

And no, this time is not different. It’s worse.

The level of current mania (Tesla to Bitcoin) surpasses prior bubbles, and the depth of the debt and economic (as well as political) weakness beneath it is now greater than prior recessions.

With global debt now at an unprecedented $280T and combined corporate, household and consumer debt in the U.S. now at $80T, this in no time for losing one’s mind (and portfolio) to the buzz of yet another Fed-driven mania.

In short, the Twilight Zone market is colliding with a Perfect Storm (psychological, financial, social, political).

All markets revert to the mean. It’s a law of markets as real and natural as gravity is to the laws of physics.

And math, as well as natural market forces, like the laws of physics, still matter.

Together, these forces stand in the background rubbing their hands as maniacal investors go all-in to chase a market top that would make the Matterhorn blush.

By example, math reminds us that the median PE ratio for the S&P is 17. Today, that PE ratio is a jaw-dropping 30.

Once (not if) this market reverts to its mean (as all markets do), this would place the S&P closer to 1500 or 2,000, where the real value investors can start buying the bottoms rather than these dangerous tops, now poised to needle-peak further before they tank. 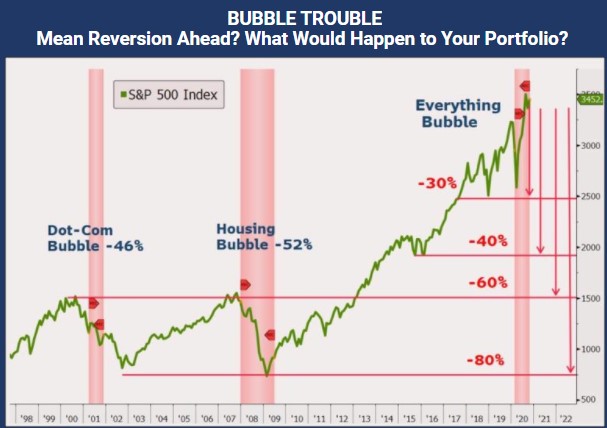 But as we also know, and after years of addiction to Fed “accommodation,” whenever and however markets begin their next implosion (typically on some headline scandal or event), the Fed will crank out the money printers and deliver more fiat dope to markets suffering “the needle chill.”

Global money supply, now at a staggering $6.5T, is only going to shoot higher, as central banks shoot more steroids into a system which they helped corrupt, debasing currencies with blind elan as markets inflate on the backs of fiat dollars and unpayable, rotten debt.

As always, all rivers and informed market conversations eventually turn toward physical gold, often castigated as a “barbarous relic” in times of market mania and then no longer available/affordable when desperately needed in times of market pain.

In short, those who were once chasing tops suddenly find themselves looking for a safe and precious place to land when there’s nowhere left to hide.

Such cycles remind us of our youth and the tale of the three little piggies and the big, bad wolf.

In that childhood fairy tale, two piggies, enjoying all the blissful ignorance of the Dunning-Kruger Affect, are too busy playing to worry about a big, bad wolf around the corner.

Thus, they build their huts of straw or mud while the third little piggy, all too aware of that big, bad wolf, diligently builds his home of bricks.

When the wolf comes, guess which hut is left standing?

Of course, the same is true of weak and strong portfolios and the big, bad market wolves of debt, over-valuation and risk asset bubbles: Some investors are prepared, but most are sitting on straw and mud.

When risk assets are slaughtered by the wolf’s fangs of 1) needle-sharp debt, 2) gross equity over-valuation and 3) fatal currency debasing policies like “unlimited QE,” only those investors who built their portfolios on a foundation of physical gold are left standing.

Because unlike the straw and mud of fiat currencies and dangerously overvalued stocks and bonds, gold rises strong (rather than falls into dust) when the market wolf huffs and puffs and blows bad portfolios down.

Smart money, like just about anything smart, including that third little piggy above, are by nature a smaller circle, a more far-sighted minority, and thus think more of steady wealth preservation than easy wealth creation.

In short, the smart money understands the difference between staying rich and getting rich.

Physical gold, as a timeless (rather than trendy or passẻ) instrument of wealth preservation, serves as the historically-confirmed and surest way to ensure one’s wealth against the ravages of currency debasement.

For those who refuse to see such facts, the following chart is worth repeating as much as possible, and makes such warnings obvious rather than theoretical: 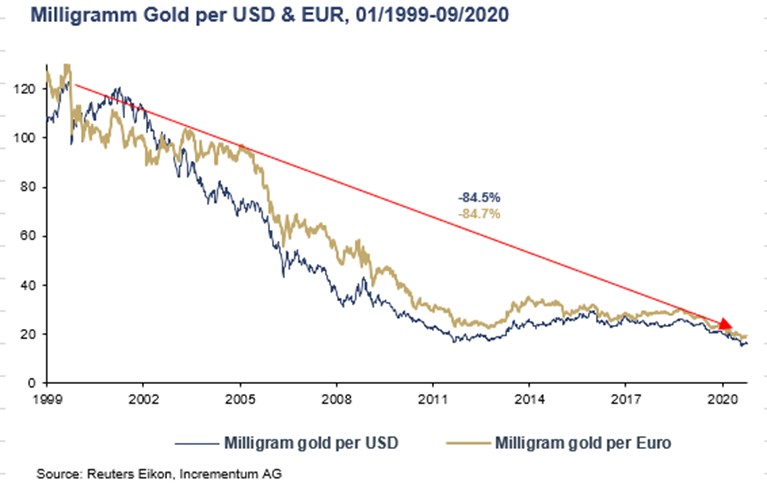 And so, as central bankers and consensus-thinking investors maniacally continue to build markets, currencies and portfolios of straw and mud, will you be joining that crowd or looking for some gold bricks upon which to preserve your wealth?