Market Volatility in 2015 Will Go Wild

On January 15, the Euro lost 30% against the Swiss Franc and the Dollar lost 25% in a few seconds. All stops in the market will have been triggered at the maximum loss level. At the end of the day the decline settled at around 15% for both the Euro and the Dollar.

Many hedge funds will have made considerable losses and also several banks. One Forex broker at least went under and several will have suffered irreparable losses.

Although this event was not major enough to shake the world it will be another nail in the coffin of the vulnerable financial system, as well as a sign of the exponential rise we will see in volatility and market failures during 2015. 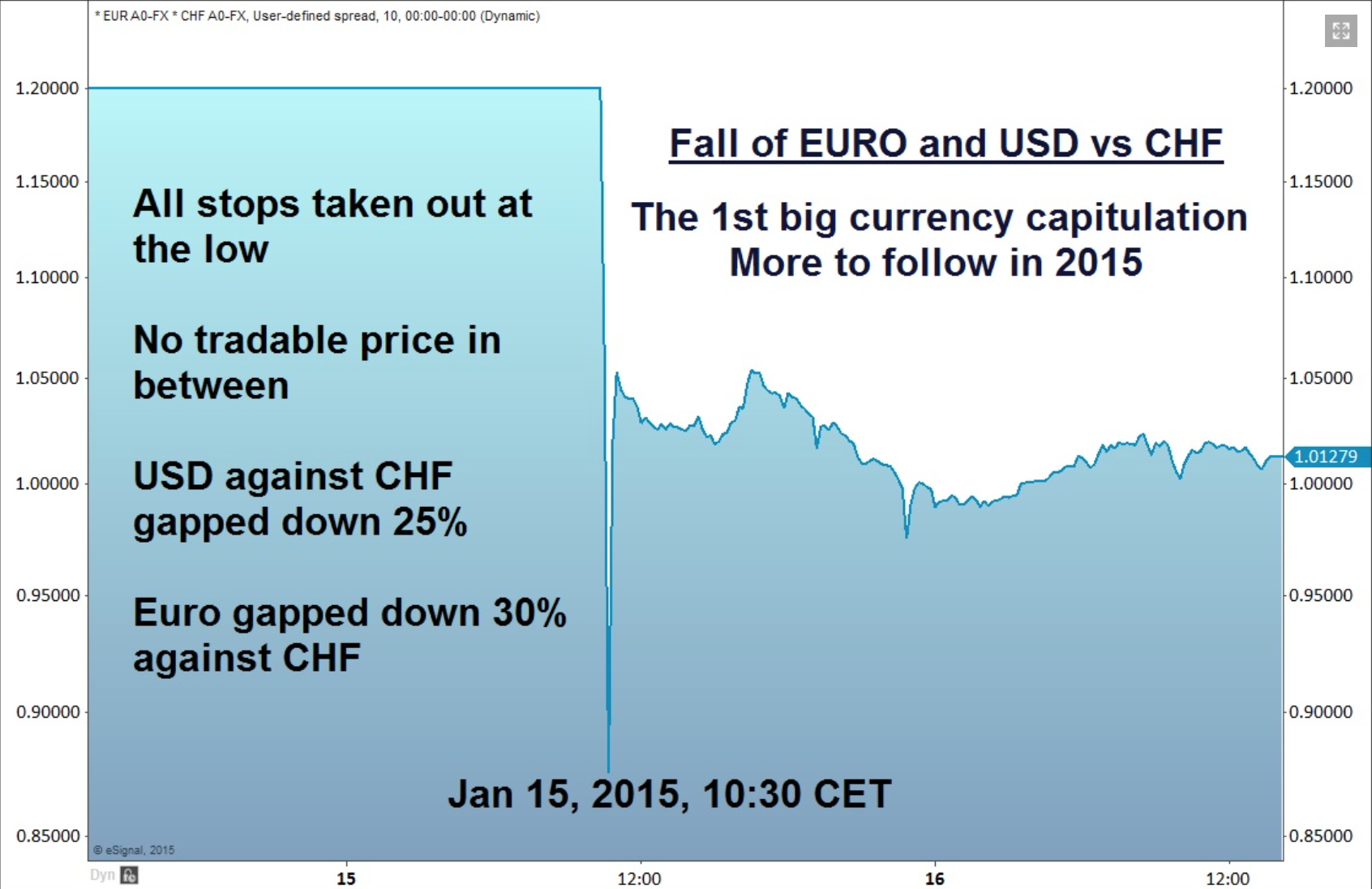 The triggers for major changes in history always seem insignificant at the time. This was the case with the shot in Sarajevo or the fall of the Creditanstalt in Austria. The shot in 1914 was the catalyst for WW1 and the failure of the Austrian bank in 1931 the beginning of the 1930s depression.

It is hard to say today what in history will be seen as the catalyst for the worldwide downturn that is now about to start not just in the economy but also politically, geopolitically and socially. And this will not just be a temporary cyclical downturn but a secular downturn that could last for decades or even longer.

The creation of the Fed in the US in 1913 was the start of the final bubble phase that would end with a collapse that is likely to make the world a lot less of a happy place to live. Economic and financial collapses will be next and so will a breakdown of social structures with civil wars. We are also entering a critical period for wars with war cycles indicating major conflicts starting in the next few years.

Economic serfdom for the masses

So we are now ending a century when bankers and the elite have created massive power and wealth for themselves but only economic serfdom for the masses with a colossal debt burden.

The private bankers who formed the Fed in 1913 knew what they were doing. They took control of the US financial system and eventually of the world financial system. They followed the “wise” words of their mentor Mayer Amshel Rotschild: “Give me control of a nation’s money and I care not who make its laws.”

We now live in an unreal world based on unreal money to the extent of $300 trillion of debt and printed money plus over one quadrillion dollars of worthless derivatives. This has created unreal asset values but also unreal people whose primary desire is to dominate the world. But we know that unreal things do not last, whether it is a £200 million flat in London or a bonus for a Wall Street banker of $100 million.

Real wealth cannot be created by printing worthless pieces of paper. If that was the case we could all stop working and just print money. For the originators of a Ponzi scheme it works if you stand nearest the source or the printing press. This is why the bankers and the elite have amassed unreal amounts of paper wealth in the last few decades. During the next few years or decade we will see a wealth destruction and asset implosion of proportions which today are difficult to imagine.

But central bankers and governments will not give up easily. Before the implosion of the financial system, we will see massive money printing worldwide. This is the only tool that central banks have left to postpone the inevitable. But the art of pushing on a string is now becoming impossible to perform for the central banks. QE is likely to start next week by the ECB. Later on the Fed will follow assisted by the IMF. And the bank of Japan will continue to do what they can until the Japanese economy sinks into the Pacific. The Chinese financial bubble will also create major problems in their banking and shadow banking system that could lead to not just economic unrest but also social unrest. The result of all this money printing will be collapsing currencies worldwide. Within the next few years most currencies will finish the move that started in 1914 and eventually reach their intrinsic value of ZERO. Historically a collapsing currency has always led to hyperinflation and this is what we will see in many major economies in the next few years including the USA, EU, UK, Japan etc.

The currency wars are now in full force and the Swiss National Bank (SNB) yesterday confirmed their incompetence by capitulating. This was of course inevitable. During the Swiss Gold Initiative I predicted this. In a TV debate I also told the former SNB President Jean-Pierre Roth that this was the likely outcome but in the pompous manner of a central banker he just ridiculed our side as incompetent apprentices. As expected, Roth didn’t get the last laugh. On Dec 1, 2014 I wrote a fictitious memo from Thomas Jordan (I called him Jomas Thordan) to the SNB board in which the board was informed that the policy of the SNB would lead to massive losses and the collapse of the EURCHF peg. This is quite and entertaining and also totally accurate memo.
Here is the link: http://goldswitzerland.com/internal-memo-from-jomas-thordan-president-of-the-national-bank/

We don’t know the final losses of the SNB on their forex positions of CHF 500 billion but it is likely to be at least CHF 80 billion which is more than 10% of Swiss GDP and a major disaster for the country. Add to that a Swiss banking system which is 7 times GDP, which is in line with Cyprus before their banks collapsed. This is likely to necessitate more money printing relatively in Switzerland than any major economy. Thus the current strength in the Franc is ephemeral and Switzerland will soon be a major contender in the race to the bottom of the currencies.

So will relinquishing the EurChf peg be seen as the catalyst for the world’s coming financial collapse, or will it be the fall of the oil price or Russia or Japan or China or the Middle East or war in Ukraine or a major bank failing or the one quadrillion derivatives exploding or …………? Well, the list is endless and it is impossible to predict what the catalyst will be. What is certain is that there are enough catalysts to cause the coming crisis. Many people will use similar words to the former SNB President and call us “incompetent apprentices” or just prophets of doom and gloom. Sadly, and I mean sadly, we apprentices or doomsayers will have the last laugh because we are now facing a very different world.

It will of course be impossible to protect yourself against all these calamities. But what is certain is that the price of physical gold (held outside the banking system) will reflect the destruction of wealth and paper money that is coming and will act as financial insurance. Gold and silver have now finished the correction since 2011 and have started the move to new highs. Eventually the metals will reach levels which are unthinkable today.