In the newspapers, one can read a lot of stupid things about gold. They say that gold needs inflation in order to go up. They say that gold moves in an opposite direction to the dollar. Those things are true sometimes, but not always. There is no mathematical relation between the two.

They say that gold gains from negative real interest rates... True. But why are they negative? Because we are going through a corrective crisis period from the preceding cycle, and because central banks are trying to boost the economy with floor-level rates, under the rate of inflation.

They say that gold gains from monetary printing and that if the Fed’s monetary press slows down, that should push the price of gold down. But if that’s the case, why didn’t gold gain from the enormous increase in the monetary mass between 1980 and 2001?

Because the financial wizards of debt money were able to kick the limits of the system further down the road before the debt hit a wall and the first cracks started to show. The correction cycle hadn’t started yet, but everything was noted and was accumulated until the bills were due, starting around 199-2001.

If one is wrong about the cycle, one is wrong about the investment. You could have bet all you wanted on gold in 1995, but even though its just theoretical price should have been $1,281, it desperately lingered at $380. And the current correction cycle of the Western economies has awakened the price of gold... and gold recuperated its full value with all the excesses being purged out of the preceding cycle, which is far from being the case today!

I think the dollar will enter its terminal phase as the world reserve currency in 2015 and that the Fed won’t be able to do anything to save it since, contrary to the ‘70’s correction cycle, it won’t be able to massively raise interest rates as it did then. Gold will then enter the final phase of its bull market. The Fed might have to speed up its printing presses, and the theoretical price of gold might largely surpass $3,400... 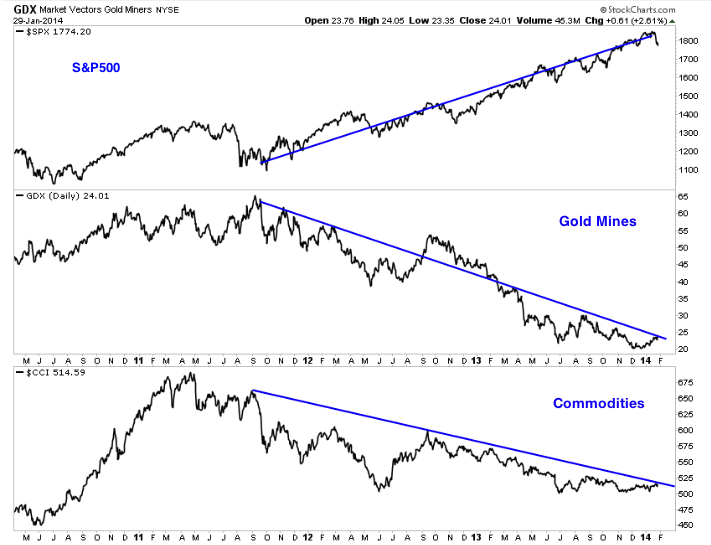 In 2008, gold and gold miners were going in the same direction as the stocks since 2003, but since 2011, they are moving in opposite directions. In 2008, some hedge funds and many weak hands were playing bullish on gold, while in 2013, not only hedge funds and weak hands have been ejected, but they’ve taken massive short positions on gold! That makes me think that there is no risk for gold and gold miners to be drawn in a new race for cash, like during the crash of 2008.

At that time, gold had suffered from two opposite forces : smart money buying (long-term oriented), by virtue of its safe haven nature, and at the same time, massive selling by speculative actors being called on their margins and having to garner more liquidity in order to remain solvent in a market going against them. At first, gold and gold miners had fallen heavily because of those forced liquidations, but they quickly recuperated their losses afterward.

If the stock market were to plunge, this time, it would be directly bullish for gold, with those who sold it in 2013, thinking the crisis was behind for good, wanting to get back into their positions. And what’s more, the speculative funds positioned to take advantage of a falling price of gold (and there are plenty of them!) should reverse their positions in an emergency and would therefore, in spite of themselves, contribute to feed the rise, possibly helping to bring about a short squeeze, a devastating wave for all those who are short. 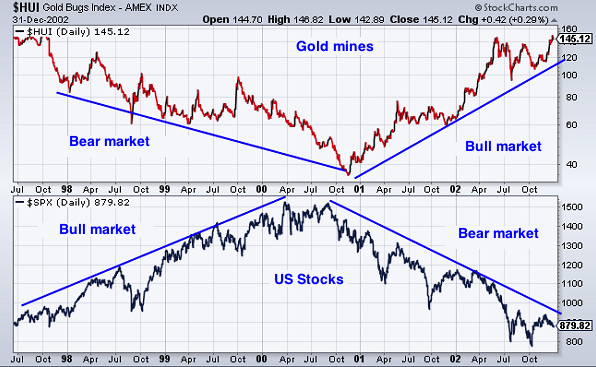 The period that can be best compared to the current situation is the one of the bull market in stocks that ended in 2000. We can clearly see that, when the reversal took place, the gold miners went their own way, even though they were « stocks ».

>> READ PART 5: THE TROUGH OF THIS INTERMEDIATE BEAR MARKET HAS ALREADY BEEN REACHED