Rising Cost Pressure - What Will Mr. Powell and Mr. Gold Do?

On Friday, the recent IHS Markit Flash U.S. Composite PMI has been published. There are two pieces of news for gold - one good and one bad. Let’s start with the negative information. The report signals an unprecedentedly fast expansion in business activity in May. Indeed, the composite index surge from 63.5 in April to 68.1 this month established a new record.

More importantly, both manufacturing and services sectors’ markets have shown strong growth. The former index rose from 60.5 in April to 61.5 in May (also a new record), while the PMI for services soared from 64.7 to 70.1, marking the sharpest jump since data collection for the series began in October 2009. Such an unprecedentedly fast acceleration of growth in the PMI signals strong economic growth, which is clearly bad news for the safe-havens such as gold (however, strong economic growth is something everyone expected, so it might be already priced in as well).

The good information is, however, that at least part of this growth is inflationary, as soaring demand greatly improved the firm’s pricing power. And the input costs have surged, leading to the sharpest rise in output charges since the end of the Great Recession when the data collection started:

The steep rise in costs fed through to the sharpest increase in output charges since data collection began in October 2009, with record rates of inflation registered for both goods and services as soaring demand boosted firms’ pricing power.

What’s more, wage inflation is also coming, as the report says that entrepreneurs couldn’t find people to fill the vacancies. It seems that generous benefits introduced in a response to the recession discouraged people from searching for work, and slack in the labor market is greatly exaggerated.

Although a solid expansion in staffing levels eased some pressure on backlogs in the service sector, manufacturers registered the fastest rise in work-in-hand on record amid raw material shortages. While job creation was again seen in the goods-producing sector, the rise was the slowest for five months, linked in part to difficulties filling vacancies.

In other words, the post-pandemic natural employment will be simply lower because of the institutional changes, not because of weak aggregate demand. How would you explain otherwise the fact that entrepreneurs cannot find workers amid employment lower by 8 million when compared to the pre-pandemic level?

But this is good news for gold. The subdued employment would be a great excuse for the Fed to say that there is slack in the labor market, the aggregate demand is weak, and the economy remains fragile and below the Fed’s targets, so it still needs easy monetary conditions. Hence, Powell would stay passive and would even avoid starting to think about tapering the quantitative easing and hiking interest rates. Dovish Fed and rising prices would support gold prices.

So, high inflation (see the chart below) should remain with us for a while. Indeed, manufacturers worry that raw material shortages “could extend through 2021” and producer price inflation translates into consumer price inflation with a certain lag. Anyway, high inflation won’t disappear in one or two months, but it could last for at least a few or even several months if the Fed remains ultra- dovish and people lose confidence in the central bank’s ability to maintain price stability. 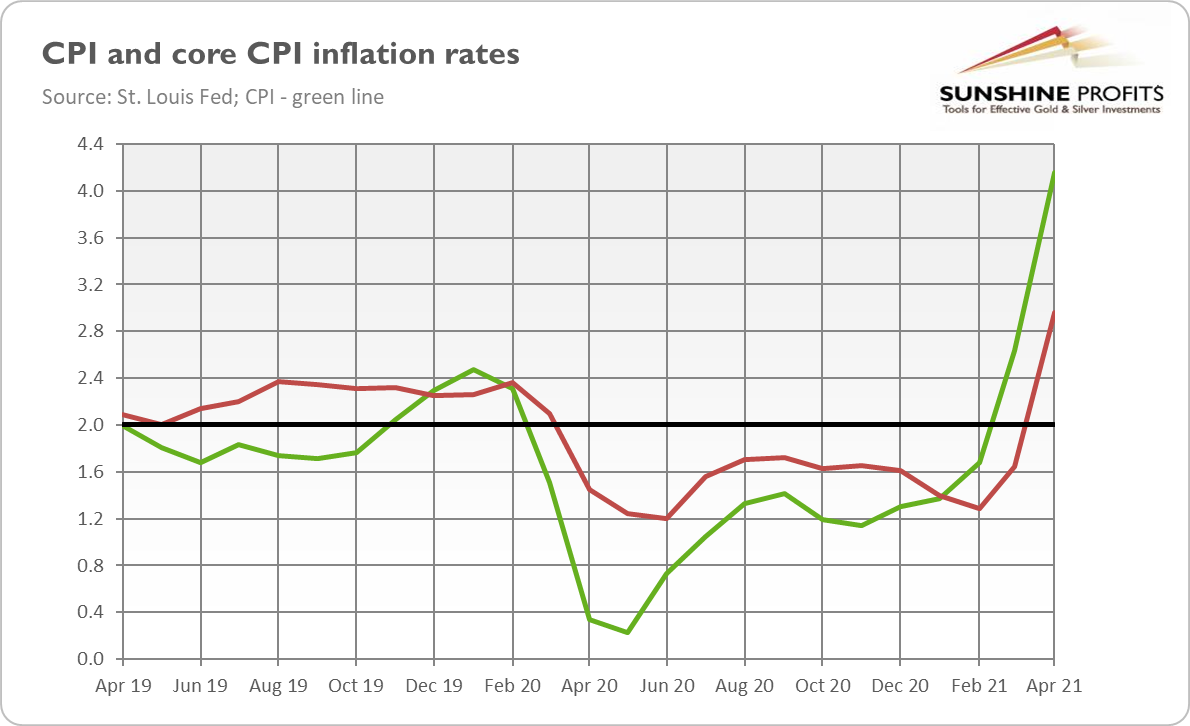 If this scenario happens, inflation expectations could cease to be “well-anchored” and inflation could get out of control, just as it did during stagflation in the 1970s. Chris Williamson, Chief Business Economist at IHS Markit, seems to agree with me in his comment on the report:

The May survey also brings further concerns in relation to inflation, however, as the growth surge continued to result in ever-higher prices. Average selling prices for goods and services are both rising at unprecedented rates, which will feed through to higher consumer inflation in coming months.

What does the recent IHS Markit Flash U.S. Composite PMI imply for gold? Well, strong economic activity is bad for gold, given that it usually shines during bad times. However, the yellow metal doesn’t like genuine, real growth, but it performs pretty well during inflationary periods. Of course, part of the growth comes from the reopening of the economies, but there is no doubt that this expansion is accompanied by high inflation.

I’ve been warning readers since the very early part of the pandemic that the following expansion will be more inflationary than the previous one. This is excellent news for gold, which entered a bear market in 2011-2013 (i.e., when the former expansion settled down). What’s important here is that the economic environment is more inflationary (we have easier monetary and fiscal policies) while at the same time the Fed is highly tolerant of high inflation – this is a truly dangerous cocktail, but it could be quite tasty for gold.