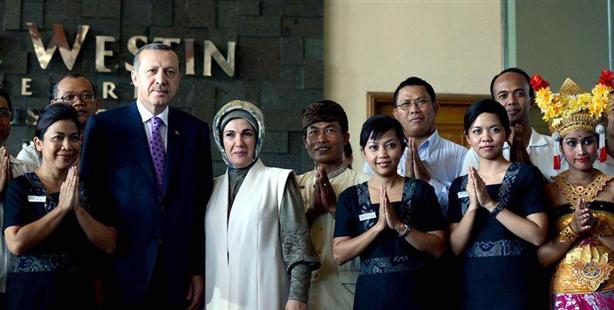 During his visit in Indonesia, Recep Tayyip Erdogan, Turkey’s Prime Minister, has suggested to the International Monetary Fund to replace the dollar by gold when lending to troubled countries.

He has also stated that IMF interventions have often had dire consequences for the countries involved with those plans.

So Erdogan asks why the IMF is using dollars instead of gold, which has proven throughout the centuries its ability in maintaining a constant value.

The IMF should not be using a currency that is tied to a sole country’s interests : the United States.

It cost dearly to Turkey a few years back when it went into an agreement with the IMF. In April, Turkey will be done paying back all that is owed the IMF, but Erdogan has vowed that no other agreement will ever be signed with the IMF in the future.

Erdogan concluded by saying that « everyone thinks that the IMF is helping troubled countries but it’s not the case, and that must change ».

This statement by the Turkish Prime Minister is full of meaning and it certainly confirms many countries’ exasperation (including the BRIC countries) with the dollar being used as international reserve currency. The dollar has lost 98% of its purchasing power since the start of the 20th century, and it’s not fulfilling its role of stability and value preservation.

FED’s Chairman Ben Bernanke’s strategy to « print » $40B a month (QE3) is appalling to the countries holding enormous reserves in US dollars. Since the US dollar is the de facto world reserve currency, all countries have some; hence they all see a rapid devaluation of their reserves.

On the other hand, gold is stable in terms of purchasing power and has been so for millenia. An old adage says that one can buy a good suit with an ounce of gold... and it’s still true today with gold at 1,360 euros per ounce.

The only way to really understand gold’s price progression is by looking at it as a symbol of the destruction of paper money’s purchasing power.

More and more countries holding large currency reserves are well aware of this permanent destruction of the dollar’s purchasing power and have kept pushing for a few years for a new currency that wouldn’t be tied to only one country’s economic or financial interests.

This statement by the Turkish Prime Minister provides us with another hint at what to expect with the next monetary system. Protect your wealth accordingly.