To cope with historically high inflation, central banks are gradually ending "free money." The era of abundant liquidity seems over. But for how long? The consequences of a normalization of monetary policies are already being felt in the markets. However, monetary institutions do not seem to be really committed to fighting rising prices since real interest rates remain deeply negative.

Since June, the Fed has reduced its monthly purchases of Treasury bills by $30 billion and those associated with mortgage debt by $17.5 billion. According to statements by U.S. central bankers, this pace could double starting in September 2022. As a reminder, after having bought nearly $100 billion of government and multinational debt on the secondary market every day at the beginning of the coronavirus crisis, the US central bank has engaged in monthly redemptions of $120 billion over the past two years.

For its part, the ECB announced that it would stop buying assets as of July 1, 2022, with the aim of slowing down the rise in prices. This declaration was not without consequences, as interest rates in European countries have risen considerably, reaching levels close to those of 2014, the period preceding the launch of the real quantitative easing program in the eurozone.

In this context, the European Central Bank decided to hold an emergency meeting on June 15 to reiterate the announcement of the creation of an "anti-fragmentation tool." (the term fragmentation referring to the increase in interest rate differentials between European countries). This meeting was intended to reassure the markets. (This has so far been successful).

While the economy is overheating (inflation at 8.1% for the month of May in the eurozone), Italian debt has increased by 300 basis points since the beginning of the year, causing the spread between Italy and Germany to soar. 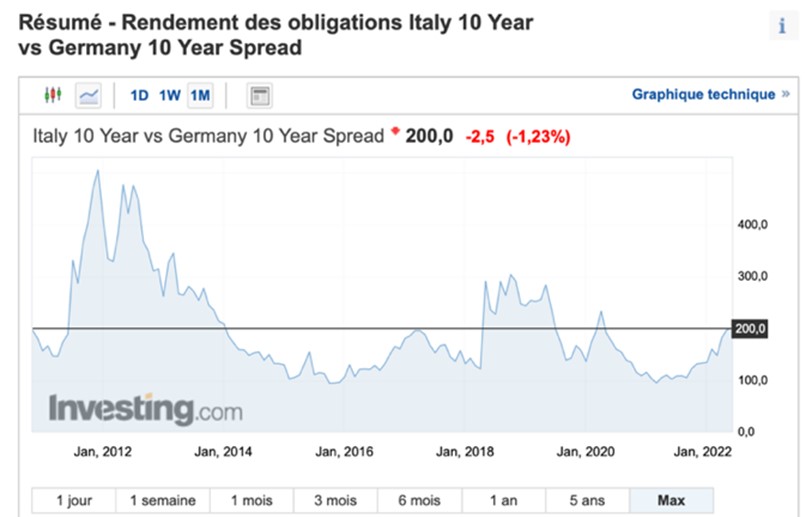 Furthermore, the ECB is committed in the coming weeks to "it will apply flexibility in reinvesting redemptions coming due in the PEPP portfolio, with a view to preserving the functioning of the monetary policy transmission mechanism". Put another way, this would amount to reinvesting these assets in the purchase of new debt of countries subject to sharp rate hikes: Italy, Spain, Portugal, etc.

But beyond the more or less mysterious nature of this tool, it is worth looking at its possible implementation, because this type of measure is not unlike the use of the Public Sector Purchase Programme (PSPP) and Germany's opposition to it. In fact, on May 5, 2020, the Court of Karlsruhe had filed a ruling where it criticized the Court of Justice of the European Union (CJEU) for merely exercising limited control in the PSPP, a debt buyback scheme launched in 2015.

The acceleration of the establishment of this new plan therefore probably means a tug of war between the ECB and European countries loyal to fiscal rigor (Germany, Austria, the Netherlands, Sweden, Denmark).

As far as key interest rate operations are concerned, the ECB has stated that it will implement a first increase of 0.25% as of July 1, followed by a second increase of 0.5% in September. At -0.5%, the deposit rate remains negative for the time being.

While this new increase may give the illusion of a hawkish policy (aimed at fighting inflation), it must be noted that real rates are negative and the Fed's balance sheet is still at a historically high level. In fact, the U.S. central bank, like the ECB, continues to drive up prices.

Moreover, some indicators seem to point to the creation of an inflationary spiral. In the United States, the price-wage loop - so feared by monetary institutions - has finally been activated, as nominal wages rose by 6.1% in May over a year.

In Europe, the fall of the euro induced by the rise of the dollar (and the ECB's wait-and-see attitude) is leading to an increase in imported inflation. According to Amundi, the euro could even reach parity against the dollar in the coming months.

The rise in prices could then persist, or even increase. 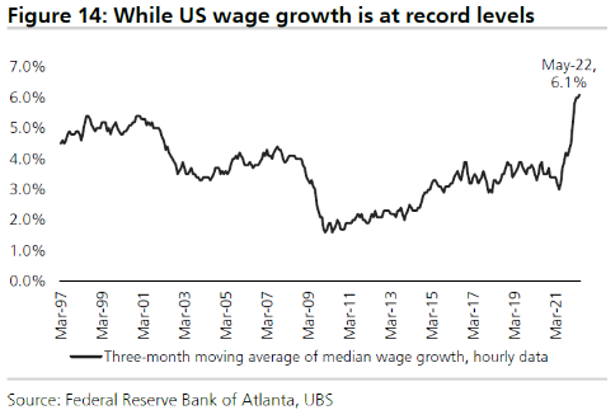 But the maneuvers of the two major central banks reflect the interests of Europe and the United States. While the ECB's inaction regarding a rate hike keeps the euro weaker and weaker against the dollar, which makes European countries more competitive in the short term, thus reducing the burden of government debt; a further rate hike by the Fed allows the United States (and the dollar) to support the decline in inflation in view of the mid-term elections in November, while promoting the lending activities of American commercial banks, which, it should be remembered, are the shareholders of the twelve regional central banks which make up the Fed.

As an indication, the two major banks CitiGroup and JP Morgan hold respectively 42,8% and 29,5% of the capital of the Federal Reserve Bank of New York, allowing them to elect three of the nine representatives of the governance board of the bank of NY.

The risk of recession is increasing

Recently, former New York Federal Reserve President Bill Dudley said, "A recession is inevitable in the next 12 to 18 months." In light of the current situation, this statement is not insignificant. In these contrasting times, the markets seem confused. The financial consequences are intensifying.

Crypto-currencies are the first to be impacted. As evidenced by their performance over the course of 2021, the price of the various indices depends - to a large extent - on the evolution of the Fed's policy. A tightening of monetary policy will therefore inevitably lead to an illiquid market and forced liquidations, especially since many investors use leverage, sometimes very high.

Against the backdrop of rising interest rates, the bond market continues its downward spiral. Negative return bonds worldwide have fallen from a peak of $17.8 trillion at the end of 2020 to $1.6 trillion today! That's a drop of 84% in just six months. Pension funds, insurers, but also central banks, are taking heavy losses - in market value (MTM). 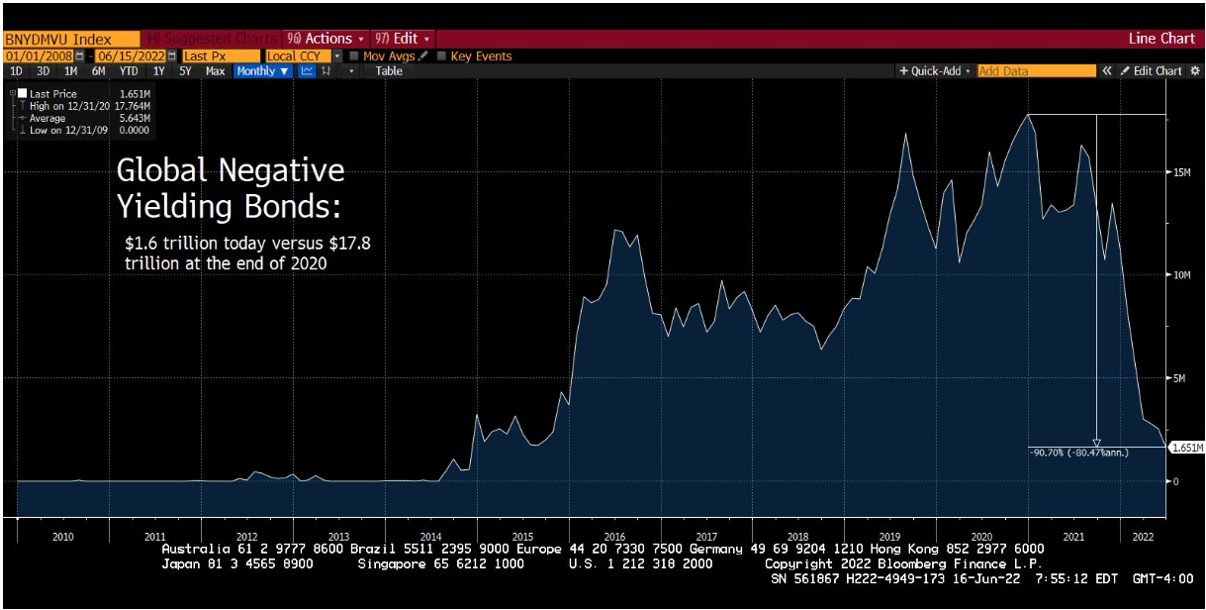 In the United States, as in Europe, the household savings rate is decreasing and the volume of consumer credit continues to increase.

Furthermore, the curve between the U.S. 2 Year and the U.S 10 Year inverted once again during the week of June 13. The fact that a short rate brings a higher yield than a long rate shows investors' fear of a recession risk.

This issue is no longer dismissed by anyone. Fed Director Jerome Powell himself has stated that "it is a possibility that aggressive interest rate hikes could cause a recession." 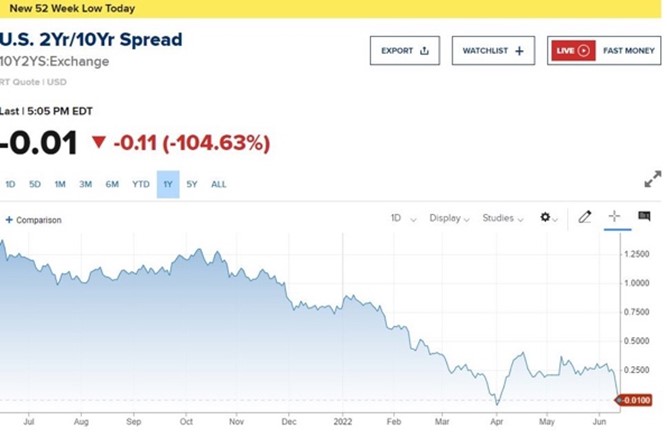 In this context, it is important to follow the price of commodities. Due to the rise in interest rates and the appreciation of the dollar, demand is contracting, leading to a drop in commodity prices. This phenomenon has already been observed for several days.

At the same time, the drop - which was greater than expected - in the PMI index in the United States and Europe for the month of June, indicates a slowdown in manufacturing activity.

If these trends persist, and if the second quarter figures announce - on both continents - a further decline in GDP, this means that "economic pessimism" is no longer a hypothesis, but a reality.

The delicate management of public finances

Although the United States benefits from the hegemony of the dollar to finance its deficit, the debt burden is likely to increase sharply. In the year 2021, the country spent $562 billion on debt interest payments, more than the annual budget for education, justice, transportation, or even agriculture.

From now on, the country is no longer borrowing at 0.6% over ten years as it did last year, but at more than 3% over ten years. With 30 trillion dollars of debt (of which 6 trillion - estimated - to be rolled over in the next ten months), future borrowing will become, in the medium term, very expensive (the average maturity of a bond being 7-8 years).

In the European case, in order to avoid a dilemma between implementing austerity policies or increasing debt servicing (growth has been very low for many years, and high inflation is not permanent), recourse to new measures could prove indispensable.

The establishment of a common budgetary capacity would be a first step.

This federal leap would allow a reduction in the cost of credit for the most indebted countries, which would mark a major step towards European consolidation.

Since the issue of public debt is a burden, subjecting European countries to a Cornelian choice, small-scale proposals seem inappropriate.

If the ECB decides to maintain the status quo, the risk endured could be that of a Japanization of Europe, i.e. the continuous purchase of public debt in order to keep interest rates at very low levels.

This leads to an increase in the balance sheet of the central bank and a surge in the debt of the various countries, while the European Stability and Growth Pact imposes a maximum debt of around 60% of GDP per country... (although this rule has long been the subject of a moratorium).

As a student of finance and editor at Le Vent Se Lève, Julien Chevalier specializes in monetary issues and the role of central banks. He is convinced that another monetary policy is possible, and is particularly interested in its influence on economic and political decisions.