Remember that Alasdair Macleod did a Commitment of Traders (COT) analysis on July 11, saying there was a very big fish in the money market. See my article of August 12 2019.

This big fish caused the sharp rise of silver in late August, which looked a lot like a short squeeze. The other sharks had to buy back their short positions in a hurry. This very big trader held 20 000 contracts of 5 000 ounces, ie 100 Moz of silver.

According to Ted Butler these 20 000 contracts were sold around August 20, with a profit of $ 300 million. In very unusual circumstances, at the time this long position was liquidated on COMEX futures, there was a simultaneous explosion of more than 100 Moz of physical silver deposits in a number of Silver ETFs, including SLV, SIVR and Silver ETF from Deutsche Bank.

There is therefore a "big fish" who, by a sleight of hand between futures and ETFs, who could be now in possession of 100 Moz of "physical" silver without making the silver price soaring. At the same time, by converting its futures into ETF shares, this trader gets out of reach of the CFTC, which cannot sanction him to hold a dominant position in the market. 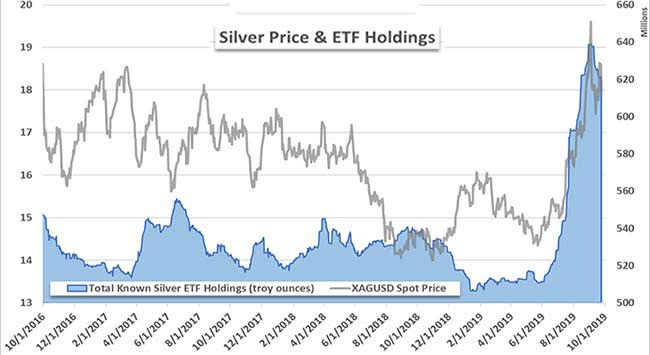 The Big Fish (and its remora) is back and took advantage of lower prices to strengthen its long position.

The end of the consolidation

On this weekly silver chart dated 8/11/2019, first have a look at the Fibonacci's fans (in red), which fall from the 2011 peak. (I erased those that have already been played.)

Now, focus your attention on the green line. It starts from the low point of July 14 1997, when Warren Buffet started buying silver, causing the 1997-1998 mini-rally.

The next graph is only the enlargement of the current period.

Look first at the role of the 1997 axis and the essential role it had played since December 2018.

The prices have just made a pull-back on this old resistance of early 2019, in a perfect way.

Now look at the role of the Fibonacci fans coming from the 2011’s top. Here too, the movement has been more than perfect!

Finally, you can see that on Friday 8, the low point was made on the support (dark green) of the canal.

Silver is now able to bounce back to attack the Fibonacci fan at $ 19.2 and should pass the $ 20 level before December 31st.

Obviously, a very big bullish movement is being prepared.

Does Gold touched its low point? I dont think so. On the other hand, what I'm sure is that the prices will know an historical rise in the first half of 2020. They should most likely double between the low point of November-December 2019 and the future high point in June-July 2020.

While the CNN "fear or greed index" is close to the maximum of greed on Wall Street and the stock market seems about to develop a bullish rally, I think we should witness in the first days of 2020 to a turnaround of 180°.

The precious metals will rise on a sharp fall in the stock market, which should lose 40% of its value before the end of 2021.

Dont be greedy. Dont play the rise of metals with these leveraged financial instruments, just be in physical gold and silver. All the "paper" will end badly. Take your profits now and invest them in physical metals exclusively.