Inflation is coming. Gold may benefit from it, especially if inflation turns out to be more long-lasting than central bankers and markets believe.

Brace yourselves, inflation is coming! Importantly, not only grumblers such as myself are talking about rising prices right now, but even the Fed officials themselves admitted that inflation will jump this year. Indeed, in the latest dot plot, the Federal Open Market Committee (FOMC) expects that the PCE annual percent change will soar from 1.3 percent in December 2020 to 2.4 percent at the end of this year. Importantly, their projections increased significantly in the last three months when they amounted to 1.8 percent.

And remember, we are talking here about the official inflation figures. The real inflationary pressure, which also affects asset prices, is much stronger. Furthermore, the pandemic changed the composition of consumption, as people are buying more goods and less services. And guess what, the prices of goods are rising more than the prices of services, so many people’s actual consumption baskets have become more expensive than official ones, implying that true inflation is higher than the officially reported one, as the IMF has recently admitted.

Does this mean that the FOMC members have all suddenly become monetary hawks worried about higher inflation? Not at all. The Fed believes that inflation will be temporary, caused by the base effects (very low inflation readings in the second quarter of 2020) and by the reopening of the economy that will trigger higher consumer spending and some increases in prices.

The U.S. central bank might be right. After all, there will be some temporary forces at play. There always are, but – oh, what a funny thing! – the Fed always cites “transient effects on inflation” when it’s increasing, but not when it’s declining. The problem is, however, that the markets don’t believe the U.S. central bank. Please take a look at the chart below, which displays inflation expectations over the next five and ten upcoming years. 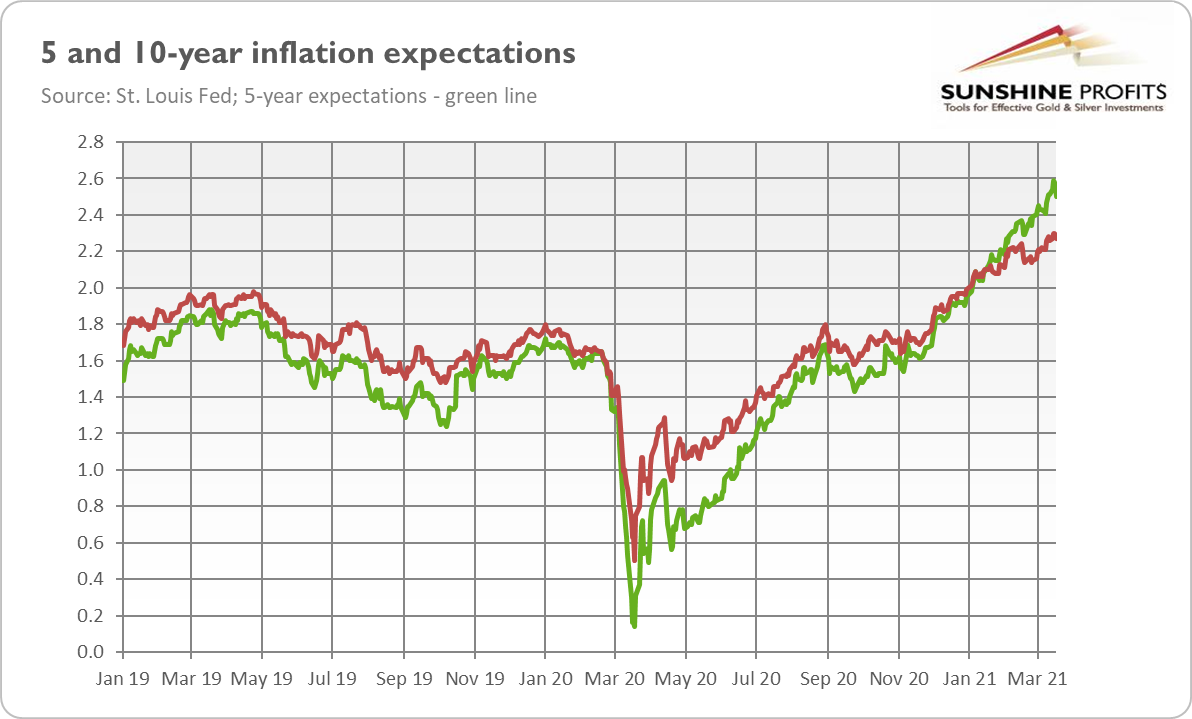 As you can see, both medium-term and long-term inflation expectations have significantly increased in the last few months. It means that investors don’t only expect a temporary rise in inflation – on the contrary, they forecast a more persistent increases in prices. Indeed, Mr. Market believes that inflation will be, on average, 2.5 percent in the next 5 years and almost 2.3 percent in the next 10 years, significantly above the Fed’s target of 2 percent.

Of course, it might be the case that Mr. Market is wrong, and Mr. Powell is right. But what is disturbing is the Fed’s confidence – or, rather overconfidence – that it can contain inflation if it turns out to be something more than only a temporary phenomenon. Such a conceit led to stagflation in the 1970s. Gold shined at that time.

Then, as today, the central bank focused more on the maximum employment than inflation, believing that it can always control the latter by raising the federal funds rate if necessary. But, as Robert J. Barro, from Harvard University, points out, “the problem is that hiking short-term rates will have little impact on inflation once high long-term expected inflation has taken root.”

And the recent Fed’s actions, including the new monetary framework, according to which the U.S. central bank tries to overshoot its target for some time, may easily waste the reputational capital that was created by Paul Volcker and de-anchor inflation expectations.

In other words, a negative shock can be accommodated by the central bank without long-lasting effects, as people understand that it’s a unique one-off event, after which everything will return to normalcy. But the Fed is far from normalizing its monetary policy. On the contrary, it has recently signaled that it wouldn’t raise interest rates preemptively to prevent inflation, as it could hamper the economic recovery. The risk here is that if people start to view exceptional as the new normal, their inflation expectations could shift, and become unanchored.

To sum up, it might be the case that markets are overstating short-term inflation risks. But it’s also possible that politicians and central bankers understate the longer-term inflationary dangers, as Kenneth Rogoff, also from Harvard University, argues. After all, unlike in the aftermath of the Great Recession, when only the monetary base skyrocketed, the pace of growth of the broad money supply also soared this time – and it’s still increasing, as the chart below shows. 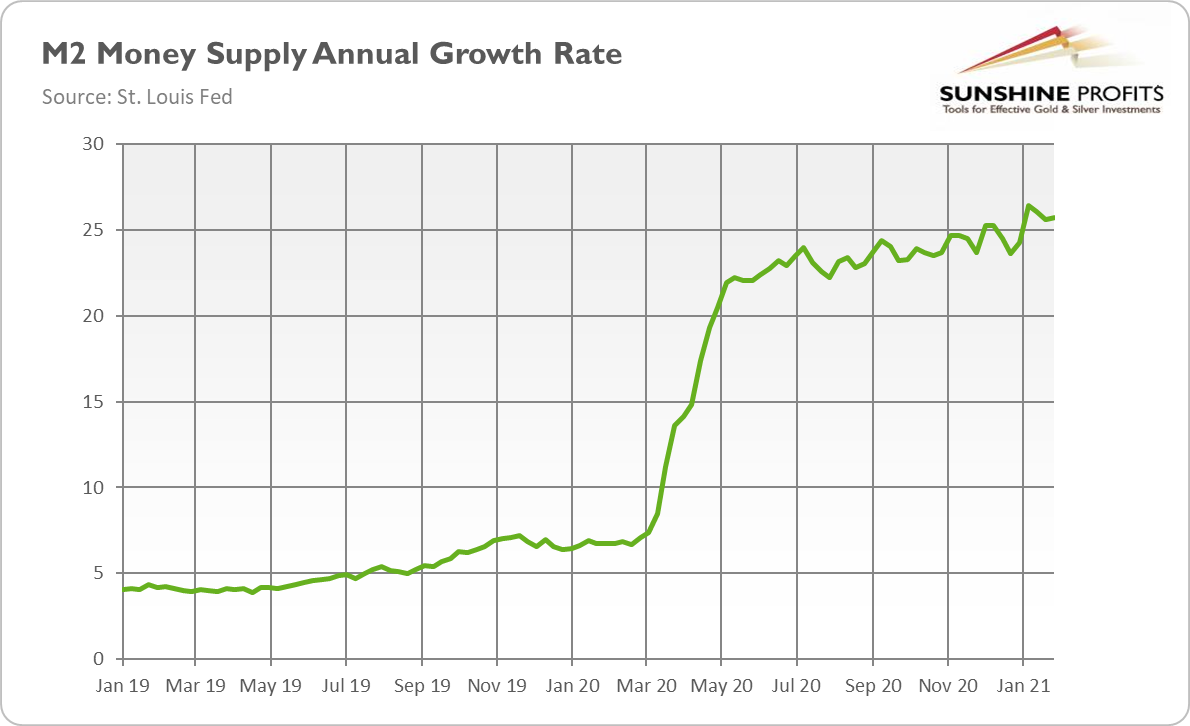 In other words, while all the created liquidity after the global financial crisis of 2007-2009 flowed mainly into the financial markets, during the pandemic, it flowed into the real economy to a much larger extent, which can create more inflationary pressure.

What’s more, the easy monetary policy is now accompanied by a very loose fiscal policy and the unprecedentedly large fiscal deficits, which could push the economy deeper into the debt trap. This could undermine the central-bank independence and prevent a timely normalization of interest rates, not to mention the weakening of globalization’s downside impact on inflation, caused partially by demographic factors and reshuffling in supply chains. Last but not least, the rising commodity prices and international transport costs, accompanied by the weakening U.S. dollar, may be harbingers of an approaching inflation monster.

What does it all mean for the gold market? Well, the jump in inflation in 2021 should be positive for the yellow metal, which could gain as an inflation hedge. The downward pressure on the real interest rates should also be supportive for gold prices, although the rally in the bond yields may counteract this effect. But if Powell is right and inflation turns out to be only temporary, then gold may be hard hit, and we could see a goldilocks economy again (i.e., fast economic growth with low inflation). However, if markets are right, or if the long-term inflationary risks materialize, which even investors may understate, gold should shine.