No, TARGET2 is not a video game. The term is never mentioned in the media, yet it is the crucial point of fragility of the euro. A note from the French Treasury (Les déséquilibres TARGET2 en zone euro - TARGET2 imbalances in the euro zone) clumsily attempts to defuse this risk. Let's analyze it closely.

The euro is a very special currency, because its creation did not lead to the disappearance of the central banks of the member countries: we therefore find ourselves with ONE SINGLE currency managed by SEVERAL central banks! These national central banks are shareholders of the European Central Bank (ECB), which determines monetary policy, but they still exist, so their monetary exchanges must be regulated, and this is done through "TARGET2". This is not seen anywhere else, so it is not said that the dollar is the "single currency" of the United States.

Before the 2008 crisis, there was no imbalance between the different central banks of the European Union, German trade surpluses were recycled to Italian banks, for example:

But everything changed at the time of the subprime crisis and the Greek crisis of 2011-2012. German banks' confidence in Italian banks literally collapsed, and they kept their excess liquidity rather than lending it to banks in southern countries, for fear of not being able to recover this money. Worse, the deposits of Italian and Spanish savers are going to safe havens in safe countries, increasing the imbalances even more:

"Following the financial crisis of 2008 and the sovereign debt crisis in 2012, TARGET2 balances rose sharply as a result of tensions in the interbank market and the flight of deposits from "peripheral" countries (Italy, Greece, Spain, Portugal, Ireland) to "core" countries (Germany, the Netherlands, Luxembourg)".

It is the European Central Bank that must take over and finance the banks of the countries of the South, which would otherwise be short of liquidity and therefore bankrupt. Moreover, the ECB's policy of buying up sovereign debts (the "QE", the "printing press") increases these imbalances. In fact, since the funds have been transferred to the countries in the heart of Europe, the counterparts are also there:

"About 80% of purchases are made with non-resident counterparties, and 50% of total purchases are made with non-eurozone counterparties, mostly concentrated in the UK. Most of these non-resident counterparties use subsidiaries in Germany or the Netherlands to access the TARGET2 transfer system, which creates unbalanced cross-border financial flows within the eurozone, affecting the TARGET2 central account and the balance sheets of national central banks".

As the Treasury Department states, TARGET2 is an "essential link in the smooth flow of liquidity within the European banking system and thus in financial integration within the EU".

However, it is not going well at all since we notice "a persistent drying up of cross-border interbank funding in the eurozone [...] excess liquidity remained concentrated in the "core" eurozone countries".

The result of these imbalances is this: 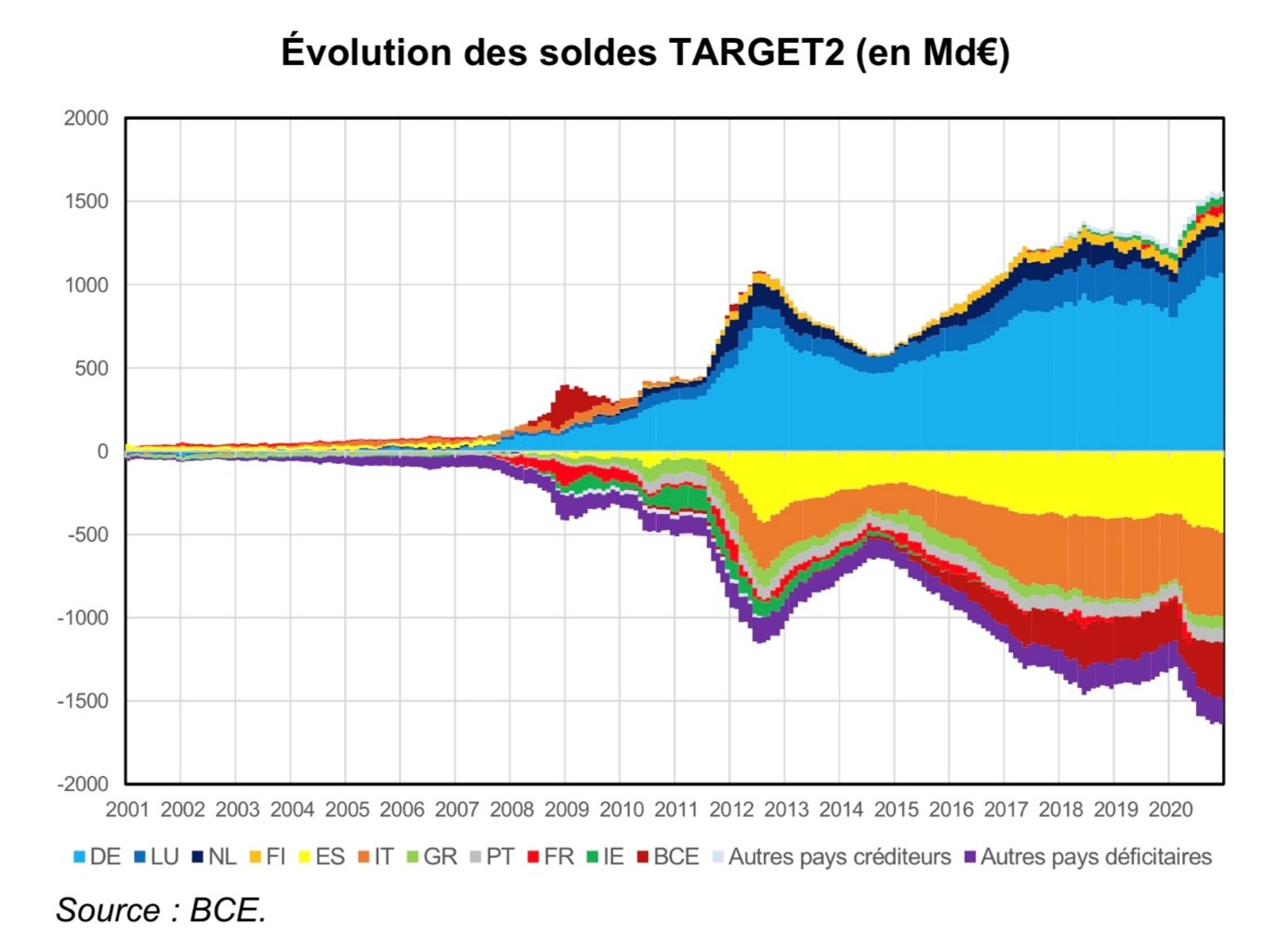 You can also consult this page to download the figures.

The German central bank, the Bundesbank, is a creditor of about 1.1 trillion euros (about 32% of Germany's GDP), while Italy and Spain are debtors of about 500 billion euros each. Germany not only concentrates European industry, but also captures the funds, the European savings.

And then what? Won't these imbalances lead to a crisis of the euro itself? Not to worry, according to the French Treasury, which is blissfully optimistic:

"These imbalances are likely to be resolved, in the long run, with the normalization of the ECB's monetary policy, and the harmonization of the eurozone's banking and financial sectors in order to stimulate cross-border interbank trade, which will allow the ECB to gradually reduce its role as intermediary of the banking sector. This will, however, require the deepening of the Economic and Monetary Union, in particular through the banking union and Capital Markets Union".

The system is flawed by construction, but everything will work out, don't worry... as long as the countries of the heart of Europe strengthen their hold on those of the South. This requires the "Capital Markets Union", i.e. that the Germans buy Italian and Spanish savings products, and the "banking union", i.e. that the German banks merge with the Italian and Spanish banks. And everything will return to normal.

How can we believe in such a scenario? Zero interest rates mean that Italian and Spanish savings products have no advantage over their German counterparts, and German banks (Deutsche Bank, Commerzbank) are in such bad shape that they have absolutely no means, nor the desire, to acquire Italian and Spanish institutions, which are also in bad shape. We are sorry to contradict the Treasury, but there is no sign of any improvement in the TARGET2 balance- on the contrary. It is therefore the euro itself that is threatened by these growing imbalances, which cause wealth (industrial and financial) to flow to the core of Europe, to the detriment of the periphery.

Although it is approximately in balance in TARGET2, France could fall into the debtor nations because it is suffering much more than Germany from the Covid crisis. We shall see. But this growing gap in balances between the central banks of the European Union reflects a weakening of the banking systems of the peripheral countries, and it could one day call into question the "uniqueness of the currency".

What could happen? These growing imbalances will force the ECB to provide more and more liquidity to the banks of the South, and inflation will loom. And if Germany rebels against this prospect, forcing the ECB to turn off the tap, the deterioration of the situation of the Italian and Spanish banking systems will make its debt (1.1 trillion euros today) worthless (the Bundesbank bankrupt!). The "uniqueness of the currency" will therefore be called into question either by inflation or because Germany will accept its deconstruction (a euro-lire, a euro-peseta) because it will want to get out of this mess. We are betting on inflation, which is starting to happen...