The world's largest asset manager recommends a virtual ‘no gold’ position. On the contrary, we think it's never been more useful to have the barbaric relic at the ready to provide the best hedge for your wealth.

If you happened to read that the BlackRock fund recommends a near-zero position in gold in its asset allocation, don't be alarmed.

According to fund manager Russ Koesterich, gold is only useful as a hedge against equity risk when real interest rates (interest rates minus inflation) are stable or falling.

In other words, Koesterich thinks that real interest rates will normalize.

It looks like he thinks the Fed will start reducing its bond purchases by $120 billion per month. This would allow interest rates to rise, neutralizing the need for gold as a hedge.

We think this is a mistake. Here's why.

OUR KEY INDICATOR: THE DOW JONES RELATIVE TO GOLD

We are in the final stages of a massive bubble of debt, money creation and government spending.

Already a little over three years ago, in late 2018, the Federal Reserve attempted to normalize monetary policy by raising interest rates. At that point, investors let go of stocks. The economy began to stall. The Fed had to backpedal and started lowering rates again.

We will never see a normalization of monetary policy or a traditional rate hike. The authorities are caught in their own trap. There is now only one way to go: down the slippery slope faster.

Fortunately, we are a few steps ahead and will adjust to the situation...

GOLD, A CONSTANT IN THE MONETARY SYSTEM

Equity markets - as measured by the Dow Jones Industrial Average - hit a new high on Monday, August 16, 2021 (at 35,631 points). But market movements in nominal terms are almost insignificant.

Over the long term, we prefer to price the market against gold. This gives a much clearer picture of what is going on.

Since 1915, the price of gold has been fairly stable, increasing in value by a factor of three. During the same period, the dollar has lost more than twenty-five times its value.

The calculations are more complicated with European currencies which have undergone more shocks (inflation, hyperinflation, changes in currency denominations, etc.).

But the result is about the same. Gold does not depreciate, fiat currencies do! And even the Swiss franc, which is considered the strongest currency par excellence. Did you know that between 2004 and today, the value of gold expressed in Swiss francs has more than tripled, from CHF 500 to CHF 1,630?

GOLD: A BEACON IN THE STOCK MARKET SLUMP

Therefore, we consider gold to be a constant in the monetary system, the benchmark against which we measure everything else.

Why did you choose the Dow Jones index and not the Nasdaq or the S&P 500? Because it is the oldest index, it allows us to go further back in time.

Here's how this Dow Jones ratio has looked in relation to gold over the 120+ years since the index was published.

The graph gives us the real history... 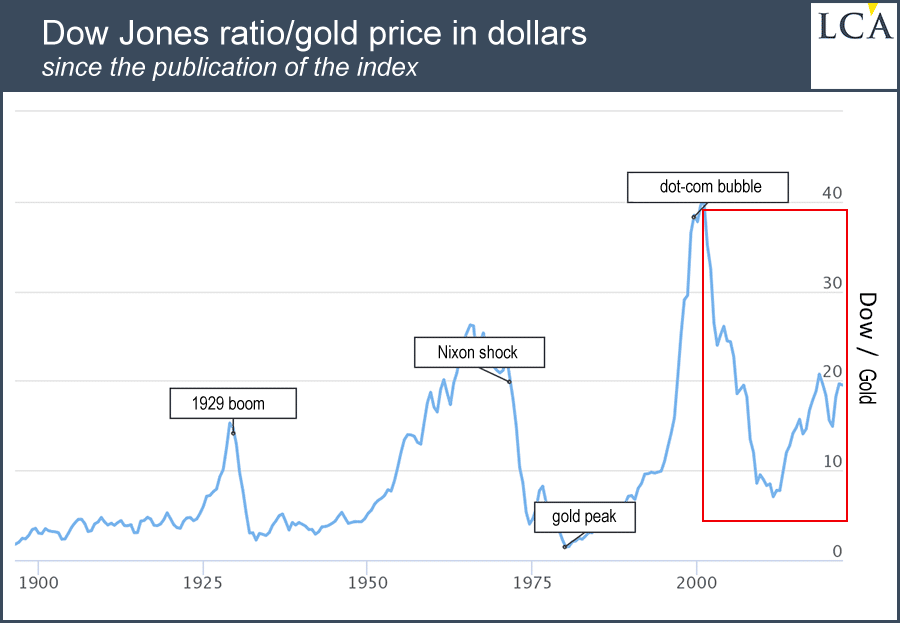 Within three months, the U.S. federal government ran up a $2 trillion budget deficit and the Fed bought $3 trillion in federal debt.

The U.S. central bank promised that it would hold on to these securities as long as it took to get the economy back to full speed.

We are in what may be historically one of the biggest bounces in a major bear market. You can discern it on the chart: it started in late March 2020 and continued through August 2021.

GOLD: A HEDGE AGAINST SIMMERING DISASTER

It appears that we are indeed dealing with a rebound within a bear market. A rebound fueled by a single massive intervention. The downtrend should resume soon.

If our big picture is correct, we will see more and more massive interventions by the Fed or stimulus passed by U.S. Congress until it all comes crashing down.

Of course, the ratio can fall because gold is rising, because stocks are falling, or both simultaneously.

Safety is about avoiding the "fatal loss" in your wealth. To do this, it is best to own gold as a hedge against the brewing monetary disaster.