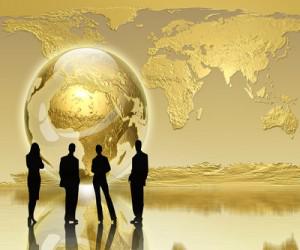 “Gold is the sovereign of all sovereigns” Democritus

They say that gold is a geopolitical metal. Gold is real money with no counterparty risk and, furthermore, an excellent wealth preserver in time and space. Like fiat currencies (dollar, euro, yen, Yuan etc.), gold’s price is also influenced by political events, especially those having an international impact. Alan Greenspan, ex-chairman of the Federal Reserve, said that gold is money “in extremis”. This is why gold is part of most central banks’ reserves. It is the only reserve that is not debt and that cannot be devalued by inflation, contrary to fiat currencies.

Observe in chart #1 that central banks own 30,500 tonnes of gold, or 19% of above ground gold. However, this number is an underestimation, because several countries (e.g. China, Saudi Arabia) report only a portion or none at all of their gold holdings. In addition, if they do, they do not do it in a timely manner. 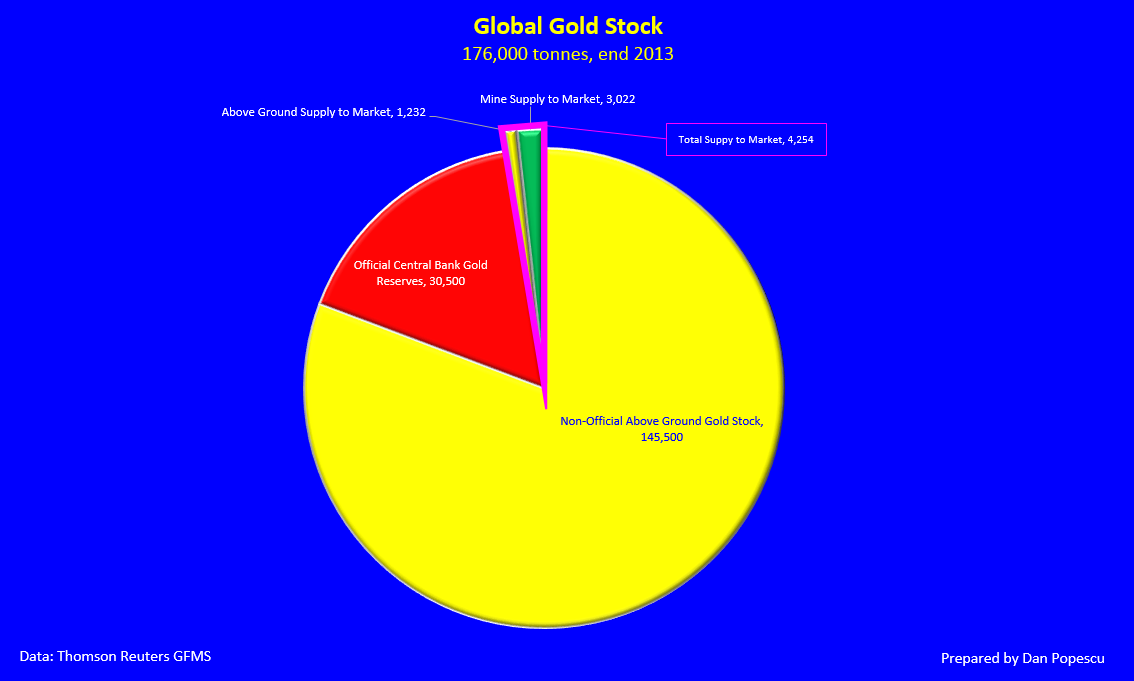 I think that the official amount of gold held by some countries (through different institutions) is rather close to 40,000 tonnes. Even if this gold represents only 20% to 25% of the total gold stock, it can be quickly brought to market and in sufficient quantities to have an impact on the market price. The annual gold market is only 4,477 tonnes per year; it is thus easy for United States or the European Union to influence gold’s price, since they own respectively 8,333 and 10,779 tonnes of gold.

Currencies mirror the health of the countries issuing them. When a country manages its economy well and offers a good social and political environment, demand for its currency increases and, thus, it appreciates, whereas the opposite happens when the economy and politics of the country are poorly managed. The fiat currency is the image of the country and its value only depends on the trust people have in its economy. When the international monetary system is on the brink of collapse because of an exorbitant global debt, there is a flux taking place toward real assets (land, buildings, jewelry, gold, silver etc.). Gold is real money, contrary to the different countries’ currencies, which are fiat money and can be devalued by monetisation of the debt.

Since the beginning of history, gold has taken center stage in geopolitics. History tells us that the Roman Empire invaded Dacia (Romania today) at the start of the 2nd century B.C. to take control of the rich gold mines of the Carpathians. The Empire had depleted all of its gold mines and its expenses were growing rapidly. The roman economy was based on war and those wars were costing more and more gold while they would bring in less and less. By that time, the Romans had taken a liking for luxury items that they did not produce themselves, like fine silk from China, pearls from the Persian Gulf, perfumes from India, ivory from Africa, etc. Roman gold was being used for those purchases and a lot of it was needed. Later, in the 1500s, the quest for gold became the objective of the conquest of the Americas after the return of Christopher Columbus who had discovered the Aztec and Inca gold. During the Second World War, Hitler put together a team with the mission of getting hold of the gold and other treasures of the conquered nations. Nazi Germany used all of its available resources to win the war, and gold was an important weapon in Hitler’s economic arsenal (gold stolen from occupied countries’ central banks between 1939 and 1942). It is interesting to note that private ownership of gold was forbidden, by left or right leaders, totalitarian or democrats, from Lenin in Russia, Hitler in Germany, Mussolini in Italy, Mao in China to Roosevelt in the United States.

In 1944, at the Bretton Woods Conference, the United States took advantage of the great weakness of world after the Second War and imposed a monetary system based on the dollar, but backed by gold. Following a crisis opposing the United States and Europe, but mainly France, gold backing of the dollar was abandoned in 1971. Deficits and debts brought about by less productivity and some costly wars (Korea, Vietnam) started to weigh heavily on the dollar. The US dollar has become, since 1971, the international monetary standard, without any gold backing. However, gold has remained the “de facto” standard lurking in the shadows, should a major monetary crisis occur, watching for the first mistake to regain its center role. Many countries, like Canada, sold all their gold in the 90’s but, in general, the official holdings, as can be seen in chart #1, have barely diminished.

A new era started in the 90’s with the end of the Cold War and, thus, the beginning of a world disarmament. An era of peace and prosperity seemed to have started under the almost absolute dominance of the United States. During this optimistic period, gold fell from $850 to $250 an ounce. This period was short lived, because the September 11 terrorist attack in New York, the war in Afghanistan, the invasion of Iraq, the 2008 financial crisis and, recently, the annexation of Crimea by Russia have changed all that.

During the 2008 crisis - that almost succeeded in bringing down the current international monetary system - gold made a stunning comeback into the system. During the crisis, gold became the only accepted guarantee in order to get liquidity. What was significant was that after having been ignored for decades, gold was coming back into the international monetary system via settlements of the Bank for International Settlements (BIS). These transactions themselves confirm that gold was coming back into the system. They revealed the poor state of the financial system before the crisis and showed how gold has indirectly been mobilized to support the commercial banks. Gold’s old emergency usefulness has resurfaced, albeit behind closed doors at BIS in Basel, Switzerland.

Starting in 2008, we can also observe that western central banks stopped selling gold and that emerging countries’ central banks accelerated their gold buying. The extreme indebtedness of Western countries coupled with a rebirth of the emerging markets economies have destabilized even more an international monetary system based on an already much weakened US dollar. 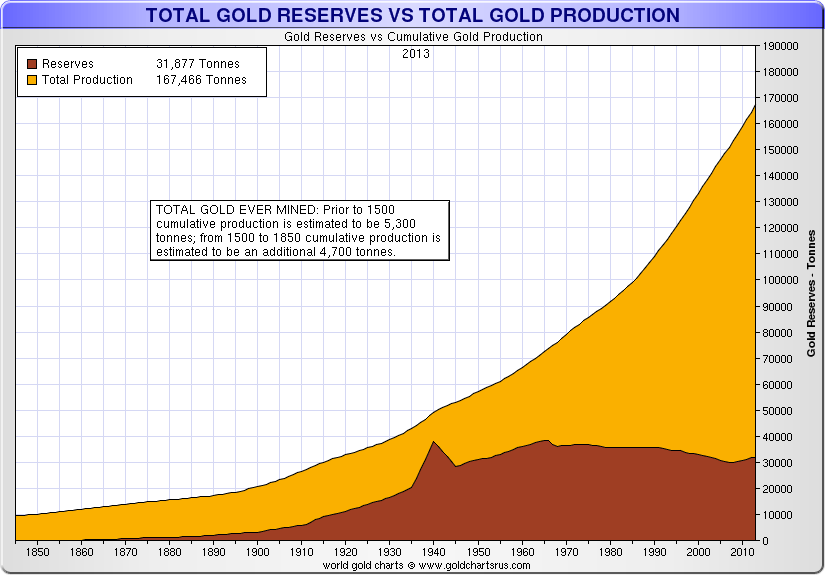 A confidence crisis has also reappeared between countries, especially between emerging countries and the United States. We are in a transition period in geopolitics and we are witnessing an economic shift and transfer of wealth from West to East. The new wealth owners are also asking for accrued political power internationally, in all the institutions where the European Union and the United States have a dominant position.

In order to protect the actual monetary system based on the dollar and that gives it exorbitant privileges, the United States manipulates the gold price, the only possible alternative if the dollar were to be replaced (or a SDR baked by gold). The United States is also trying to discourage countries and individuals to sell the dollar by way of negative public statements, but also by selling short on futures’ markets. Let us not forget that 40% to 60% of the US dollars circulate outside the United States. For the same reason, emerging countries are worried, and rightly so, that their reserves, mainly in dollars, will be confiscated by way of devaluation of the dollar. It is also possible that their gold reserves stored in the U.S. will be confiscated for so-called “force majeure” political reasons, in the interest of the “nation”.

Gold is money “in extremis”, and this is why it should not be stored out of the country. Only exception being an exceptional situation like a war, and only for a short time. I think that the only motivation countries had to store their gold in New York was greed through the possibility to speculate on gold at the risk of losing this “in extremis” reserve. Actually, this is what happened to Portugal; during the 2008 crisis and the Lehman Brothers’ default, the country lost its gold it had lent out. In times of crises or wars, it is very important not only to have legal ownership but also physical possession of the gold. Geopolitical alliances may change at any time and access to this “in extremis” money could be restrained or even refused.

In the current geopolitical framework that Ian Bremmer has so well called G0 (no country dominates; each one has advantage but also disadvantages), an international power struggle is occurring between the United States, the European Union, Russia and China. In this new Cold War, albeit in a G0 environment rather than in a G2 (United States and Soviet Union), where the European Union is not really allied with the United States and where China is not really allied with Russia, uncertainty prevails. In addition, other actors may influence this new Cold War that just got started since the annexation of Crimea by Russia. In a previous article on the gold wars, I mentioned the role of accelerator, agitator or troublemaker that third parties like Russia or Saudi Arabia could play. That is what happened with Russia, in Crimea, one month later. There is a war on the price of gold led by western countries, but there is also a war for gold ownership between all the countries; eastern countries being the ones that wish to exchange their dollar reserves for gold and as fast as possible.

In this new Cold War, which also includes a currency war, the role of gold has become central in the international political strategies of all countries involved. During this period of major risks and uncertainty, and until the return of a new geopolitical, economic and monetary order, gold will shine. Gold is money “in extremis” and is the only real money without any counterparty risk. This is why gold is considered, and rightly so, a geopolitical metal. 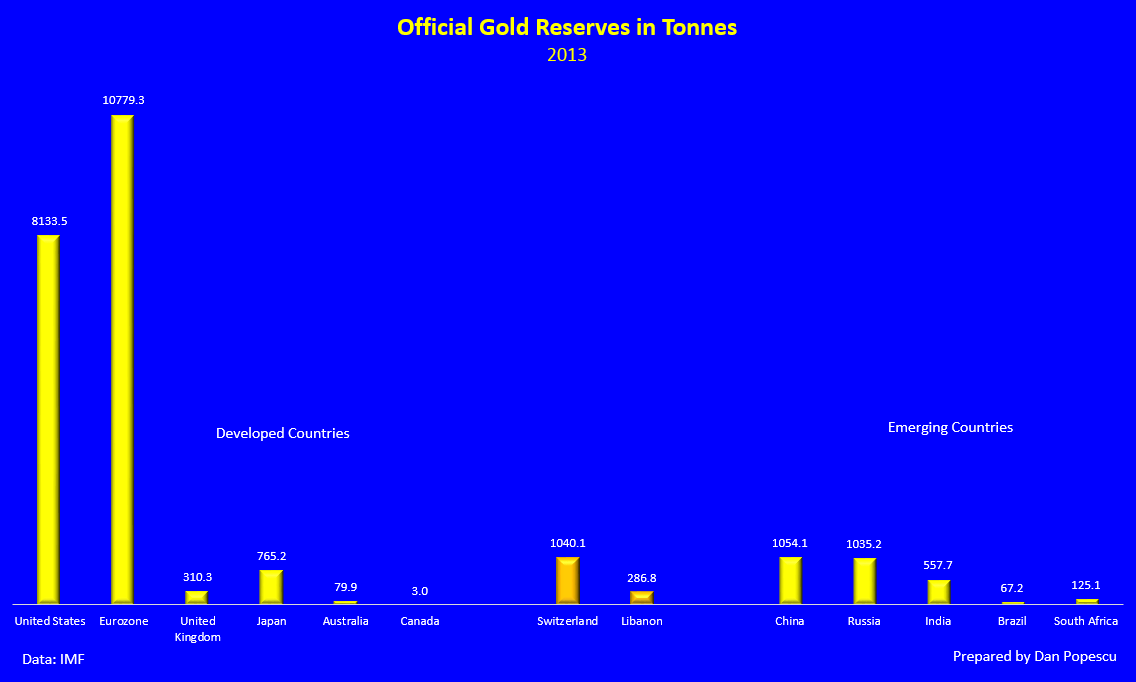 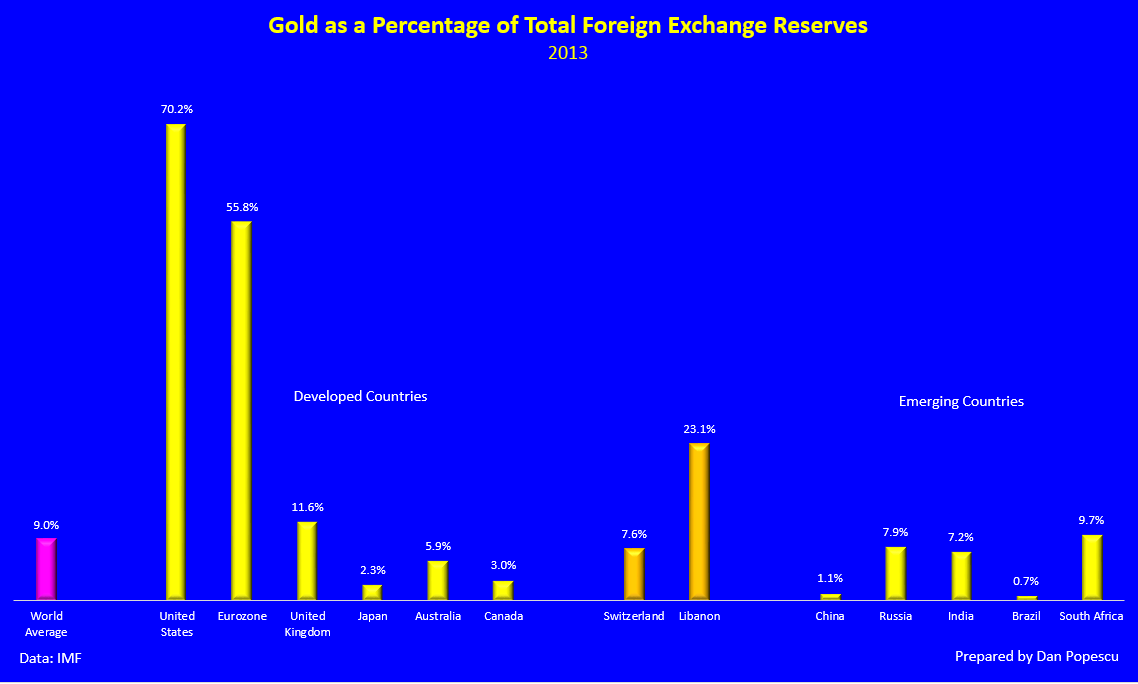 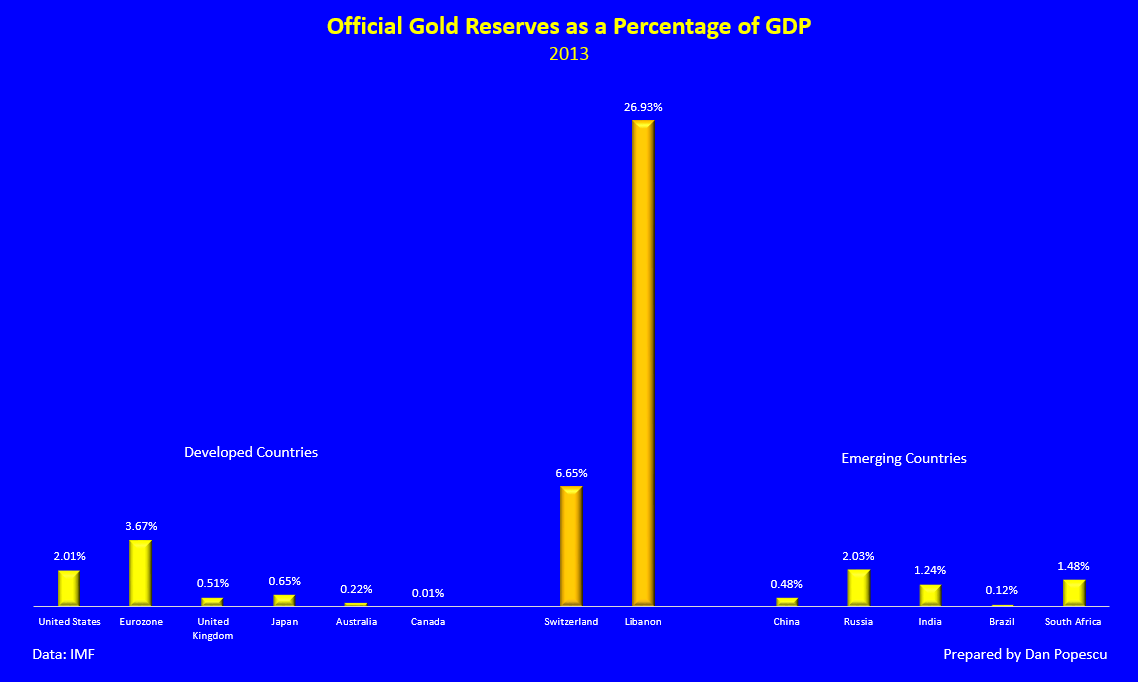 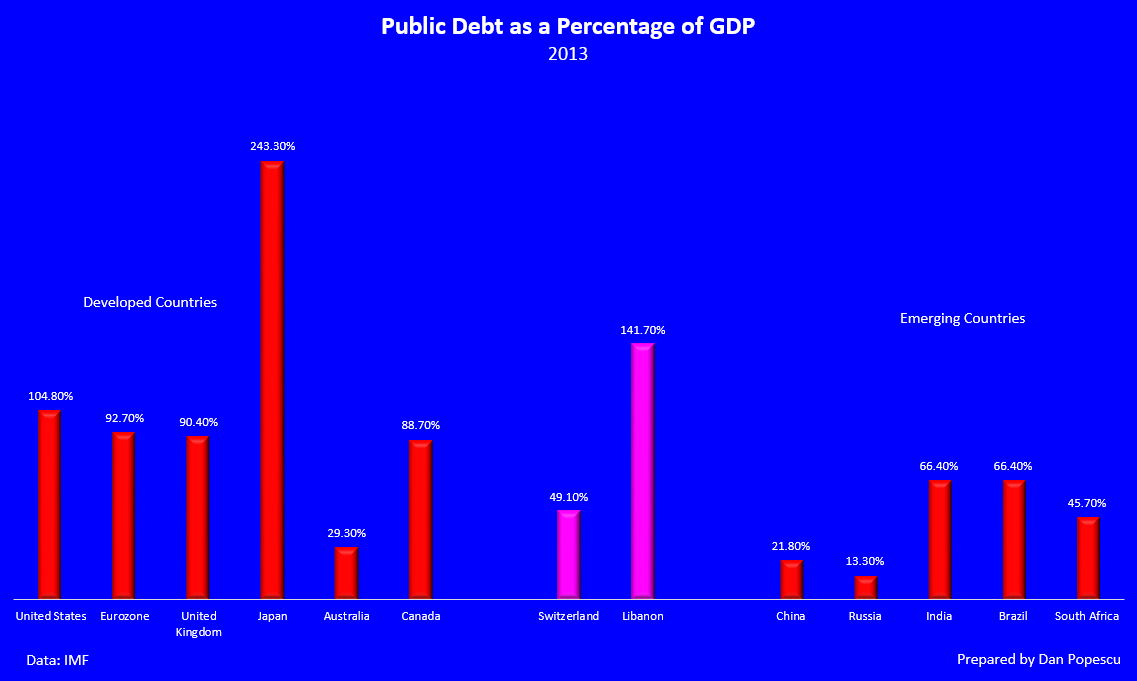