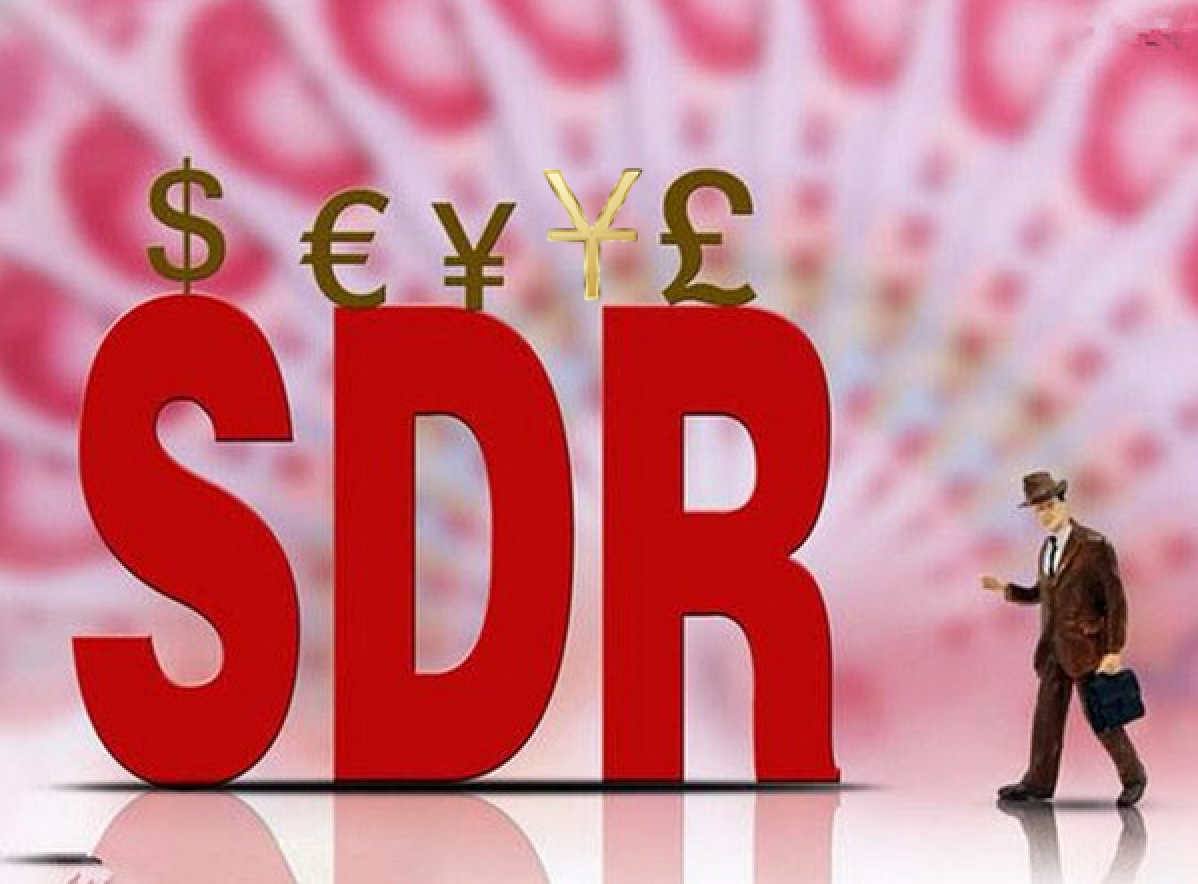 In recent months we saw a major offensive by China in support for the SDRs while, at the same time, we saw a slowdown, but not a stop, in gold buying for its international reserves. What can we make of it? Is this a change in China’s strategy in favour of fiat SDRs and away from hard gold?

There were several IMF staff notes published in the last six months about the SDRs. China also announced its intention to diversify its international reserves from the US dollar to SDR and is supposed to have already acquired in secret billions of SDRs on the secondary markets through the IMF. Already in 2009, right after the financial crisis, in an article, the president of the People’s Bank of China (PBoC), Dr. Zhou Xiaochuan, proposed that the US dollars be replaced by SDRs. Recent statements and actions indicate a preference by China for the SDRs.

However, in a recent article, I argued that China understands very well the risks and weaknesses of the SDR and it is preparing itself for a possible failure of the SDR by accumulating gold. SDRs are a composite of four fiat currencies and, starting October 2016, five currencies which are at the core of the problems in the international monetary system. In a systemic collapse this diversification is worthless. In the same article, People’s Bank of China’s (PBoC) Dr. Zhou Xiaochuan argued for reforming the international monetary system by saying that, “The desirable goal, therefore, is to create an international reserve currency that is disconnected from individual nations and is able to remain stable in the long run, thus removing the inherent deficiencies caused by using credit-based national currencies.” The key words here are “disconnected from individual nations”, which means from local currencies (US dollar, euro, pound, yen, Yuan). He also called the SDR “the light at the end of the tunnel for the reform of the international monetary system.” He also stated that, “Special consideration should be given to giving the SDR a greater role. The SDR has the features and potential to act as a super-sovereign reserve currency” IF it is disconnected from underlying currencies.

The recent creation by China of a new world bank, the Asian Infrastructure Investment Bank (AIIB), to compete with the World Bank, which is mostly controlled by the United States, shows that China is preparing for a possible conflict with the U.S. in the process of de-dollarisation of the international monetary system. China has been building support from the international community to bypass the U.S. in case of U.S. obstruction.

I said several times that in order for the SDR to function there must be consensus at the international level and, especially, within the G20 or, at least, the G5 (U.S., EU, China, Russia, Japan). I have been following the G20 meetings closely, especially for that purpose. The recent meeting of the G20 in Hangzhou, China has showed that behind the appearance of consensus there is strong disagreement between the U.S. and, especially, China and Russia.

Even before the start of the G20 summit China showed that behind the public image of consensus, China and the U.S. had no intention to compromise. Do not underestimate the importance of the stair incident at the airport at the arrival of U.S. president Obama in China. Every detail during an official visit is very well prepared long in advance by protocol from both sides. Forcing the United States president to descend from the U.S. presidential plane by a back door with no red carpet is a very strong message of conflict between the U.S. and China and strong resistance from the U.S. Symbolism is very important in geopolitics. Contrast this reception with that of Russia’s Vladimir Putin and other world leaders.

Row on tarmac an awkward G20 start for U.S. and China 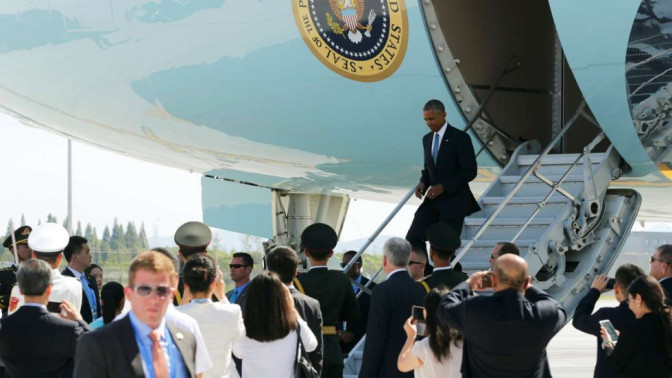 It has been my interpretation that China is using the SDR as a step towards a reset of the international monetary system and not as an end in itself. China understands the pitfalls and flaws of the SDR in its present form, as the PBoC president stated it in his 2009 article. China understands it can’t do it alone and it is using an excellent strategy taken from Sun Tzu’s The Art of War, written 2,500 years ago. The Chinese grand strategy is a long-term strategy that entails encircling an enemy by building up one’s coalition while simultaneously undermining the opponent’s coalition to prevent him from encircling you. In the last two years, China has signed several trade agreements with the clear intention of eliminating the dollar as much as possible from international trade and, I would say, very successfully until now. This is a process of de-dollarisation of the international monetary system. A recent post on the global de-dollarisation process on IMF’s website is a strong challenge to the U.S. and the dollar.

Despite its push for the SDR, China has continued to accumulate large amounts of gold. This is a hedge against their exposure to the US dollar, but it also provides some insurance in case of a U.S. veto of the reset of the international monetary system. It is clear to me that Russia is a strong partner of China in this de-dollarisation process. In an article last year I called gold the dollar’s Achilles’ heel. It is the title of a chapter in Currency Wars, a Chinese book written in 2007 by a Chinese author, Hongbing Song, never translated in English, but it was translated in French, which is supposed to be widely read in China by the country’s leaders.

China understands very well that a move as proposed by the IMF towards a “multiple reserve currency system” based on the SDRs, which is based on the underlying national currencies (US dollar, EU euro, British pound, Japanese yen and, soon, the Chinese Yuan) will not last. It also understands what Robert Mundell, Nobel prize of economics, said in a lecture (The International Monetary System in the 21st Century: Could Gold Make a Comeback) in 1997:

Russia’s president Vladimir Putin also told foreign journalists at the St. Petersburg Economic Forum in 2014: "For us [Russia and China], it is important to deposit those [gold and currency reserves] in a rational and secure way… and we [China and Russia] together need to think of how to do that, keeping in mind the uneasy situation in the global economy." This has led me to speculate that China and Russia are collaborating and might even collude in the gold market.

I believe China and Russia and India as well, but in a different way, are accumulating gold with an objective of around 9,000 tonnes, which would place them in the Majors club. The U.S. has about 8,000 tonnes and the Euro Area close to 11,000 tonnes. India, with about 18,000 to 30,000 tonnes of gold – with private and temple gold – is trying to monetise it, like Turkey, to achieve this same 9,000-tonne objective. 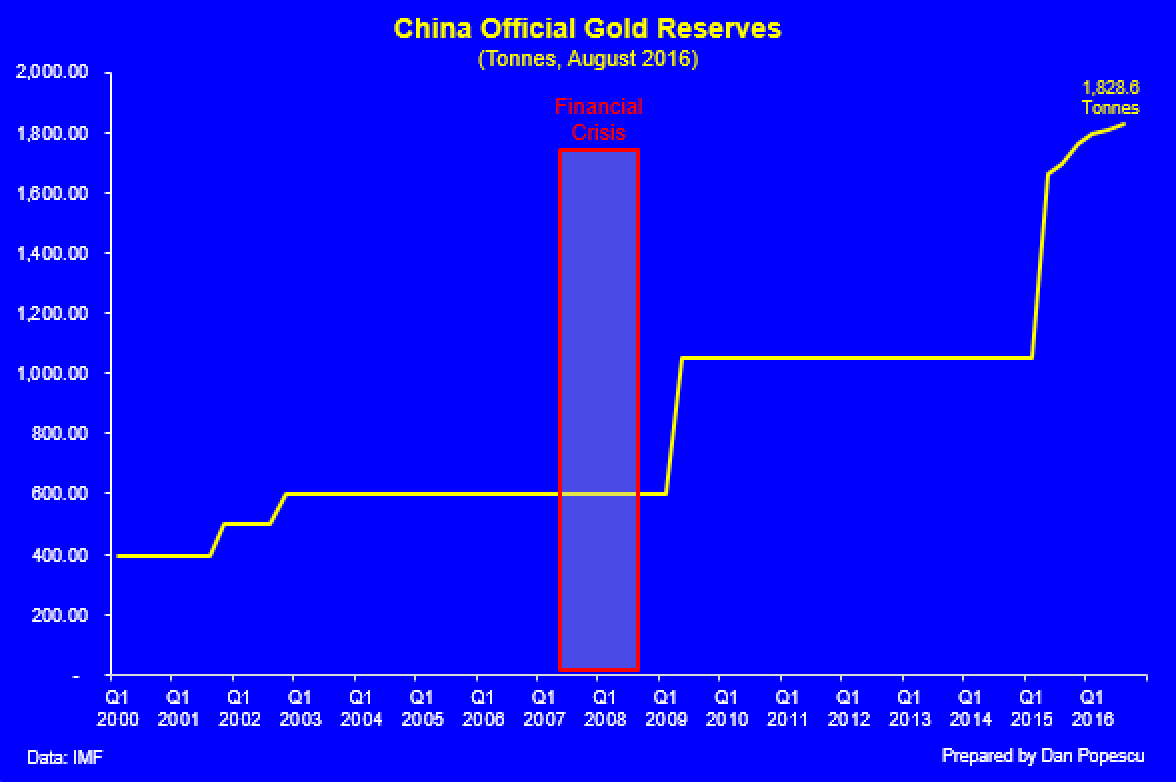 China is supposed to have accumulated approximately 18,000 tonnes of gold in recent years. There are now approximately 100,000 jewellery outlets in China, stocking mostly 24-carat products, according to a World Gold Council report. The Chinese market is dominated by plain, 24-carat products, which represent about 85% of the market by volume. According to a Chinese official, China’s leaders regard the public’s gold holdings as part of the nation’s reserves that could be called upon in an emergency. As you can observe in the chart below, China has been accumulating large amounts of gold for its official international reserves. In China and India gold is synonymous with money. 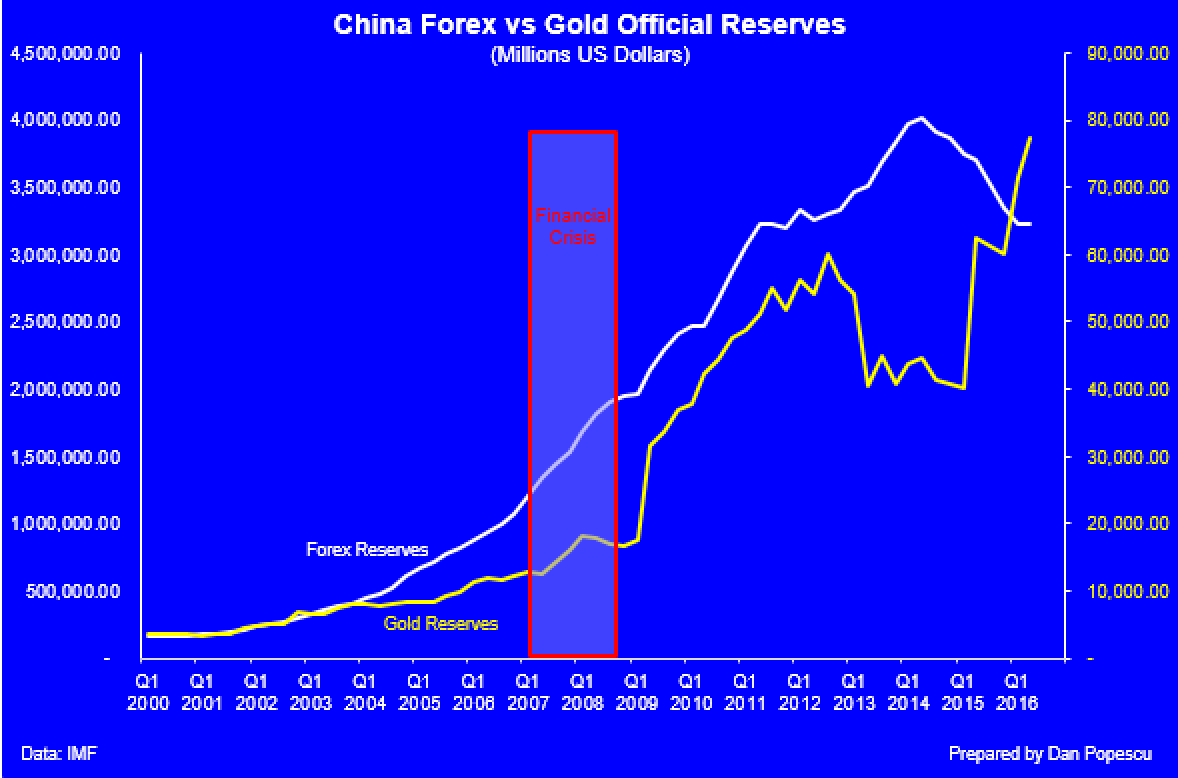 As of September 2016 China is supposed to have accumulated 1,828 tonnes. It has been my view that China is under-reporting its official gold reserves and that it has somewhere around 4,000 to 6,000 tonnes of gold already, but under a different account than that of the PBoC, ready to be transferred to the PBoC when strategically in China’s interest. Several Chinese institutions under the control of the PBoC hold large amounts of gold. State Administration of Foreign Exchange (SAFE) and China Investment Corporation (CIC) are owned by the PBoC and buy gold for the PBoC. The Shanghai Gold Exchange (SGE) also holds large amounts of gold and is also owned and under the control of the PBoC. So-called private banks, which are actually majority-owned by the Chinese state, also hold large amounts of gold. Also China is supposed to have studied very closely South Korea’s experience after the 1997 economic crisis, when it asked its citizens to sell their gold to the state. Remember what I said earlier that, according to a Chinese official, China’s leaders regard the public’s gold holdings as part of the nation’s reserves.

The two charts below show the accumulation of gold by China since the 2008 global financial crisis. It remains that China is far behind Russia with only 2.4% of its international reserves in gold, versus Russia which has 16.5%, well above the 10% level recommended by former IMF economist Kenneth Rogoff in a recent article. 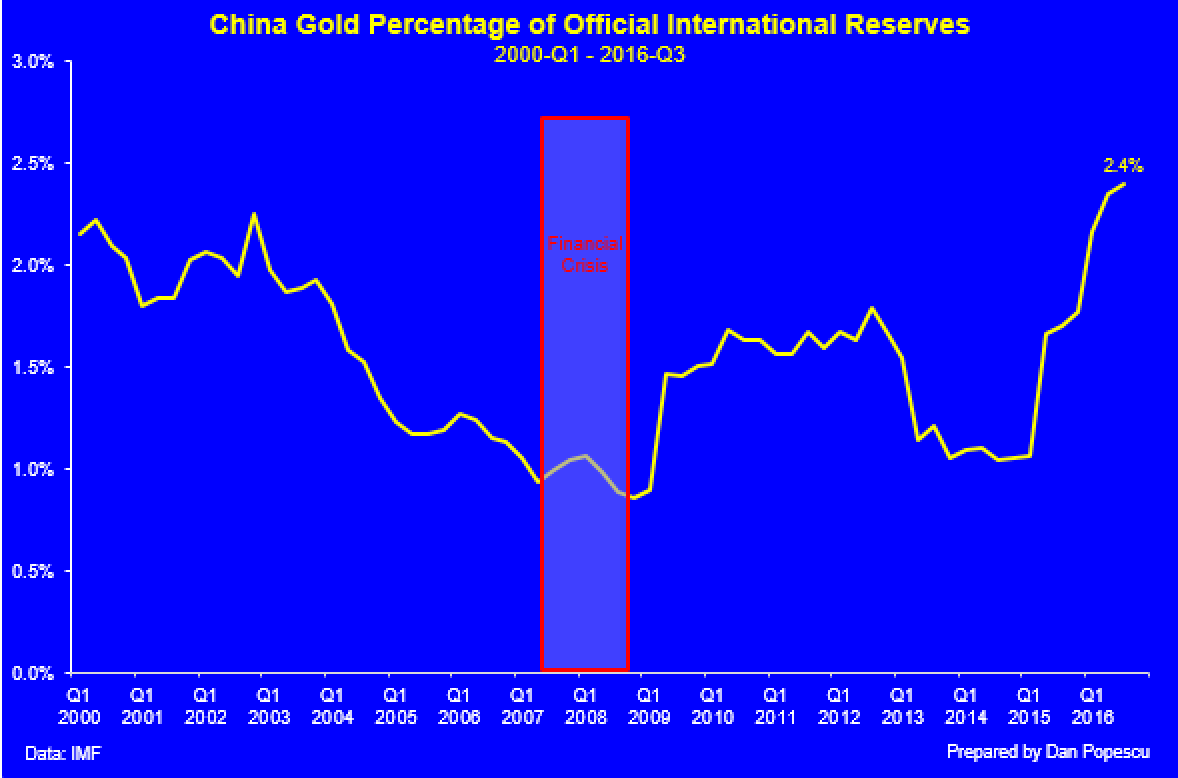 Another way to look at gold reserves is as a percentage of GDP, which is a better measure than the percentage of gold in international reserves of the true money available to support the economy, and which presages the relative power of a nation if a new gold standard were to be introduced. In the chart below we can see that Russia is in a very good position while China is far from the U.S., the EU, Russia and the world average of 1.6%. 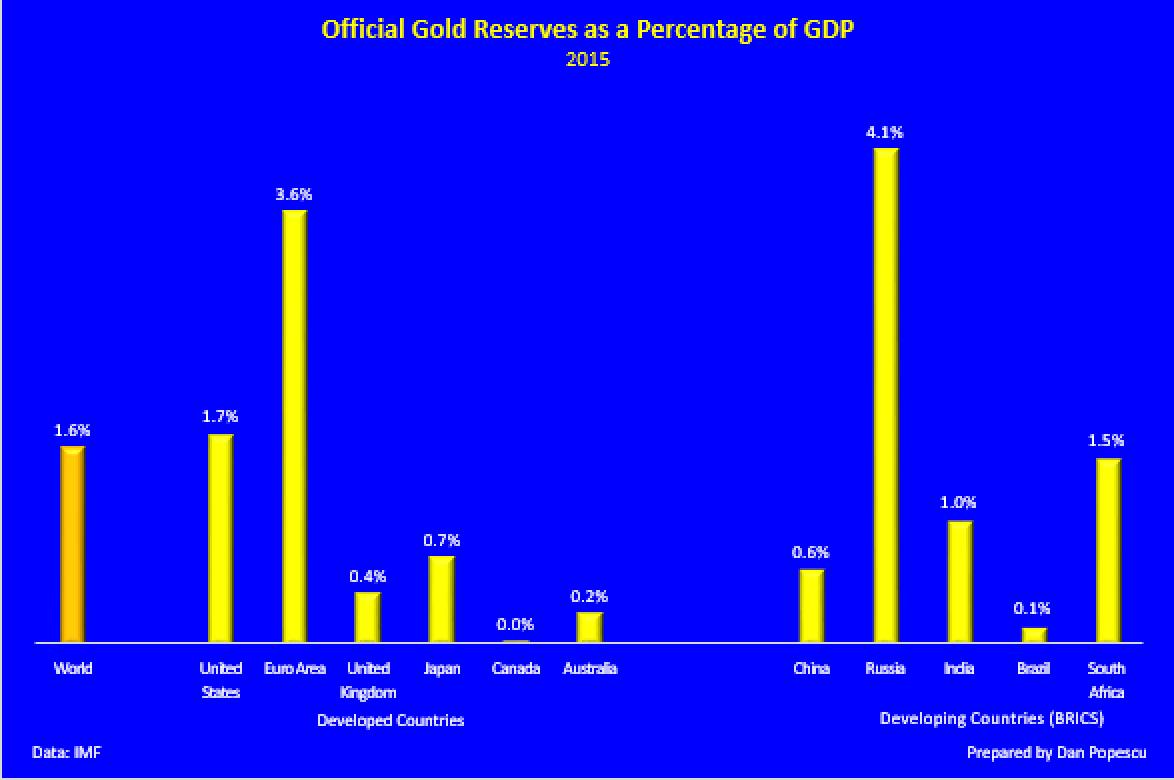 Last year China and Russia have been the largest purchasers of gold for their international reserves, with China representing 36% of official sector gold purchases. Combined, China and Russia purchases represent 84% and, despite some decrease in buying in early 2016, it looks like Russia and China are continuing to buy large amounts of gold for their international reserves. 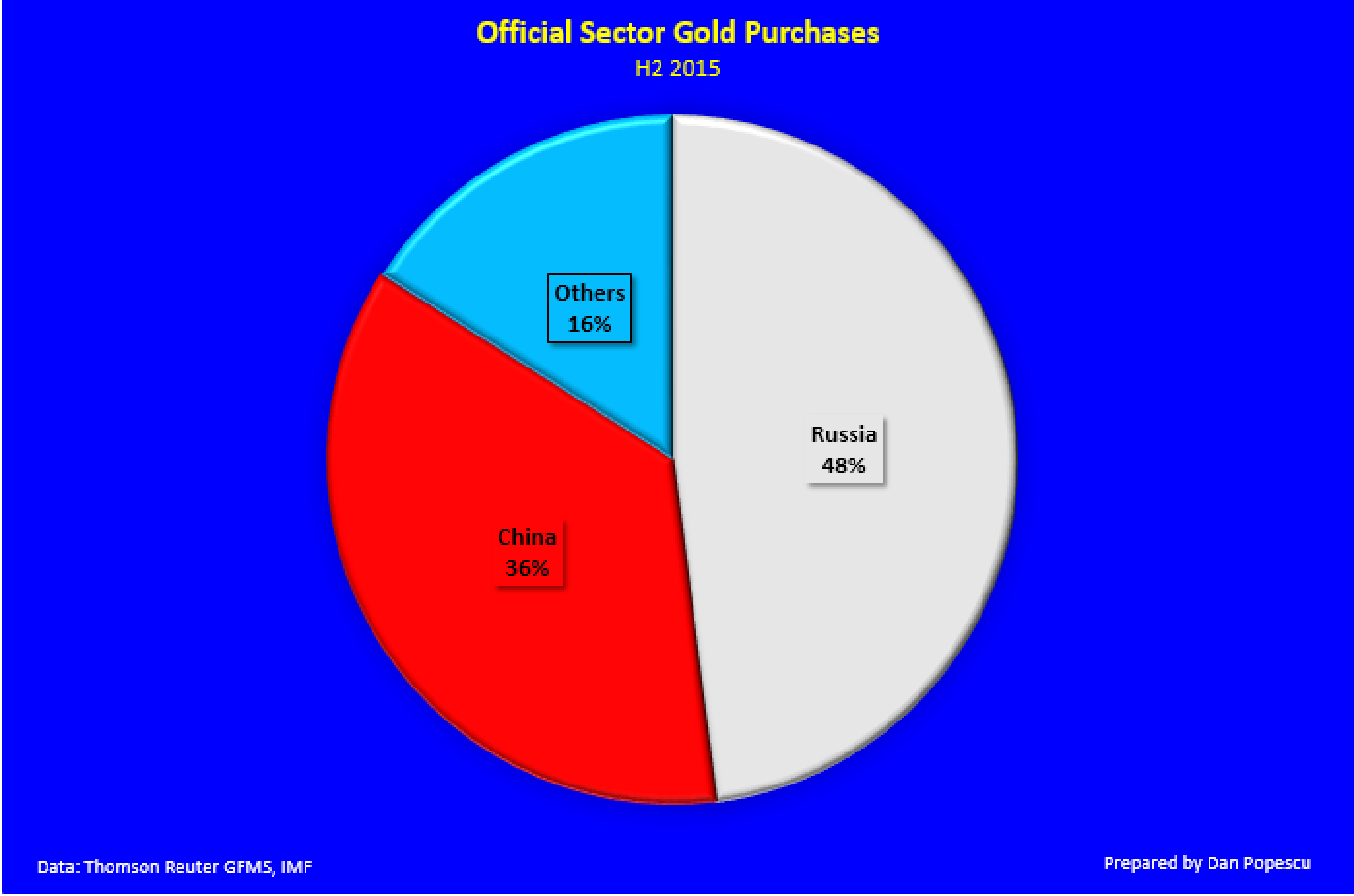 As I said earlier, I think the SDR is just a step in the long strategy of China to eliminate the dollar’s “exorbitant privilege” and that gold will play a major role at the negotiating table. If international consensus at the G20 fails, China is preparing itself with gold. Gold is a strategic asset used both by China and Russia in their war against the U.S. “hegemon” and is the dollar’s Achilles’ heel. Remember also that the SDR is as good or bad as the underlying currencies. If they collapse, so will the SDR.

There are different measures of money supply (M3, M2, M1, M0), says Jim Rickards in his latest book, The New Case for Gold. In a money economy, he adds,“you can say that the country’s gold holdings are the real money. He calls a country’s gold reserves gold “M-subzero”.

Gold is viewed both by China and Russia as a strong negotiating card in the reset of the international monetary system, and they will continue to accumulate it until they join the 9,000-tonne club. 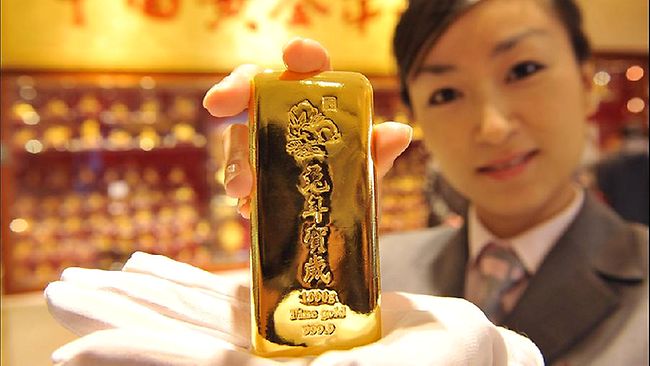