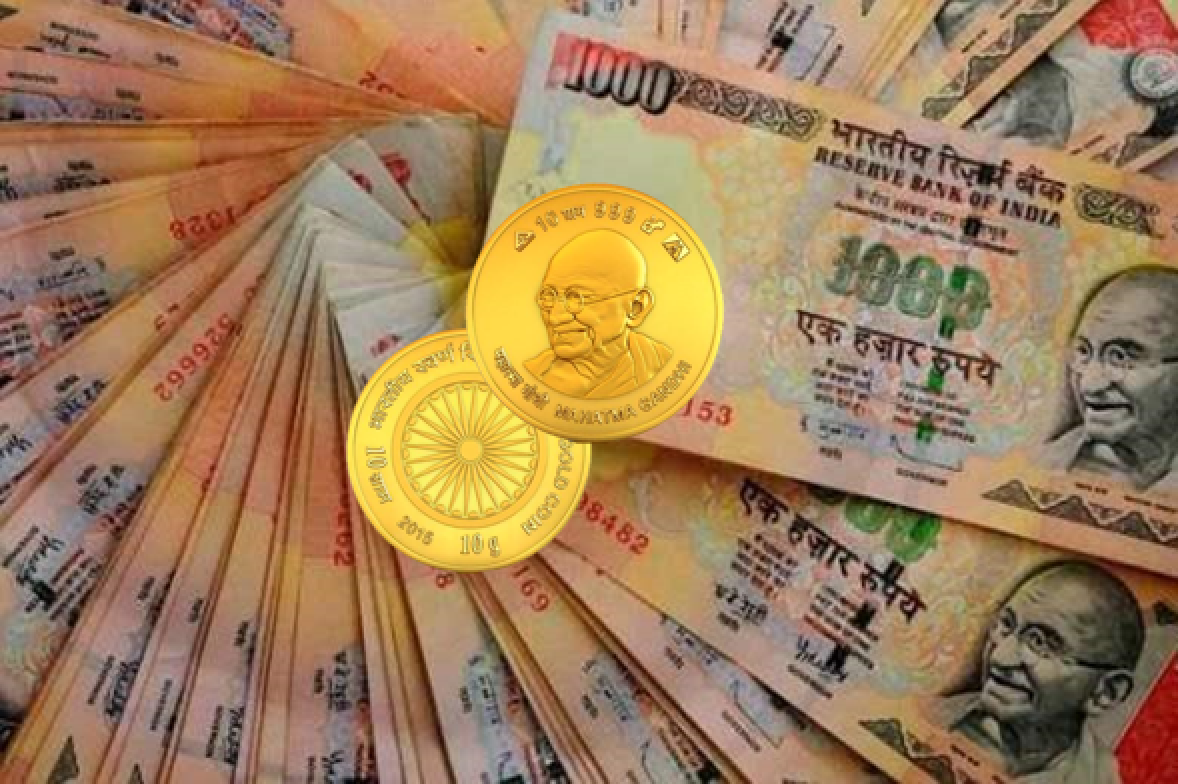 I just finished reading Kenneth Rogoff’s book, The Curse of Cash, when the rupee notes crisis erupted in India. Rogoff’s book is a defense of banning cash (paper/plastic and coins).

On November 8, also the day of the U.S. election, Narendra Modi, Prime Minister of India, made a surprise announcement that had been kept secret, even from many in the Indian government, that 500 and 1000 rupee notes would no longer be legal tender within 24 hours. The Prime Minister cited the need to fight corruption as justification for the removal of the 500 and 1000 rupee notes. The removal of the 500 and 1000 rupee notes in effect demonetized 86% of India’s existing cash. Half of India’s citizens do not have a bank account and around 25% do not even have an ID card. 97% of the Indian economy is cash-based. This decision made 88% of all outstanding currency no longer usable.

Prime Minister Modi attempted to downplay the shocking ban of existing 500 and 1000 rupee notes by telling Indians that, while they could no longer use the notes effective almost immediately, over the next sixty days they could deposit them in their accounts at the banks and post offices across the country, or they could exchange the notes for new 500 and 2000 rupee notes. Exchanging the old notes, however, has been problematic as the banks do no have enough of the new notes to meet the exchange demand, creating long lines. In some instances, the banks have been forced to use coins to complete the exchanges.

Indians are now converting whatever they can into gold, silver, and hard currencies like the US dollar but, however, they are all trading at huge premiums. Gold in India has shot up to as much as $2,800 per ounce – if you can find it – while it was $1,282.35 in London (LBMA p.m. fix). The retail price of gold jumped between 15% and 20% within 10 hours on November 9. On the night Narendra Modi announced his decision to curb black money, Mumbai bought gold and bullion worth Rs. 16 crore, a jump of 23 times from the city's collective sale of Rs. 69 lakh from the previous day. As much as 250 kg of gold was reportedly sold in Mumbai within a few hours of the announcement. Remember also that because of taxes and restrictions, already most of the gold entering India is brought in by smugglers. 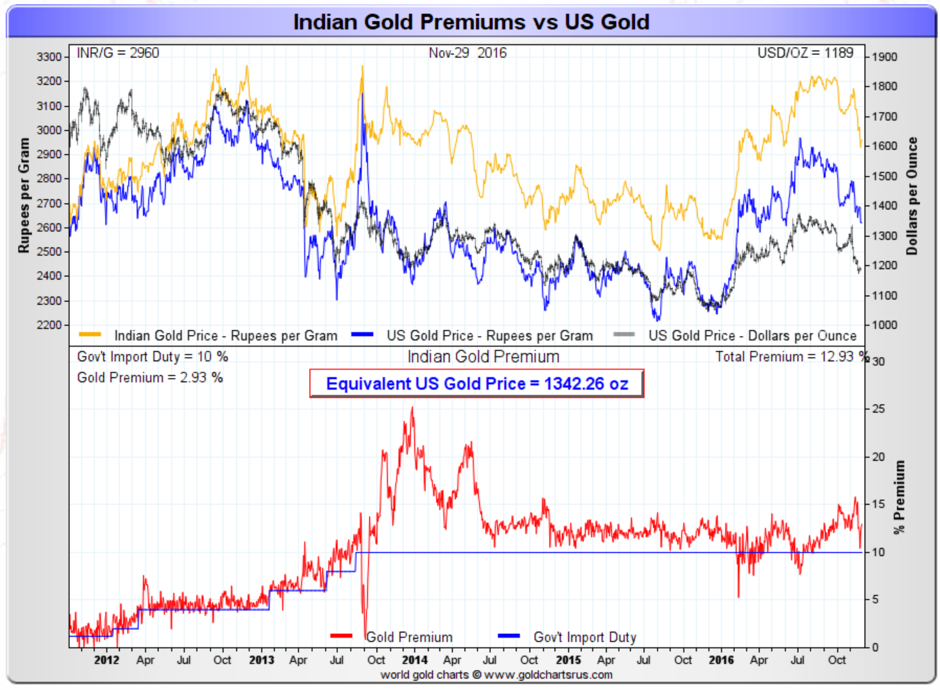 Just as Kenneth Rogoff and Citi’s economist Willem Buiter say, the main purpose of banning cash is because, if you eliminate physical currency and force people to use a debit card linked to a government controlled bank account for all transactions, you can effectively plan everything centrally. However, for both Prime Minister of India Modi and Mr. Rogoff to have this decision popularly accepted, it is necessary to argue that it is done to combat criminal activities that are detrimental to society. Peter Bofinger, leading German Keynesian economist, says, “Coins and bills are obsolete and only reduce the influence of central banks.” This is the main master plan that author Jim Rickards presents in his latest book, The Road to Ruin. Mr. Rickards argues that the elites (G20 and IMF leaders) have a master plan to hoard gold and substitute SDR as the currency of world trade and finance. For the plan to work they also must ban cash and gold. In India, we observe it through the attempt to monetise private and temple gold and now also banning large currency notes. This is not only an Indian phenomenon. In the U.S. and Canada the highest note is $100, in UK £50 and in EU €200. Recently the EU approved the end of the €500 note. The Swiss still have a 1,000 franc note.

Kenneth Rogoff doesn’t propose to ban private possession of gold because he believes it’s not necessary. According to Mr. Rogoff, gold has a very large value and is therefore not practical for small transactions. He forgets entirely silver, which is the poor man’s gold. He proposes to keep small denominations of paper/plastic money and coins temporarily, but to make the coins sufficiently large as to make them inconvenient to use, his final objective still being to ban cash totally. What he ignores is human ingenuity. India is showing us how fast people can react and find alternatives. Faced with excessive public debt, this extreme solution of banning cash is the only one that governments still have.

Rumours are that the government of India is also planning to ban the import of gold. Just like the restrictions did, I expect the ban to fail. Contrary to paper/plastic currency, the government of India has little control on gold. A conservative estimate is that there are about 186,200 tonnes of gold worldwide above ground. Out of this above ground gold it is estimated that about 10 to 16 percent is held privately by Indians and Indian temples. By comparison world central banks all together hold 18 percent. 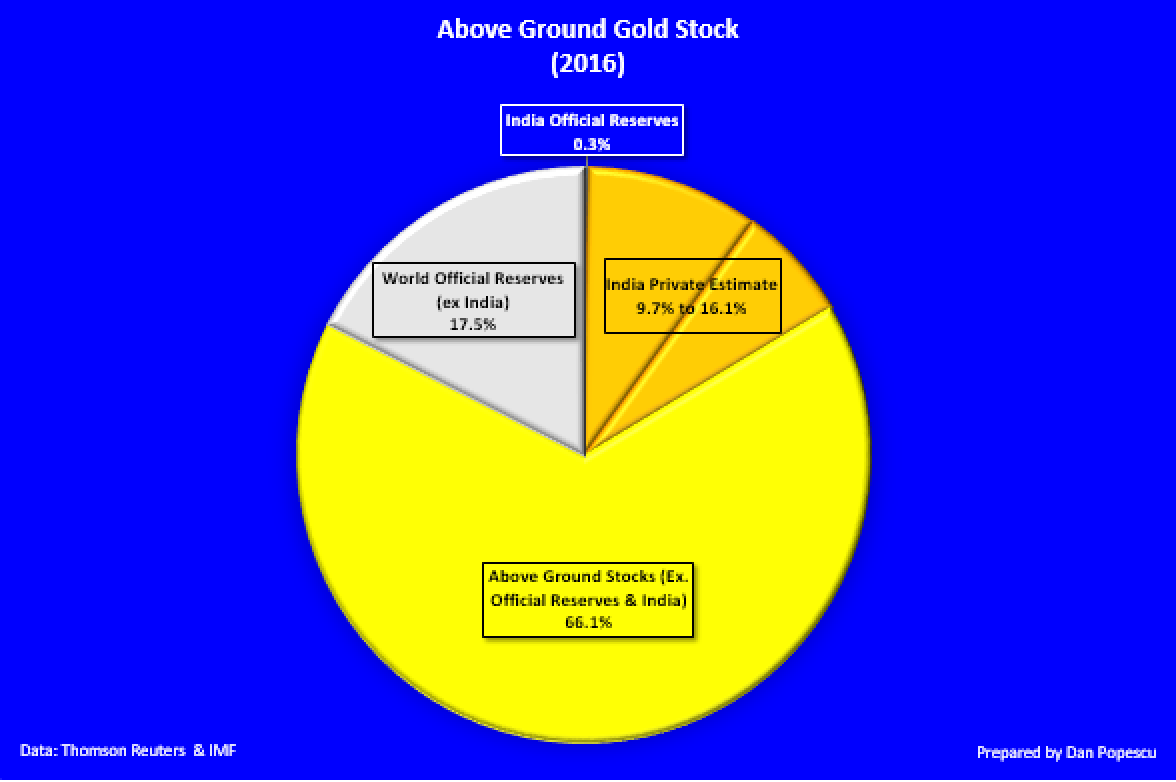 The Reserve Bank of India in July 2013 had imposed severe restrictions on gold imports to check the burgeoning current account deficit and sliding rupee, which led to a decline in official demand for gold of 26% to 190.3 tonnes during the January-March 2014 quarter. However, acts of smuggling gold into the country have multiplied alarmingly ever since the government imposed tight restrictions on gold imports, two years ago. There has been a sharp rise in cases of gold smuggling across all airports in the country. Singapore, Sri Lanka and the Middle East countries are the key sources from where gold in huge quantities is smuggled into India by air.

Gold premiums in India confirm that the demand for gold has not been curtailed much by the restrictions; it only boosted black market demand. According to a Reuters article, one senior official involved with government policy-making on gold said there has been no discussion on import curbs, but that supply has gone up through "unofficial channels". "If you see the premiums, you know that there is demand," the official said, speaking on condition of anonymity. Again, according to the same Reuters article, in domestic markets, jewellers are charging premiums as high as 50 percent, but have not committed to buying any new gold. Panic gold buying began on Tuesday evening as soon as Prime Minister Narendra Modi came on television to announce demonetisation of the Rs 500 and Rs 1,000 notes.

Recently we read more and more articles about academic or government studies to ban cash. What they actually mean is to ban paper/plastic and metal coins and force everybody to use electronic currencies. Why? Is it because it’s more efficient or better? Well, that is what governments and their supporters want you to believe. In reality, they have a more devious motive, and that is to have absolute control over your currency so it can be more efficiently devalued, taxed or purely confiscated.

Confiscating gold and silver coins was possible but very inefficient, expensive and hard. To achieve inflation for the Roman Empire they had to get the coins back and remint them with less gold or silver. With paper currency, it was easier since the state was able to print as much as it wanted, but it still was not perfect. What is great for the sovereigns with electronic money is that it is not in your physical possession anymore and with just a click, the state can cut access to your money. Limits on cash withdrawals from ATM machines already exist.

The performance of gold in Indian rupees certainly confirms that gold for Indians is an excellent hedge against inflation and devaluation of their fiat currency. Since 2000 gold has increased close to 10 times in Indian rupee terms and even after the recent drop, it is still 8 times higher than its 2000 level. The recent fiasco of demonetizing 86% of India’s existing cash will encourage even more Indians to buy and hold gold out of the banking system. 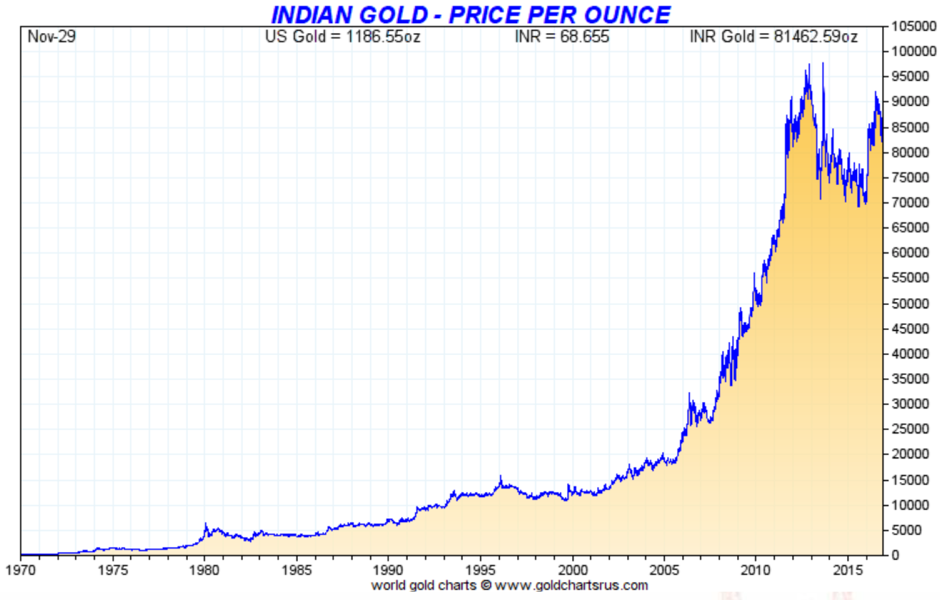 Nothing could have reinforced the lack of confidence in the banking system more and persuaded the ‘black’ financial system to remain than the chaos in which the removal of the 500 and 1000 rupee notes was done. It confirms gold as the foundation of the ‘black money’ system in India, hidden from official eyes.