The Debauchment of the Currency 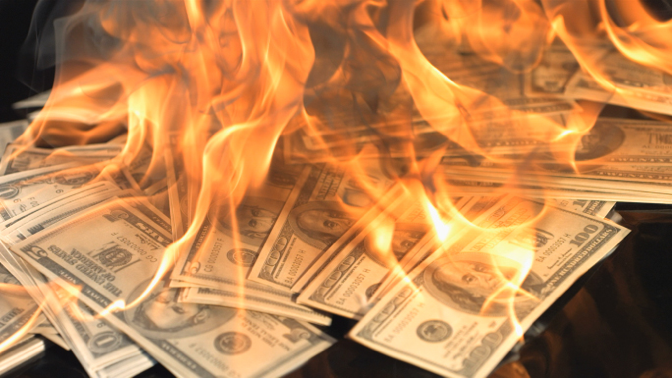 “Lenin is said to have declared that the best way to destroy the capitalist system was to debauch the currency. By a continuing process of inflation, governments can confiscate, secretly and unobserved, an important part of the wealth of their citizens.

As the inflation proceeds and the real value of the currency fluctuates wildly from month to month, all permanent relations between debtors and creditors, which form the ultimate foundation of capitalism, become so utterly disordered as to be almost meaningless; and the process of wealth-getting degenerates into a gamble and a lottery.

Lenin was certainly right. There is no subtler, no surer means of overturning the existing basis of society than to debauch the currency. The process engages all the hidden forces of economic law on the side of destruction, and does it in a manner which not one man in a million is able to diagnose.”

Now let me tell you the story of the gold prospector who met St. Peter at the Pearly Gates. This story from Ben Graham that Warren Buffett likes to tell is actually about an oil prospector, but it’s just as fitting with a gold prospector.

When told his occupation, St. Peter said, ‘Oh, I’m really sorry. You seem to meet all the requirements to get into Heaven. But we’ve got a terrible problem. See that pen over there? That’s where we keep the gold prospectors waiting to get into Heaven. And it’s filled – we haven’t got room for even one more.’ The gold prospector thought for a minute and said, ‘Would you mind if I just said four words to those folks?’ ‘I can’t see any harm in that,’ said St. Peter. So the old-timer cupped his hands and yelled out, ‘Gold discovered in Hell!’ Immediately, the gold prospectors wrenched the lock off the door of the pen and out they flew, flapping their wings as hard as they could for the lower regions. ‘You know, that’s a pretty good trick,’ St. Peter said. ‘Move in. The place is yours. You’ve got plenty of room.’ The old fellow scratched his head and said, ‘No. If you don’t mind, I think I’ll go along with the rest of them. There may be some truth to that rumour after all.’

Keynes’ citation of Lenin and Buffett’s story explain perfectly why governments love inflation so much and hate gold or, more generally, hard assets. Inflation creates an illusion of unending uptrend in the value of assets. It also allows the state to tax without the people realizing it. If you price something in fiat (paper, electronic) currency, you can certainly believe prices always go up with just minor corrections. But if you price something in real currency such as gold, the picture changes totally. This is the illusion of inflation.

Here are some charts created by my good friend Nick Laird who has the best chart database for gold and silver at www.goldchartsrus.com. At my inspiration he has created a set of charts visually showing what has happened to the price of assets since the introduction of paper and electronic currency. You need neither words nor a Ph. D. to see the evident distortion created by government manipulation of the currency. For people like me, old enough to remember the early ‘70s, it is no surprise. My flying lesson in 1972 cost around $12 and today, on the same plane, a Cessna 150, it costs around $150. That is more than 10 times the cost with no technological improvement of any kind. This is just a personal example.

The first set of charts shows the distortion created in stock prices in the U.S. and the UK. 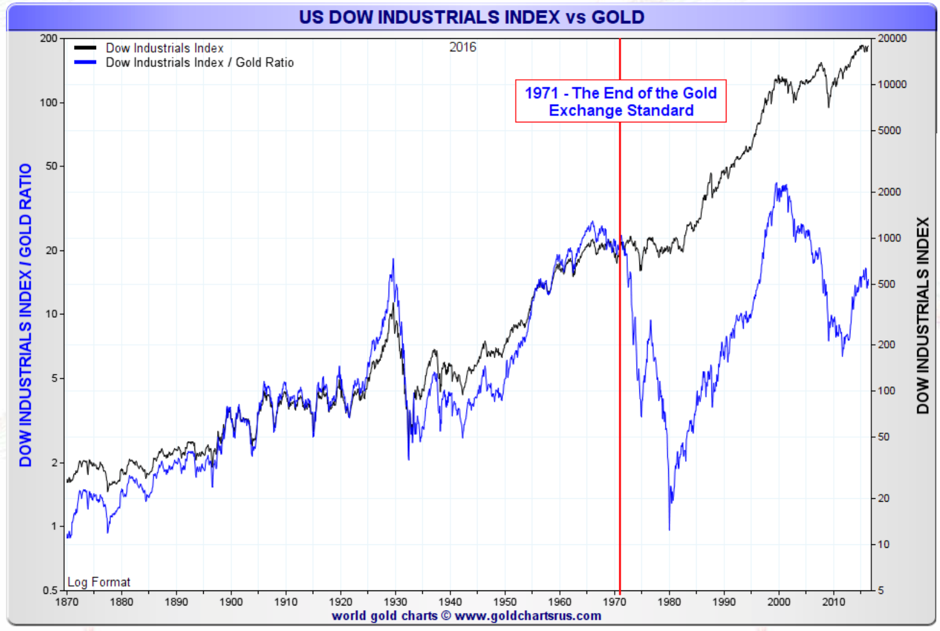 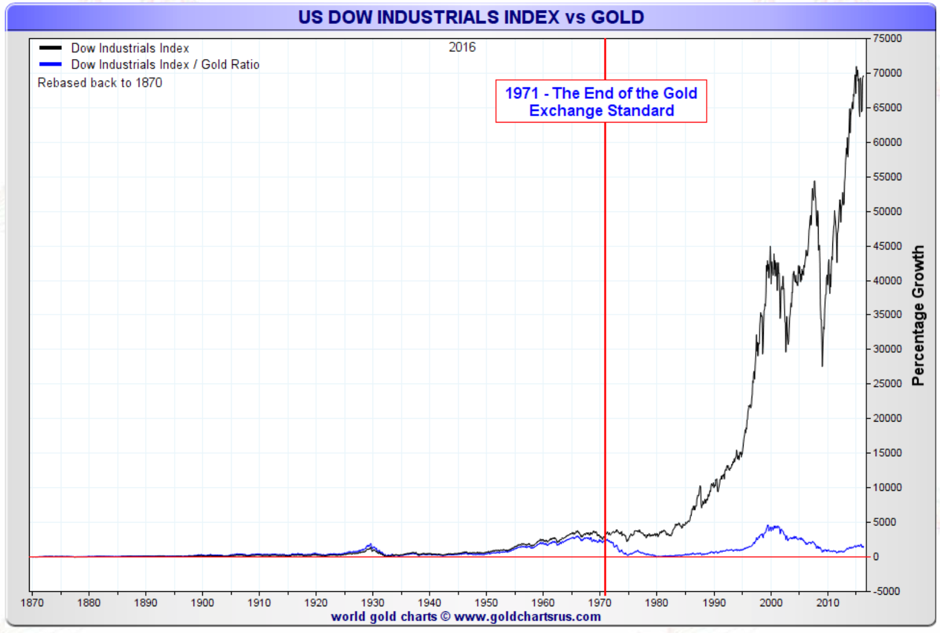 We hear constantly on the news that stocks are at all-time highs. As you can see in the chart below, stocks are nowhere near all-time highs when valued in real money. If history repeats itself it looks more like we are in a correction within a major bear market started in 2000 rather than in a bull market. This doesn’t exclude a continuation of the bull stock market in fiat currency and, at the same time, a larger decrease of the price of dollars in gold. This will push the real price (in gold) of stocks down rather than up. 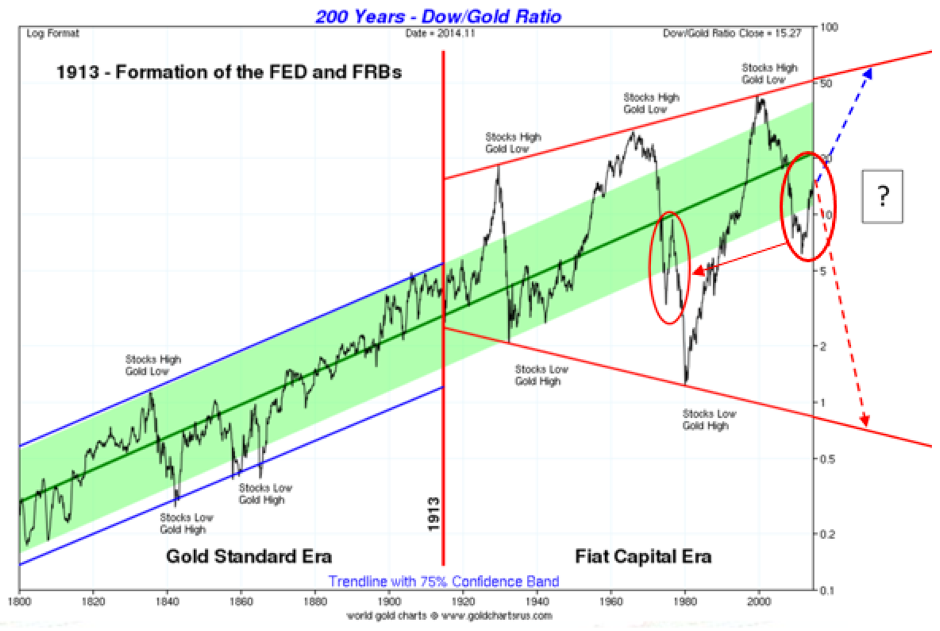 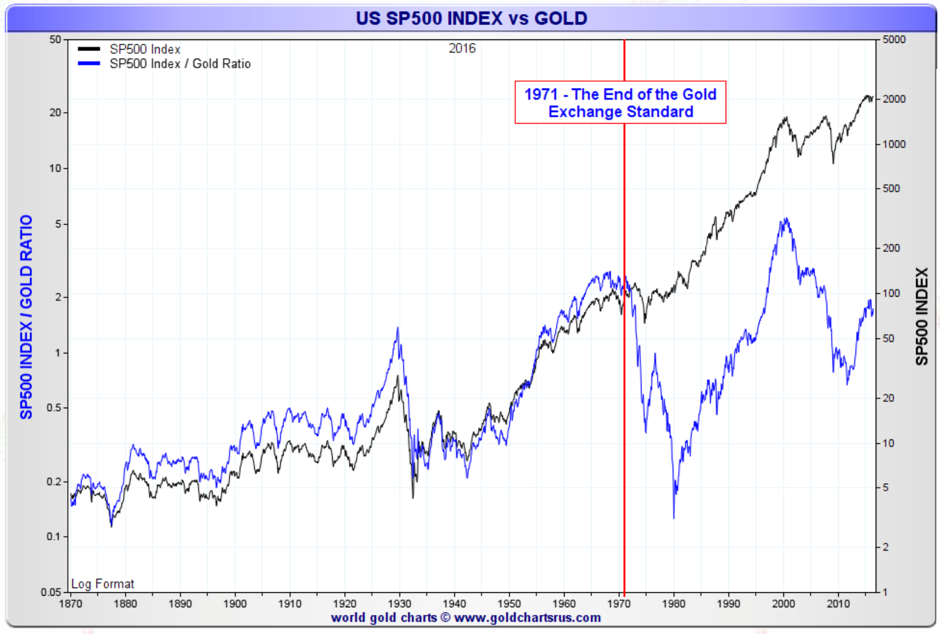 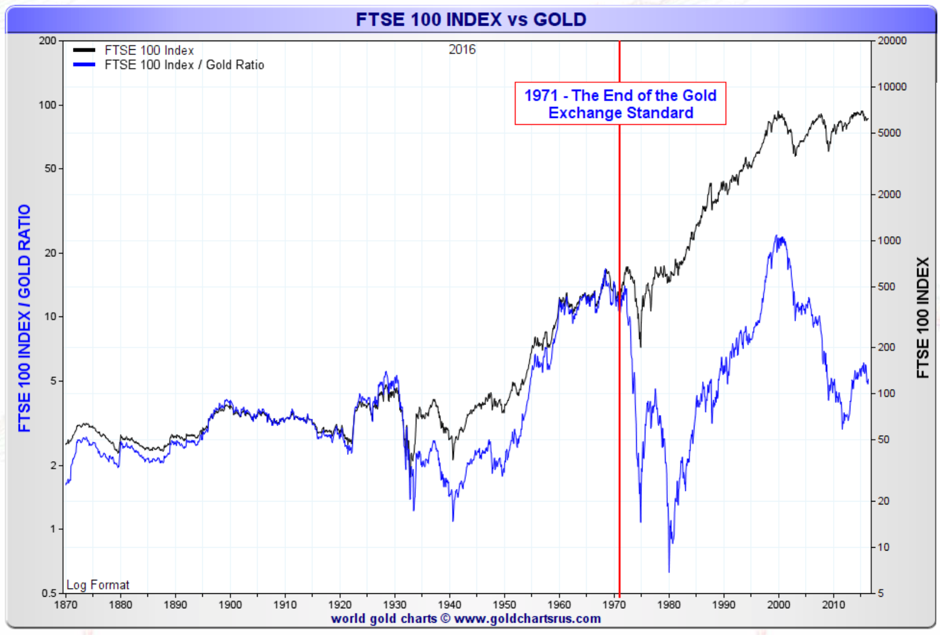 The next set of charts shows the distortion created in the price of commodities going from food like wheat and corn to industrial commodities like crude oil and gasoline. The Thomson Reuters CRB Commodity Index is an index of the most important commodities used. 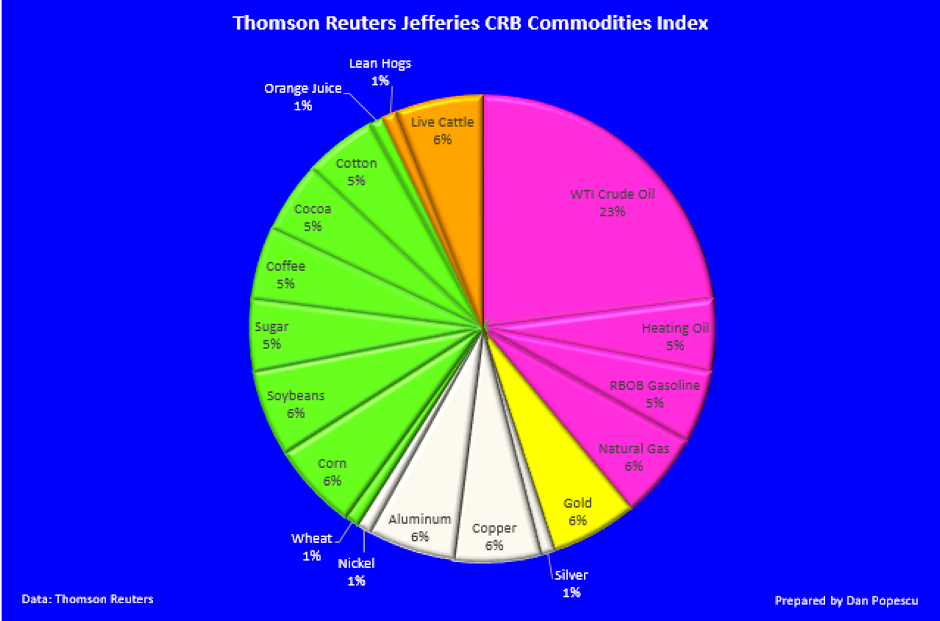 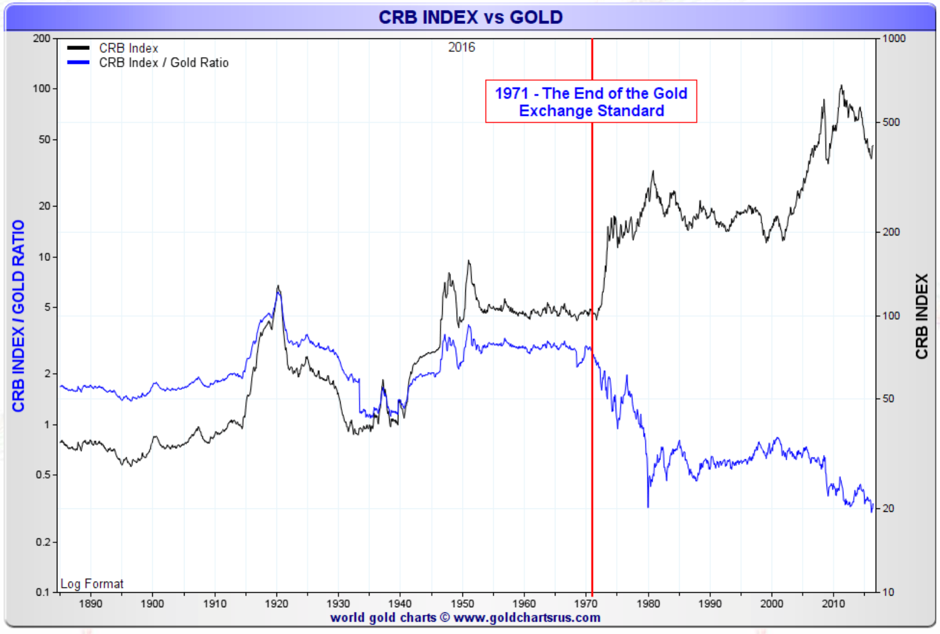 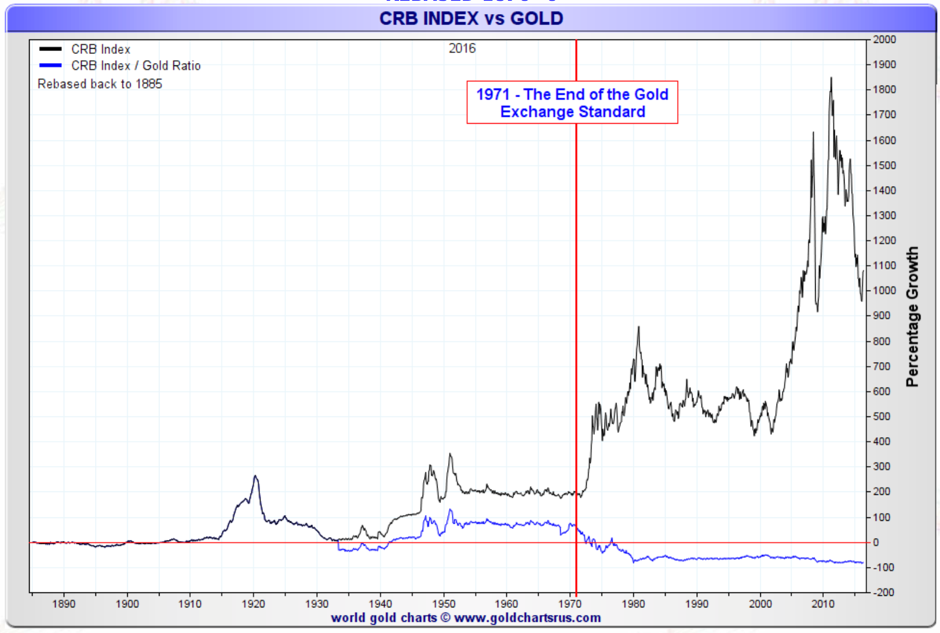 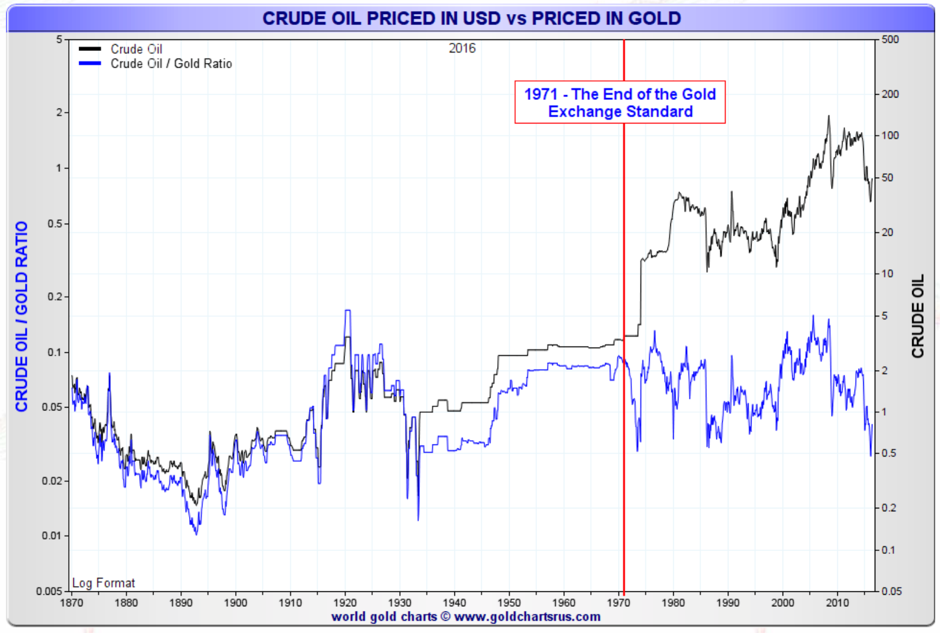 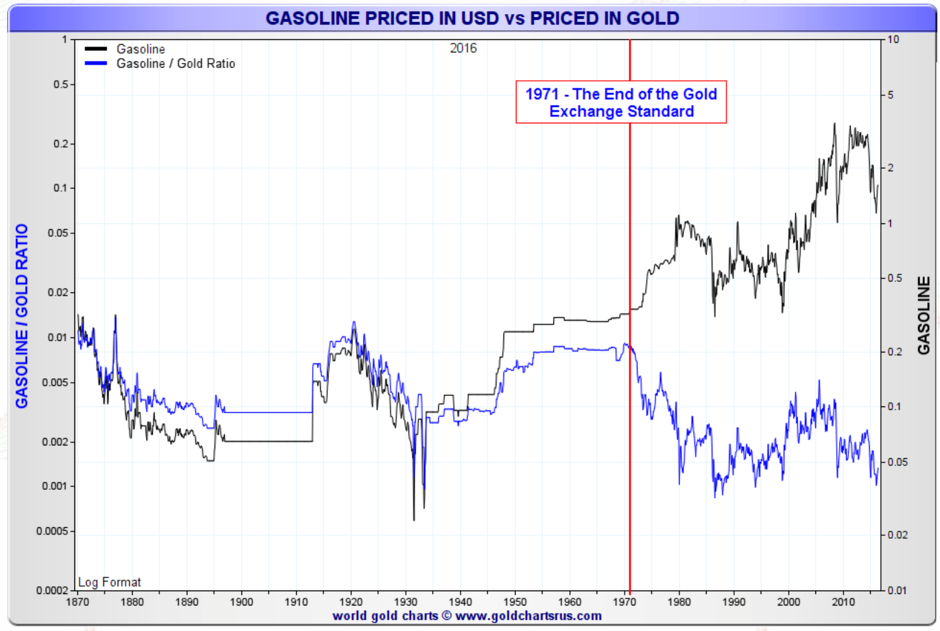 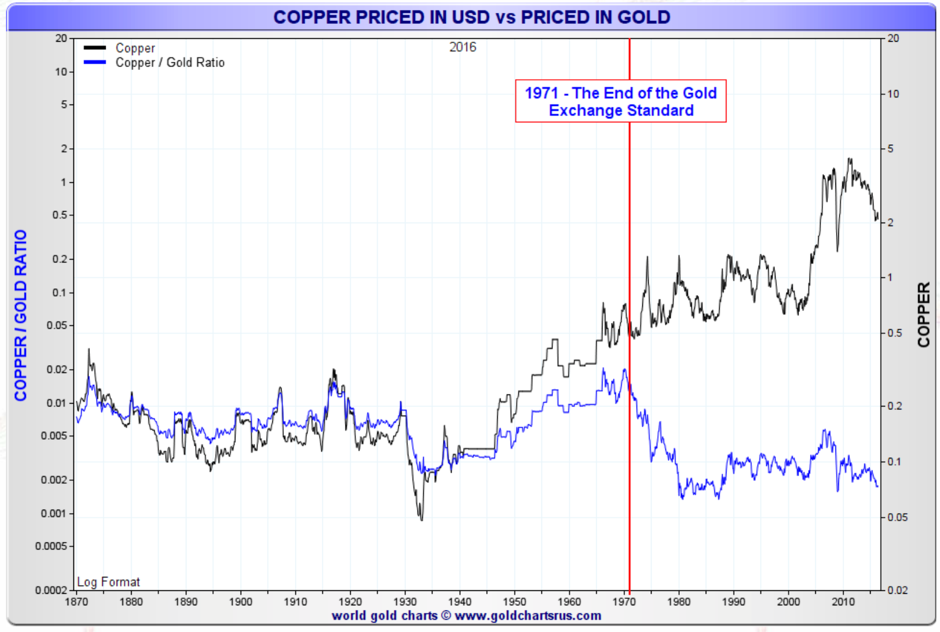 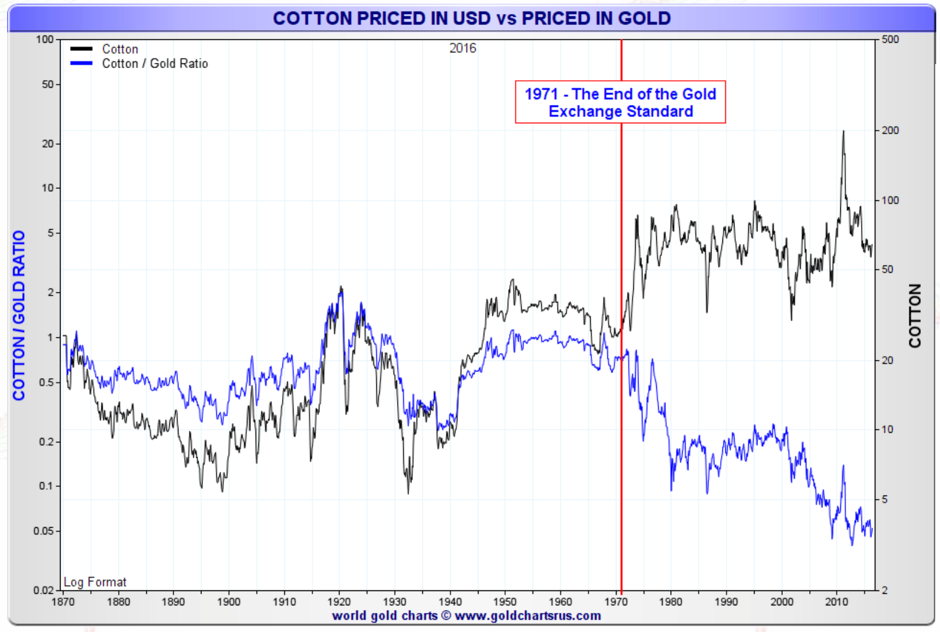 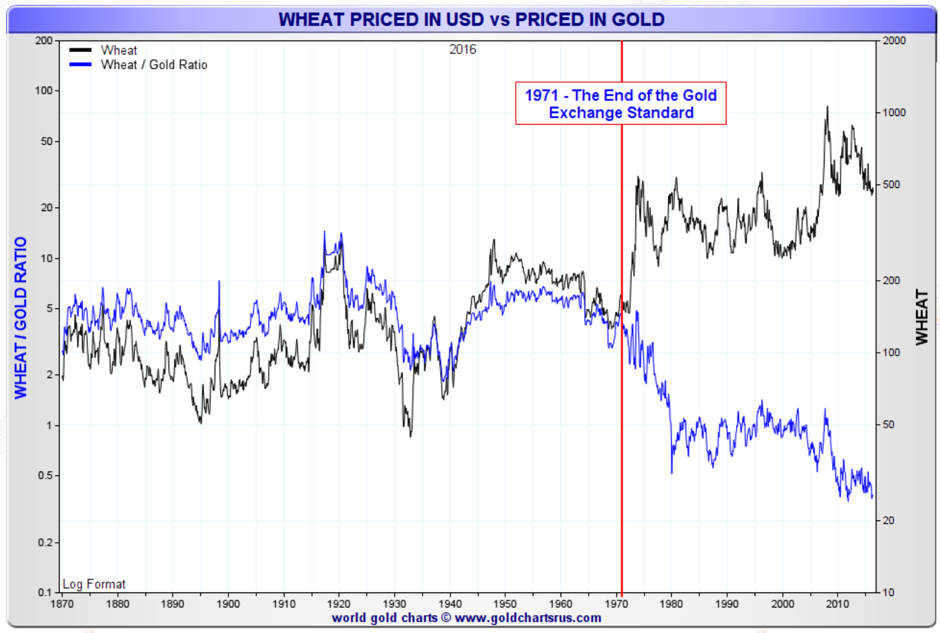 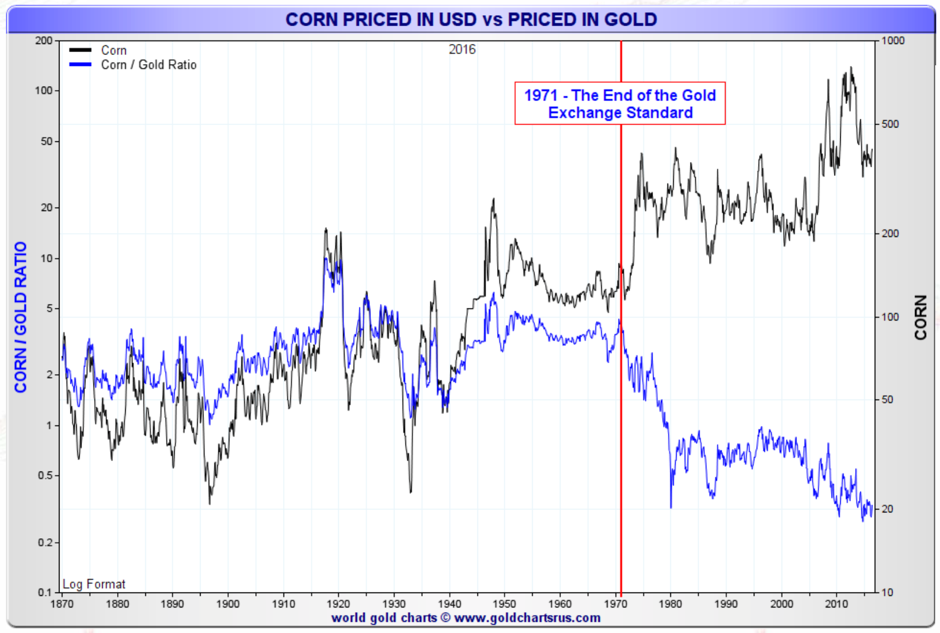 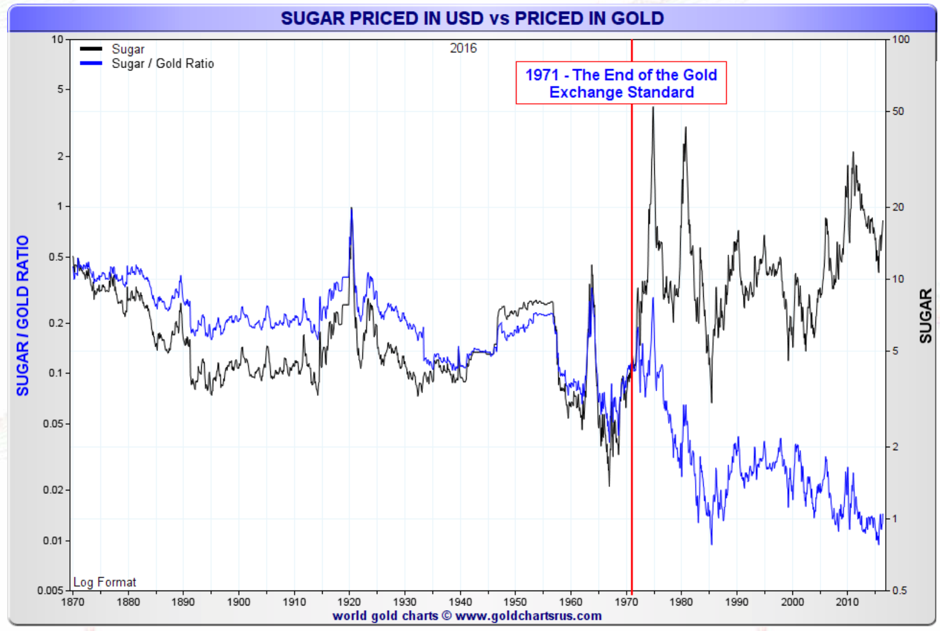 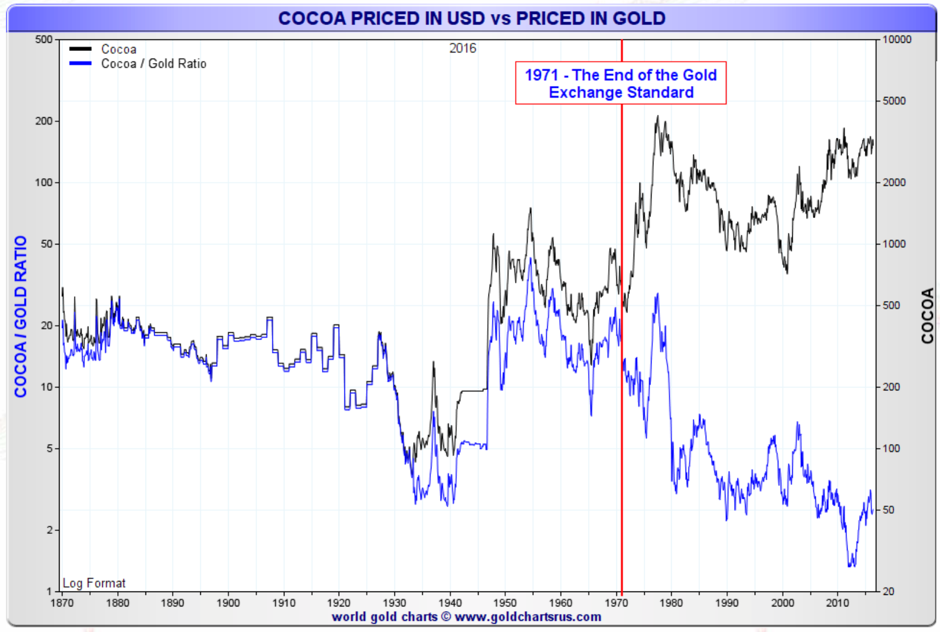 In Roy Jastram’s gold and silver charts below, we can also see the effect of inflation on the volatility of real assets since paper and electronic currency was introduced around 1900. (The Golden Constant & Silver: The Restless Metal, Roy W. Jastram). 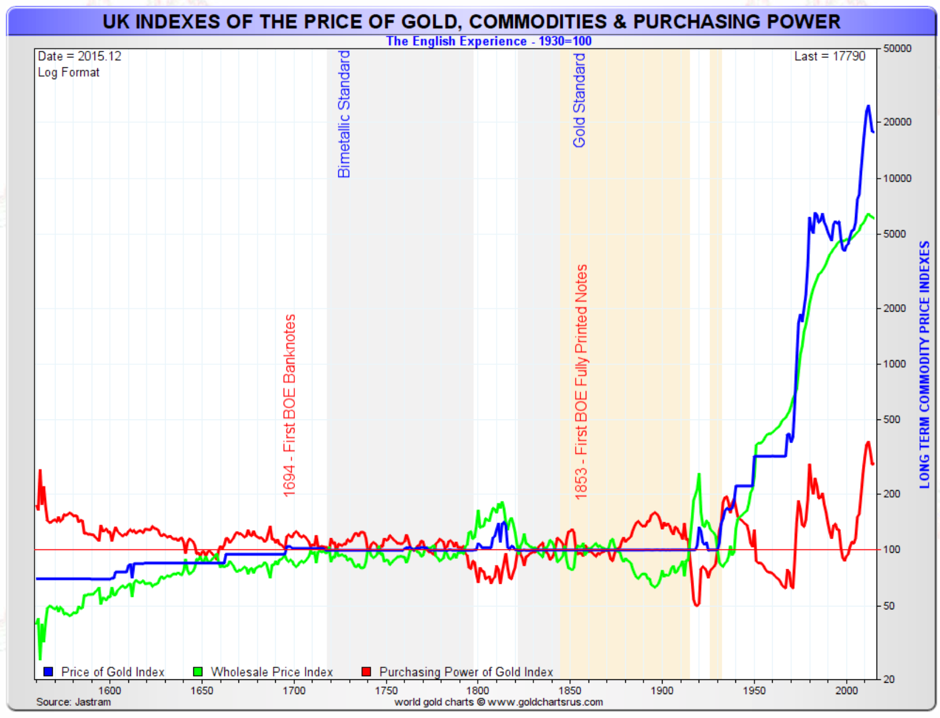 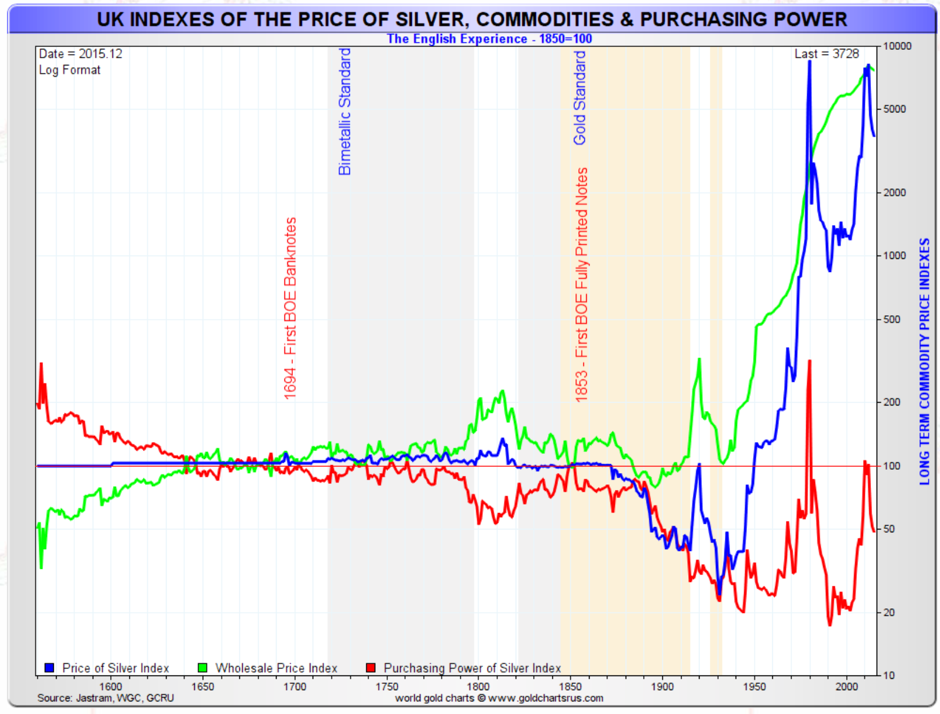 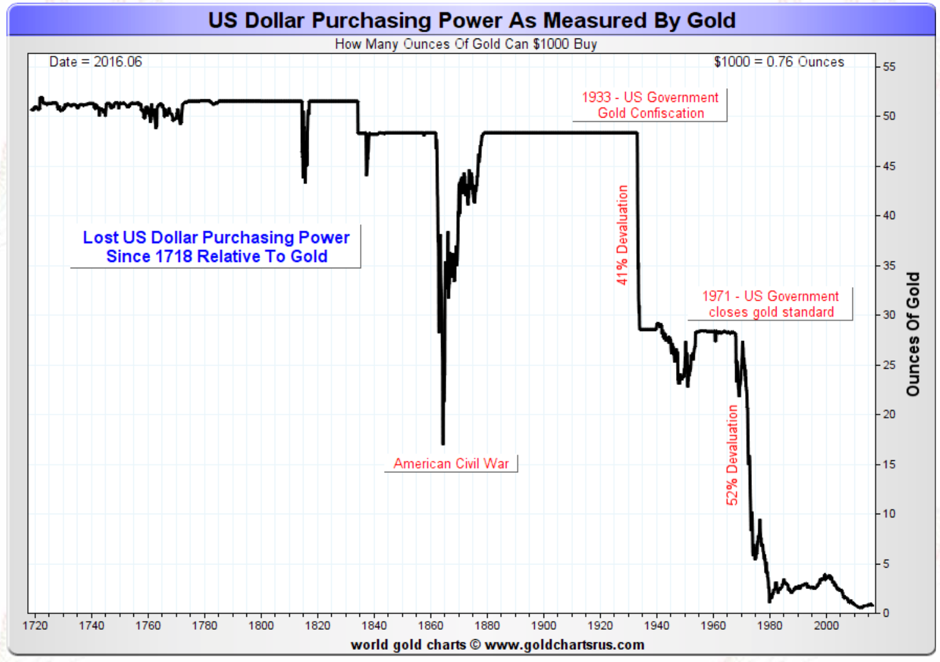 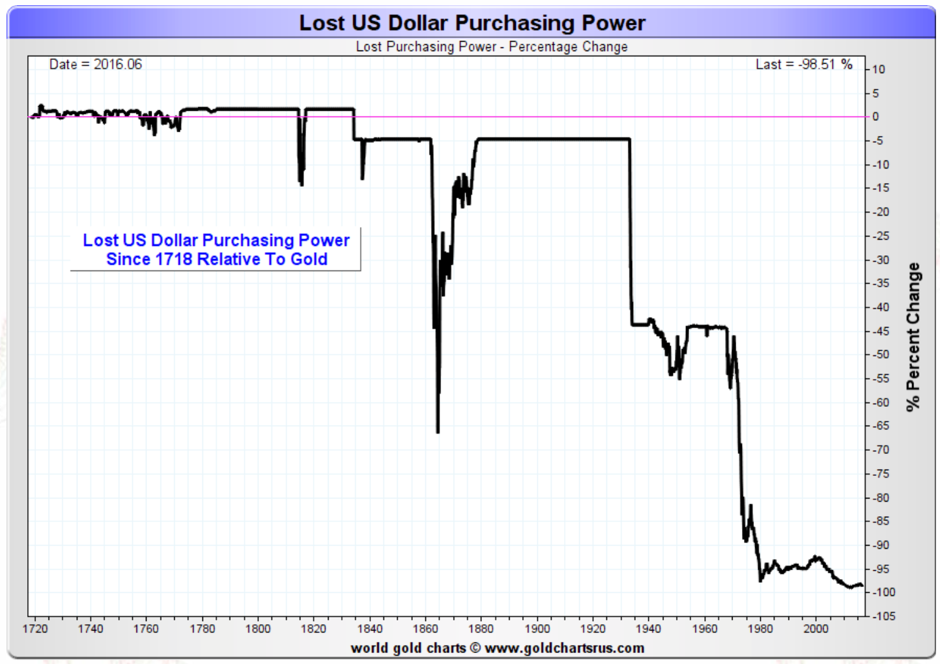 If we look at the SDR global currency, which is a basket/index of the major currencies, we see that since it was created, its value has followed that of the US dollar with respect to gold. The SDR was created in 1969 and the value of an SDR was defined as equivalent to 0.888671 gram of fine gold which, then, was also equivalent to 1 US dollar (1oz of gold = 35 SDRs = US$35). Today the SDR is valued based on four currencies (US dollar, EU euro, British pound and Japanese yen). Starting October 2016, the Chinese Yuan will be added to the basket/index. As you can see, it also lost most of its 1970 value with respect to gold. 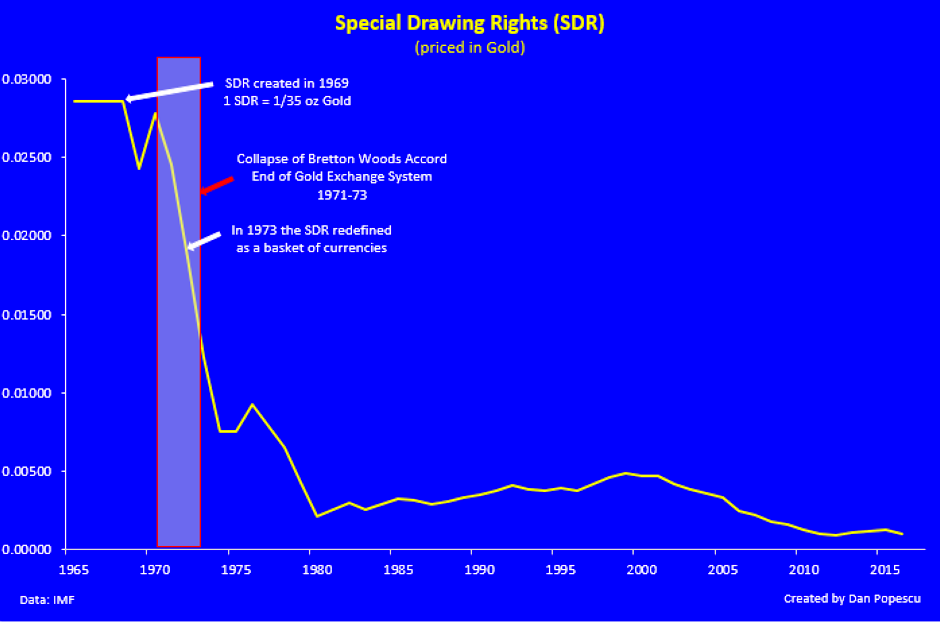 “In the absence of the gold standard, there is no way to protect savings from confiscation through inflation.” Alan Greenspan, Past Chairman of the Fed, 1966