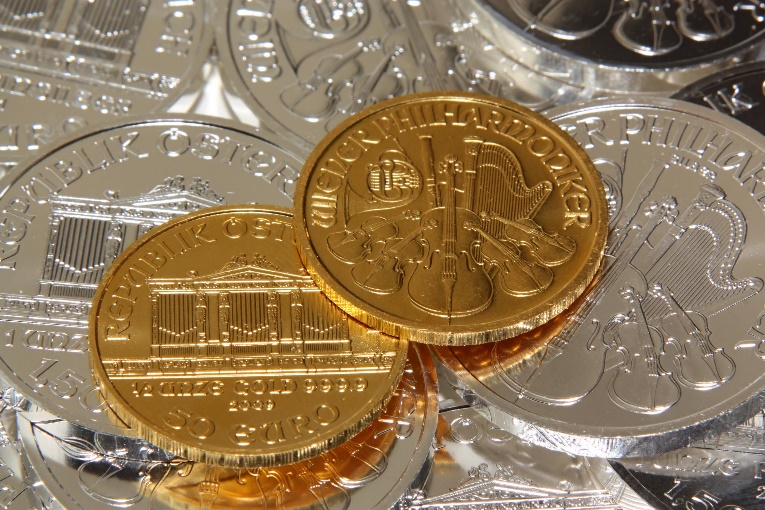 We can’t compare gold and silver without first looking at the chart below of above-ground stock of gold versus the visible gold market. Remember also that almost all of this gold above ground is in the purest form and ready at very low cost to come to market. This stock of gold is called reservation demand. Reservation demand is a demand that is expressed by holding onto something that you own. People who hold gold are demanding it by holding it off the market. Gold, unlike many other commodities, is not consumed, and therefore the traditional models and theories of supply and demand simply do not apply. Of all the gold extracted from the relatively small number of mines, only a tiny fraction is ever “consumed” in the true sense (about 9%), with the overwhelming production added to the ever growing stockpiles of governments, corporations and private investors, along with small amounts of recycled scrap. For gold there is always a large stockpile and it never gets any smaller, it is simply the owners of the stockpile who change. 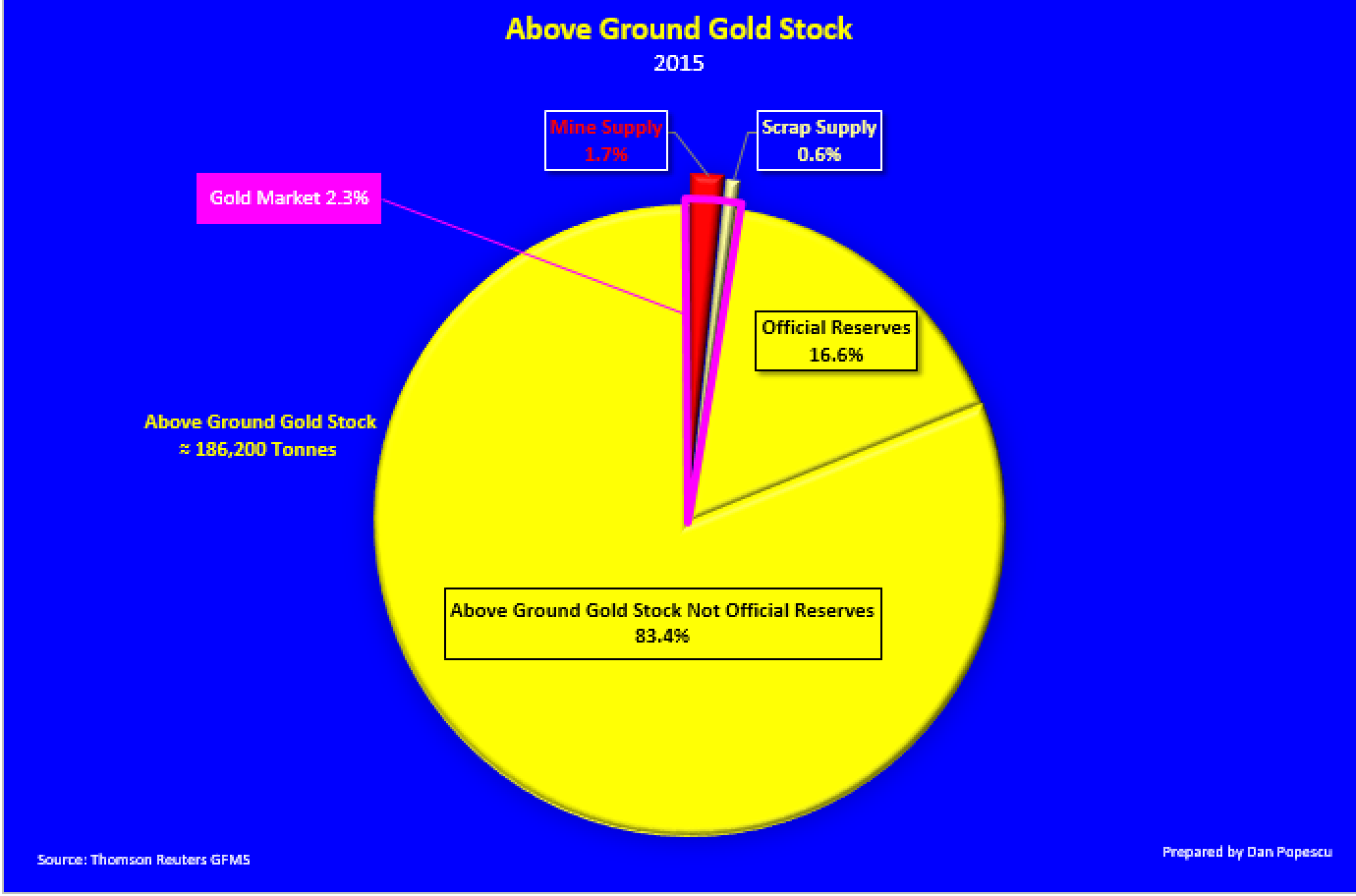 This is not the case for silver as you can see in the next chart, and even less for copper. You can see that silver also has a very high stock-to-flow, compared to other metals, but very far from that of gold. Still these three metals have a common monetary history that goes back a long way. How close is the price of silver related to gold? In other words, how big is the correlation between gold and silver? And should there be one? 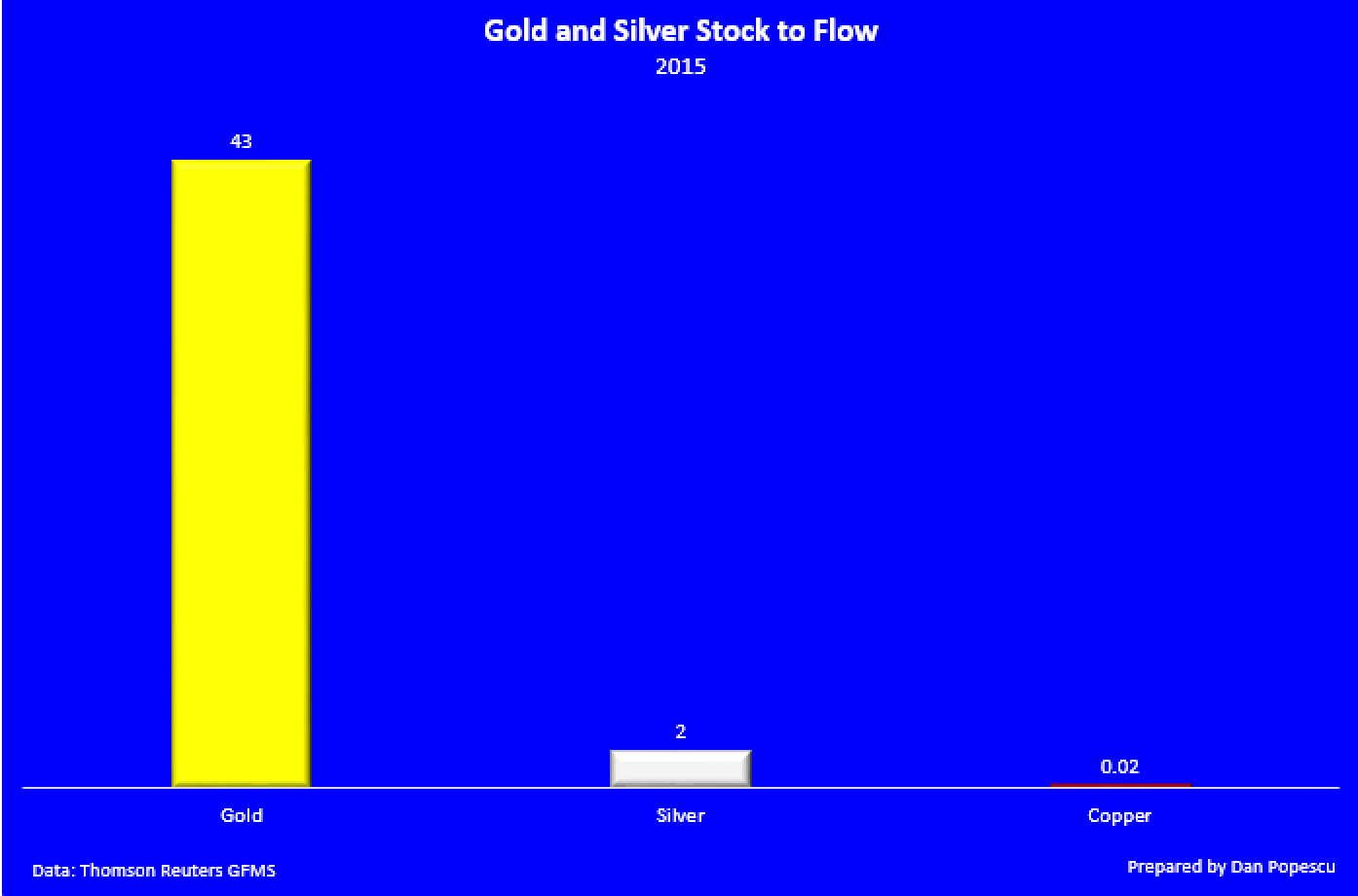 Even though silver was taken out of the official monetary system about 150 years ago and gold about 45 years ago, they remained in the international monetary system, if not in official form, at least as money in extremis and in the shadow of the fiat system. While there is no more silver in official international reserves, there is still a large quantity of gold left in official international reserves and, since the 2008 financial crisis, this amount has been increasing. The official sector still holds today in 2016 approximately 32,735 tonnes of gold but no more silver. However, gold and silver are still monetary metals, even if not “officially”. 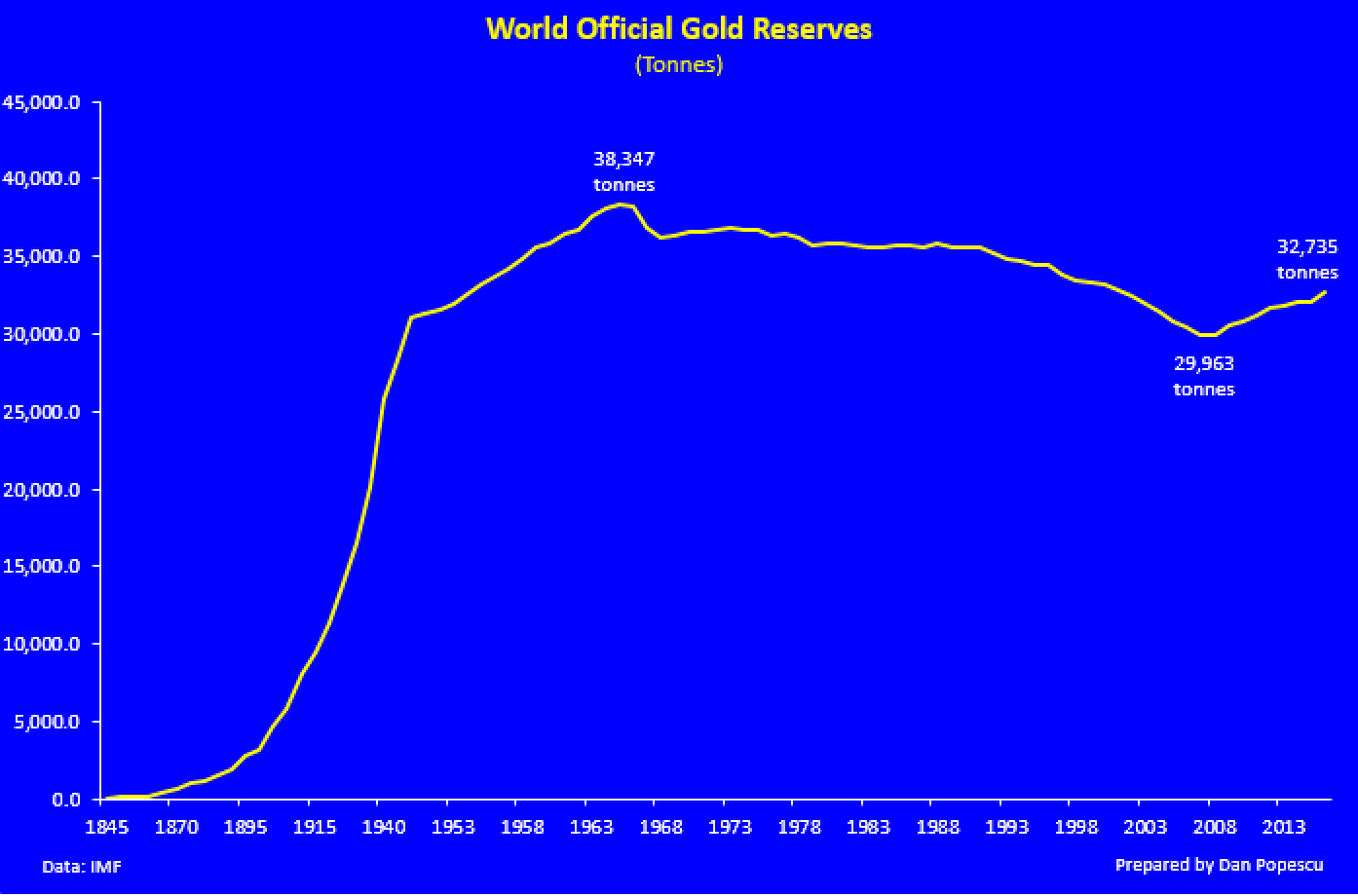 Prof. Antal Fekete says that, “in the case of monetary metals, in contrast with all other commodities, high and increasing prices may not bring out new supply. Rather, they might make supply shrink. Monetary metals are exempt from the law of supply and demand.” 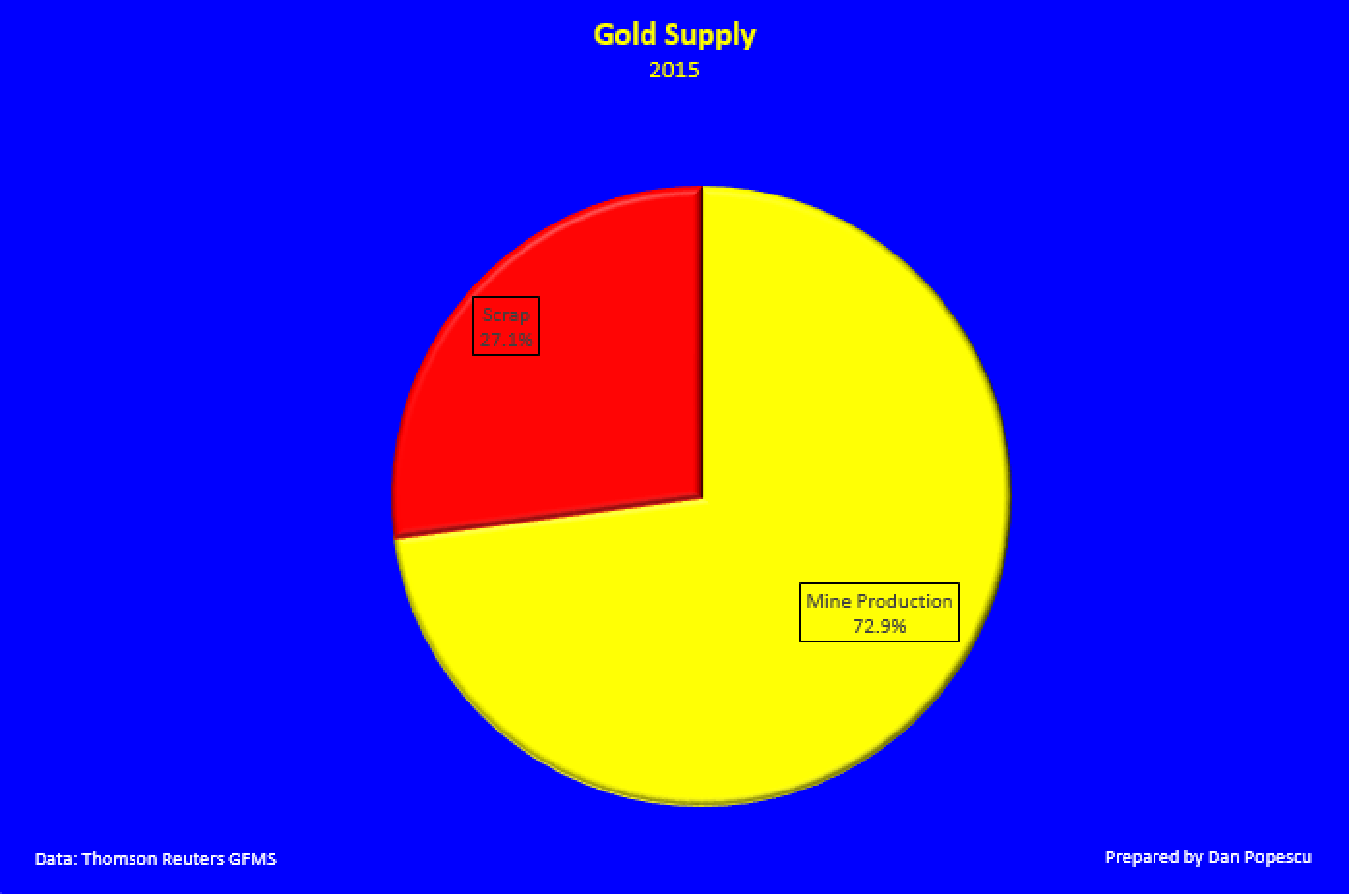 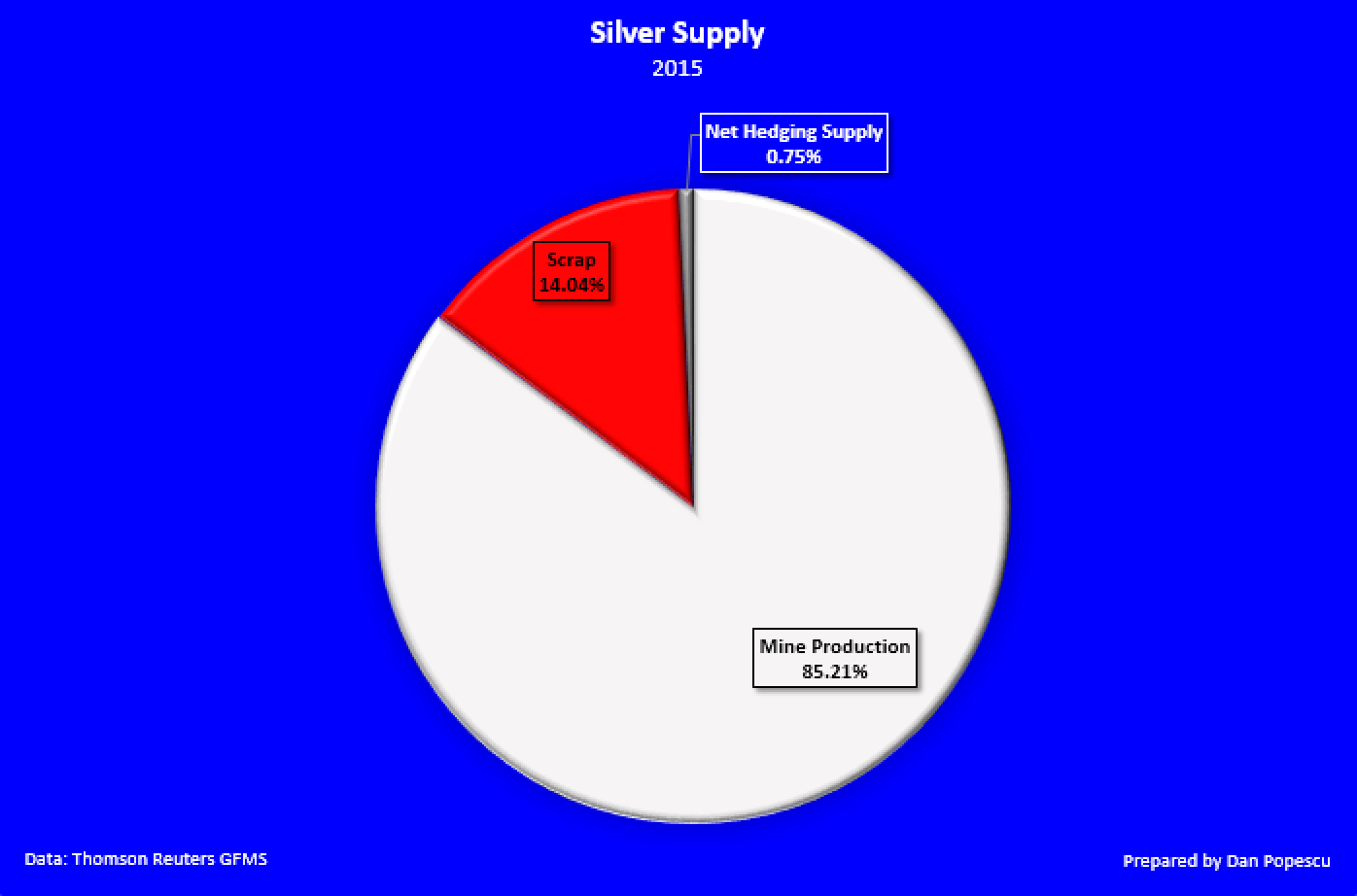 Gold and silver demand shows a much bigger and significant difference. I used different colors to highlight (red) the demand that is hard to recover and recycled demand that is not wasted and can be brought to market at low cost and quickly. As you can see in the charts below, industrial fabrication (hard to recover) of silver is almost 6 times larger than that of gold. Industrial demand for gold is 8.75% and for silver it is 50.3%. 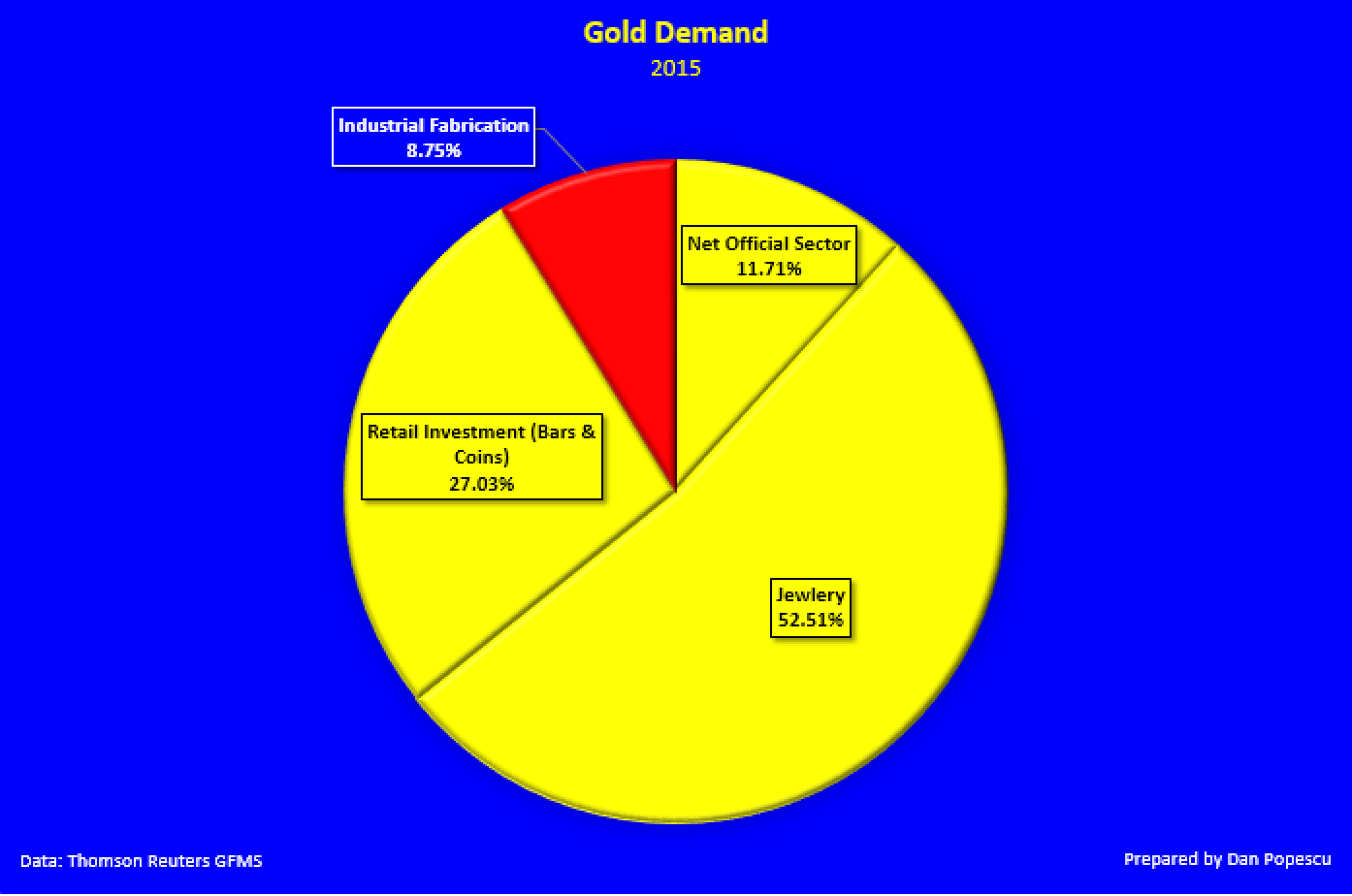 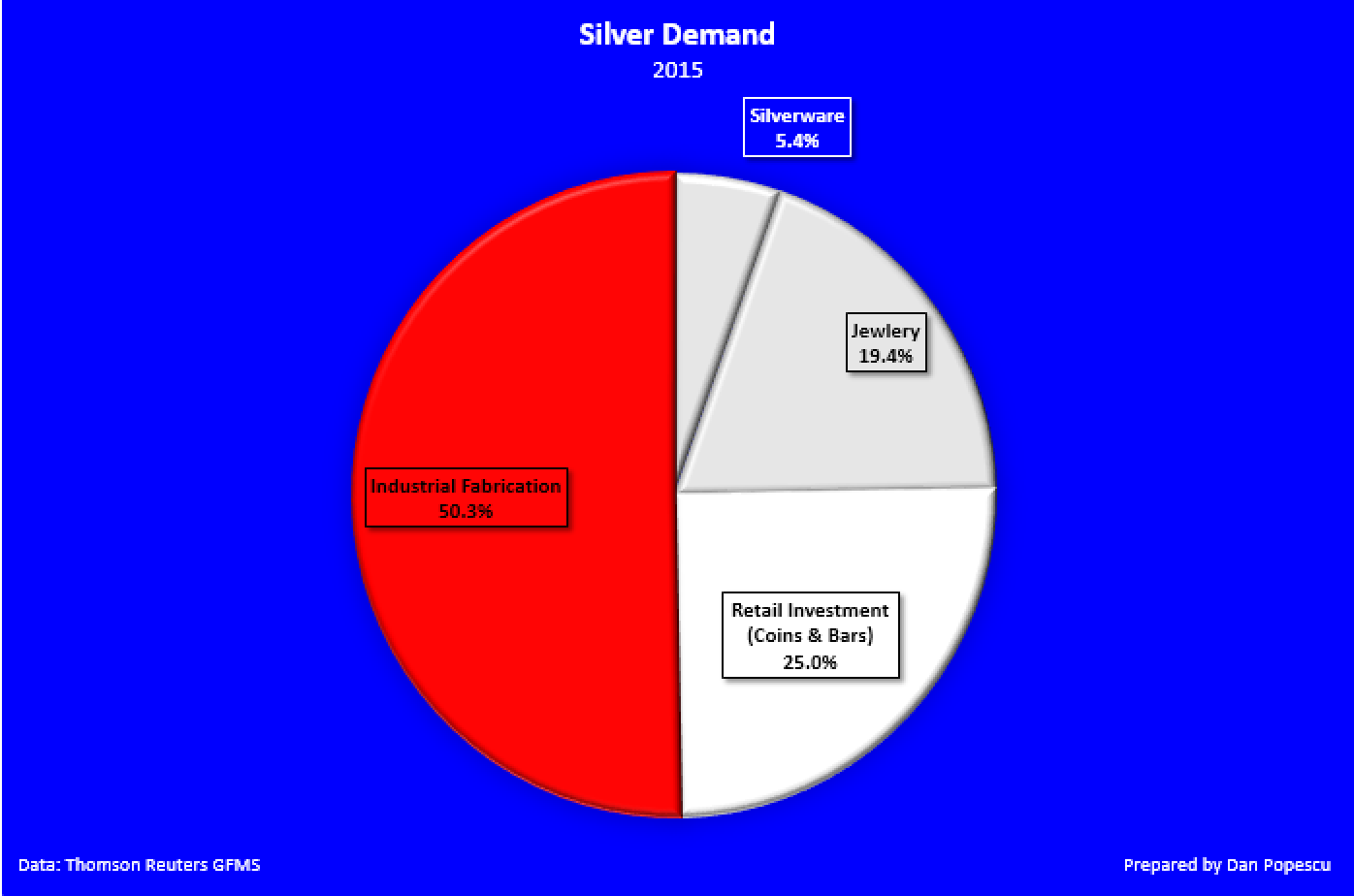 In regards to the relationship between gold and silver, we observe great variations in the silver/gold ratio. Even though there is 19 times more silver than there is gold in the Earth’s crust, only 9 times more silver than gold is extracted today. The historical 15:1 gold/silver price ratio is closer to their abundance ratio of 19/1. One must not forget, however, that the historical 15:1 ratio was almost always fixed or imposed by the State, never by the markets. The price ratio is presently around 65:1. Observe in the chart below the change in volatility of the ratio since the introduction of paper and electronic currency. From 3200 BC to 1860 AD the gold/silver ratio fluctuated between 2.5 and 17. That’s about 5000 years at an average of 10. It’s only after the introduction of paper money around 1900 that the ratio started showing extremely wide volatility and moved far away from its natural ratio of around 15, varying instead from 10 to 100. 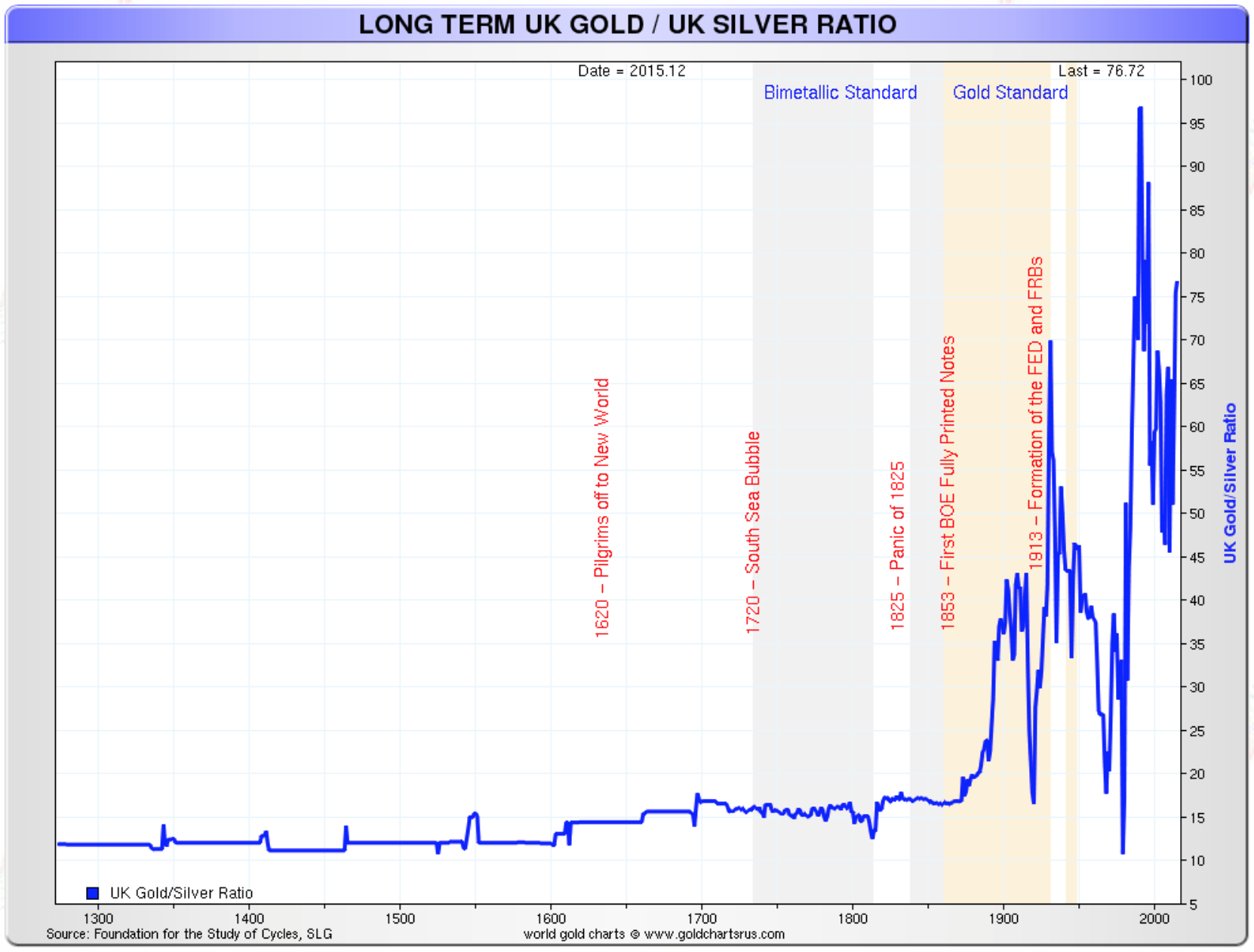 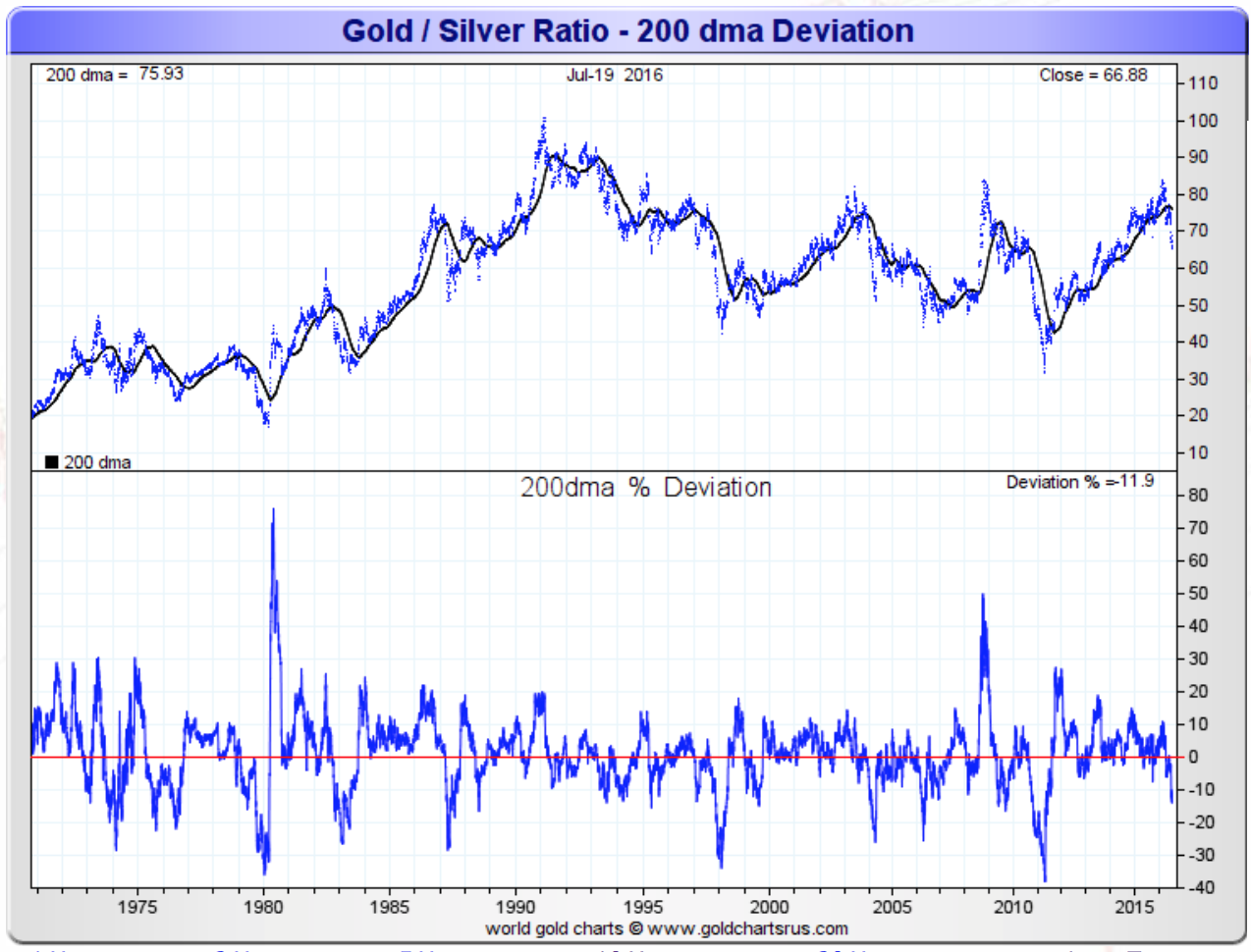 Although we have seen in the last one hundred years very large variations in the gold/silver ratio, the correlation between the two monetary metals has remained very high, and that even after we moved from a bi-metallic (gold and silver) monetary system to a mono-metallic (gold) one. In 1973, after the collapse of the gold exchange monetary system, gold also left the official monetary system, and we are now in a non-metallic monetary system. However, as I mentioned above, gold remained in the system as money in extremis in central bank reserves even after 1973. As you can see in the charts below, gold and silver have maintained a very high correlation moving, close to 100% during monetary crises like the ones in 1973 and 2008. Since 2012 it has been around 90%. 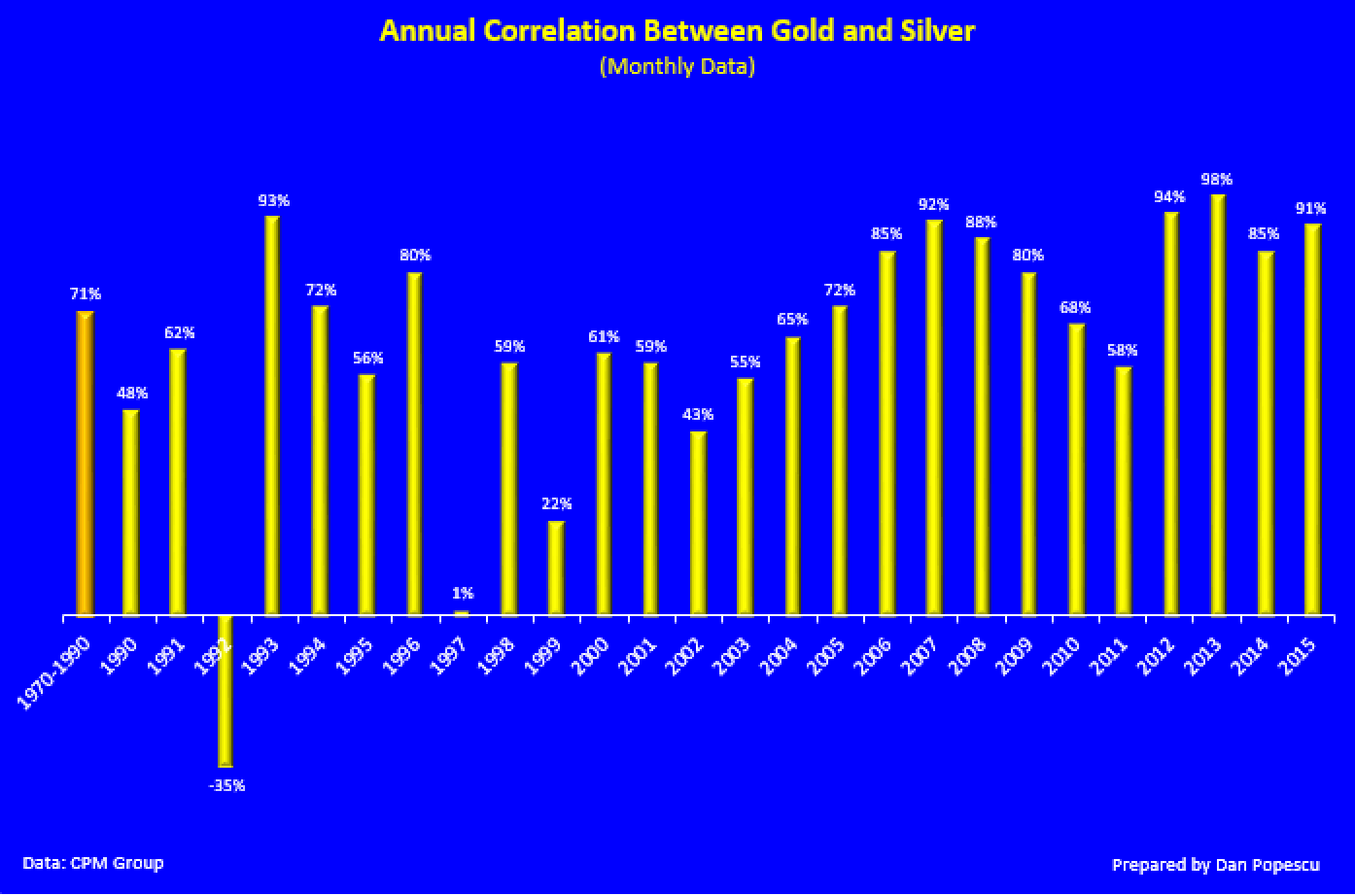 It remains that silver is much more volatile than gold. Roy Jastram called silver the “restless metal”. I think the much larger component of the industrial demand, as compared to gold, makes silver more volatile. Silver lost its official monetary role, but not its non-official one. In monetary crises, even after being demonetised, its monetary aspect dominated the industrial aspect, making it spike faster than gold. It became evident for me during the 2008 global financial crisis and also when India restricted the importation of gold. Silver’s monetary aspect is so deeply engrained in us that it became the obvious alternative to gold when gold was restricted or too expensive to acquire.

Others call silver the “poor man’s gold”. This pejorative name is not because it is less valuable, but because it always played as an alternative and a division to the more valued gold (around 15:1). For small transactions silver was preferred, and copper for even smaller ones. Silver circulated more than gold and copper more than silver. 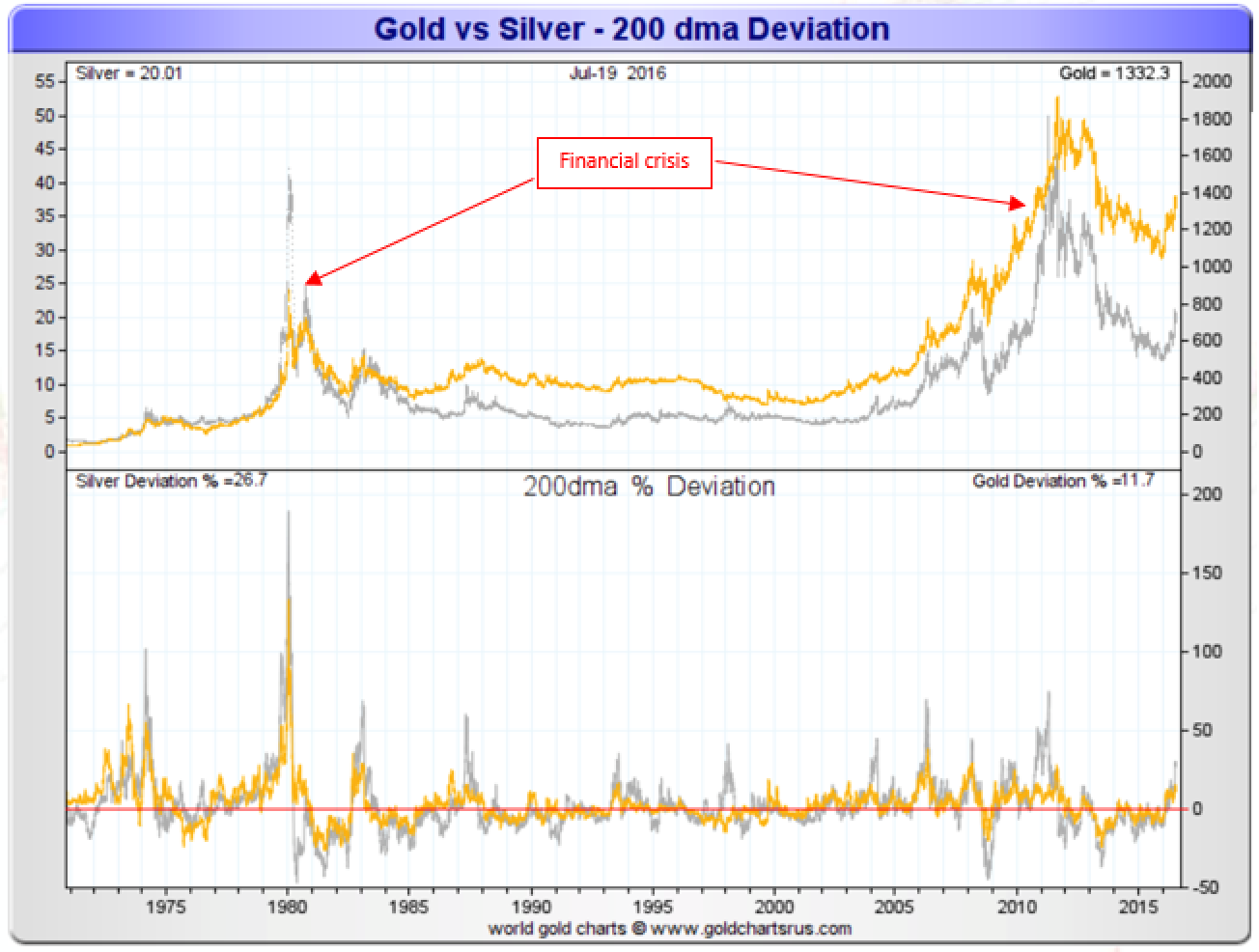 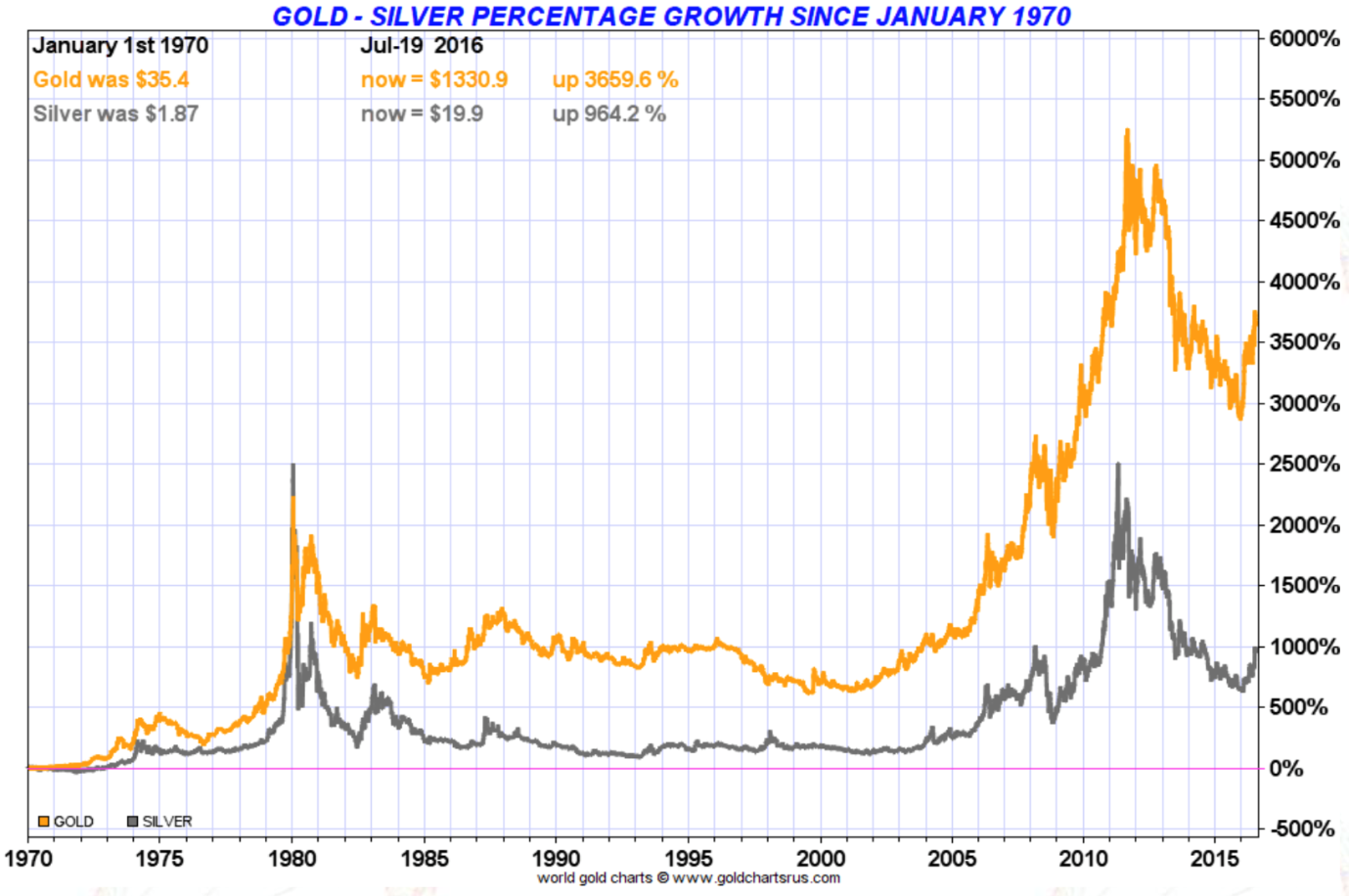 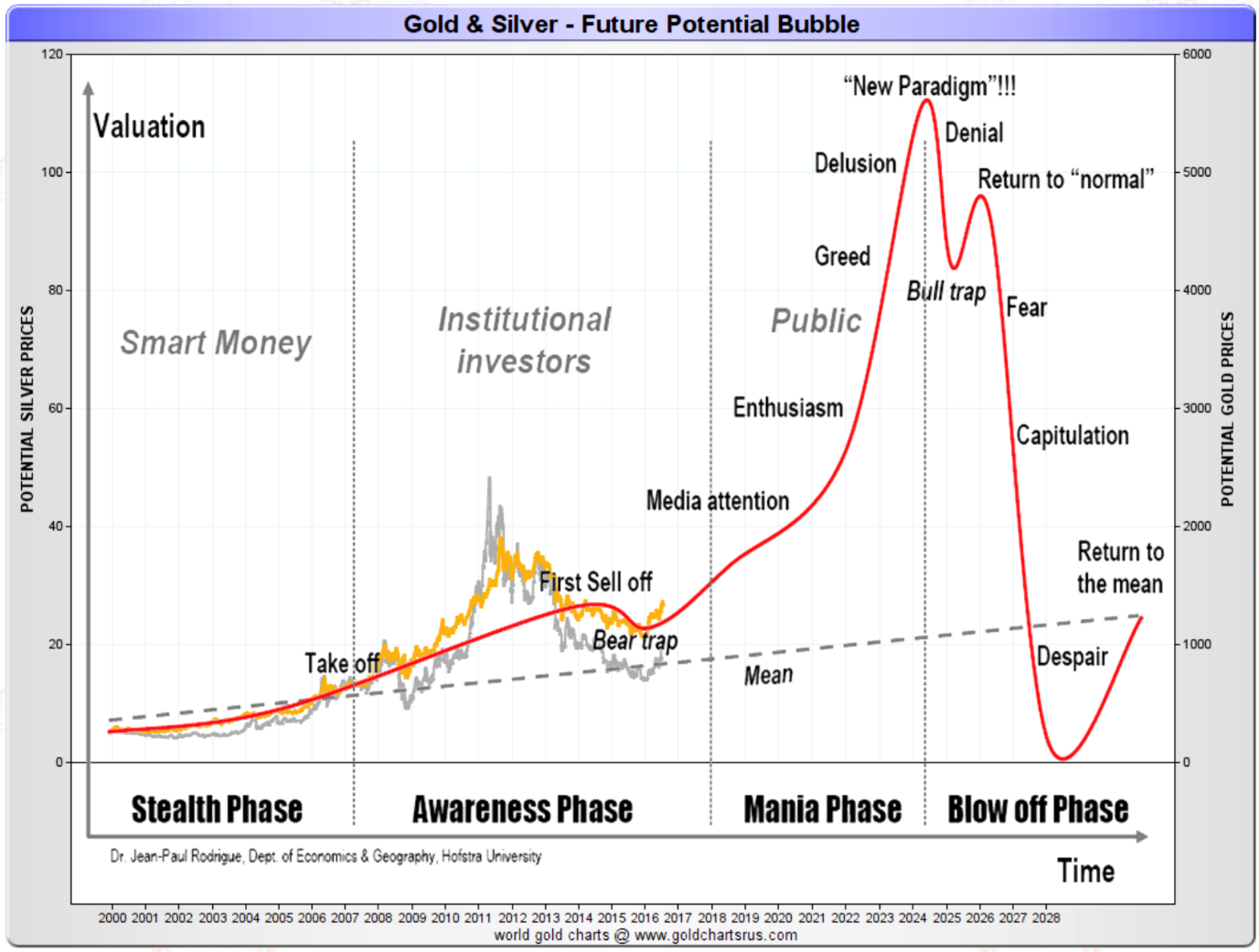 Sandeep Jaitly, of Fekete Research, in an excellent article on bi-metallism, The Validity of Bimetallism, argues that the problem of bi-metallism comes with the attempt to fix prices. He further states, “The problem was not with bi-metallism but with the mechanics of its establishment. Bi-metallism is like Paradise so long as exchanges between the metals are free, and mints are open to unlimited tender in both metals.” I agree, and we have also seen since the end of the gold exchange monetary system in 1973 that both gold and silver remained in the monetary system, albeit unofficially and in the shadow, ready to shine again when the fiat system would go into trouble and collapse.

I don’t think that silver, in this international monetary system collapse and reset, will lead gold but, on the contrary, it will wait for gold to signal the start of this new leg of the 2000 bull market that will bring gold around $5,000 and silver around $200. So I will not be surprised to see the gold/silver ratio reach 100 before decreasing to at least 40. As the price of silver increases due to the monetary demand, some of its industrial demand will drop; but I think the monetary demand will more than compensate the drop in industrial demand. 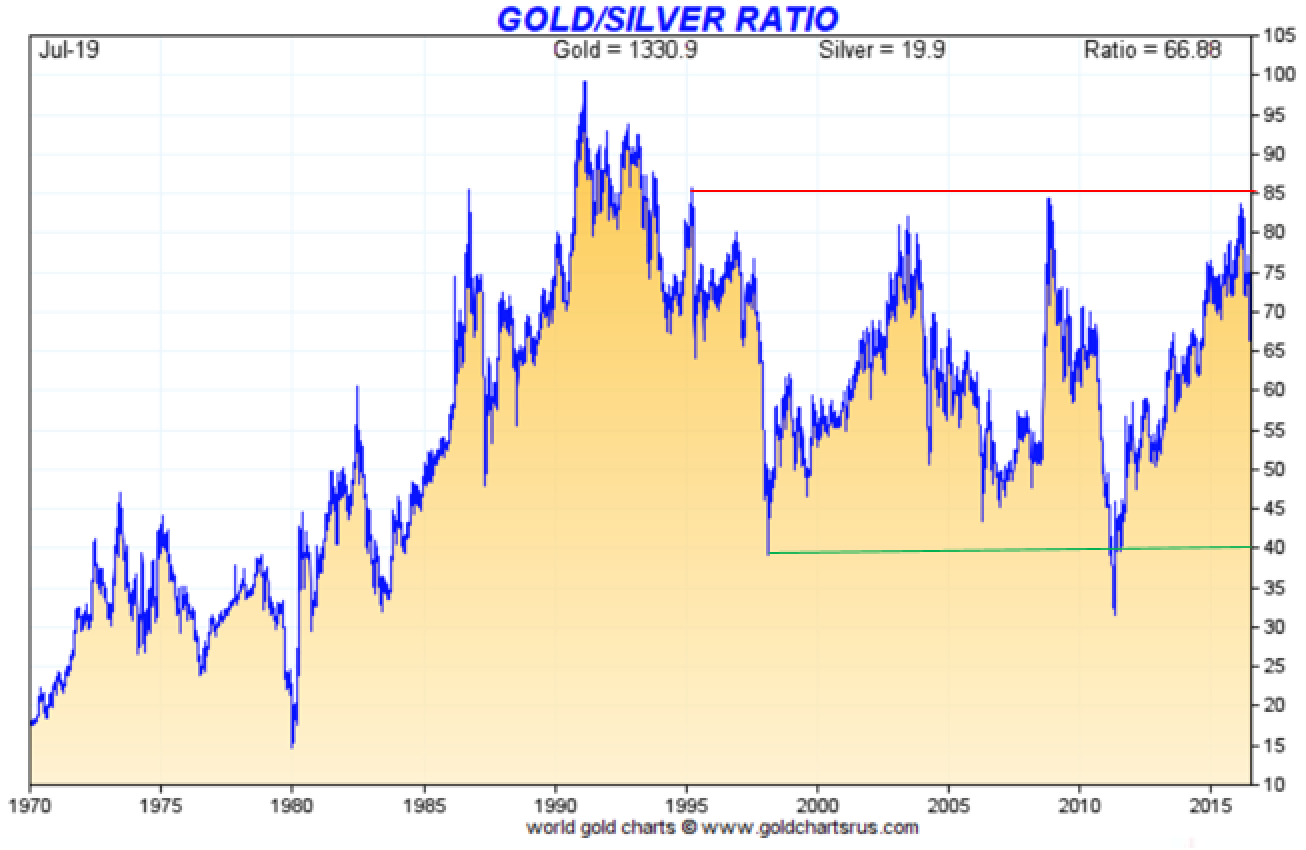 Do not dismiss history with such ridiculous statements as “relic of the past” or “useless metal”. Every scientific invention or innovation has as its inspiration observations and knowledge of the past. There is a good reason why gold and silver have survived as monetary metals while every fiat currency has passed away after a short passage. All fiat systems, even those that use mathematics, are easily abused by sovereigns. It’s not so easy to create gold and silver to infinity. What Aristotle said 2,500 years ago is still valid today: “In effect, there is nothing inherently wrong with fiat money, provided we get perfect authority and god-like intelligence for kings.“

“Gold and silver have been ordained not by corrupt governments and their hand-picked henchmen, but by millennia of human experience under divine guidance. They are the true monetary metals that have been handed down to us from Biblical times.” Antal Fekete