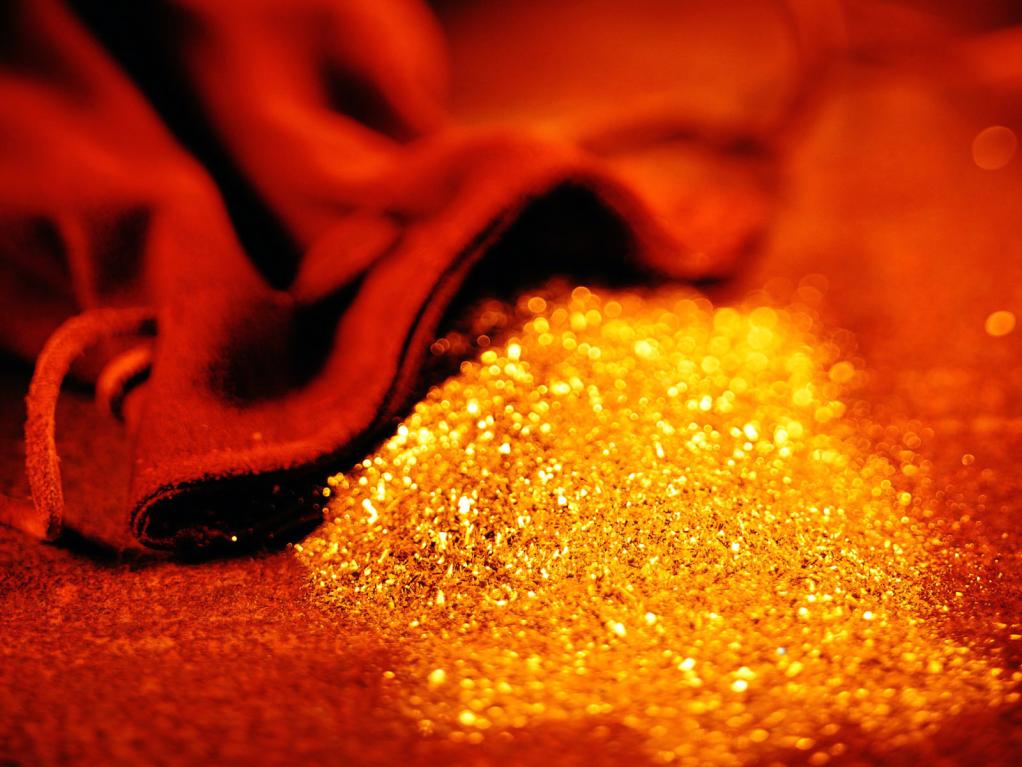 According to Mises, money’s function as a medium of exchange is thus the central one, while its store of value and unit of account functions are merely subordinate functions. I would say store of value and unit of account is what makes the medium of exchange marketable. The medium of exchange has to be simple to understand, not only by educated people but also the most uneducated. It has to be easily accessed, not only in ideal circumstances but also in difficult ones. Many things have been tried and have worked in specific regions, for short periods of time, and only in ideal circumstances. Jim Grant says, “Gold is instantly and optically recognizable as money. You don’t have to explain it.” It is the simple nature, divisibility and durability of gold that has made it become universal money. Gold became money because of its physical characteristics (scarcity but still in sufficient quantity, malleability, inertness, durability and uniformity). Many crypto-currency supporters point to the scarcity of gold and also, based on some mathematics, to the scarcity of crypto-currencies, but gold is not scarce. If it were it wouldn’t have become money. Besides, there are many other metals much more scarce than gold.

Someone recently told me that “gold isn't adaptable” and that “gold also can't be upgraded” like Bitcoin. If Bitcoin is adaptable then how would you "adapt" Bitcoin to a no-electricity environment? “Well without electricity all the gold on Earth won't save you mate,” I was told. What arrogance and dismissal of nature and the real world! I love electricity and it has been, along with light, the passion of my life since childhood, and I studied it at university while doing a physics degree, but to say that without electricity there is no world is just incredible. At least half of the world population still has no electricity or only has it sporadically. We live in Europe and North America, especially in major cities, in an ideal environment where power failures are rare, because we have been privileged in the last 70 years. Others who went through hyperinflations, wars, revolutions, civil wars or natural disasters understand much better that we live in a real world first, not in a virtual one.

I had the misfortune, which was also a rude awakening for me, to go through a major power failure in Québec, Canada, in 1989. A severe geomagnetic storm struck Earth on March 13, 1989. It occurred during solar cycle 22 and caused a nine-hour outage of Hydro-Québec's electricity transmission system. However, many regions of Québec had no power for several days – even weeks, in the suburbs – including  Montréal, one of the largest cities in North America. I was living downtown and in the most strategic part of the city where all the major banks and private and government institutions are located, and no bank opened for a week for lack of electricity. The point is that electronic- based crypto-currencies are dependent not just on electricity but a constant and continuous one. And I am not mentioning here the capacity of governments to disrupt the virtual network. They don’t need to ly control it but just disrupt it in a significant way. Crypto-currencies are fiat currencies and, therefore, have the same major flaws as paper currencies.

Gold through thousands of years of testing has become the standard. It is the standard against which every currency is tested and compared; even crypto-currencies can’t stop being compared to gold. Big efforts have been made to push gold out as a “tradition” and “relic of the past”, but they failed. When trust disappears gold always comes back in the limelight. This is the case in financial crises, revolutions, civil wars, wars and natural disasters. In these circumstances trust disappears at the speed of light. We have seen it during the recent financial crisis in 2008. All of a sudden gold has reentered the financial system after being considered dead. Some sage investment analyst who lived long enough to see a major war and a depression cautioned us at the top of the 2000 euphoria. Close to the end of his life, in the last chapter of a negative book on gold as money, The Power of Gold, Peter Bernstein writes, “Gold may again serve as the ultimate hedge in chaotic conditions.Its return to its traditional role as universal money is unlikely, however, unless the time should come when the dollar, the euro, and the yen have all failed to function as acceptable means of payment across international borders.” What foresight he had. He passed away in 2009 just when a major financial crisis started, and gold returned into the financial system as he predicted.

Roy W. Jastram, in his book The Golden Constant, shows the power of gold to remain constant through time. Jastram himself remarked that, “in spite of the methodology of the analysis, there is no intent to define 'constant' in the scientific sense of a mathematical parameter. The concept is at once too universal and too elusive for that”. It is interesting to see in Jastram’s chart below the large volatility that fiat has introduced, even in real prices. 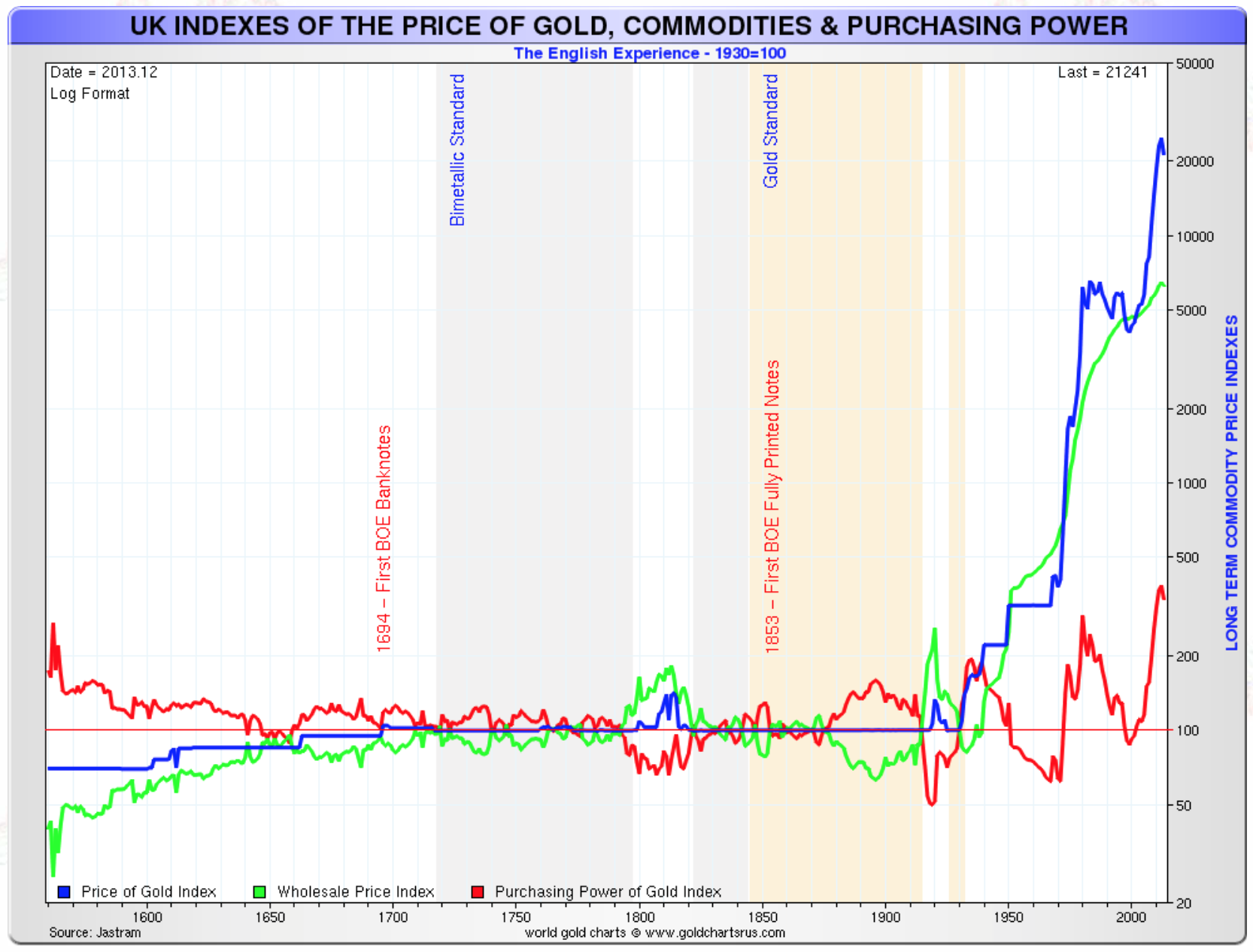 Jastram also says that, “Gold maintains its purchasing power over long periods of time, and all across the world. The amazing aspect of this conclusion is that this is not because gold eventually moves toward commodity prices but because commodity prices return to gold.” So are fiat currencies that are fluctuating, mostly devaluing towards zero, not gold. Jim Rickards says in his latest book, The New Case for Gold, “to think of gold as a constant unit of measurement, what economists and mathematicians call a numéraire or counting device”.

An interesting chart by Nick Laird (Sharelynx.com), shows that the price of gold increased even though the quantity of gold has increased since 1800. With such an increase in supply you would have expected a decrease in price, not an increase, according to the theory of supply and demand. 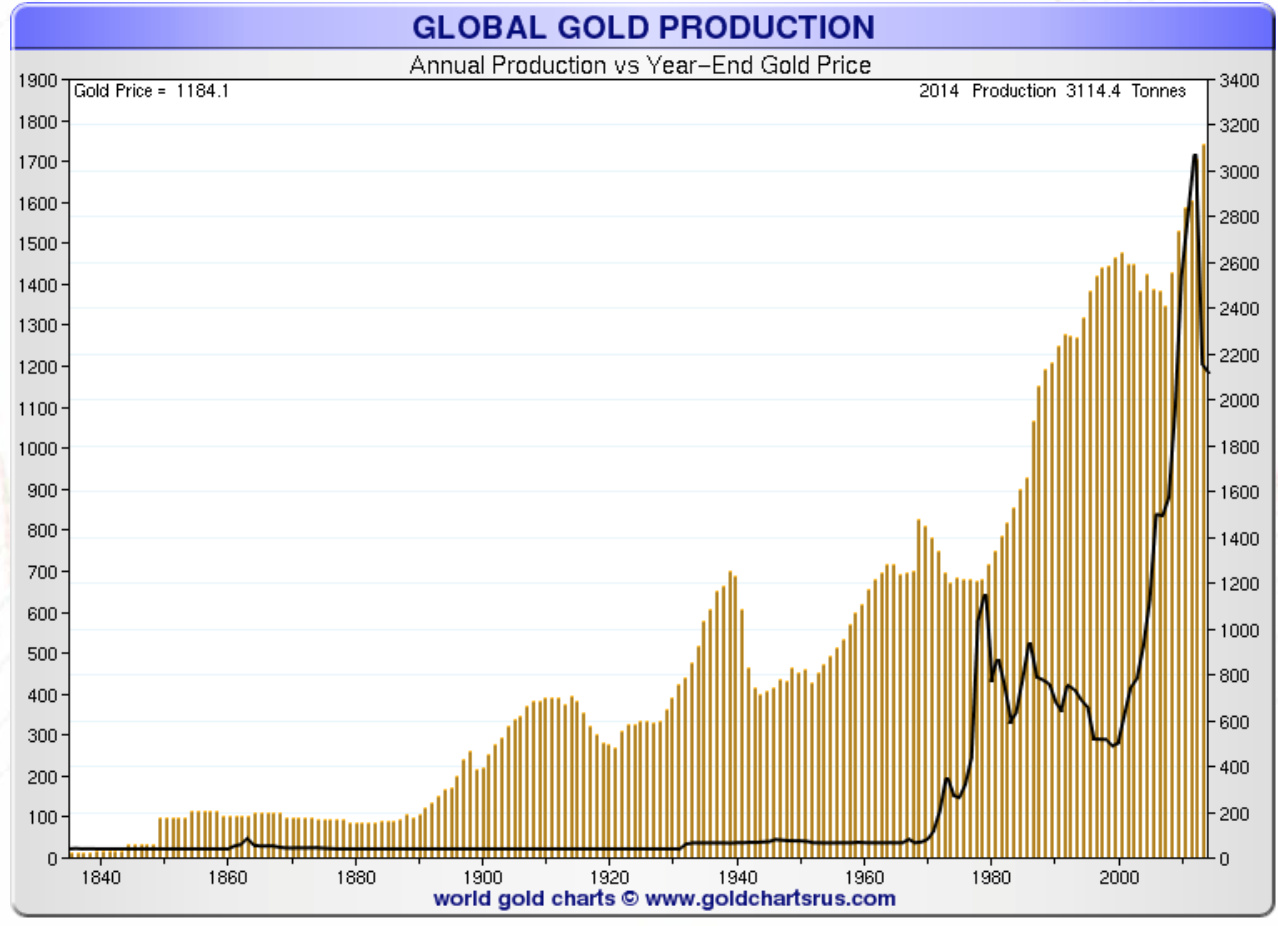 The next three charts show that rather than being scarce, the quantity of gold has increased, but at the same rate as the world population, offering a sufficient supply of gold to be used in transactions as population increased. The above-ground stock of gold increased by 1.88% since 1900, the gold mine production increased by 2.31% since 1900, and 1.19 ounces of gold per capita were mined since 1500. 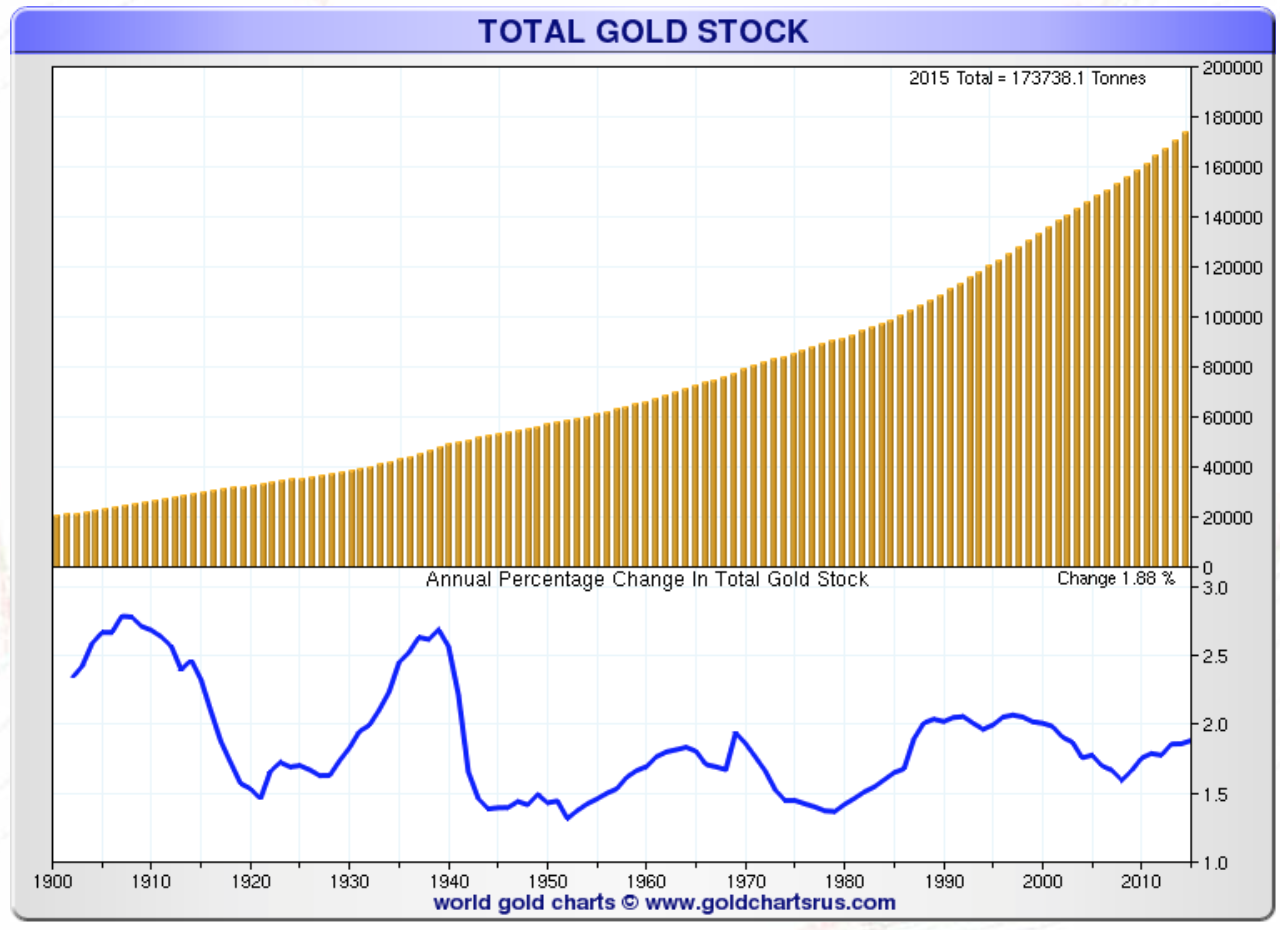 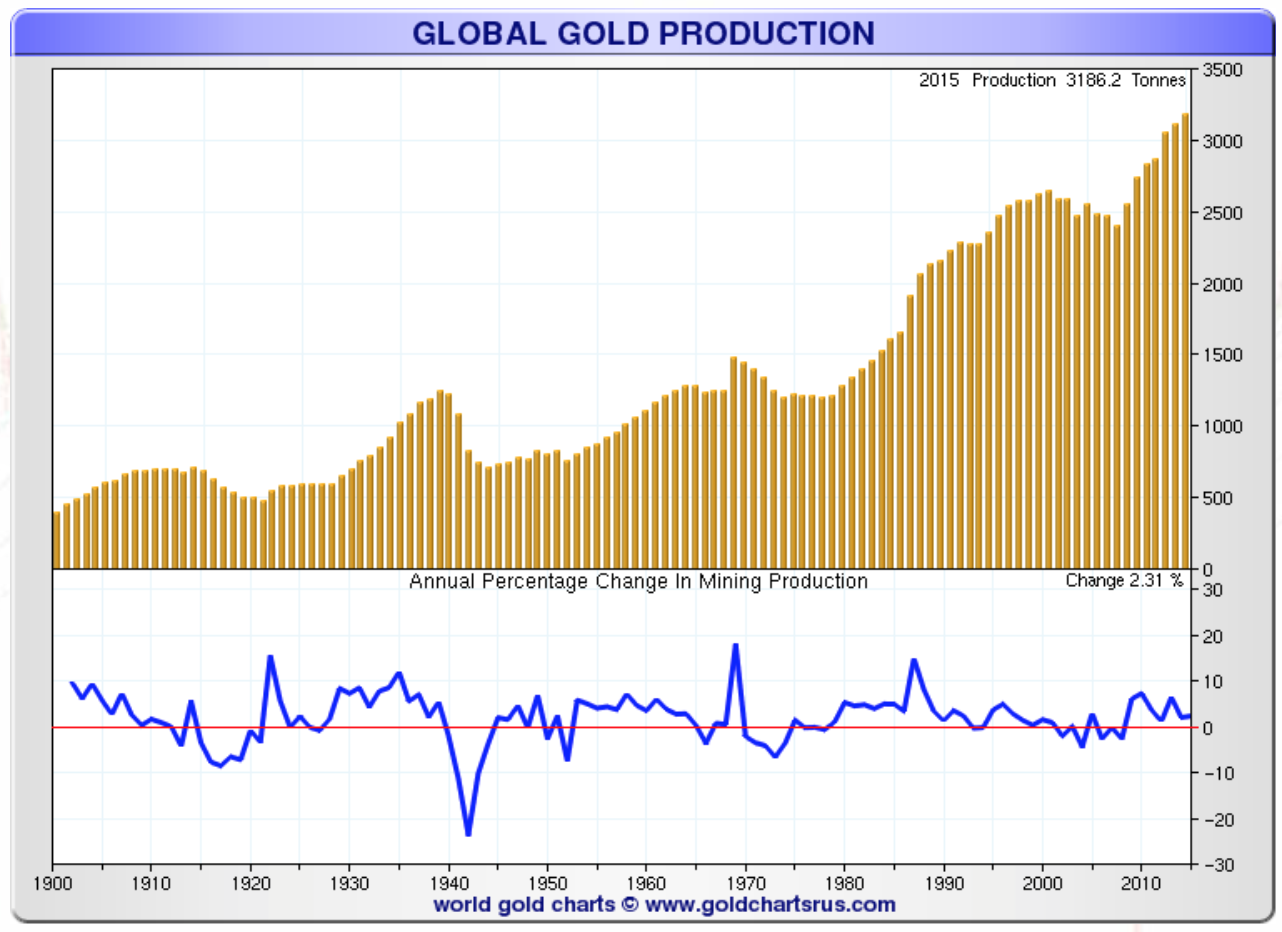 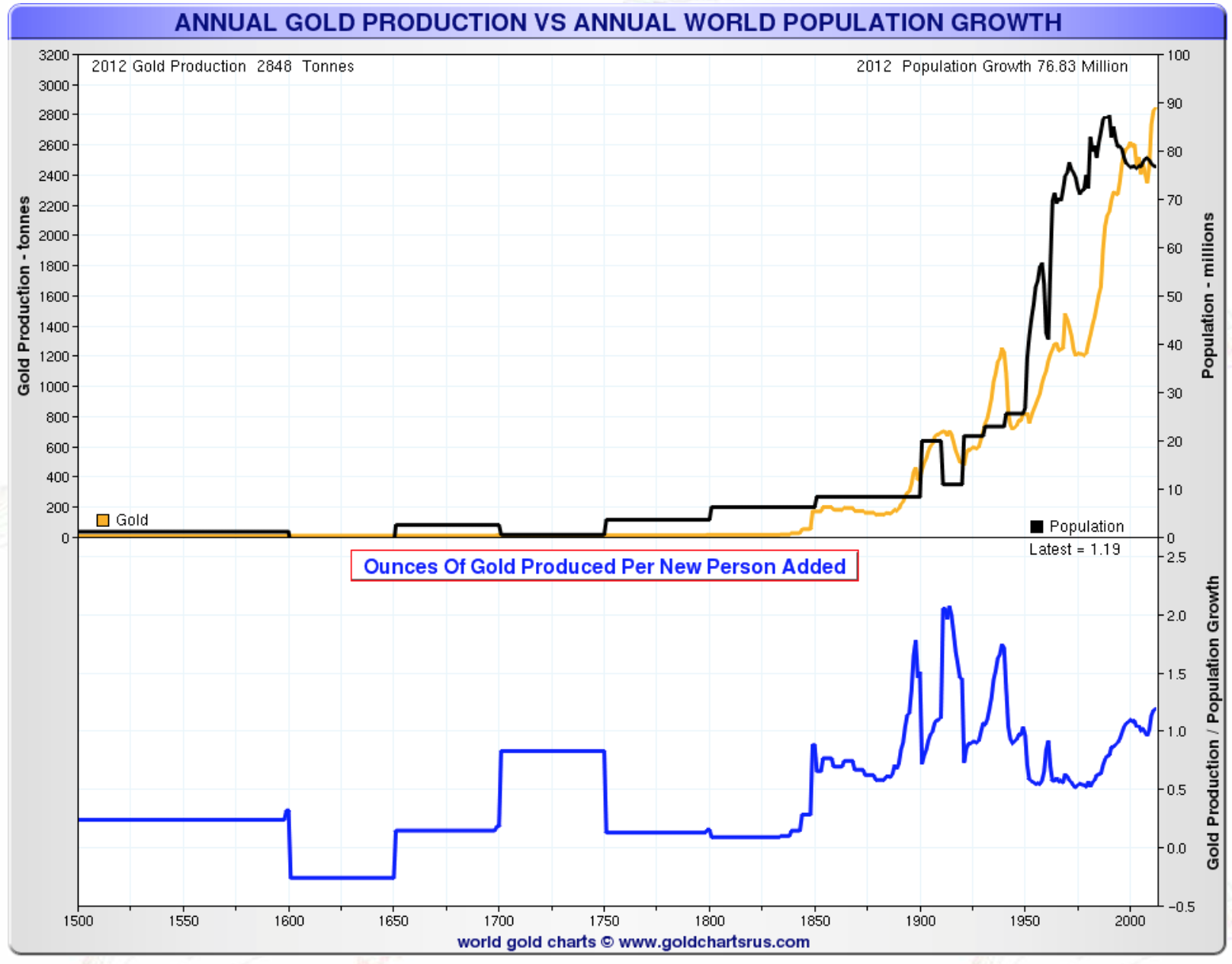 Robert Mundell, Nobel Prize of economics, said, “Gold has fulfilled the role of a de facto universal money, a standard of value, the link between the past and the future and the cement linking remote parts of the human race to one another.” Alan Greenspan, former chairman of the Fed, said, “Gold still represents the ultimate form of payment in the world. Fiat money, in extremis, is accepted by nobody. Gold is always accepted.”

The president of France, General Charles de Gaulle, said it best in 1965 and is still valid today, “The time has come to establish the international monetary system on an unquestionable basis that does not bear the stamp of any country in particular. On what basis? Truly, it is hard to imagine that it could be any other standard than gold. Yes, gold whose nature does not alter, which may be formed equally into lingots, bars or coins; which has no nationality and which has, eternally and universally, been regarded as the inalterable currency par excellence.”

Aristotle, 2350 years ago, speaking of fiat said “In effect there is nothing inherently wrong with fiat money, provided we get perfect authority and god-like intelligence for kings” and Voltaire said that, “Paper [fiat] money eventually returns to its intrinsic value – zero.” This is also valid for electronic fiat currency. Gold has been the standard by which value has been measured for 6000 years, and still is, even when not officially recognised.

Jim Rickards in his latest book, The New Case for Gold, says that we have been in a “shadow gold standard” since the collapse of the gold exchange system in 1971, and Prof. Fekete in his book, Le Retour au standard or (Return to the Gold Standard), says, “Gold that circulates inspires confidence; gold held in a safe indicates a lack of confidence”. In 2008 gold reappeared from the shadow and, as the social, political and economic system collapses and resets it will remain in the sunshine. It will be accumulated until the reset and then it will return in circulation again. 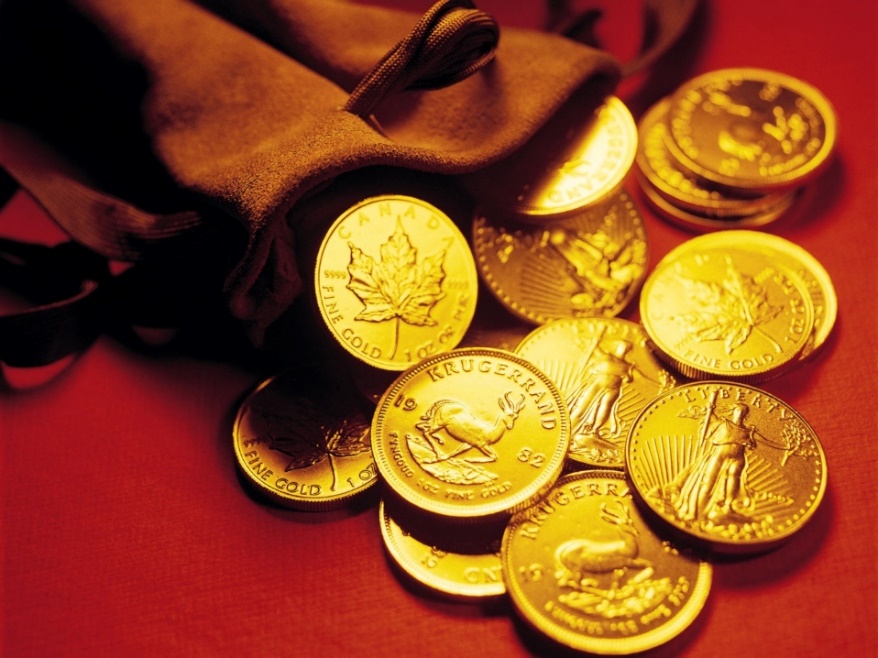