As expected, immediately following its Wednesday speech, the Fed went on with its market regulating policy in order to send positive signals to the markets and to maintain the trust of investors.

Thus paper gold was sold without end, combined with the now traditional suspicious moves occurring outside of the COMEX, in order to be able to break support levels more easily. Silver, though already quite oversold, but easier to manipulate, was hit by a powerful smash-down on Friday that broke its major support at $18. Usually, those violent attacks can last up to two or three days, so it is still possible to witness more hits.

Sadly, for the “market regulators”, gold could not be brought down near its $1,180 support... if it had been, we’d have witnessed the same avalanche of paper gold on the COMEX to break it! The gold miners, for their part, did not manage to stay above their lateral support that was defining a bullish trend since December 2013. In short, the entire sector has been sold at a time when all economic indicators are down and that no one knows when interest rates will rise.

From a trading point of view, we see two red flags (silver support/miners support) and, until the technical situation gets better, we should remain cautious with our trading positions. But this doesn’t change anything at all for our long term positions in this market which must ALWAYS be held as fire insurance in case of a crash or a market closure.

Clearly, since 2013, we have entered a period where stupidity is rewarded. It has paid off astoundingly well, for more than a year now, to follow the mainstream consensus and the bankers’ recommendations (bullish on stocks and bearish on gold), when normally what looks obvious to the majority is already priced in and the market is begging to turn. Either we are getting very close to the last breath to inflate the bubble, or it keeps inflating beyond 2014 to the point of bringing the whole financial system to a devastating explosion!

What are the downside risks for precious metals if gold’s major support at $1,180 is hit by a flash crash? Many see $1,000 as the next support and, technically, it is the most obvious support. But I don’t think it’s possible to press gold down to that point. We could see a marginal breakout to the downside, maybe to $1,100. In fact, the $1,200 support has been attacked twice already without success and has produced consequential rebounds in the price. Every time this support is attacked gold becomes in backwardation and the commercials become again aggressive buyers on the COMEX. Therefore, it’s pretty safe to say that this $1,200-$1,180 support will hold! 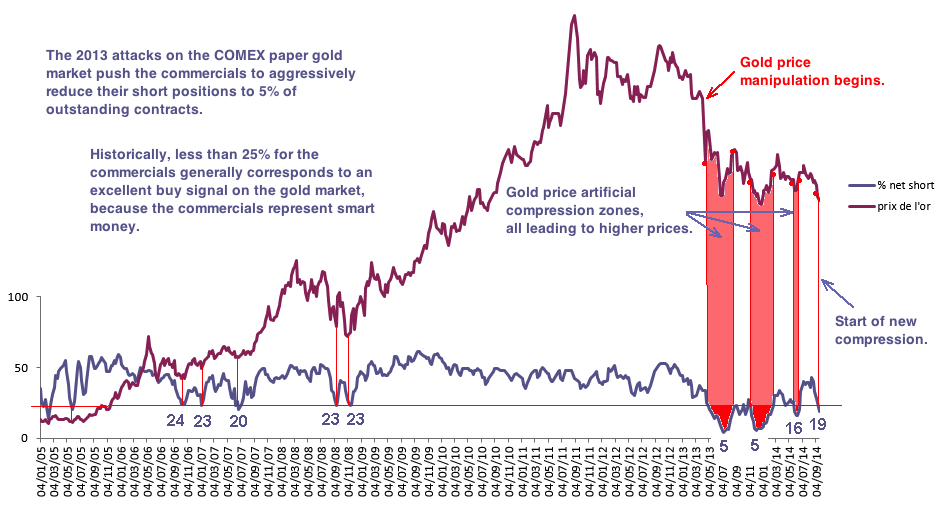 This graph is very enlightening because we can see the actual net short commercials position in relation to the number of outstanding contracts on the COMEX. During the 2013 April and June attacks, the commercials went aggressively to 5% net short! A record! Actually, we’re getting a buy signal, and it should be even lower next Friday (there is a three-day delay in the data each Friday).

We can observe that every time the commercials get under 25% net short, this corresponds to an artificial price compression zone. This operation always fails at the end, but, for now, it gives the bankers enough time to keep a lid on the gold price during the delicate QE 3 tapering.

Each compression produced a rebound of $110, $100 and $60 higher than when it started. The longer the compression, the more violent will be the breakout out of the hole. This has to be kept in mind. If the manipulators succeed in breaking this $1,180 support in the coming weeks it will mean that the worst compression will only have produced a 10% cut on the price. This would bring us back, at worst, around $1,110-$1,120, but it would make gold shoot back up to $1,350 very soon afterwards (start of compression zone September 9 at $1,250 + breakout $100 higher = $1,350).

However, I tend to think that the more price manipulation lasts, bringing possible total physical shortage, the harder it will be to push gold down under $1,180. And, moreover, this price would be clearly under the miners’ cost of production!