Gold Rebounds After Fainting Due to Inflation Spike

Gold recovered after a downward response to the surge in inflation. What’s next for the yellow metal?

Gold rebounded after an initially bearish reaction to the BLS report showing that inflation soared 4.2% in April year-to-year. This means we have an inflation annual rate doubling the Fed’s target and the highest since the Great Recession as the chart below shows. 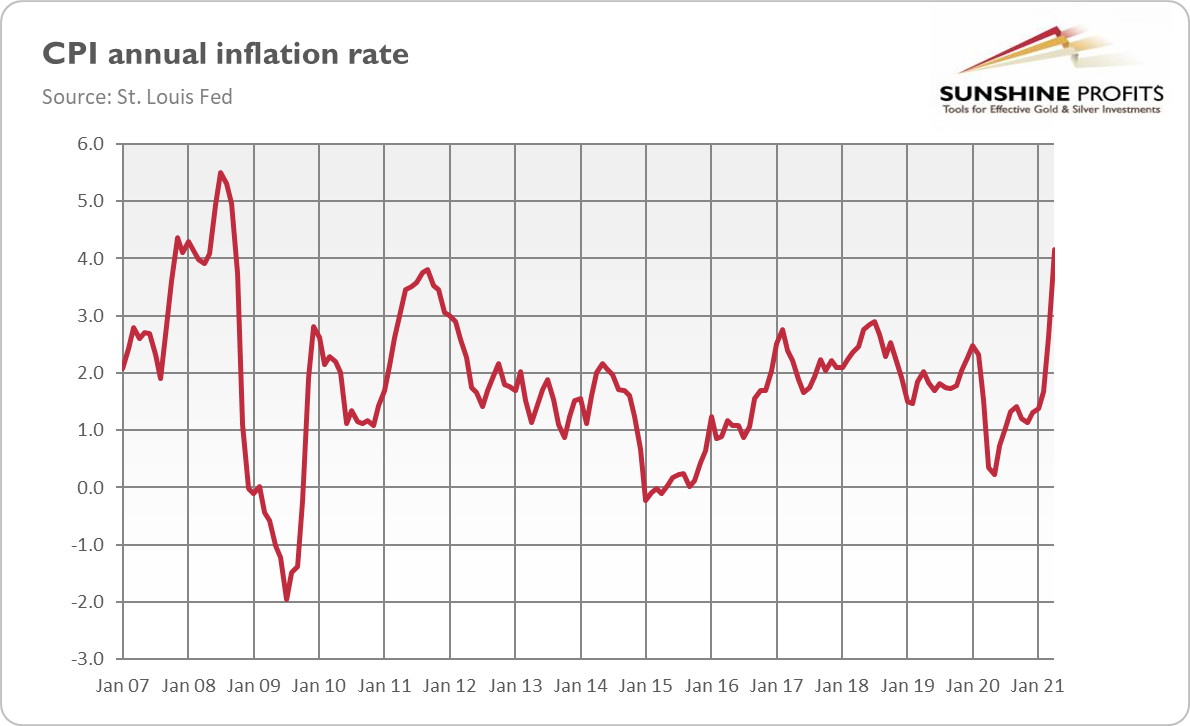 It might now seem counterintuitive, but traders worried that the jump in the CPI would force the Fed to tighten its monetary policy earlier than anticipated. However, it seems that the US central bank managed to convince the markets that it would remain dovish for a very long period and that April’s inflation reading wouldn’t accelerate the first hike of the federal funds rate.

Indeed, on Thursday, Federal Reserve Governor Christopher Waller said that the Fed would need “several more months of data” before considering modifications to its stance. He added “now is the time we need to be patient, steely-eyed central bankers, and not be head-faked by temporary data surprises.” So, don’t fight the Fed, interest rates will stay at zero for several months, thus supporting the yellow metal!

After all, the Fed’s narrative is that the current inflation is transitory. Of course, the April surge was partially caused by a 10% increase in the cost of new, as well as used cars and trucks – this accounted for a great part of the overall rise. Interestingly enough, the massive spike in car prices was in part generated by temporary supply-chain disruptions, i.e., the shortage of microchips used in automobile production.

So, although May’s inflation reading will likely be smaller, inflation may be more lasting than many analysts believe. There are many arguments for this. First, the surge in the broad money supply. Second, rising producer prices in China, so there might be an import of inflation. Third, the realization of the pent-up demand. Fourth, the rising input prices and more room for passing them on consumers. Fifth, April’s sluggish job creation signals that wages will have to rise to entice people to return to work (all the recent unemployment benefits have made current wages less appealing). So, producers could try to pass these increases in wages on consumers, just as with rising input prices.

What does inflation imply for the gold market? Well, from the fundamental perspective, higher and more permanent inflation is positive for the yellow metal. Inflation lowers the real interest rates and the purchasing power of the greenback, supporting gold. Of course, the short-term relationship between inflation and gold is more complicated (and less bullish than in theory), especially when higher inflation translates into higher nominal bond yields and expectations of a more hawkish Fed.

However, gold is a proven long-term hedge against inflation, so “gold can be a valuable component of an inflation-hedging basket”, as the WGC’s Investment Update shows. What is important here is that the Fed has become more tolerant of higher inflation. Therefore, we will have an environment of higher inflation and dovish Fed behind the curve, which implies lower real interest rates and a weaker dollar.

Hence, gold should attract attention as a hedge against inflation – actually, it’s already happening, as market sentiment toward gold has recently improved, while outflows in gold ETFs have slowed. And, as the chart below shows, the price of gold has jumped this week above $1,850. 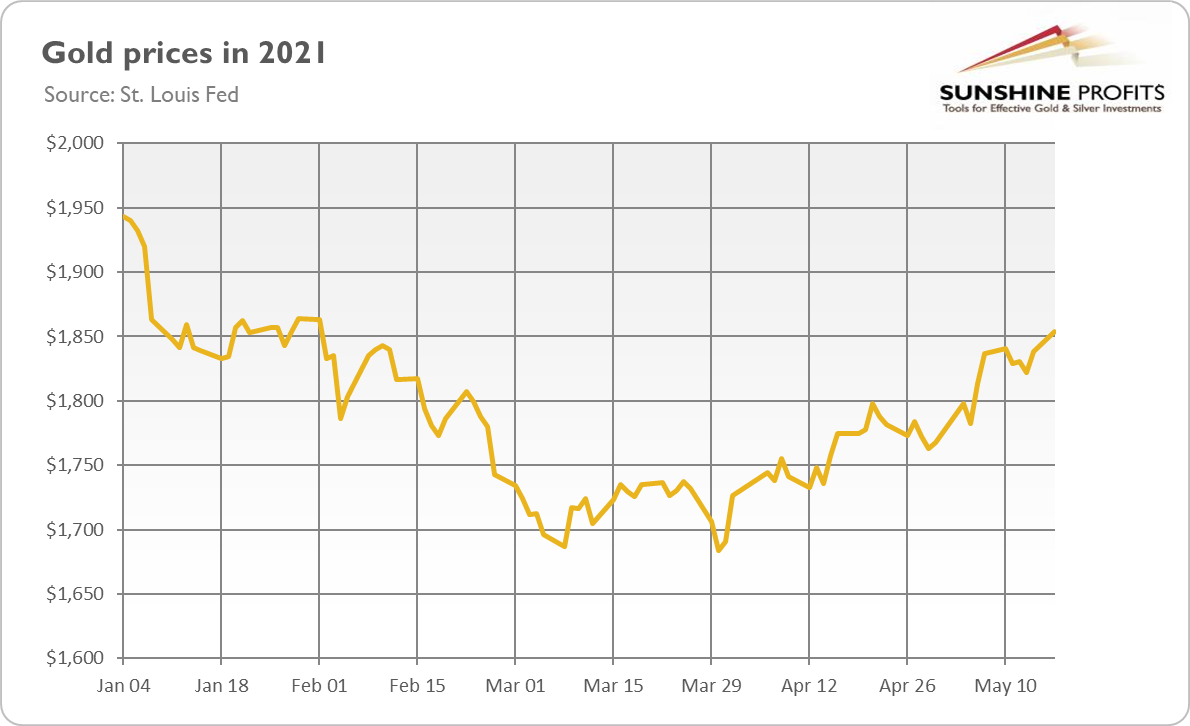 So, as I repeated several times earlier, although the threat of higher interest rates will remain, the second quarter of 2021 should be better than the first one, unless the Fed radically changes its stance.