I left Romania, behind the Iron Curtain, with my parents in 1969. Once in Switzerland, we went to a bank with an aunt, in order to cash a check. That money was meant to help us survive until my father would find some work. After my aunt was done, my father asked the cashier if they exchange Romanian currency, to which the cashier replied in a firm tone, “No, sir, not that”. Then my father asked him if they accept gold coins. Much to my surprise, with a big smile, he answered, “But of course, sir, if it’s real. How much do you have?”.

A few months later, I went on vacation with a few friends on the French Riviera. Right in front of the Cannes train station, in a small currency exchange office, I decided to exchange a few Swiss francs for some French francs. While looking at the exchange rates on the board I noticed, to my surprise, on top of the list the exchange rates for French (napoleons), Swiss (vrenelis) and British (sovereigns) gold coins, followed by the American and Canadian dollar, Swiss franc etc. It was therefore at 14 years old when I first understood that gold was not just jewelry but also much more than that... money.

Two years later, I am settling in Canada, in the midst of the US dollar crisis and the explosion in the price of gold, and I notice that, in Montréal, there are hardly any places where to buy and sell gold coins or bars. I found only one small trust company selling and buying gold while at the same time, in Switzerland, one could easily buy or sell gold in the banks of all towns and villages. Even during the speculative bubble that pushed gold up to $850 an ounce, things did not change much. This goes to show the cultural differences between Europe and North America as regards to gold.

Later on, I have had the opportunity to travel all over the world and to witness firsthand how gold was important to preserve the value of one’s assets. In the Middle East and in North Africa, I have noticed how much gold was playing a central role, especially for women, in preserving their wealth. One could buy or sell gold at almost every street corner. When I got to India, I understood why it is said that India is a black hole for gold; gold enters India but it never leaves and this has been true since the Antiquity.

Even though gold ownership was never banned in Canada, American culture dominates almost everything, gold included. From 1933 to 1971, Americans did not have the right to buy gold. Hence, several generations of economists, financial analysts and fund managers who cannot even conceive the idea of including gold in their clients’ portfolios was educated. In addition, the absence of war or revolution and a growing economy, due to vast unexploited natural resources, have also contributed for almost a hundred years to maintain the illusion of eternal happiness and absence of any cataclysm. Economic hypotheses have even been created based on the idea that U.S. Treasury bonds were almost « totally risk-free ». Of course, most of those hypotheses have since been proven wrong.

One just has to listen to billionaire Charlie Munger, an associate of Warren Buffett, stating that “gold is a great thing to sew onto your garments if you're a Jewish family in Vienna in 1939 but civilized people don't buy gold - they invest in productive businesses“, or Warren Buffett himself (a disciple of Benjamin Graham), saying, “[Gold] gets dug out of the ground in Africa, or someplace. Then we melt it down, dig another hole, bury it again and pay people to stand around guarding it. It has no utility. Anyone watching from Mars would be scratching their head”. Furthermore, the world-renowned economist, Nouriel Roubini, says, “gold remains John Maynard Keynes’s “barbarous relic”, with no intrinsic value and used mainly as a hedge against mostly irrational fear and panic”. Nevertheless, gold has been valued and a high « intrinsic value » has been attributed to it for at least 5,000 years, on all continents and by people from all cultures and education levels.

During the years 1980 to 2000, a theory became popular that debt must be considered as an asset and even a very safe one. Even banks were considering someone without any debt as too high of a risk, since that person had no credit history. At the same time, in Europe, it was considered that 5% in gold would protect against extreme risks (putting 5% in gold and hoping never having to use it). Moreover, let us not forget that, in India, gold is still used as store of value, and has been used for times immemorial.

This philosophy, stemming from America of the 1980-2000 years, has succeeded in considering gold as a very high-risk financial instrument and a « relic of the past », whereas sovereign bonds (debts) were considered risk free or almost risk free investments. This doctrine even reached Europe and the rest of the world starting in the ‘80, since most economists, financial analysts and fund managers were educated in the United States or with American manuals. Recently, a pension fund from Holland was even blamed by the Supreme Court of the country because it held gold in its fund. The Court considering that gold is a very high-risk investment in relation to stocks and sovereign bonds (gold - an asset versus bonds - a debt).

This total absence of gold in the economic and financial education system for the last hundred years, but especially for the last fifty years, has led to a misunderstanding of gold’s role in the future international monetary system.

I am convinced there will be a new international monetary system and that gold will be part of it, one way or another. It could be anything from a pure gold standard to an IMF Special Drawing Rights (SDRs) standard that would be backed by gold. This should change the attitude toward gold. We are already seeing evidence of this.

As can be seen in the graphs below, this very « anti-gold » doctrine which considers gold as a « relic of the past » and a risky investment has started to change since 2000, and especially since the financial crisis of 2008. This will be achieved very slowly, because time is needed to form a new generation with a new curriculum, unless there is a major shock like an international monetary crisis. In such a case, the rate of change would accelerate.

We are now living through a period of change as has not been seen for at least a hundred years, or even three hundred years. All economic theories have been created in an inflationary environment based on fiat paper money (debt). Almost every single economist, and even Fed governors, recognize that they don’t know how to function in a deflationary context, or in anything other than an inflationary environment.

With this new reality, we see already that gold is retaking its primordial role in assets management. More and more portfolio and wealth managers and pension fund managers accept gold in their portfolios. Even central banks are modifying the rules concerning banks assets’ risks and, above all, considering gold as a very low-risk asset (Basel III).

It is now also becoming easier to buy gold in North America. Until very recently, the only way for fund managers to hold gold for their clients was through mining stocks. In the last ten years, other instruments have been created, such as gold ETFs and other funds that invest exclusively in gold bars, or gold and silver bars, or precious metals.

In 1980, gold represented 2.77% of financial assets worldwide, and in 2000, it only represented 0.2%, but in 2012, it went up to 0.89%. Therefore, it has almost quintupled in 13 years, but is still a far outcry from the 1980 level (graphs #1, 2 and 3). This major change currently happening in North America, as much in the attitude of the official world (central banks, sovereign investment funds, pension funds) as in the attitude of the institutional investors, could put a lot of bullish pressure on the gold price in the coming decades. 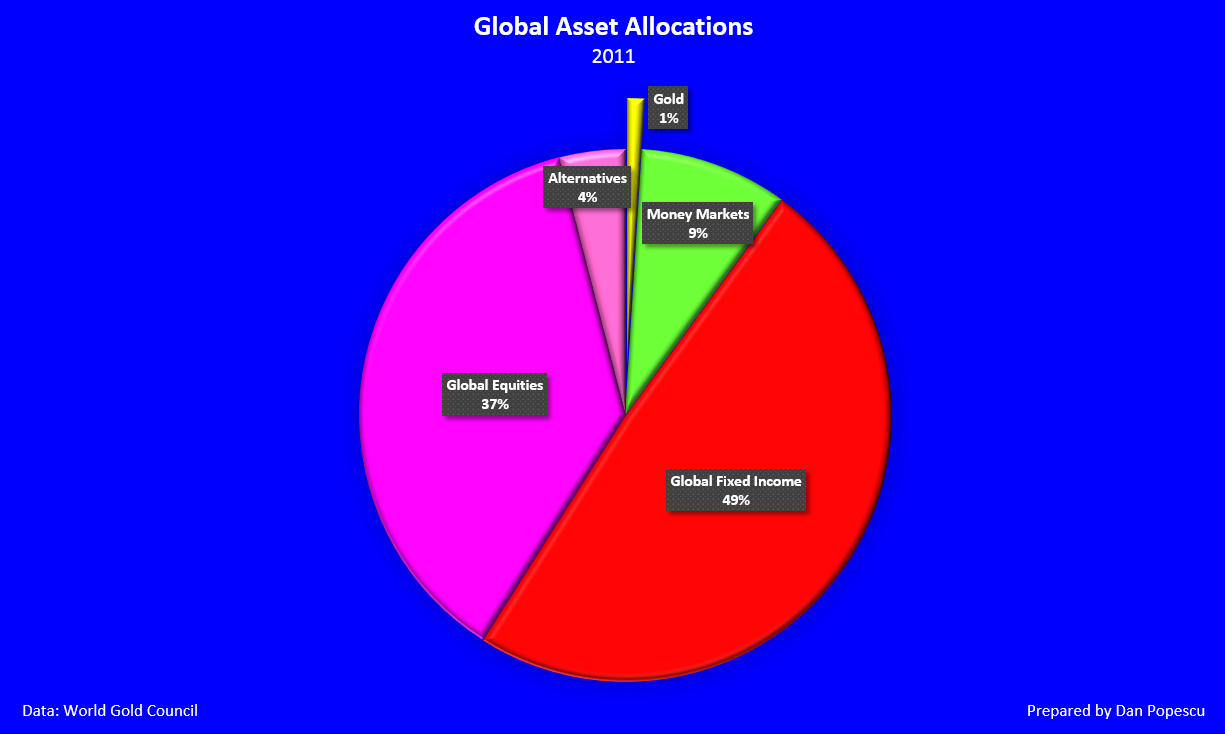 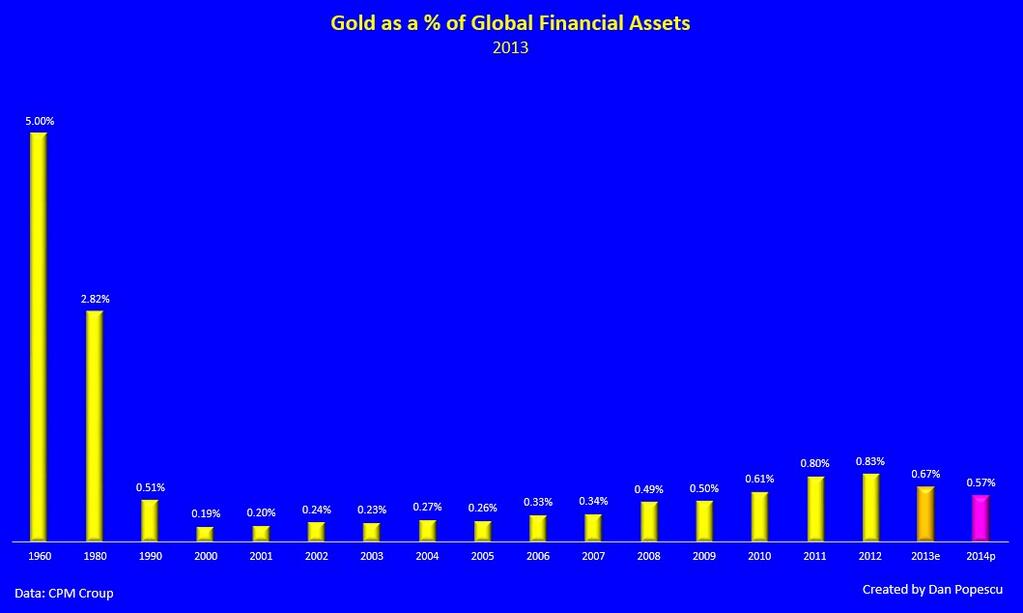 Chart #3: Market Capitalization of Above Ground Gold as a Percentage of Total U.S. Financial Assets 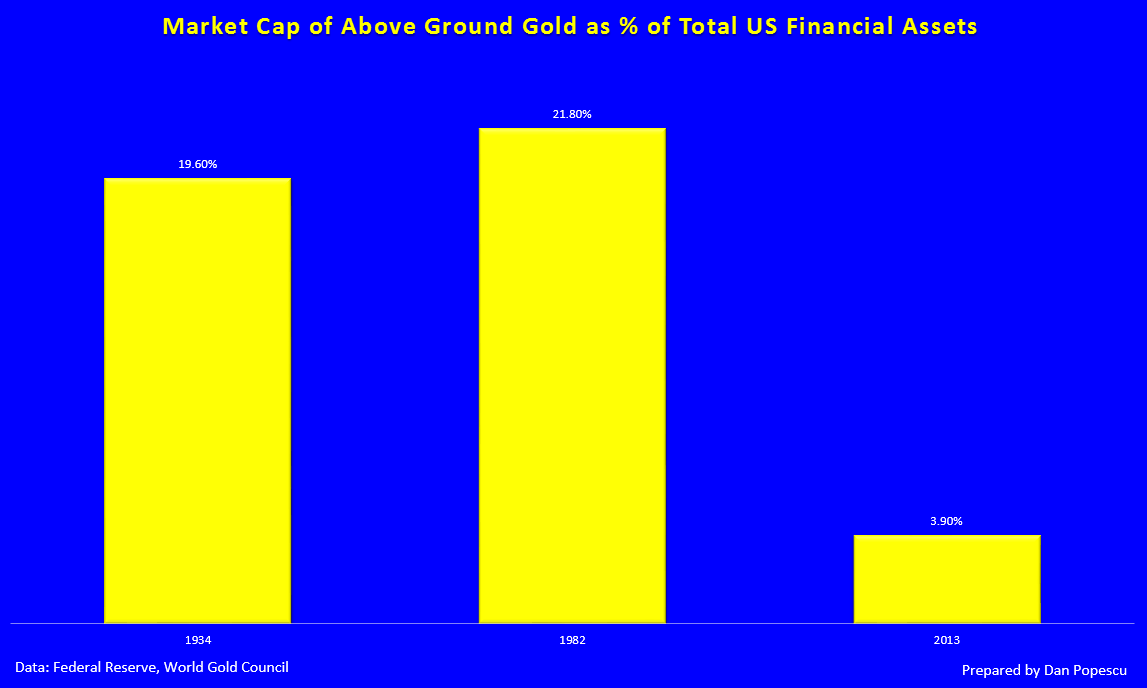 During last year’s major gold price downfall, North America was the largest seller of gold to the rest of the world, but mainly to Asia who took advantage of the low prices to buy massively. This was due to a philosophy that is the absolute opposite to that in North America where gold is considered as a speculative investment, whereas the rest of the world, but mainly Asia, considers gold as a store of value.

According to the IMF (graph #4), in the basket of assets considered potentially safe by investors, bonds (debt) dominate. Gold is the only asset that is not debt, thus without counterparty risk, and yet the remaining 89% are debt! The IMF pretends that 16% of those safe assets will become dangerous in the coming years, without mentioning which ones. However, it is obvious that, in the opinion of the IMF, gold is the only safe asset that will remain safe. 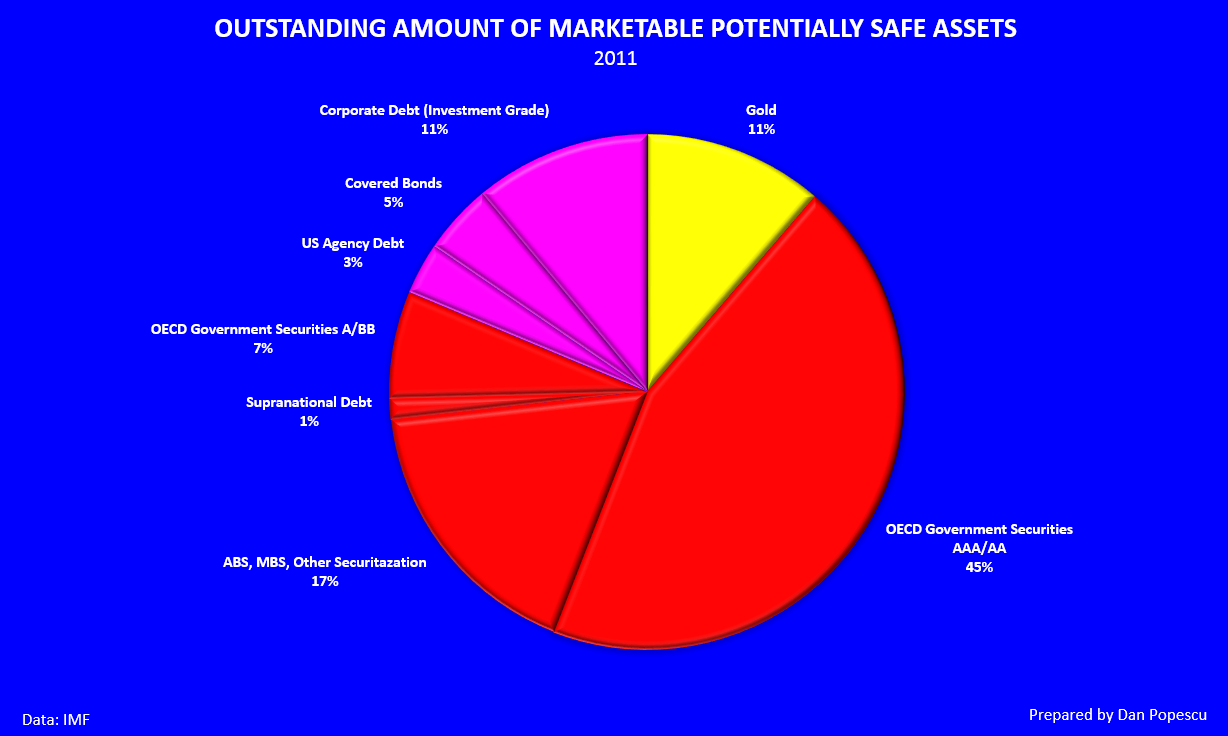 As the monetary crisis accentuates, a radical shift in economic thinking and the role of gold in wealth management will occur. It seems illogical to me to consider debt (bonds) safer than a real asset having demonstrated its role of preserving value for more than 5,000 years.