Gold vs the CRB Commodity Index 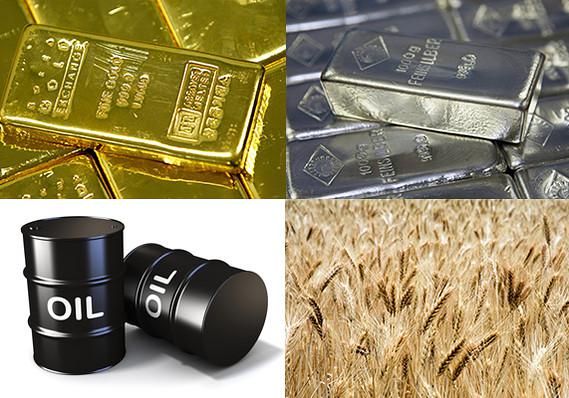 Let me tell you the story of the gold prospector who met St. Peter at the Pearly Gates. When told his occupation, St. Peter said, ‘Oh, I’m really sorry. You seem to meet all the tests to get into Heaven. But we’ve got a terrible problem. See that pen over there? That’s where we keep the gold prospectors waiting to get into Heaven. And it’s filled – we haven’t got room for even one more.’ The gold prospector thought for a minute and said, ‘Would you mind if I just said four words to those folks?’ ‘I can’t see any harm in that,’ said St. Peter. So the old-timer cupped his hands and yelled out, ‘Gold discovered in Hell!’ Immediately, the gold prospectors wrenched the lock off the door of the pen and out they flew, flapping their wings as hard as they could for the lower regions. ‘You know, that’s a pretty good trick,’ St. Peter said. ‘Move in. The place is yours. You’ve got plenty of room.’ The old fellow scratched his head and said, ‘No. If you don’t mind, I think I’ll go along with the rest of them. There may be some truth to that rumor after all.’

This story from Ben Graham that Warren Buffett likes to tell is actually about an oil prospector, but it’s just as fitting with a gold prospector.

Why am I telling you this story? Because inflation has the same effect on humans. Comes a time when even those who created the rumor end up believing in it and its beneficial effects. I have found myself so very often with wealth managers or economists who would mistake price rises due to changes in supply and demand with inflation, which is a devaluation of the medium of exchange (dollar, euro, etc.). Moreover, devaluation of the medium of exchange lets the State create confusion, to the point that people no longer know how to protect themselves, event those supposed to have created and studied it, like the economists. After having created inflation, they end up believing themselves in it, like the gold prospector.

Should I be raising my prices by 1.58% (official inflation) or by 9.17% (official inflation calculated with the method used before 1980)? If you talk to ordinary people, they will tell you inflation is around 15%. The inflation rate is an approximation with a wide margin of error and, what’s more, always manipulated by the State to create a false impression of wealth increase, whereas it often produces a decrease in wealth. Why would inflation be good and deflation be a catastrophy? The measuring stick, in my opinion, should remain as constant as possible, like all other measuring units (meter, gram, liter, etc.).

The best way to avoid this manipulation is to compare real things without using the official virtual currency (dollar, euro, etc.). Gold has always been the medium of exchange that is least likely to create inflation. Not all is perfect, of course, there is even a little inflation with gold, but gold cannot be created artificially by the State to infinity. Annual inflation in gold is only 1.64%, which corresponds also to world population growth. It corresponds also to the new annual global gold production. Many sovereigns have tried to create gold by hiring alchemists who actually ruined the sovereign without finding the magic formula. One must also know that gold is not a commodity; it is money, because it is not consumed, as petroleum that disappears once used. Almost all of the gold mined throughout history still exists.

Since gold has been chosen by people by practice as the best medium of exchange on all continents for at least 5,000 years and that industrial demand for it is only 9% (hardly recyclable), it is the best yardstick for comparing prices, while mostly avoiding this distortion/manipulation called inflation. By looking at chart #1 of nominal prices of the CRB Commodity Index since 1200, one could be tricked into thinking that prices are rising into infinity and, above all, that prices are rising faster since 1900. What a performance, right! 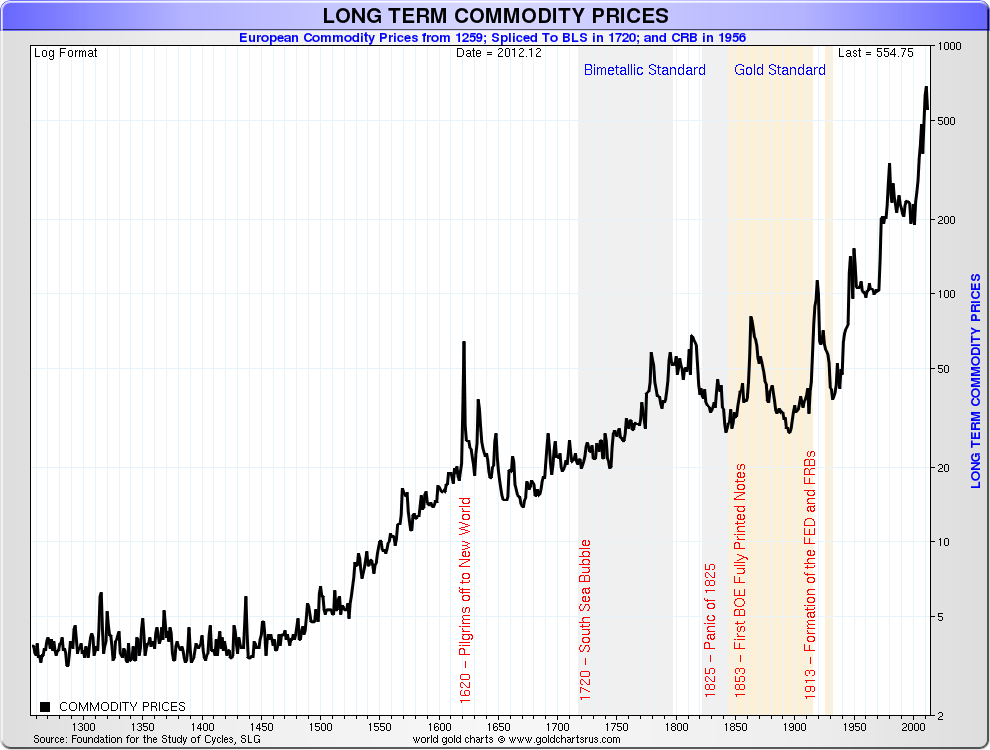 But, on the other hand, if we look (chart #2) at the same index measured in real terms (gold), we observe a steep fall in the price of commodities, especially since 1950. What could have distorted reality that much? Inflation, of course. We can observe that this explosion in prices started with the end of the gold standard and the start of the paper standard and, thus, the explosion of inflation. 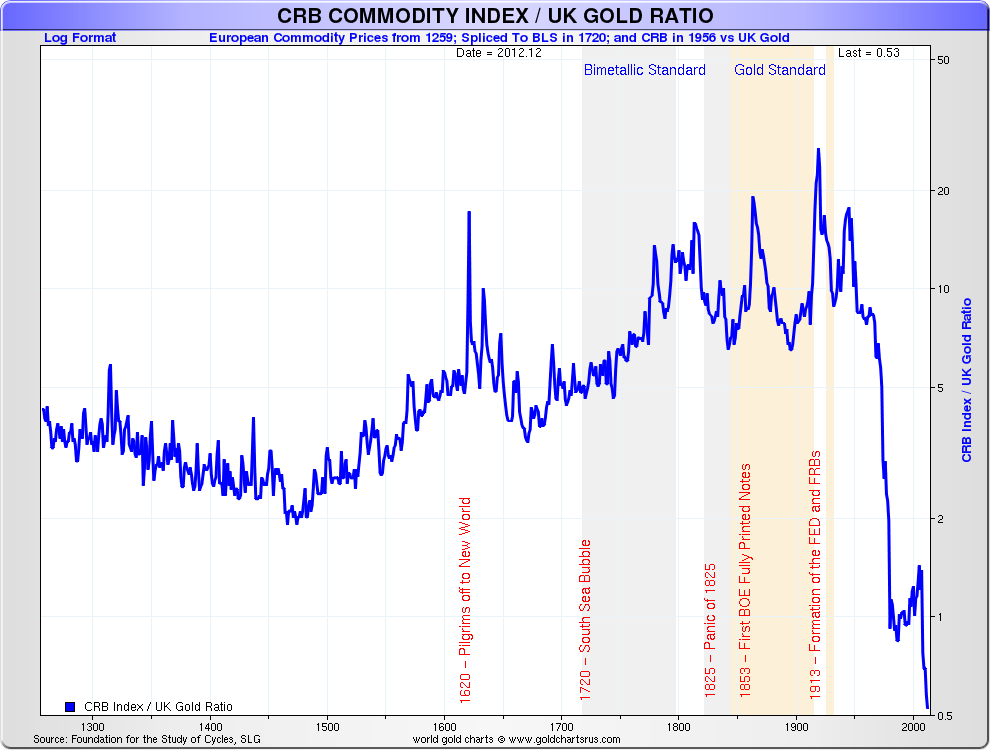 The modernization of the mining industry and agriculture has created an enormous decrease in the cost of producing commodities, especially due to technological advances, thus leading to lower prices, but the effects of inflation counter all this. Inflation creates an optical illusion that changes reality, and its goal is to mislead people.

In a period of inflation, all commodity prices rise in nominal terms, which creates the impression for some, economists included, that gold is a commodity like any other, instead of money. However, in real terms, the price doesn’t change: on the contrary, the paper money (dollar, euro, etc.) loses value. This does not keep any single commodity from fluctuating in terms of gold, due to specific supply and demand factors. In periods of economic growth demand for commodities increases and demand for cash decreases, and the opposite happens in periods of recession.

As we can observe, there is a strong positive correlation between gold and commodities if we look at them in US dollars, but when we get rid of the dollar and, thus, inflation, this correlation disappears. I believe this can be explained by the fact that gold is hard cash, whereas commodities are inputs into the economic process. It is therefore normal that, in periods of economic growth, demand for commodities increases and, thus, their prices in gold as well.

Therefore, as far as I’m concerned, it’s inflation that lets certain economists falsely pretend that gold is a commodity like any other, rather than hard money. Inflation produces an optical illusion in which even economists believe. 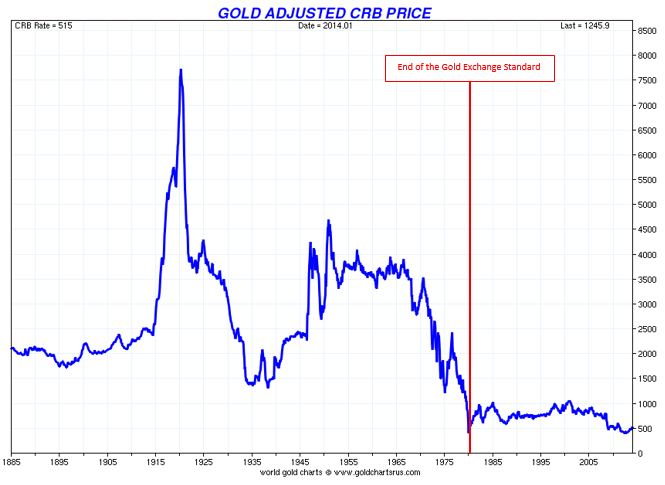 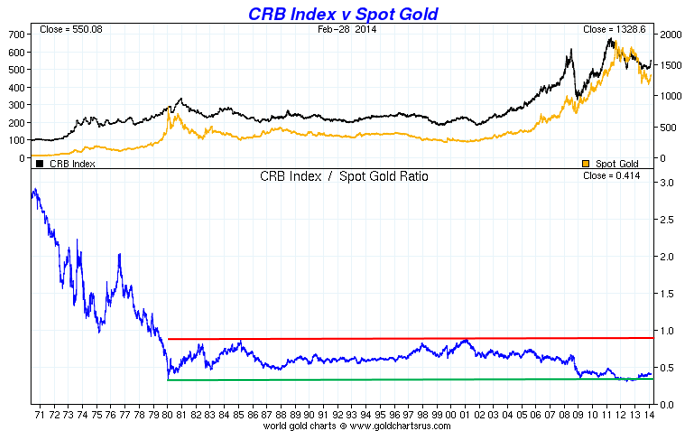 You can observe, in chart #5, how the performance of commodities increases in relation to gold and then returns to gold. According to Roy Jastram, author of Golden Constant and Silver: The Restless Metal, gold maintains its purchasing power over long periods, not because gold eventually moves toward commodity prices but because commodity prices return to gold.

Chart #5: CRB Index vs Gold in percentage since the end of the Gold Exchange Standard 1970-2014 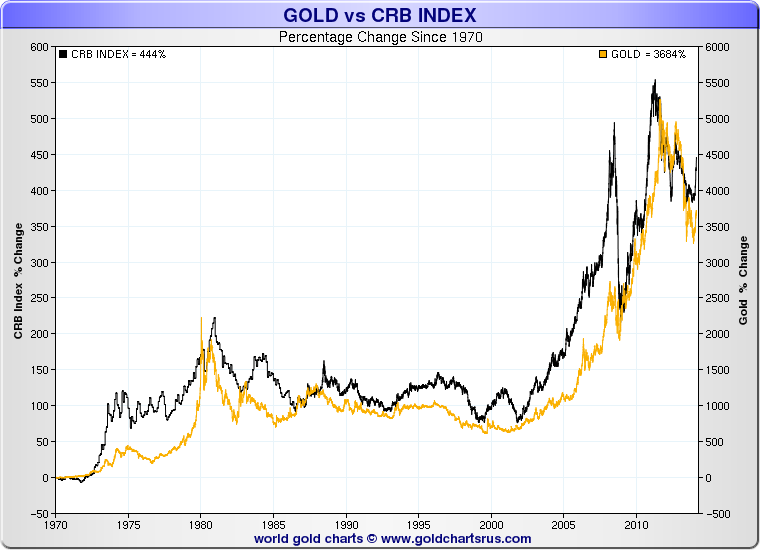 “Lenin is said to have declared that the best way to destroy the capitalist system was to debauch the currency. By a continuing process of inflation, governments can confiscate, secretly and unobserved, an important part of the wealth of their citizens.

As the inflation proceeds and the real value of the currency fluctuates wildly from month to month, all permanent relations between debtors and creditors, which form the ultimate foundation of capitalism, become so utterly disordered as to be almost meaningless; and the process of wealth-getting degenerates into a gamble and a lottery.

Lenin was certainly right. There is no subtler, no surer means of overturning the existing basis of society than to debauch the currency. The process engages all the hidden forces of economic law on the side of destruction, and does it in a manner which not one man in a million is able to diagnose.”

This is why governments love inflation so much and hate gold. 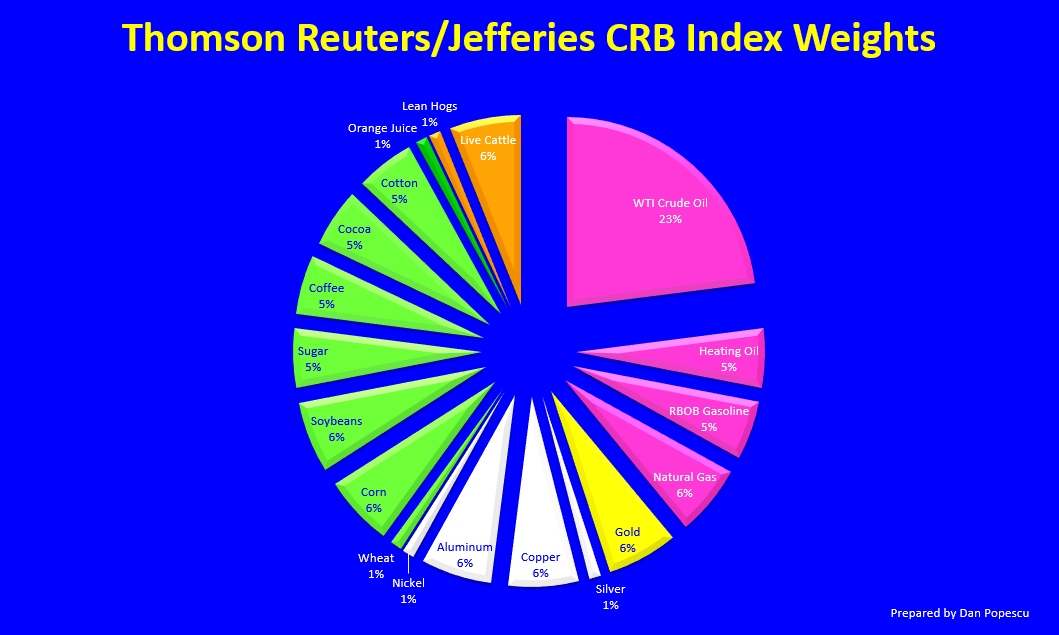