“Who owns the gold makes the rules” seems to be what the Chinese and the Russians are thinking. This is why, since the financial crisis of 2008, both countries are in a stampede to fill their coffers with gold as fast as they can. We are aware of the currency wars, but we are a lot less familiar with the gold wars raging between the East and the West and, more particularly, between China and the United States.

Even though since the Bretton Woods Conference in 1944 the United States is doing everything it can to discourage countries from owning gold as monetary reserves and pushing them to choose instead the US dollar, it does not do it itself (do as I say, not as I do). As it can be seen in graphs #1 and #2, the United States keeps 71.1% of its reserves in gold, and is the second largest holder of gold in the world since the creation of the European Union. The global average of gold reserves is 9%. 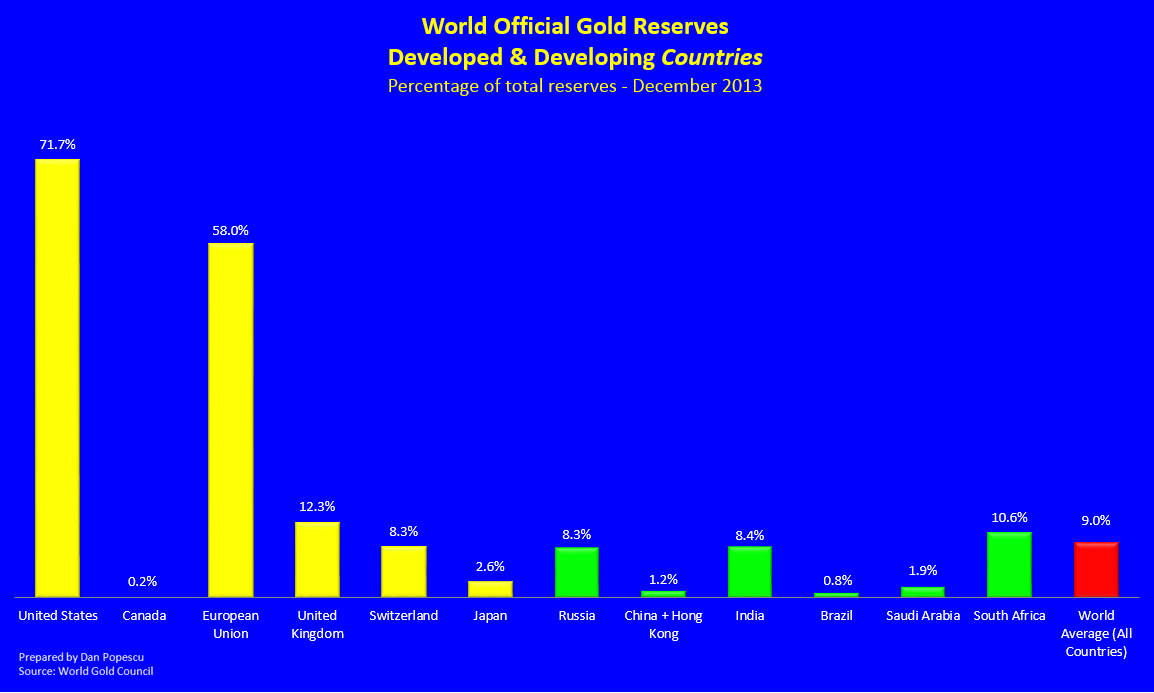 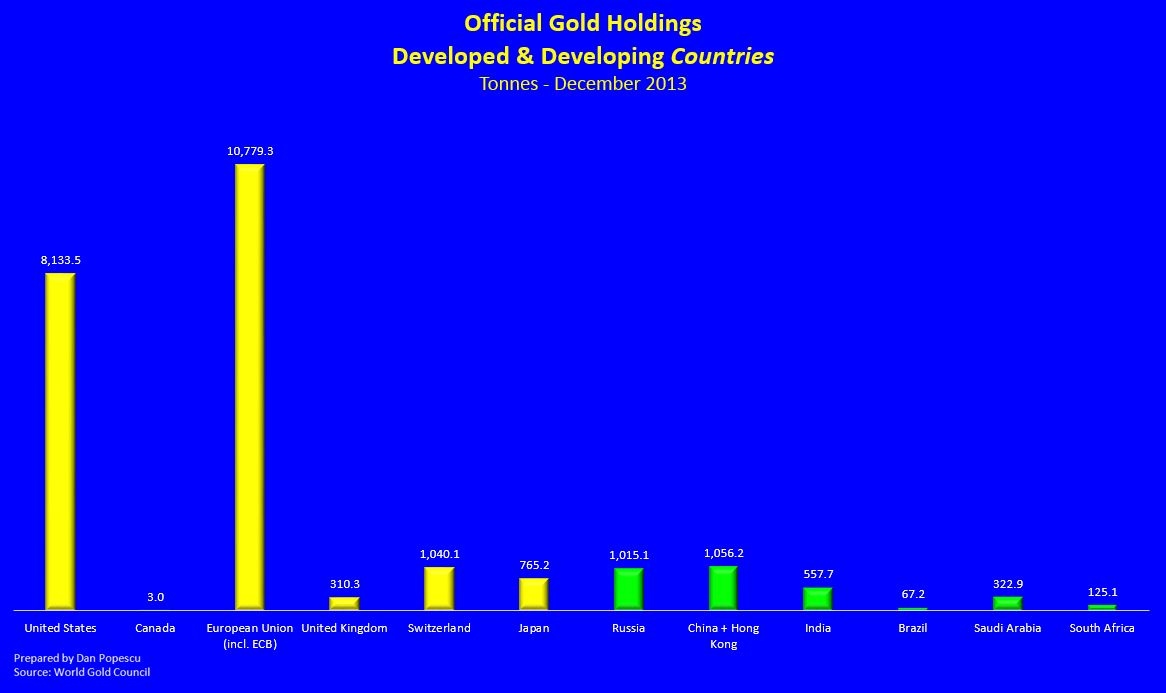 We should still keep in mind that these numbers are not up to date. China has not informed the IMF of its gold reserves since 2009. It is also the case for Saudi Arabia and, maybe, other countries. I think China will do it this year, perhaps at the gold conference to be held in September in Beijing, China. I wouldn’t be surprised at all if China were to announce holdings larger than that of the United States (if only by a single tonne), which stand at 8,136.5 tonnes. On the other hand, it could announce a lower amount and make another announcement at a strategic future date. A recent study from Bloomberg Industries speculates that China already owns 2,710 tonnes of gold and other studies point to 6,000 tonnes. It all amounts to psychological warfare within this currency/gold wars going on between countries, especially since the 2008 crisis.

If one listens to what Chinese officials have to say, it has become obvious that China has chosen gold as a weapon of choice in these currency wars, in line with the objective of eliminating the “exorbitant privilege” that the United States has since the Bretton Woods Conference and creating a new international monetary system. This “exorbitant privilege” consists in having one’s own currency being used as an international reserve currency without even any gold backing, that Nixon abolished in 1971. As of now, the US dollar represents close to 61.4% of global currency reserves, and the euro 24.2%.

Statements of Chinese officials are confirmed by a steady flow of gold from the West to the East. One can see the parabolic rise in Chinese gold imports through Hong Kong in graph #3. In addition, one must not ignore direct buying from local gold mines by China and Russia as well.

According to Alex Stanczyk, from Anglo Far-East, China owns an enormous amount of gold “off the books”, by using proxies, in order to keep the amount of its reserves secret. This is very “Chinese”, says Alex Stanczyk, if one understands the Chinese mentality. There is a game that the Chinese play, it is called Weiqi, and it is similar to chess. In Weiqi, you have to surround your enemy slowly and lay a trap, and then close the trap all at once. That is the way the Chinese think. They don’t really disclose what their plan is; they just move tiny pieces around the board in a seemingly incoherent way, but when all the pieces are lined up that’s when the trap is sprung. All of the government party leaders play this game, and the CEO’s and chairman of China’s largest businesses are all part of the party. Kenneth W. Hoffman, senior analyst in metals and mining at Bloomberg Industries, says that, “based on conversations with officials in China and Mongolia, it’s evident that China feels they want as much gold as the U.S.” 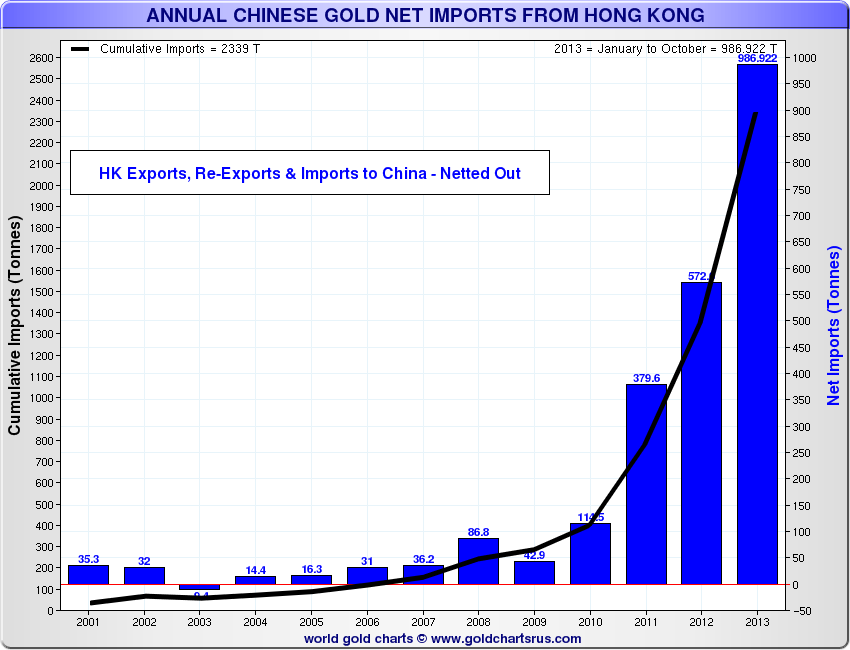 However, let us not forget the less obvious role that Russia is playing in these gold wars. It has also decided to do all it can to dethrone the US dollar from its pedestal. We observe, in graph #4, that Russia, after the financial crisis, has also decided to increase substantially its gold reserves. Contrary to China, I think Russia is less patient, and is maneuvering behind the scenes for a quicker change to the monetary system. The massive gold buying and geopolitical strategies of Russia do confirm, in my opinion, this speculation. 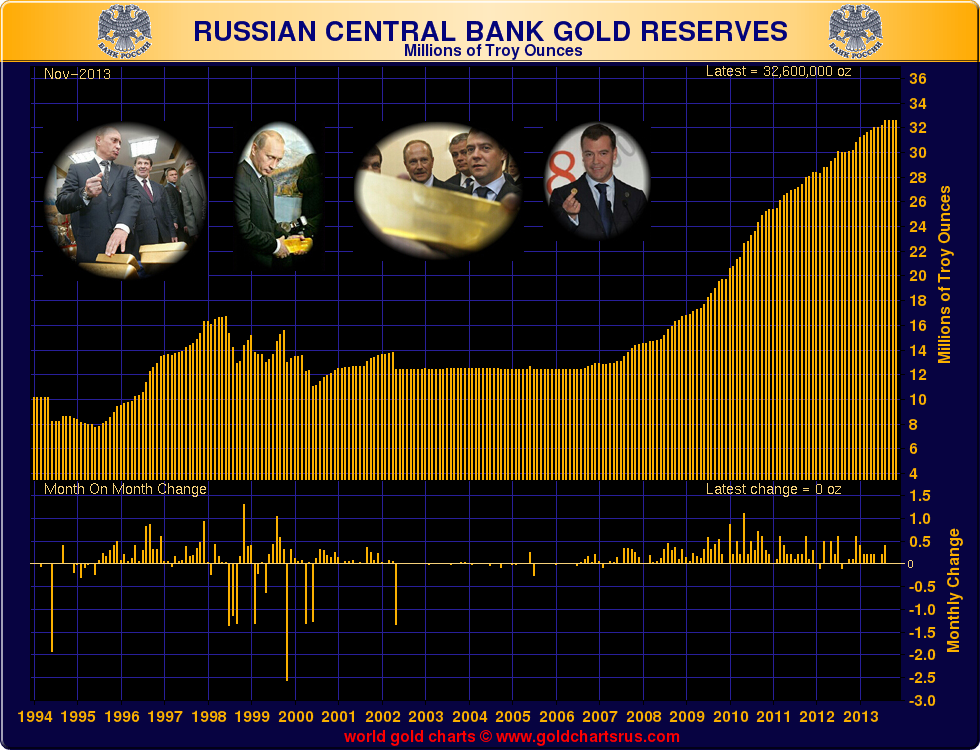 Other countries could be playing secondary roles, albeit strategic ones, in this gold war. As it can be seen in graphs #1 and #2, the European Union is the largest holder of gold reserves in the world. Saudi Arabia is also diversifying its reserves, quietly buying large quantities of gold. Like China, it also announced, four years ago, that its gold reserves had grown sensibly, by a simple account transfer. Because of its importance in the oil market and the relation between oil and gold prices, Saudi Arabia should not be dismissed. It could also follow China with a similar announcement. India is also a large holder of gold, maybe even the largest. Even if India only possesses 557.7 tonnes in its official reserves, it is estimated that there is between 20,000 and 30,000 tonnes of gold in India, if we tally the gold held by individuals and other institutions. It is believed that India, which accounts for 20% of the world population, owns about 20% of the global gold stock.

It is now obvious that there are currency and gold wars between the West and the East with, out in front, the United States and China. The United States, at all costs, wishes to maintain the present system, which is very much in its favor, whereas China and Russia would like to replace it. Central banks’ gold reserves are kept secret and it is difficult to know with precision what they really are. Even the United States doesn’t want to publish the exact numbers of its gold reserves. We supposedly know the amount, but we don’t know how much of it has been leased. As far as China is concerned, there is no information available that would show how much of the significant amount of gold being imported into China is destined to their central bank’s reserves. However, one can speculate that it would be most of it.

Gold has always followed wealth and, these days, wealth is shifting from the West to the East. As it can be seen in graph #5, advanced economies (generally in the West) have gotten poorer and, consequently, have increased their levels of debt, whereas emerging economies have gotten richer and have reduced their debt. A similar phenomenon occurred the other way around in 1945 when Europe got weaker (mainly because of two wars) while America got richer. That situation had caused a massive transfer of gold from Europe to America. 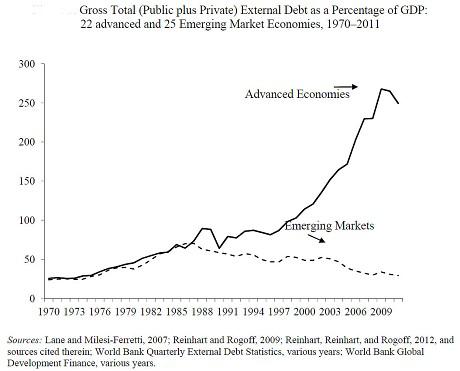 Notice, in graph #6 below, the acceleration of the increase of Asian gold reserves as a percentage of global gold reserves. 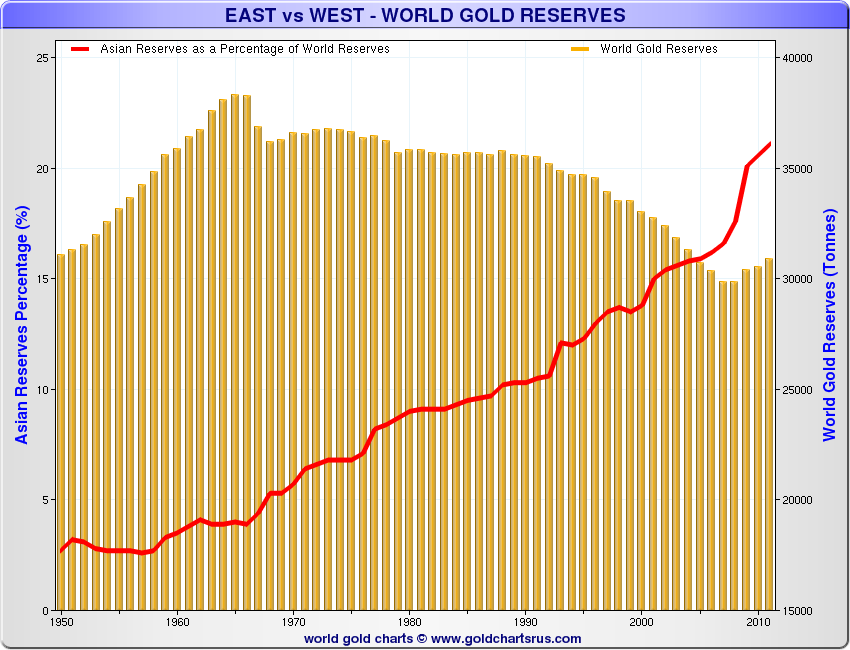 In conclusion, one must expect, this year or next year at the latest, a major crisis in the international monetary system that will cause a massive selloff of the US dollar and, consequently, a massive loss of its exchange rate. At the same time, I expect the central banks and sovereign funds to accelerate their gold buying, which will cause the price of gold to go higher quickly. This rise will continue until a new monetary system takes place. I am convinced that, within five years, central banks will have augmented their gold reserves from today’s 30,000 tonnes to 40,000 tonnes, which would correspond to the ‘60s peak (see graph #7). I believe these gold wars between the central banks will push gold toward a level much higher than $5,000. 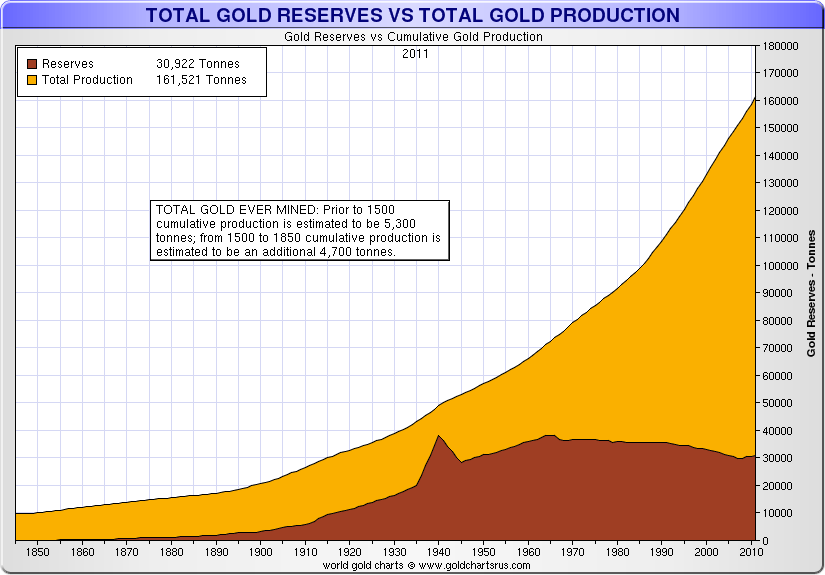