Two months ago, when the market was in a state of near-total chaos as a result of a sudden collapse in global supply chains due to the hasty coronavirus lockdowns, one market that saw unprecedented turmoil was that of physical gold.

As we pointed out in late March, due to a sudden breakdown in physical gold supply as the world's top gold refiners, those located in the southern Swiss town of Ticino, namely Valcambi, Pamp and Argor-Heraeus, suddenly stopped producing gold, the result was a record divergence in the price of spot gold vs gold futures contracts... 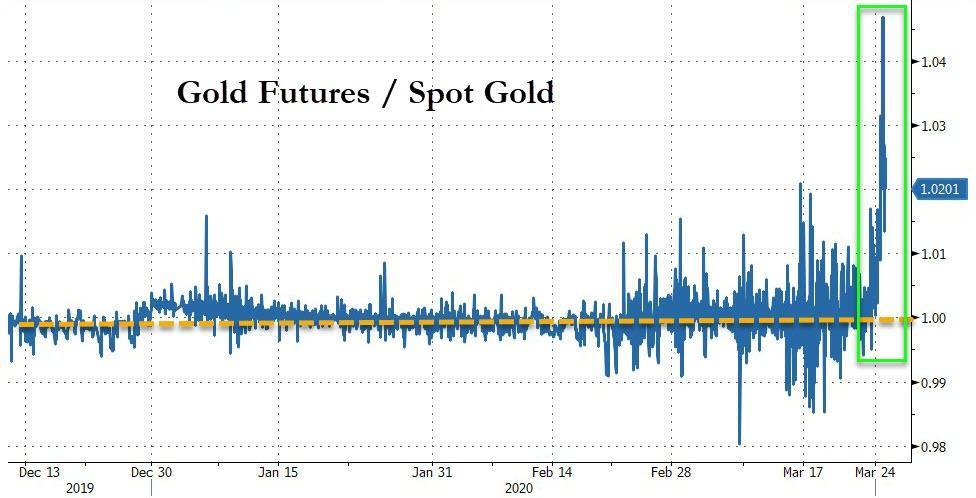 ... with gold futures decoupling and trading far above spot prices. 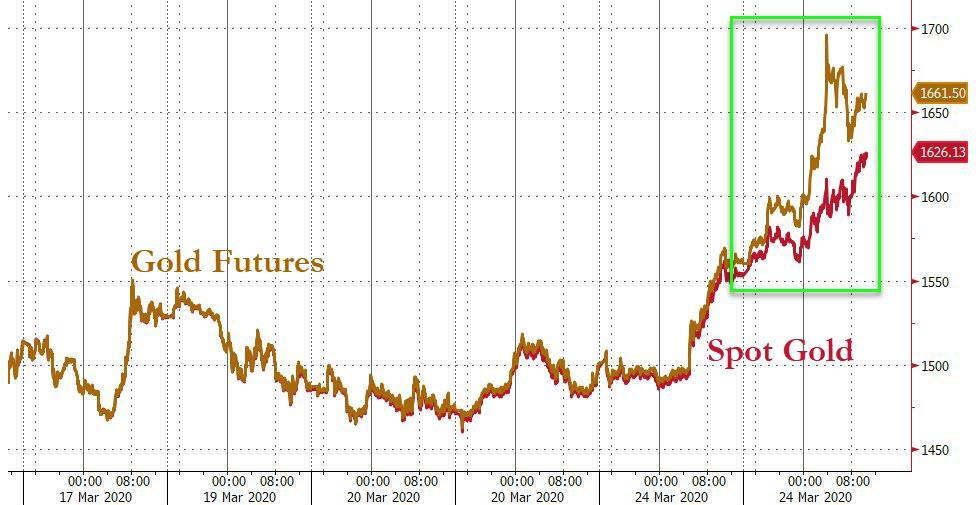 The resulting record divergence in gold futures vs spot (in some way analogous to what happened to the price of the prompt WTI contract in April, when the May WTI contract traded as low as ($40) as traders were willing to pay buyers to store oil in a world where there was suddenly no space for the physical commodity), unleashed a flood of physical gold into the US as a record scramble by traders rushing to take advantage of this arbitrage opportunity by shipping bullion to New York sparked what Bloomberg said "may be one of the largest ever physical transfers of the metal."

"The flows into New York are unprecedented," Allan Finn, the global commodities director at logistics and security provider Malca-Amit told Bloomberg as his company’s teams in New York have been working 24 hours a day to cope with unprecedented demand for physical gold while navigating lockdowns, flight disruptions and social distancing.

Since late March, no less than 550 tons of gold - worth $30 billion at today’s price and roughly equal to global mine output in the period - have been added to Comex warehouse stockpiles; hundreds of tons of that was imported. On its own that amount of gold would represent the 11th largest sovereign holding, larger than the ECB's official 504.8 tons of gold. 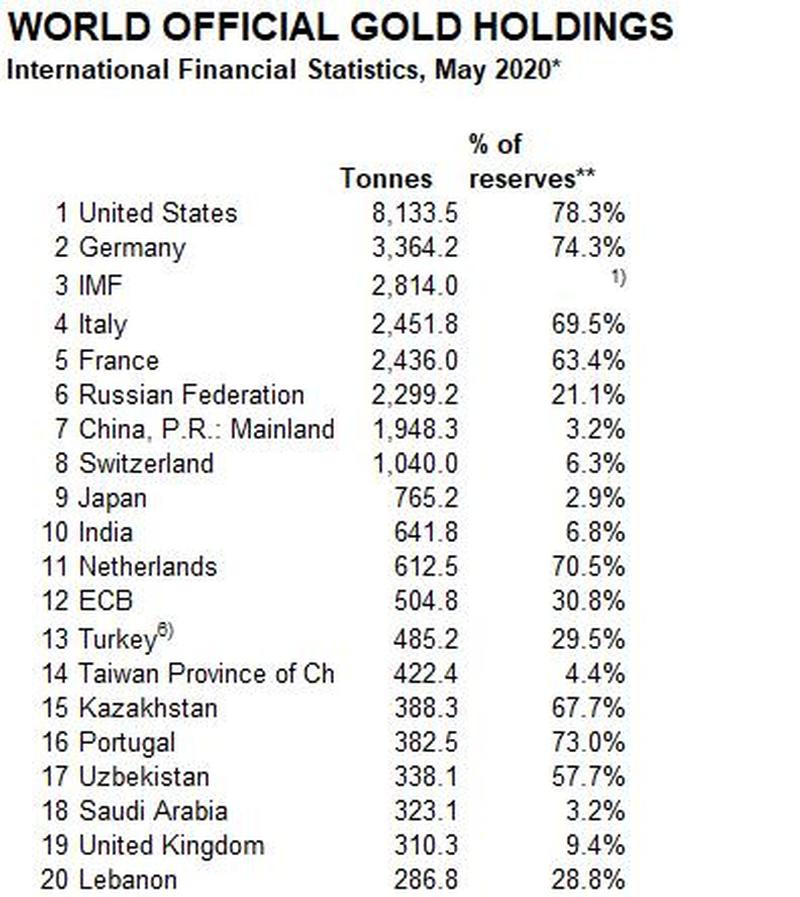 Traditionally, while tens of billions of dollars of gold change hands every day in financial markets, a much smaller amount tends to physically move between vaults in trading hubs like London, Zurich and New York. But that has not been the case in the past two months: it all started to change as the Covid-19 crisis affected the supply chain. As Bloomberg explains what we first highlighted two months ago:

"When planes were grounded and Swiss refineries closed in late March, traders were worried they wouldn’t be able to get gold to New York in time to deliver against futures contracts. That caused futures, which typically trade in lockstep with the London spot price, to soar to a premium of as much as $70 an ounce.

That created an opportunity for enterprising traders: buy gold somewhere in the world at the spot price, sell futures, and benefit from the difference by shipping the metal to New York."

The scale of the trade has been revealed in exchange reports, import and export data and comments from some of the leading precious metals shipping and vaulting companies. It all came to a head on Thursday, when traders declared their intent to deliver a record 2.8 million ounces of gold against the June Comex contract, the largest daily delivery notice in exchange data going back to 1994. 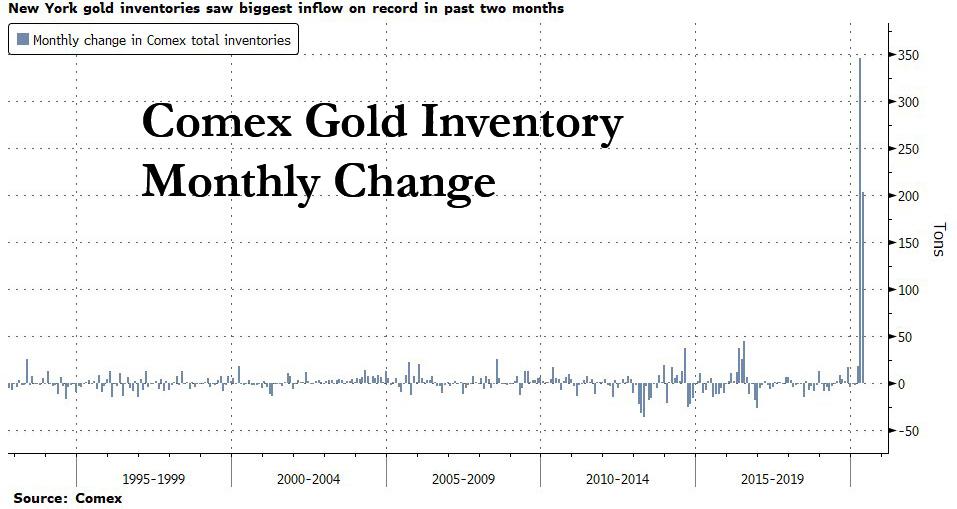 The bulk of this gold came from Switzerland, as Swiss gold exports to the US surged, reaching 111.7 tons in April, the highest on record. Already in March gold imports topped $3 billion, according to the Census Bureau, the highest in at least a decade. 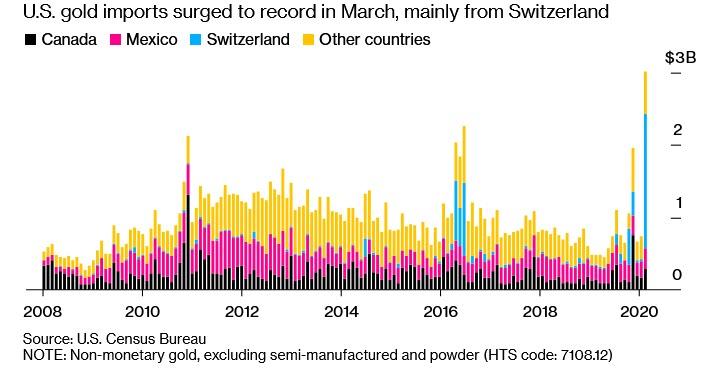 To meet the unprecedented demand for physical gold, refineries as far away as Australia have ramped up output of kilobars - the form typically delivered on the Comex - to ship to New York.

For Brink’s Managing Director Mark Woolley, the spike in demand to ship gold to New York has been unlike anything he’s seen in 20 years in the market.

“The amount of metal that we’ve successfully moved into New York is pretty significant,” he said Thursday on a webinar hosted by the London Bullion Market Association. “It’s probably not far off the total amount of metal that’s been mined in this period.”

As discussed previously, the CME Group which owns Comex, responded to the unprecedented market dislocation and the sudden lack of physical gold in New York by introducing a new contract allowing the delivery of 400-ounce bars, the type traded in London. Still, “other changes need to be at least considered,” according to LBMA Chairman Paul Fisher.

With investor demand for physical off the charts, the enormous movement of gold has been a blessing for logistics companies but also a curse: not only have passenger flights - on which shipments are typically transported - been grounded, but New York City, where many Comex warehouses are located (recall JPM's giant gold vault just happened to be located right next to the NY Fed's), has also been a hotspot for the virus.

That said, while large volumes and virus-related restrictions at vaults and airports caused some delivery delays, much of the spike in the premium for futures contracts in March - which left banks such as HSBC suffering hundreds of millions in losses - was driven by perception rather than reality, Finn said.

"My own personal opinion is that any assessment on the inability to get gold in was ill-informed at the time and was made on assumptions rather than fact," he said.

Still, the bonanza for precious metals shippers may last a while. As we pointed out last week, large deliveries have seen June Comex futures drop to a discount to spot prices this week, but later dated futures are still at a premium. In fact, according to BofA, in a world in which central banks are flooding markets will trillions in freshly printed fiat and faith in the monetary system is quietly shrinking one day at a time, the one asset the "smart money" wants - as it dumps stocks - is, you guessed it, gold.

In fact, a simple correlation between the flood in the global money supply and the price of gold suggests the yellow metal has about $1000 of upside.

Meanwhile, as investor interest in other precious metals picked up, futures for silver and platinum have also traded at premiums to spot: “The guys in New York have done a great job,” said Brian Hayward, head of Loomis International U.K.

"We’re seeing a lot of silver head that way right now" Hayward said in what may be very good news for fans of silver, which recently hit record lows against gold... 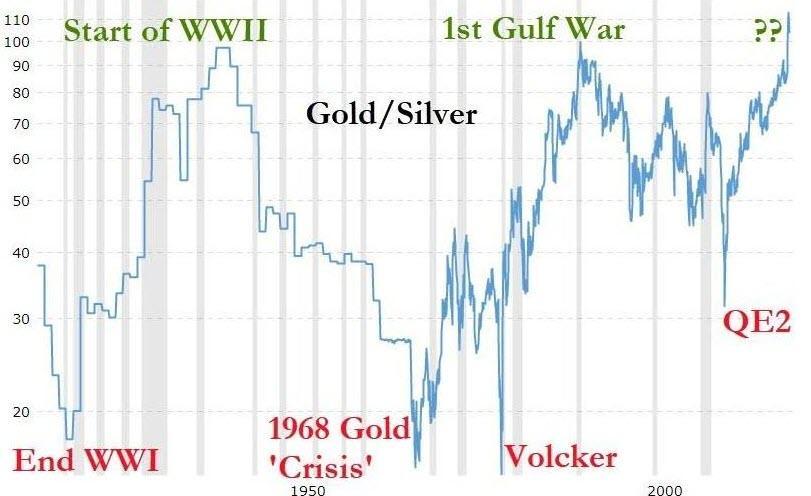 ... a move which may very soon reverse violently.