1) Gold broke last week a downtrend started in mid-May while silver remains within the downtrend with no indication as of now it intends to follow gold and break out to the upside. Gold stopped short of $1,195 resistance level and silver dropped from $16.2 and is approaching the support level of $15.9.

2) Two weeks ago, China announced that it has adopted the International Monetary Fund's standards to calculate its balance of payments data, as authorities work to turn the yuan into a global reserve currency. This decision could lead to a new gold reserve announcement. The last time China updated its gold reserves was in 2009 at 1,054.1 tonnes. Speculations go that China has accumulated between 4,000 and 6,000 tonnes. Now, with the decision to officially request the inclusion of the yuan in the SDR basket an announcement by October becomes almost certain. Any amount above 6,000 tonnes will shock the gold market and push the gold price up. Over 8,133.5 tonnes, which is the US official gold reserves, will be a catalyst for others to buy or speed up their buying. China can also announce only a partial amount in October leaving some gold under its control but in some other accounts for strategic future announcement. 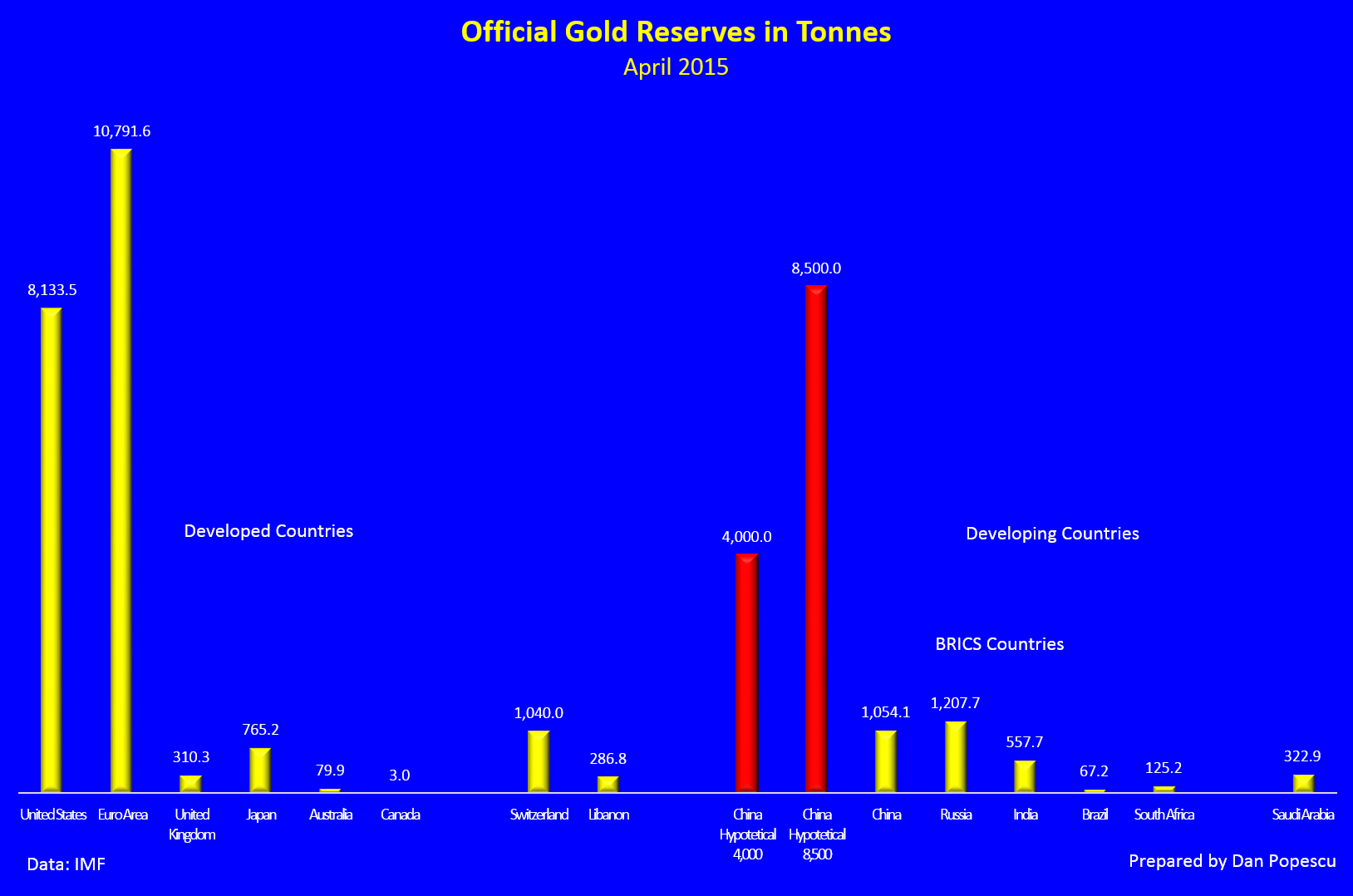 3) In a recent article in the British newspaper The Telegraph, Andrew Critchlow, says that German investors have piled into gold bars and coins in the first quarter of the year as a hedge against European Central Bank policy and the threat of a Greek default bringing down the Eurozone. The latest figures from the World Gold Council show that Germans increased their buying of gold coins and bars of gold by 20 percent to 32.2 tonnes in the last quarter, the highest rate of purchases seen in a year.

4) The Bank of Russia announced two weeks ago that it has increased again its gold reserves and at the same time, it is continuing to sell its US dollar foreign exchange reserves by selling US treasuries. From an article on Bloomberg, we find that the euro passed the US dollar in Russian reserves for the first time since 2008. The dollar’s share plunged to 39.6 percent as of January 1st from 44.8 percent a year earlier, the central bank said in an annual report published on its website. The euro accounted for 46.1 percent at the start of 2015, up from 41.5 percent. Both Russia and China have diversified their foreign exchange reserves away from the US dollar on a constant base since the 2008 crisis.

Elvira Nabiullina, President, Russia's Central Bank, said last week that Russia’s international reserves which are currently at 357 billion US dollars will be increased to 500 billion US dollars (which Russia owned in 2012-2013). Later in the week Dimitry Tulin, who manages Monetary Policy at Russia’s central bank stated that Russia is increasing its gold holdings because even though “the price of gold swings, gold is a reserve asset that is a 100 percent guaranty from legal and political risks”. 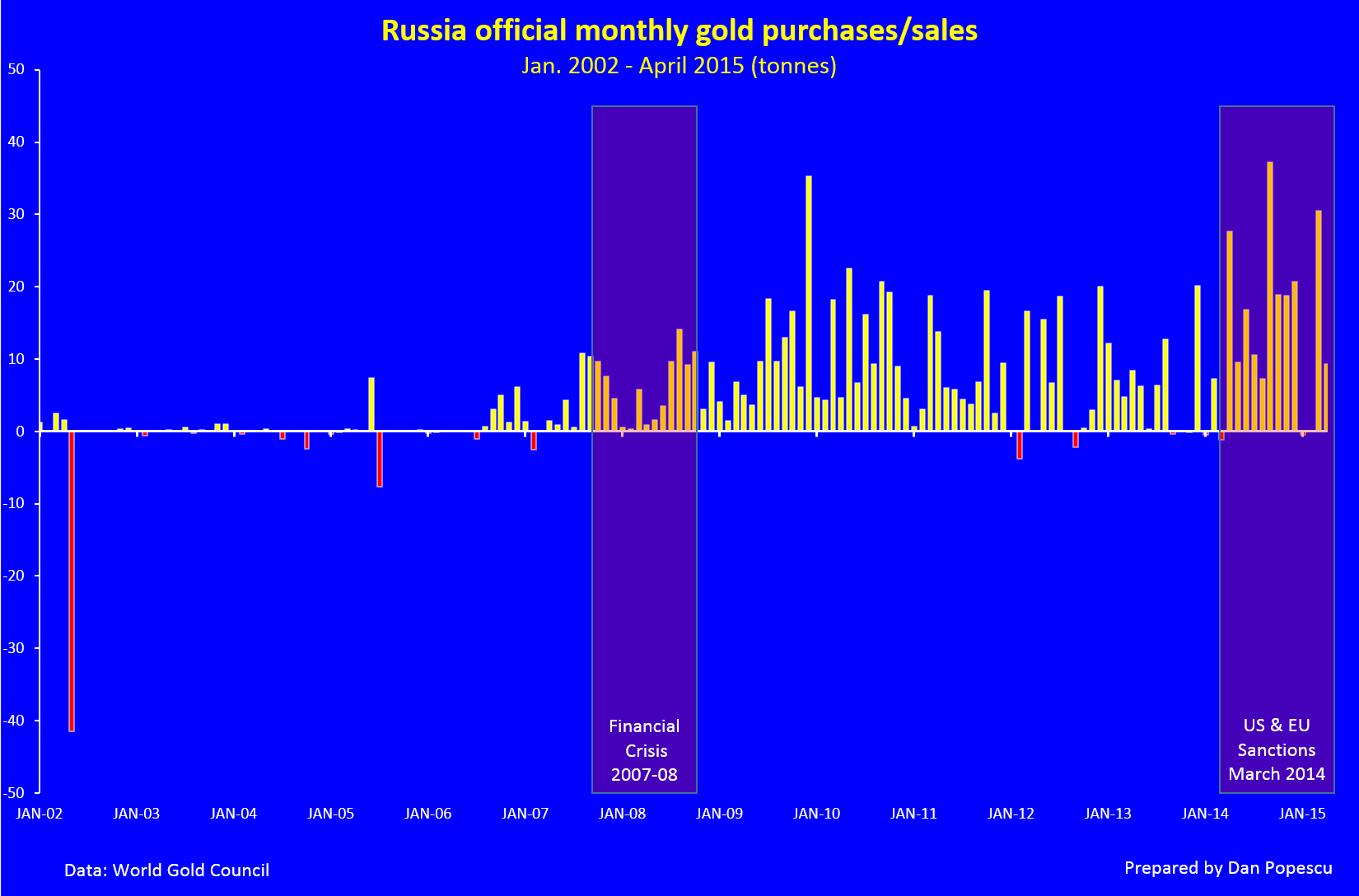 5) Recently several media services have brought up the issue of the control of the gold market. In an article in the May 2014 issue of the Gold Forecaster, Julian Phillips stated that China has the control of the gold price. “China is not only the main force in the global gold market, but they control the gold market.” He also states that the Chinese play their control very cleverly so that it is not apparent and that they found a way to buy without pushing up the gold price. According to him China, through their selected bullion banks, are buyers of gold both for the retail market and for the “official” in both London and New York “on the dips” and that to ensure prices stay low, the gold they buy comes mainly from “off-market” sources. Julian Phillips believes and we agree that some large portion of the reserves held by the population can if needed be brought back under official control.

6) The McKinsey Global Institute recently published a report highlighting the bloated, unsustainable levels of debt that have been accumulated globally and the huge risks when interest rates begin to rise again. If we look at a chart of the US debt versus the price of gold, we can observe a very close correlation between them even if not perfect. However, in the recent years the correlation has been broken. It is our view that it is the price (maybe due to manipulation) that has been kept down, while the US debt (and also the global debt) has continued its ascend. Soon we believe gold will rejoin the uptrend of the US debt and not the other way. 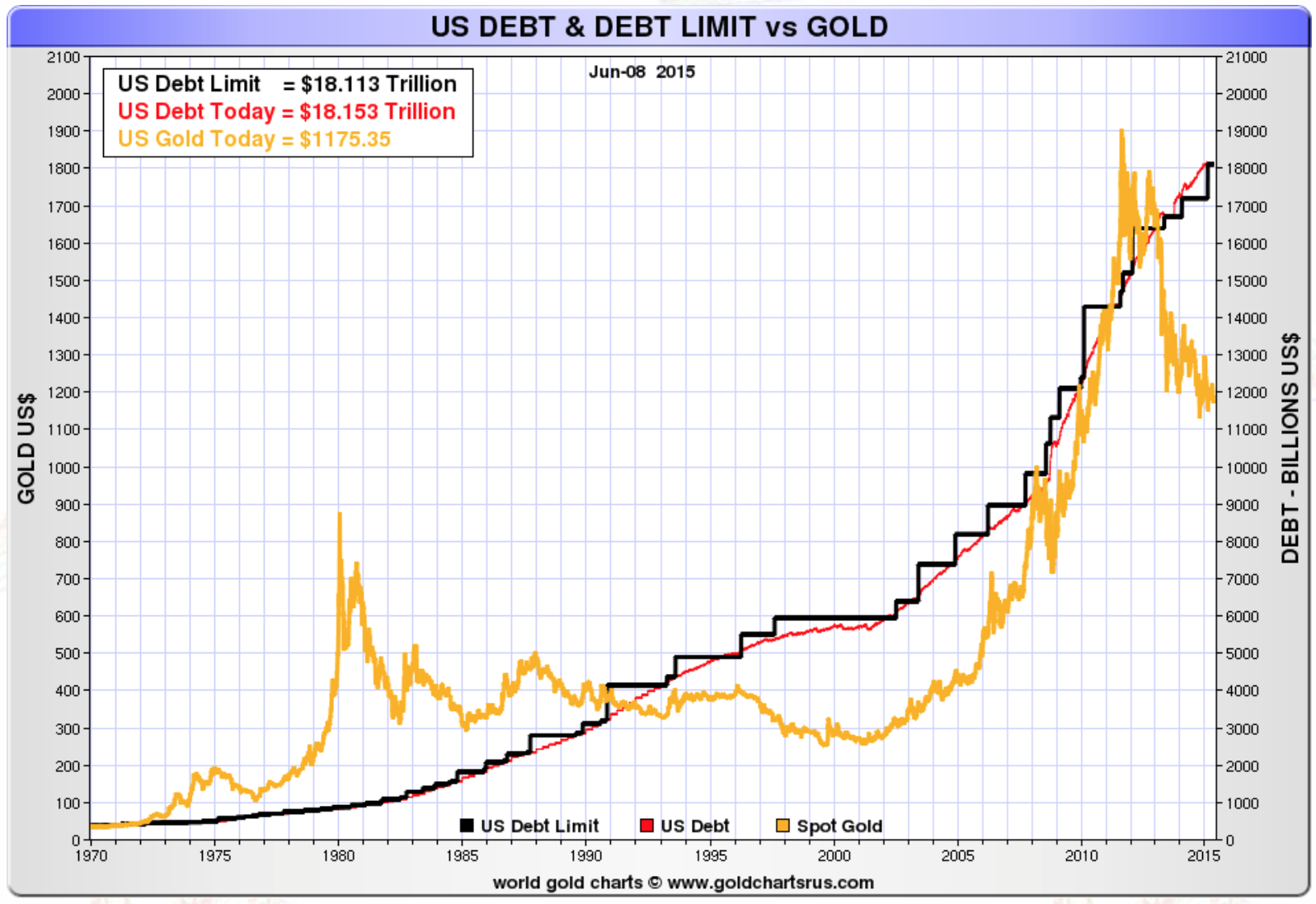 7) In a recent article on dark gold, Bron Suchecki looks at the transparency of the gold market. It is very important when looking at the gold market to understand that the gold market is often referred to as being “opaque” because it lacks transparency. This is something of an understatement. When it comes to gold held by investors, dark gold dominates. While a lot of this dark gold is held privately, much of it would also be held in vaults operated by the major security firms or run by bullion banks. The “transparent” gold represents only 1.1 percent of all gold or 5.7 percent of all the gold held by investors. This chart demonstrates the relative insignificance of the transparent gold. 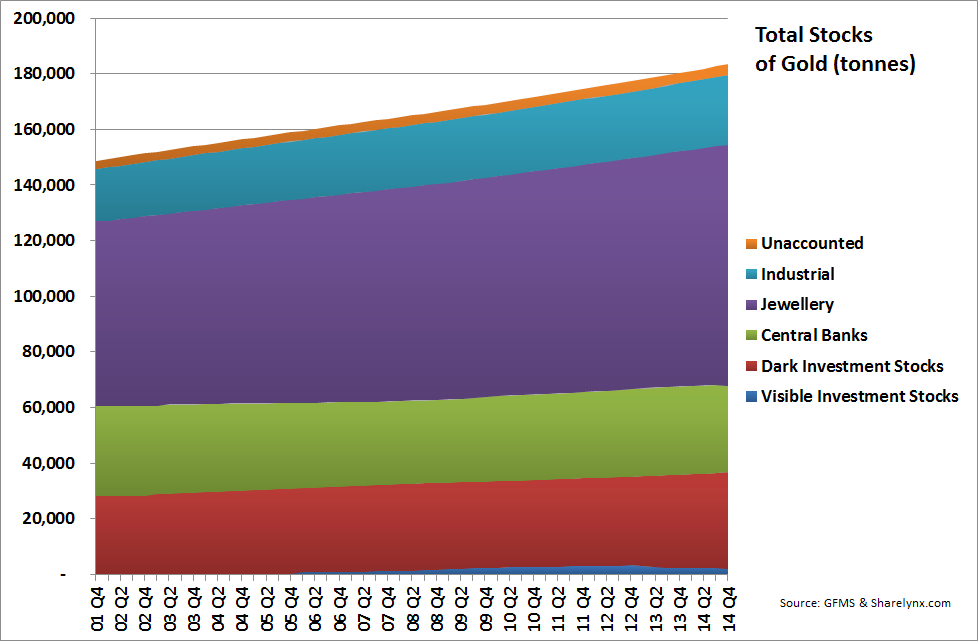 8) And last, Bloomberg, in an article this week, tell us that the government of India is working on a plan to monetize the gold accumulated by the Indian population. The government says about 20,000 metric tonnes of gold reside in temples or hide in drawers; more than twice the official gold holdings of the US which are 8,133.5 tonnes.

Ray Dalio, founder of the investment firm Bridgewater Associates said recently, "If You Don't Own Gold, You Either Don't Know History Or Economics"

- China has control of the Gold Price http://news.goldseek.com/GoldForecaster/1398801600.php

- Ray Dalio: "If You Don't Own Gold, You Know Neither History Nor Economics" http://www.zerohedge.com/news/2015-05-14/ray-dalio-if-you-dont-own-gold-you-either-dont-know-history-or-economics