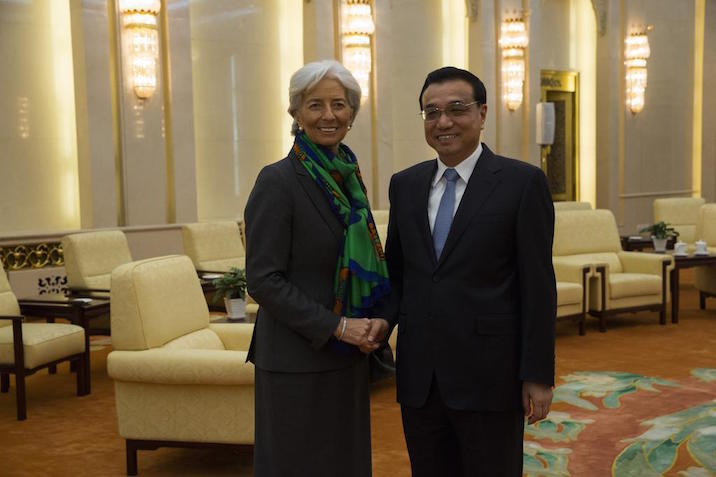 During the recent visit to China by the president of the International Monetary Fund (IMF), Christine Lagarde, the government of China formally requested that the Yuan be included in the Special Drawing Rights (SDR) at this year’s review. I wrote a short article on gold and the SDR in April 2014, when few were even mentioning it. Let me, with the help of some charts, explain what the SDR is, its relation to gold and what role it can play in the international monetary system, if any.

The IMF created the Special Drawing Rights (SDR) in 1969. Originally, the value of an SDR was defined as equivalent to 0.888671 grams of fine gold which, then, was also equivalent to 1 US dollar (1oz of gold = 35 SDRs = US$35). After the gold exchange standard, commonly called the Bretton Woods Accords, collapsed in 1973, the SDR was redefined as a basket of currencies, today comprising of euros, Japanese yens, British pounds and US dollars. It is calculated as being the sum of a specific amount of the four currencies in the basket, rated in US dollars based on the exchange rate fixed at noon, each day, on the London market. Today, since December 2010, the value of one SDR equals the sum of 0.423 euro, 12.1 yens, 0.111 British pound and 0.66 US dollar. 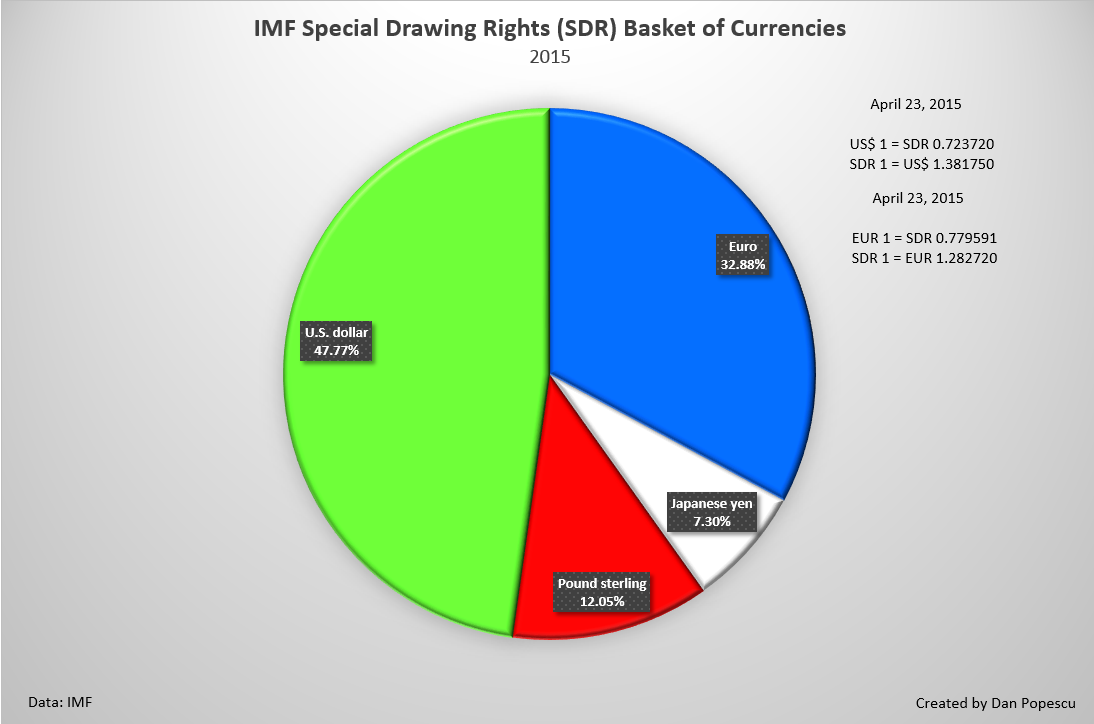 According to the statutes of the IMF, member countries are forbidden to tie their national currency to gold. This is the reason why Switzerland was forced, when it became an IMF member in 1992, to abandon its 40% gold coverage of its currency, which was until then written in its Constitution. SDRs are neither a currency, and neither are they IMF-issued credits. It is rather a potential claim on the free-floating currencies of the IMF members. China is the only one of the six large world economies whose currency (Yuan) does not have reserve currency status.

Many scenarios exist to create an international fiat currency based on a basket of currencies like the SDR (chart #1). One would include the Chinese Yuan and another would include currencies from the other BRICS countries (China yuan, Russian ruble, Indian rupee, Brazilian real and South-African rand). Another version would also include gold (charts #2 and #3).

Robert Mundell, Nobel Prize laureate in economics, proposed in 1998 an international currency based on the SDR, the INTOR, comprising 50% of gold and a basket of paper currencies (chart #2). 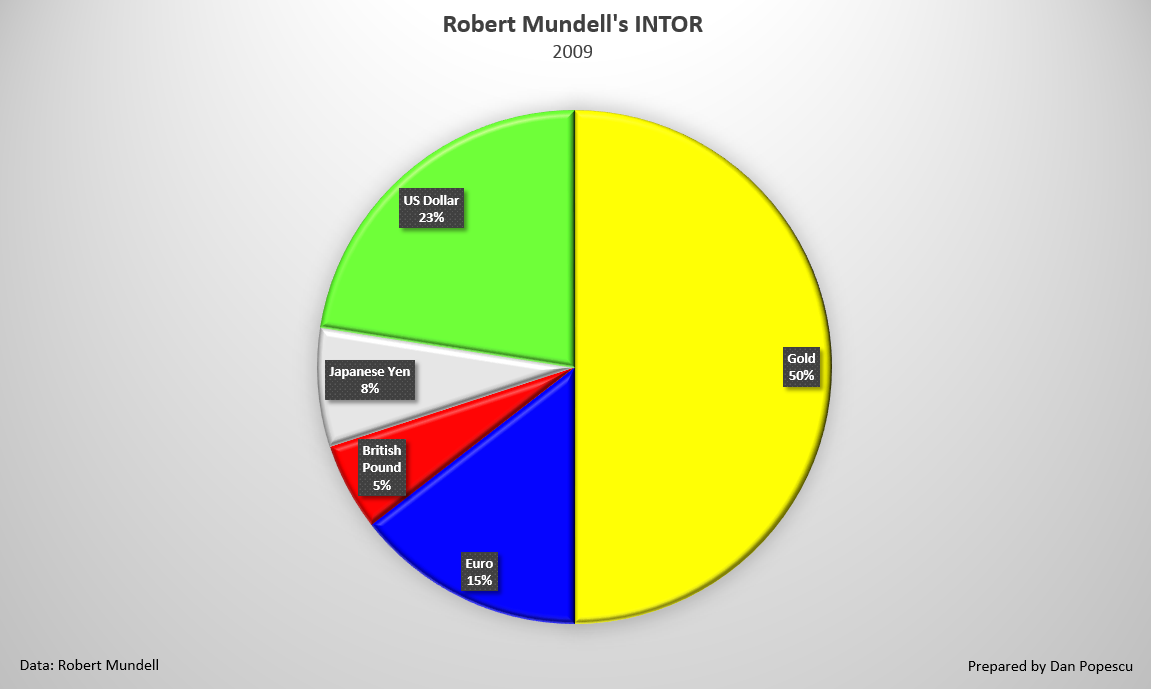 Dubai’s International Financial Center (DIFC) has proposed one in a paper published in 2010 called the “hard” SDR (chart #3). It includes the Yuan but also other currencies and 20% gold. However, in a paper published in April 2011, Lord Desai says, “From what we were told about the SDRs, the idea that gold could be added to the four currencies currently comprising the SDR is legally a non-starter. Since SDRs are everyone’s liability, and gold is not part of any currency’s base, gold cannot be made part of SDRs as it cannot be collected when some country presents SDRs to a Central Bank.” However, in a speech delivered at the recent Dubai Precious Metals Conference 2015, Lord Desai stated, “Right now the SDR only considers the major currencies of the world — dollar, sterling, euro and yen — but if you were to add gold to it, that would actually stabilize and reduce volatility in the SDR that it is in right now.” 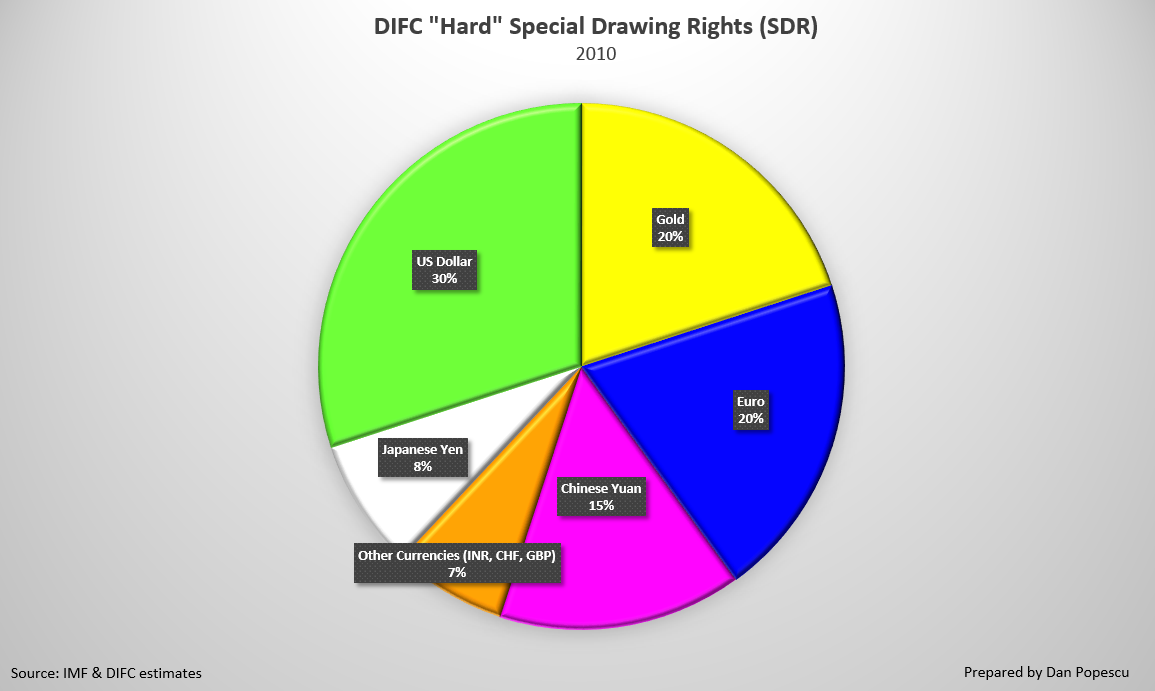 In the following chart (chart #4), we can see the present composition of the IMF’s global official foreign exchange reserves besides gold. As you can observe, the US dollar dominates with 63%, followed by the euro with 22%. Today, less than 1% of global reserves are held in China’s Yuan. 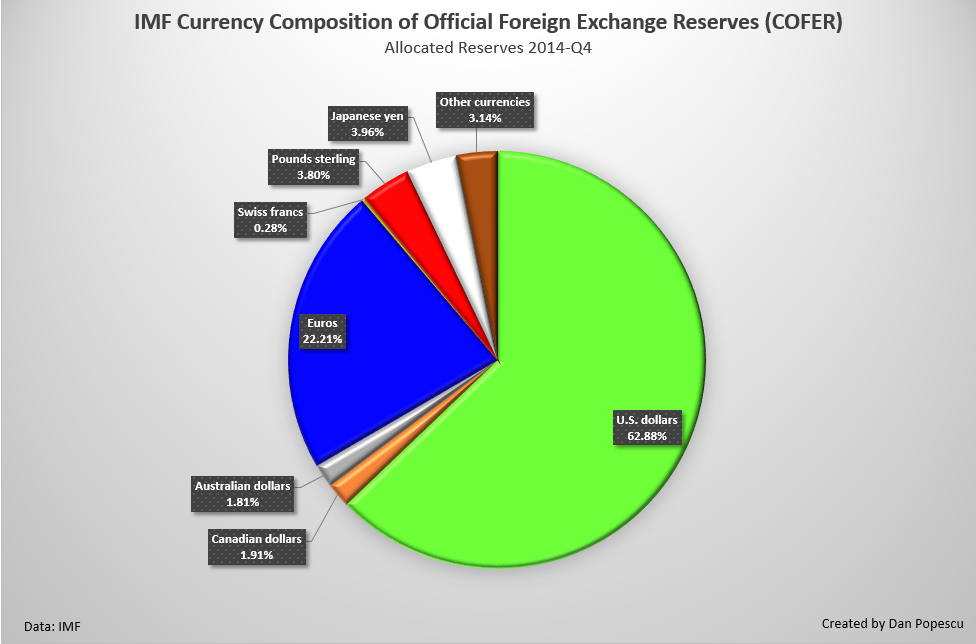 In 2014, according to the global payment system SWIFT, global payments in China’s Yuan represented only 2.2% versus the US dollar’s 44.6% and the euro’s 28%. 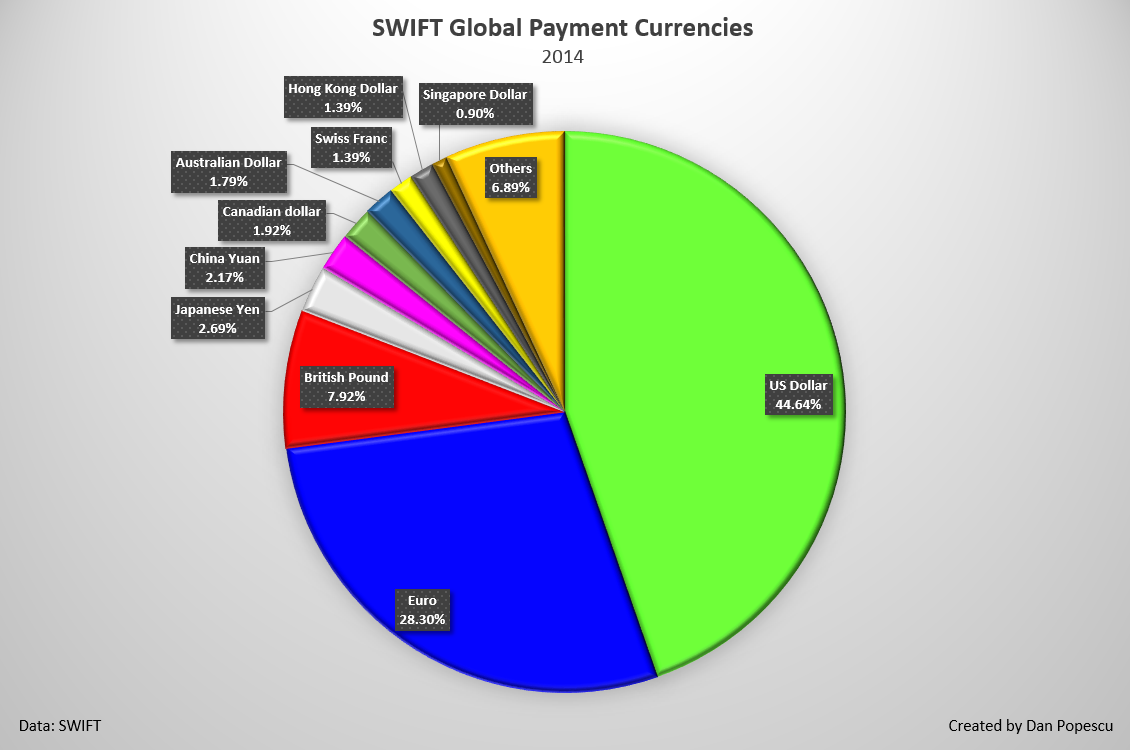 However, if we look at the world gross domestic product (GDP), we can see that the countries’ currencies included in the SDRs only represented 35% of the global GDP in 2014.

If China’s Yuan were to be included it would represent just a little bit more than 50% of global GDP. For the moment, there is no information that any other currency will be considered at the next revision in the fall of 2015. Including all the BRICS countries would bring the percentage to 65% of global GDP. 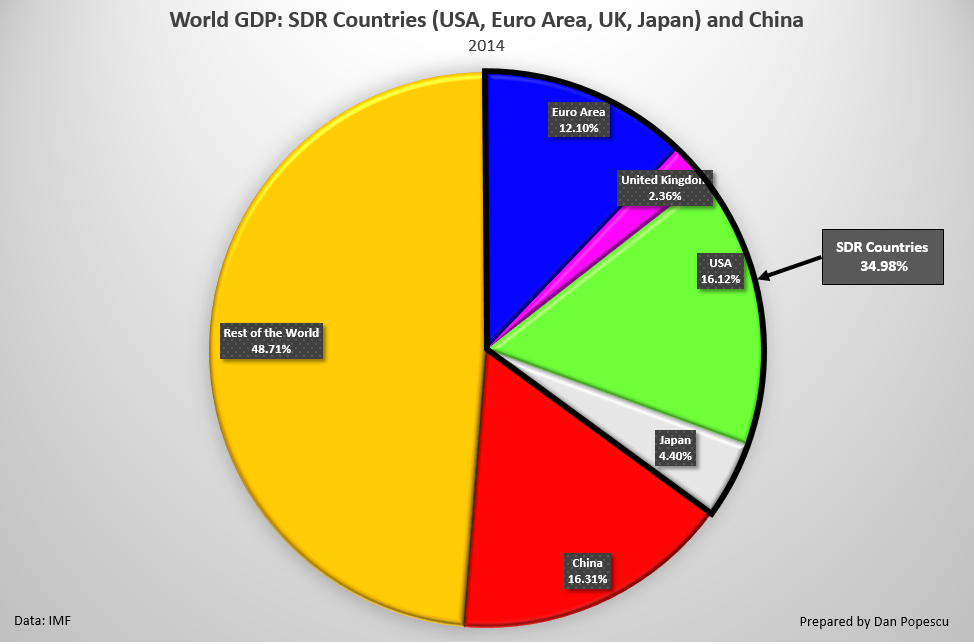 Using SWIFT data for 2014, I created a hypothetical SDR that only adds the Chinese Yuan in the SDR just to give you an idea of how it would look like. 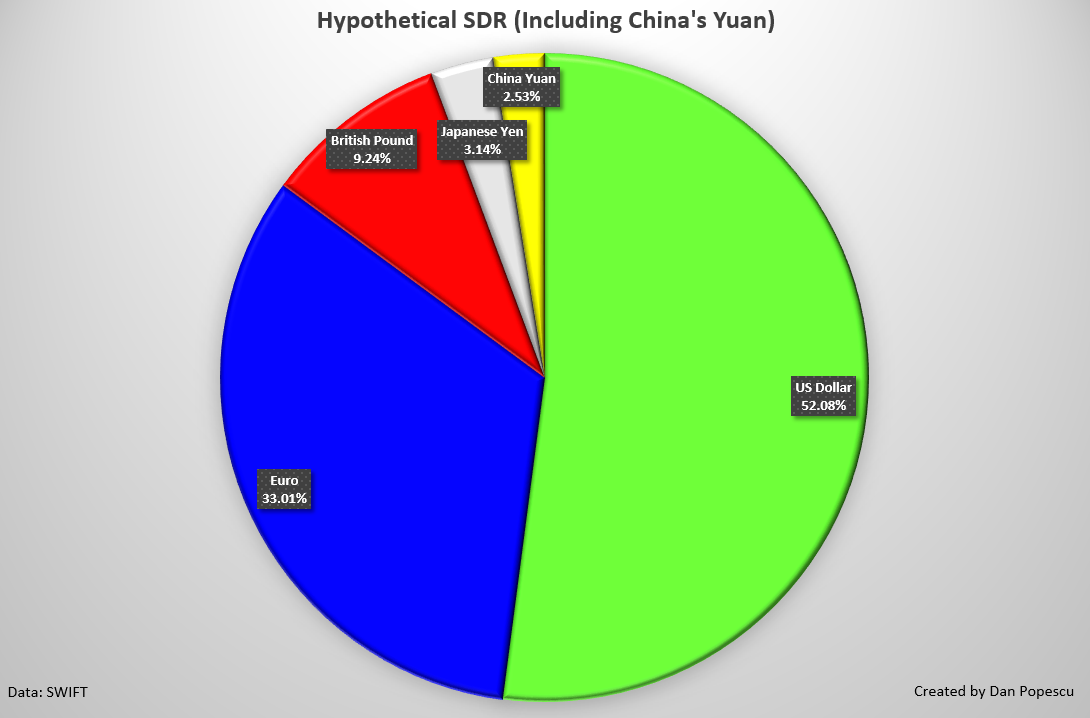 The chart below (chart #8) of gold priced in SDR shows that the SDR has lost value against gold since the collapse of the Bretton Woods system in 1973. We can go even further and say that all fiat currencies, since their introduction some one hundred years ago, have lost close to 98% of their value (the SDR is just a basket of the four major fiat currencies).

Chart #8: Gold vs SDR and Gold priced in SDR 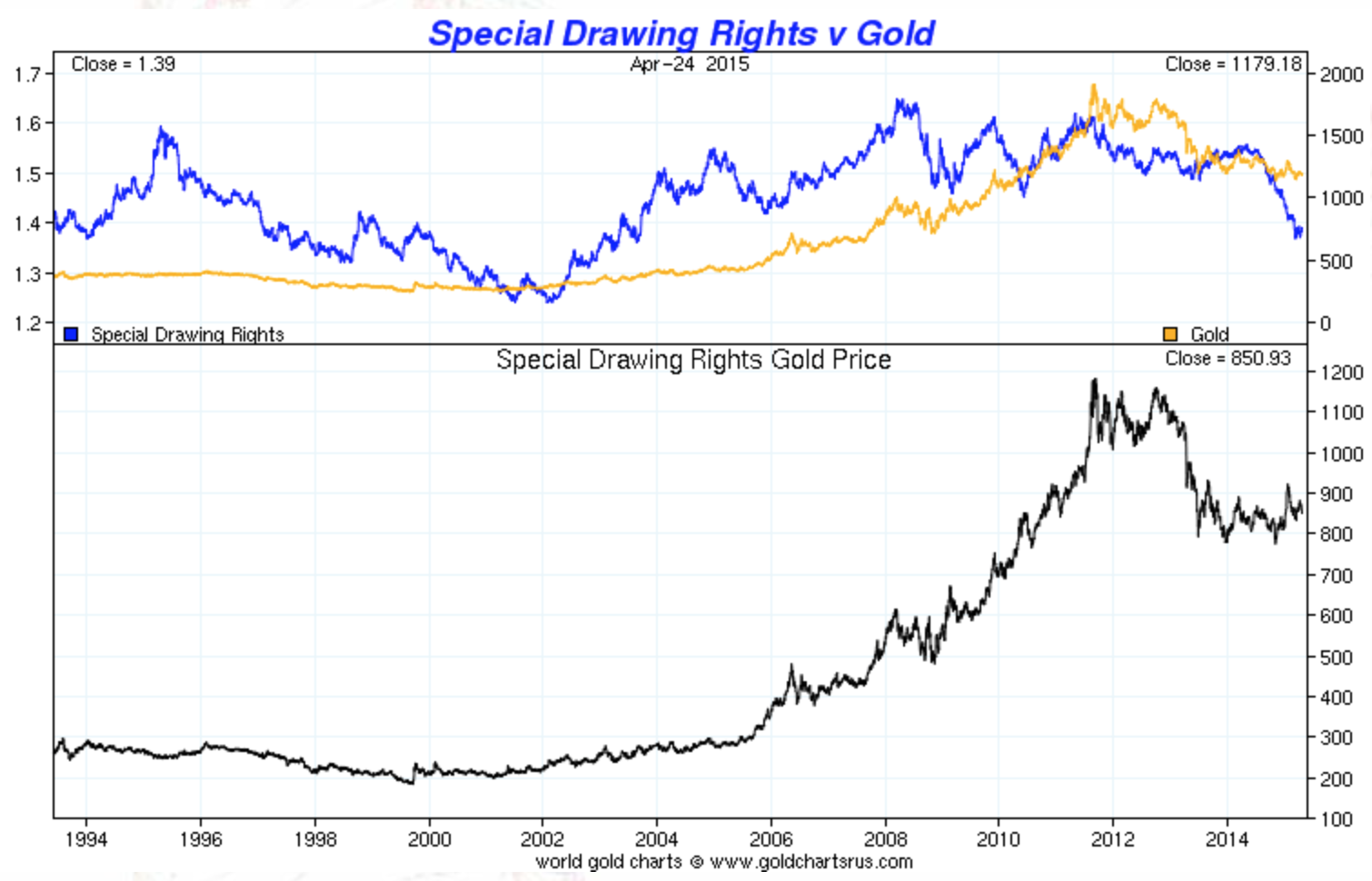 We know there is a review going on right now of the SDR, but we don’t know which version will be adopted. Will it only add China’s Yuan? Will Russia, India and Brazil agree with it, or will they ask for their currencies to be considered also? Could gold also be part of some form of the SDR?

Remember that China’s Yuan is presently pegged to the US dollar, so it would make no sense to include it into the SDR before it is un-pegged. Lawrence Williams, in a recent article, says, “The possible inclusion of the Yuan in a revised SDR and the un-pegging of the Yuan from the dollar are all inextricably linked and the countdown to this is already under way.” I would add that the update of China’s gold reserves is also linked to the un-pegging and SDR’s inclusion of the Yuan.

What will be the reaction of the U.S.? Any straying away from the present “exorbitant privilege” of the dollar will not be accepted easily in the U.S. We already see how hard it is to get a vote on the IMF in the U.S. The close U.S. election will make it harder, if not impossible, to get any pro-reform of the SDR vote passed before the election. Even in normal times, the U.S. approach has always been ‘My way or no way’. Can and will the world go alone and reset the SDR, leaving the U.S. isolated? It happened before. Remember that the U.S. is still not on the international metric system of units (MKS). At least not officially. In reality, the American scientific community has adopted the metric system a long time ago.

China certainly has a long-term strategy and a short one. It seems the immediate one is to get the Yuan included this year into the SDR and sign as many agreements as possible to use the Yuan in international trade, rather than the US dollar. Longer term it wants to get the Yuan backed by as much gold as the US dollar and the euro are. China wants to destroy the “exorbitant privilege” of the US dollar, making the dollar just another currency. This explains the massive buying of gold by China, especially since 2008. An announcement of China’s official gold reserves is expected at the same time as the inclusion of the Yuan in the SDR, sometime in the fall of 2015.

A major financial crisis that is expected soon could derail China’s strategy and collapse the present system before a system based on the new SDR is being approved. Still, the large accumulation of gold will put China in a very strong negotiating position. The success of the new Asian Infrastructure Investment Bank (AIIB) (figure #9), against strong opposition by the U.S., indicates that China is positioning itself to counteract any U.S. veto on the IMF reforms. Until now, the U.S. has used delaying tactics but the official request by Chine to include the Yuan in the SDR indicates China is becoming impatient and is not willing to wait any longer. 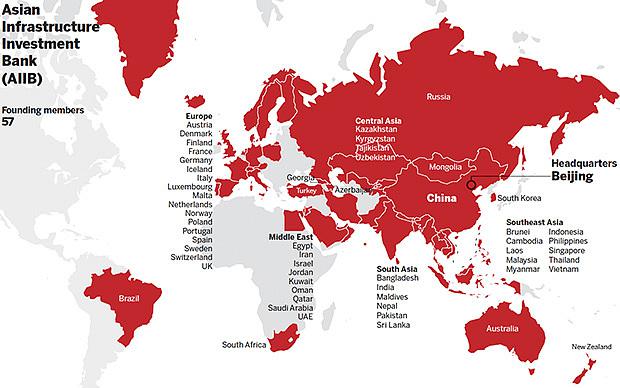 Gold has been and still is a de facto currency of last resort. When everything else fails gold shines again. In addition, both China and Russia are preparing themselves for the possible collapse of the present monetary system by buying as much gold as possible. A solution that could come out of a collapse would be a true gold standard.

As far as I am concerned, I cannot conceive, just like General de Gaulle, president of France (in his 1965 speech, at the end of the “gold exchange standard”), that “there might be any criterion, or standard, other than gold. Yes! gold, that is never altered, that can be made into bars, ingots or coins, that has no nationality, that has been held, eternally and universally, as the most excellent unalterable and fiduciary value”. It would also reconnect the international monetary system back with the real world.

An update of the SDR is not a durable solution. It will only postpone the inevitable collapse of the present international monetary system based on fiat. It is always easier to get a consensus to print more SDRs than to cut expenses; therefore I expect the same problems we have now with the dollar to remain and even worsen with a fiat SDR. 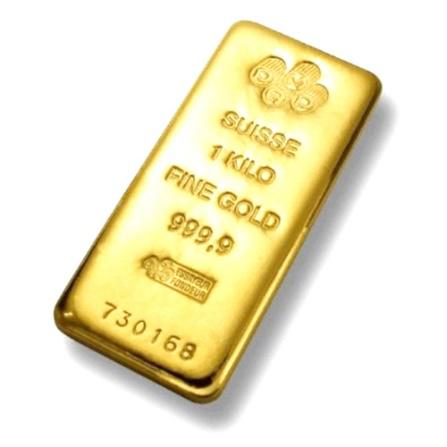 “The main thing we miss today is universal money, a standard of value, the link between the past and the future and the cement linking remote parts of the human race to one another.” Robert Mundell (2)

(1) OMFIF, Gold, the renminbi and the multi-currency reserve system