At the end of major economic cycles, shortages develop in all areas of the economy. And this is what the world is experiencing today on a global basis. There is a general lack of labour, whether it is restaurant staff, truck drivers or medical personnel.

Everything is of course blamed on Covid but most of these shortages are due to structural problems. We have today a global system which cannot cope with the tiniest imbalances in the supply chain.

Just one small component missing could change history as the nursery rhyme below explains:

The world is not just vulnerable to shortages of goods and services.

There is a high likelihood that not just one of the above will happen in the next few years but all of them.

Because this is how empires and economic bubbles end.

The Roman Empire needed 500,000 troops to control its vast empire. 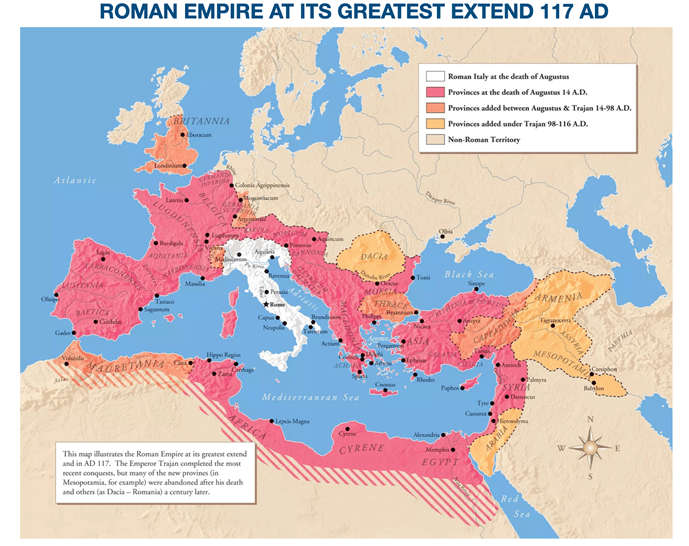 Emperor Septimius Severus (200 AD) advised his sons to “Enrich the troops with gold but no one else”.

As costs and taxes soared, Rome resorted to the same trick that every single government resorts to when they overextend and money runs out – Currency Debasement.

And in those days, the soldiers were shrewd and demanded payment in gold coins and not debased silver coins.

Although the US is not officially in military conflict with any country, there are still 173,000 US troops in 159 countries with 750 bases in 80 countries. The US spends 11% of the budget or $730 billion on military costs. 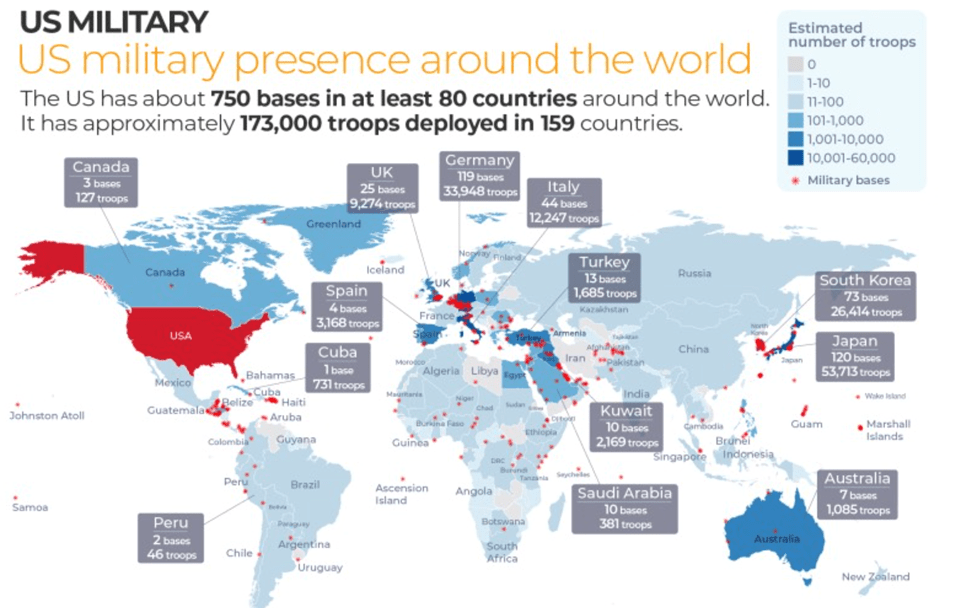 Since the start of the US involvement in Afghanistan, Pentagon has spent a total of $14 trillion, 35-50% of which going to defence contractors.

US HOPELESSLY BANKRUPT – NEEDS TO BORROW 46% OF BUDGET

The US annual Federal Spending is $7 trillion and the revenues are $3.8 trillion.

So the US spends $3.2 trillion more every year than it earns in tax revenues. Thus, in order to “balance” the budget, the declining US empire must borrow or print 46% of its total spending.

Not even the Roman Empire, with its military might, would have got away with borrowing or printing half of its expenditure.

And when, like in the case of the US, you spend almost twice as much as you earn that is TOTAL MISERY.

Neither an individual, nor a country can spend 100% more than their earnings without serious consequences. I have written many articles about these consequences and how to survive the Everything Bubble

The most obvious course of events is continuous shortages combined with prices of goods and services going up rapidly. I remember it well in the 1970s how for example oil prices trebled between 1974 and 1975 from $3 to $10 and by 1980 had gone up 10x to $40.

The same is happening now all over the world.

That puts Central banks between a Rock and a Hard place as inflation is coming from all parts of the economy and is NOT TRANSITORY!

Real inflation is today 13.5% as the chart below shows, based on how inflation was calculated in the 1980s 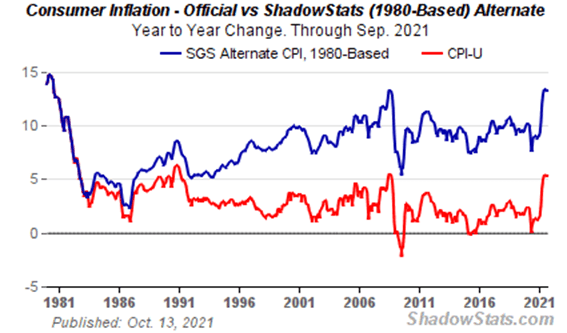 The central bankers can either squash the chronic inflation by tapering and at the same time create a liquidity squeeze that will totally kill an economy in constant need of stimulus. Or they can continue to print unlimited amounts of worthless fiat money whether it is paper or digital dollars.

If central banks starve the economy of liquidity or flood it, the result will be disastrous. Whether the financial system dies from an implosion or an explosion is really irrelevant. Both will lead to total misery.

Their choice is obvious since they would never dare to starve an economy craving for poisonous potions of stimulus.

History tells us that central banks will do the only thing they know in these circumstances which is to push the inflation accelerator pedal to the bottom.

Based of the Austrian economics definition, we have had chronic inflation for years as increases in money supply is what creates inflation. Still, it has not been the normal consumer inflation but asset inflation which has benefitted a small elite greatly and starved the masses of an increase standard of living.

As the elite amassed incredible wealth, the masses just had more debts.

So what we are now seeing is the beginning of a chronic consumer inflation that most of the world hasn’t experienced for decades.

THE INEVITABLE CONSEQUENCES OF CURRENCY DESTRUCTION

This is the inevitable consequence of the destruction of money through unlimited printing until it reaches its the intrinsic value of Zero. Since the dollar has already lost 98% of its purchasing power since 1971, there is a mere 2% fall before it reaches zero. But we must remember that the fall will be 100% from the current level.

As the value of money is likely to be destroyed in the next 5-10 years, wealth preservation is critical. For individuals who want to protect themselves from total loss as fiat money dies, one or several gold coins are needed.

So back to the nursery rhyme:

Gold is not the only solution to the coming problems in the world economy. Still, it will protect you from the coming economic crisis like it has done every time in history

And remember that if you don’t hold properly stored gold you don’t understand: 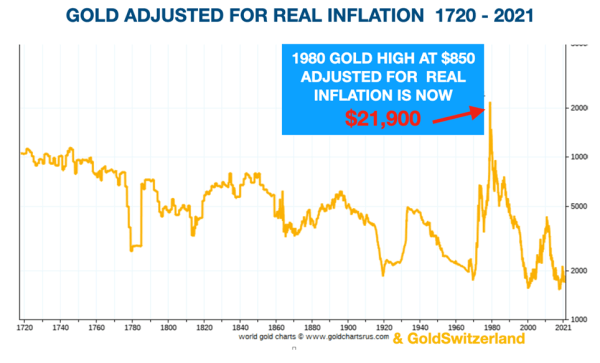 So gold at $1,800 today is grossly undervalued and unloved and likely to soon reflect the true value of the dollar.