Switzerland and Gold: What Next? 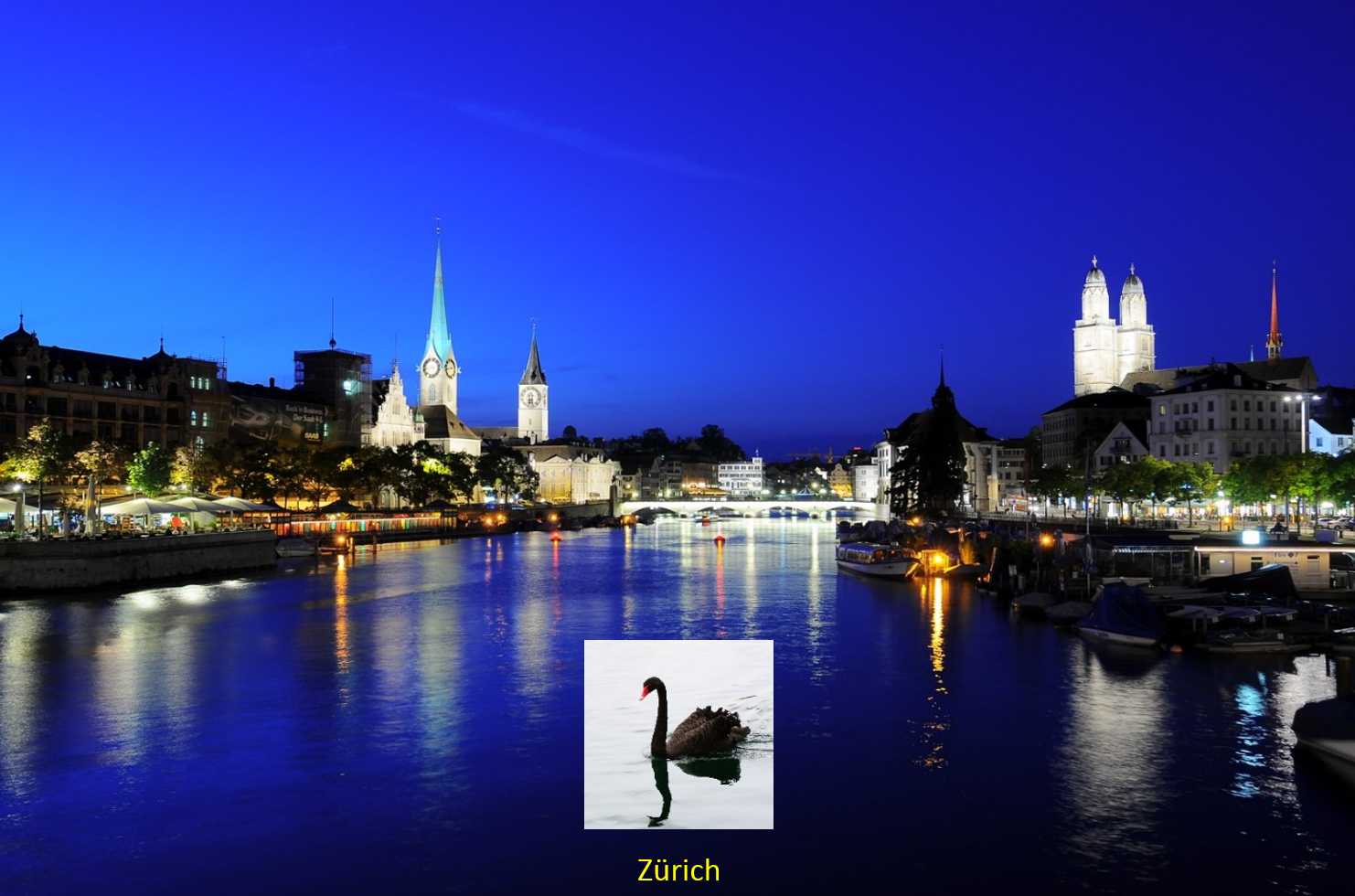 “Money is sound when it fulfils its functions as a means of payment and store of value as smoothly and reliably as possible in people's everyday lives. Sound money retains its value and is generally accepted. It also makes an important contribution to social harmony and material prosperity. Sound money is therefore a central pillar of our [Swiss] society. The mandate of monetary policy is to ensure that money remains sound. Consequently, the Swiss National Bank (SNB) bases all of its activities on this mandate.” Thomas Jordan, Chairman of the Governing Board of the Swiss National Bank, Nov. 23, 2014 just before the Gold Referendum on Nov. 30, 2014

I expected a positive outcome in the Swiss Gold Referendum (Nov. 2014) to create a tsunami in the gold and foreign exchange markets but didn’t expect the tsunami created by the unpegging of the Swiss franc (Jan. 2015); especially after the absolute assurances given by the Swiss National Bank (SNB) during the referendum campaign. If the negative vote in the Swiss gold initiative was not a surprise, the de-pegging of the Swiss franc only a month and a half later was. How can we explain such a reversal so short after a campaign by the SNB against gold? We must remember that during the referendum campaign the SNB and its president strongly defended the peg and promised it will continue. I expected the Swiss Gold Referendum to be the big shock in the central bank sector and the gold market, but only if passed and it didn’t. However, the consequences of the initiative, I am sure, helped prepare the “big surprise” event that was the lifting of the cap by the SNB just a month and a half later. The strong support for the initiative scared the banking industry and the SNB and, even though defeated, I think it affected in some way the central bank. It was a message from the people.

Was the de-pegging really so unexpected? Or was the timing of the de-pegging the only surprise? Several analyst were saying repeatedly that the peg was unsustainable and that its end was just a matter of time. Still according to Minyanville “The EURCHF fell about 16% in today's trading [Jan. 15, 2015]. To put things into perspective, depending upon the historical range, that is at least a 35 standard deviation event. In terms of the probability of seeing such an event, a 25 standard deviation event is likely about once every 100,000 years”. What did change in such a short time to make the SNB change its mind and surprise in such a way the foreign exchange markets? I personally don’t see any valid argument just excuses. In my opinion, it just proves that those in charge of the central banks have no idea of what they are doing. Some even admit it in private conversations and others even hint it publicly with words like “we are in unchartered territory” and “we learn by doing”. Remember that before becoming president of the SNB, Thomas Jordan wrote a paper in 1999 on “Why Switzerland should never peg to the Euro” then doing the opposite once president of the SNB, and reversing again in a surprise move that shocked the global foreign exchange markets. Not only that but it also started a chain reaction of devaluations and interest rate drops by central banks worldwide. Currency wars at its best? I certainly think so. If the Swiss did not shock the global central bankers with the gold initiative, the de-pegging of the franc certainly did. 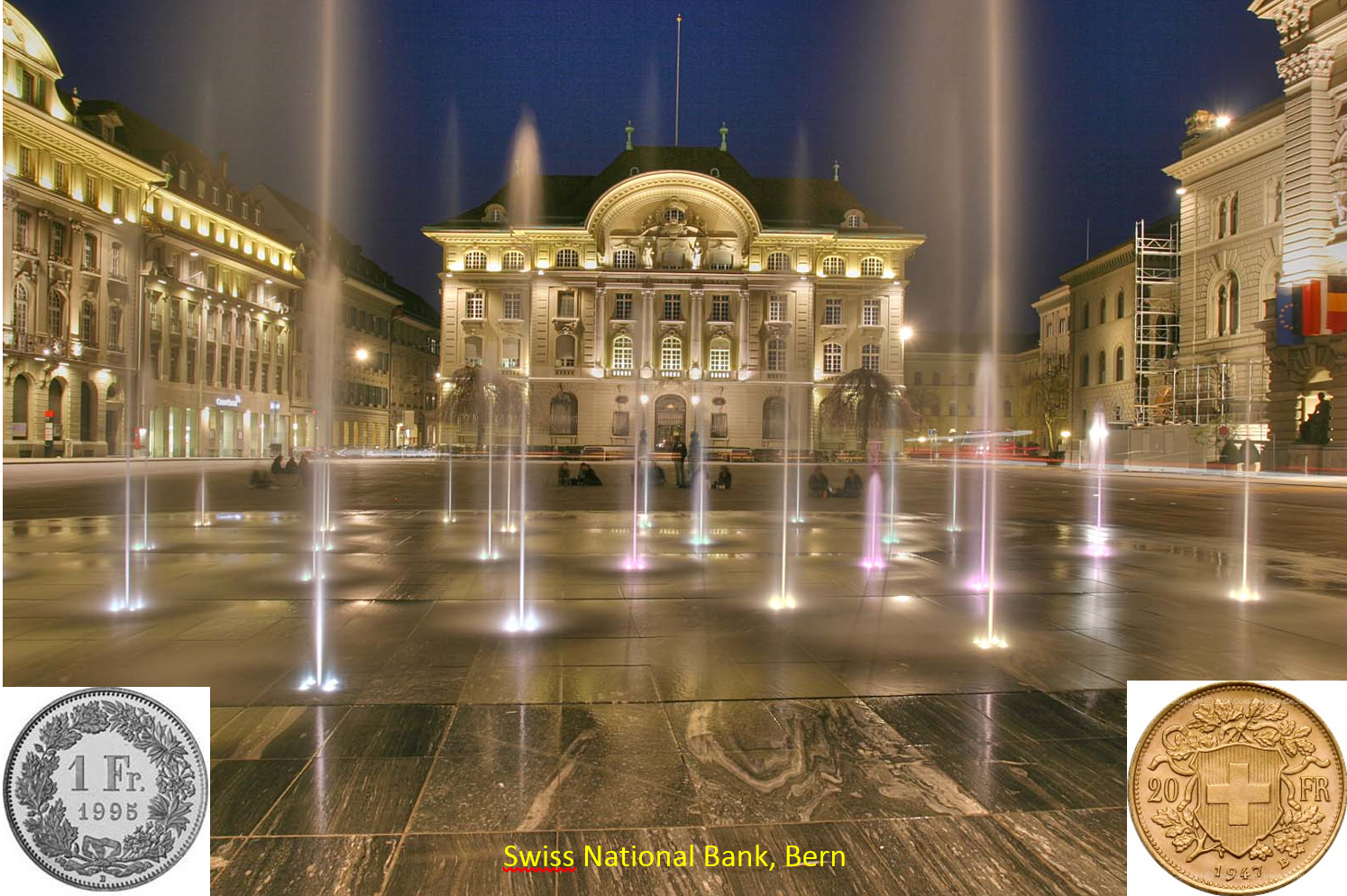 Can we expect another surprise from the Swiss? I think we can. We already see a dissatisfaction of the Swiss government with the Swiss central bank and a demand for more consultation between the government and the SNB’s executive. If Mr. Jordan was capable to do a 180° turn on the euro peg, he can definitely do it also on the issue of gold. That is, if he doesn’t retire first (pushed out or voluntarily).

I wrote long before the referendum in April 2014 in an article “Switzerland’s Role in the Gold Market” how important gold is in the Swiss economy and therefore how knowledgeable the Swiss are about gold. From the refining process in the canton of Ticino, world central banking gold trading at BIS in Basel, international transportation of gold, safekeeping vaults in Zurich and Geneva, and the jewelry fabrication in Geneva, the Swiss still dominate the gold market worldwide. It remains that the Swiss banking industry and the SNB both became in the recent years excessively Americanized and therefore excessively anti gold. It was evident recently in the television debates during the referendum campaign. In the 60s Swiss banker advocated a 10% gold allocation in a portfolio.

In a more recent article and a review of the Swiss gold referendum “Gold and Switzerland After the Referendum” I mentioned that I did not think this is the end. Other popular initiatives will come up in favor of gold. What makes the Swiss so attracted to gold? The Swiss have always had a preference of lean, stable and good government and stable currency and often turn down through referendums expensive government initiatives and wasteful expenses. Sound money is a central pillar of Swiss society. That’s why people and foreign governments are eager to store their wealth in Switzerland pushing up the Swiss franc. Already in the 1970s, during the dollar crisis that forced President Nixon to end convertibility of the dollar in gold, a run into the Swiss franc forced the government to introduce a tax on bank deposits in Swiss francs by foreigners. At that time, the Swiss franc was backed by gold through a 40% gold reserve requirement that was anchored into the constitution. Switzerland still is 5th out of the 20th largest official holders (excluding the IMF) of gold reserves with 1,040 tonnes. However, in order to maintain the euro peg the SNB has bought very large amounts of foreign currencies (mostly euro) decreasing on a percentage bases the gold portion of foreign exchange reserves to just 7.7%. 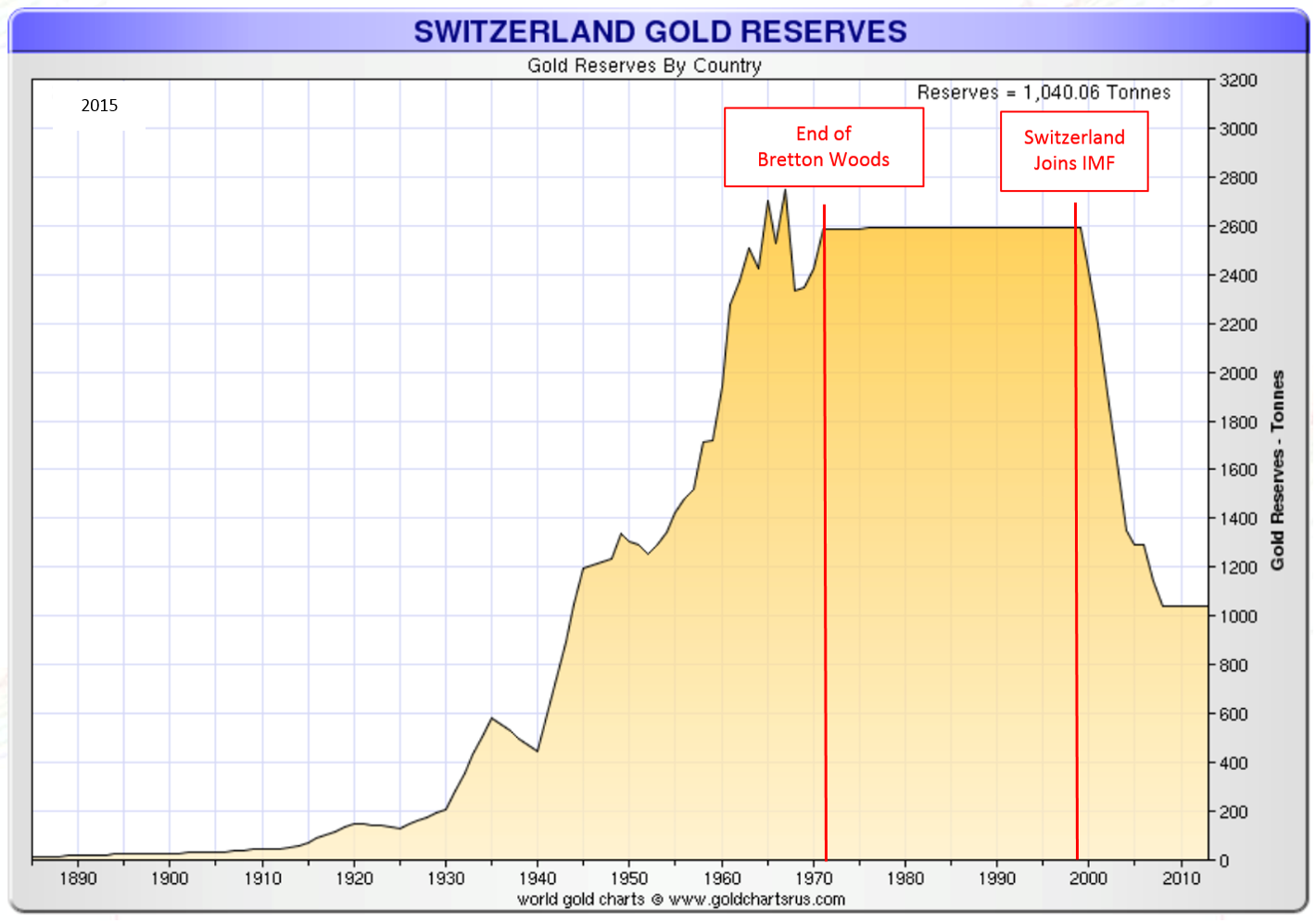 According to Ferdinand Lips in his famous book Gold Wars: “By 1968 the Swiss had captured an estimated 80% of the world’s physical market”. Since the end of the 1990s under US and IMF pressure, the trend reversed. 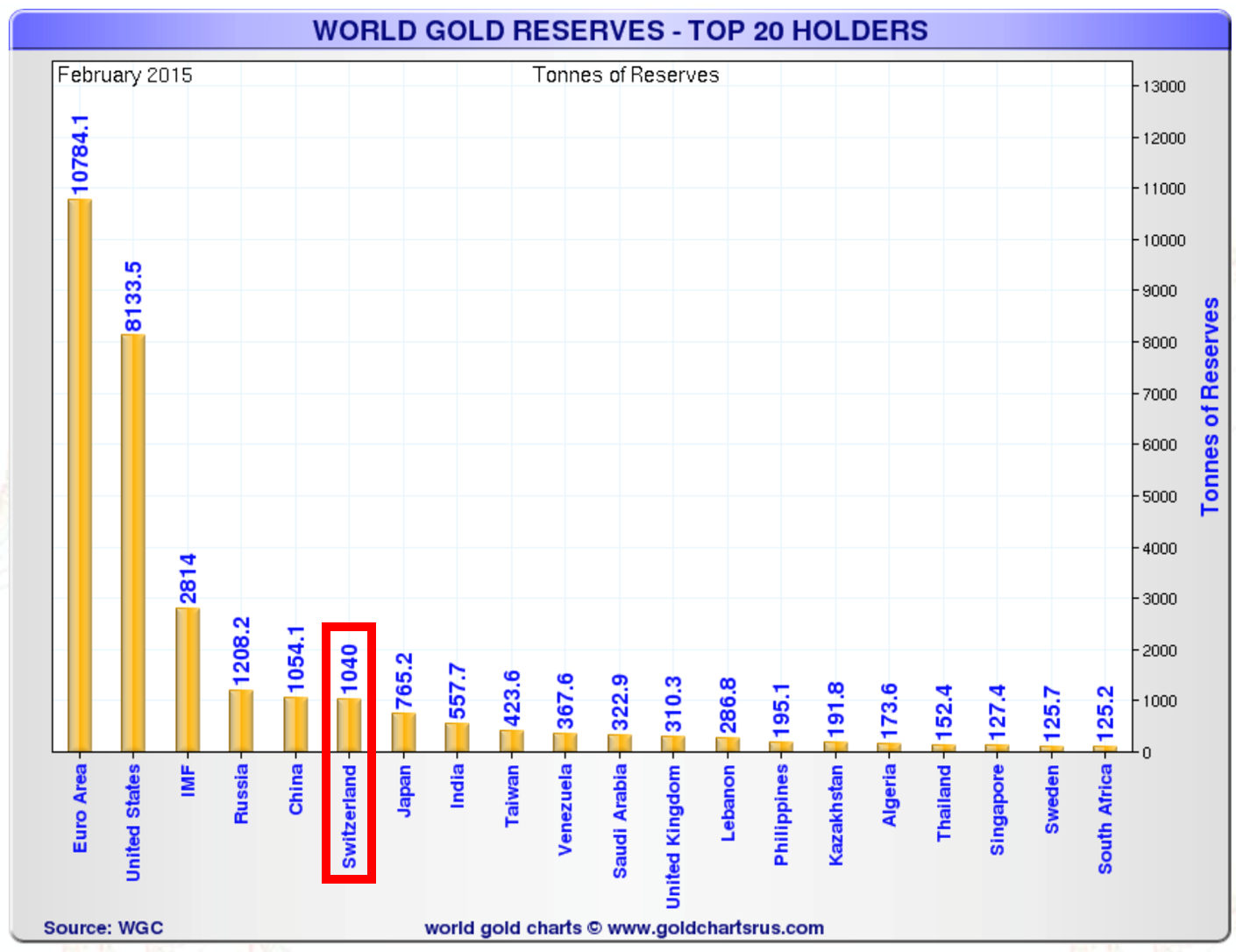 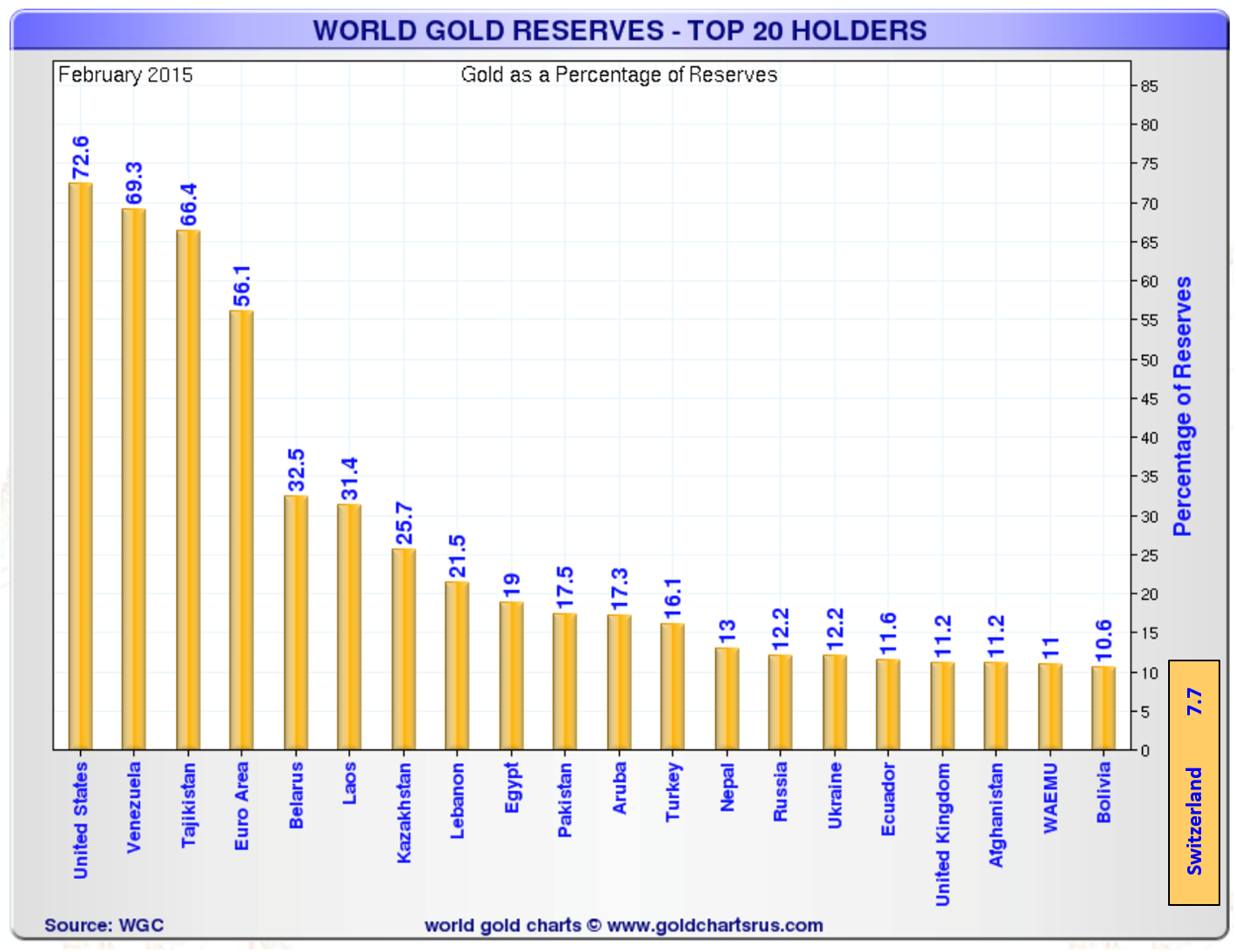 SNB lied to the Swiss people about the franc peg during the gold referendum the same way US president Franklin D. Roosevelt lied about the $20 dollar peg when he seized gold in 1933 in the US. Since they did a surprise shift that shocked the financial world once, they can do it again. However, this time I think it would be in favor of gold. The massive printing of fiat worldwide shows already that it didn’t help the global economy; it just barely kept it alive and postponed the inevitable. Because of the conservative approach to money by the Swiss, I will not be surprise of a sudden change in attitude towards gold by the Swiss people, government and the central bank. The affinity with the gold market is there deeply anchored into the Swiss tradition. It wouldn’t even require a referendum if there is a shift in attitude in the Swiss National Bank; certainly under public opinion and political pressure.

In its most recent CPM Gold Yearbook 2015, CPM Group remarks that more gold enters Switzerland than leaves. They correctly point out that most commentators focus on the flow of gold into China and India ignoring the astounding increase in gold holdings in Switzerland. Switzerland, they say has been a major trading and storage site for gold for centuries and it continues to be. This week Thomson Reuters’ Gold Survey 2015 also allocates a paragraph to Swiss gold imports/exports. Periods of large increases of gold imports into Switzerland (see chart below) correspond with periods of monetary crisis like 1973 (collapse of Bretton Woods) and 2008 (global financial crisis). As the gold market is very opaque it is very hard to know or estimate the amount of gold flowing into Switzerland, especially in physical form and going into vault companies or private safe deposit boxes. More and more people also avoid gold deposits into the banking system. 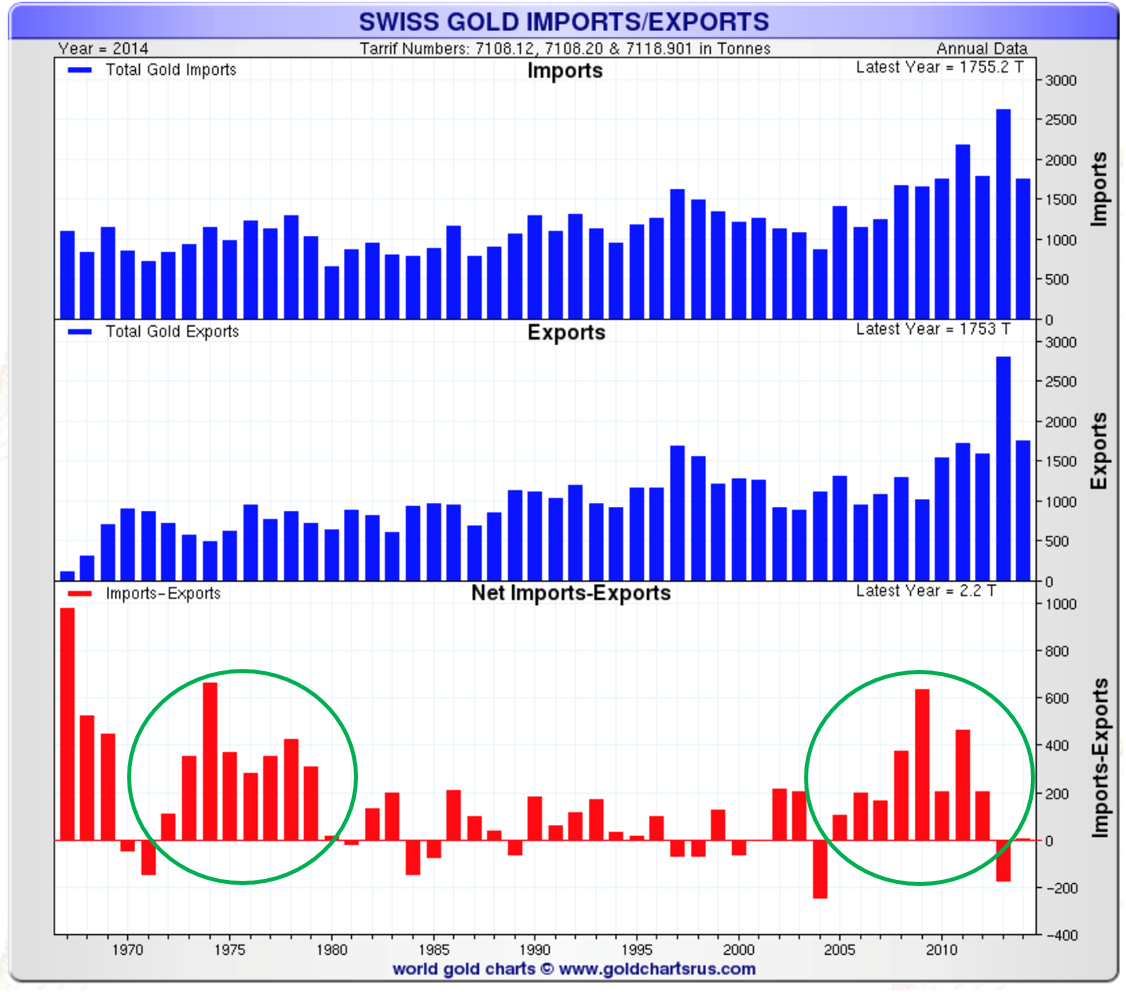 In conclusion, it is my view that you shouldn’t ignore Switzerland in analyzing the gold market. As we have seen, even though Switzerland is a very small country it plays a major role in the gold and foreign exchange markets and can create a shock with a very large impact that some call loosely a “black swan” event. Since interest rates have gone negative also in Switzerland, more and more individuals but also pension funds are looking (for now very discretely) into depositing cash and gold in vaults outside the banking system in order to save fees. One pension fund manager estimated recently saving 25,000 francs on a 10,000,000 francs deposit.

I do expect some kind of a surprise event coming again this year either/or both from Switzerland and China that will shock and affect the gold market. 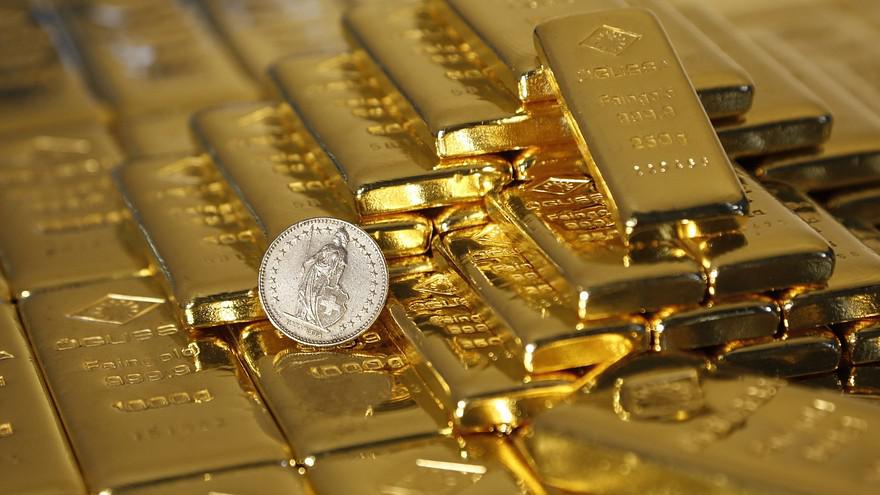 Price of Gold in Swiss Francs per Once 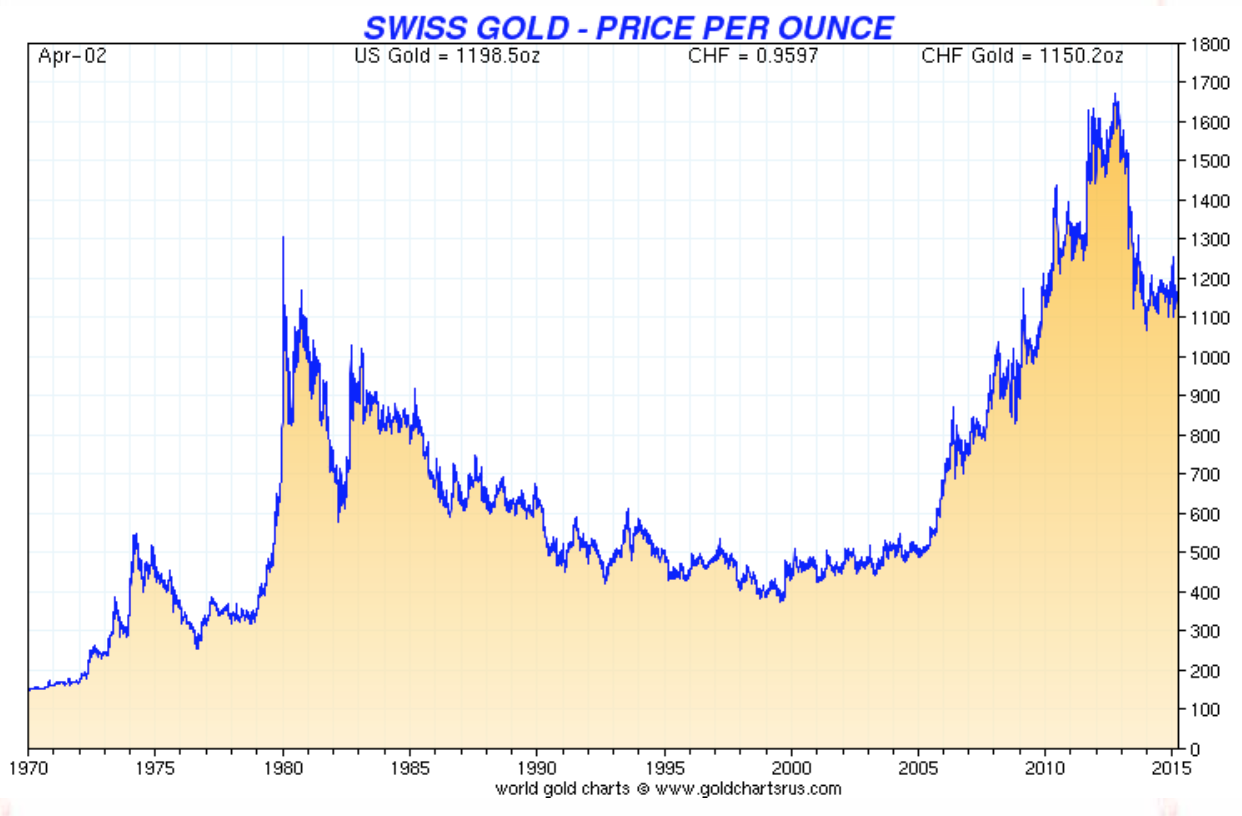 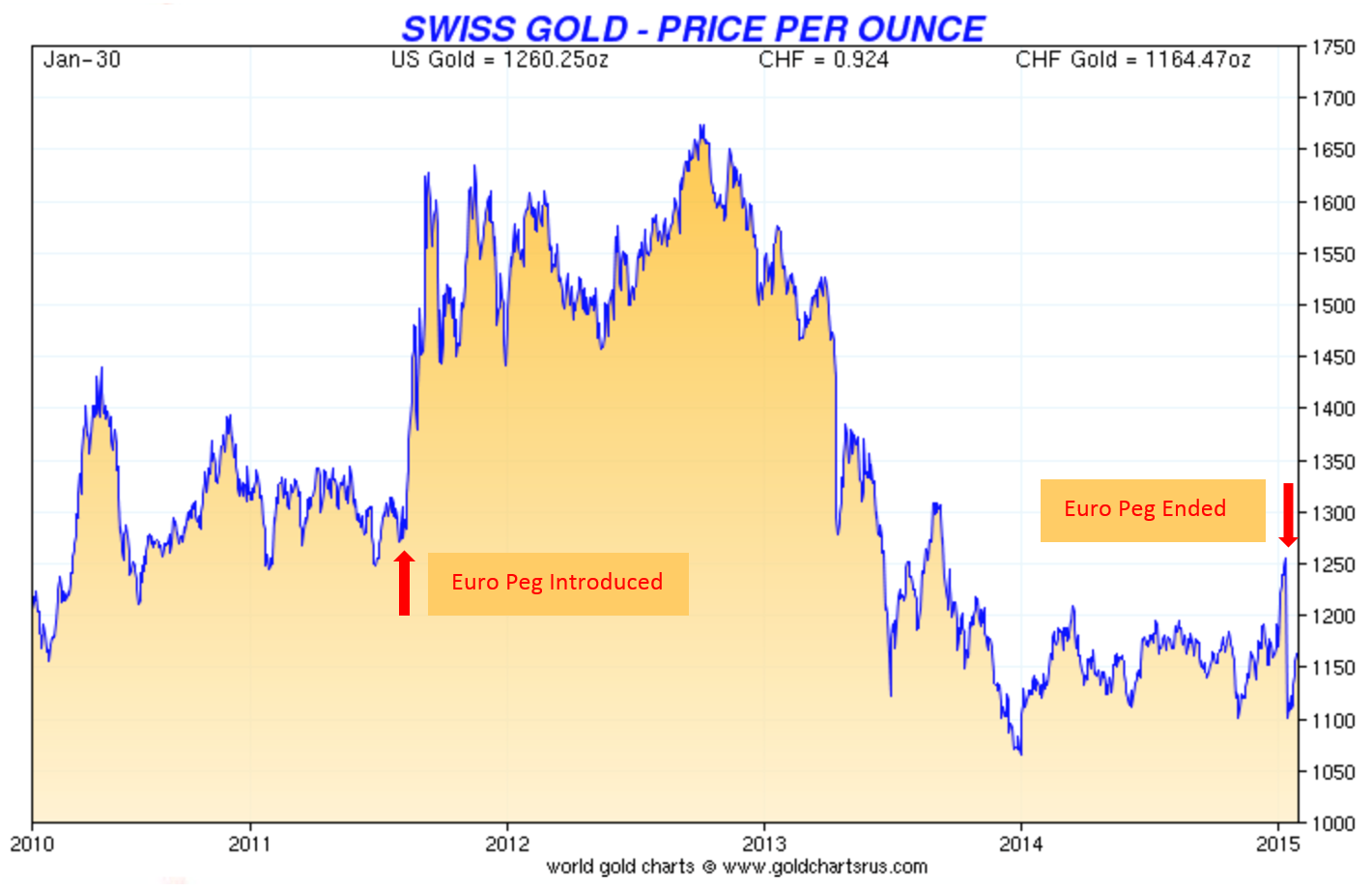 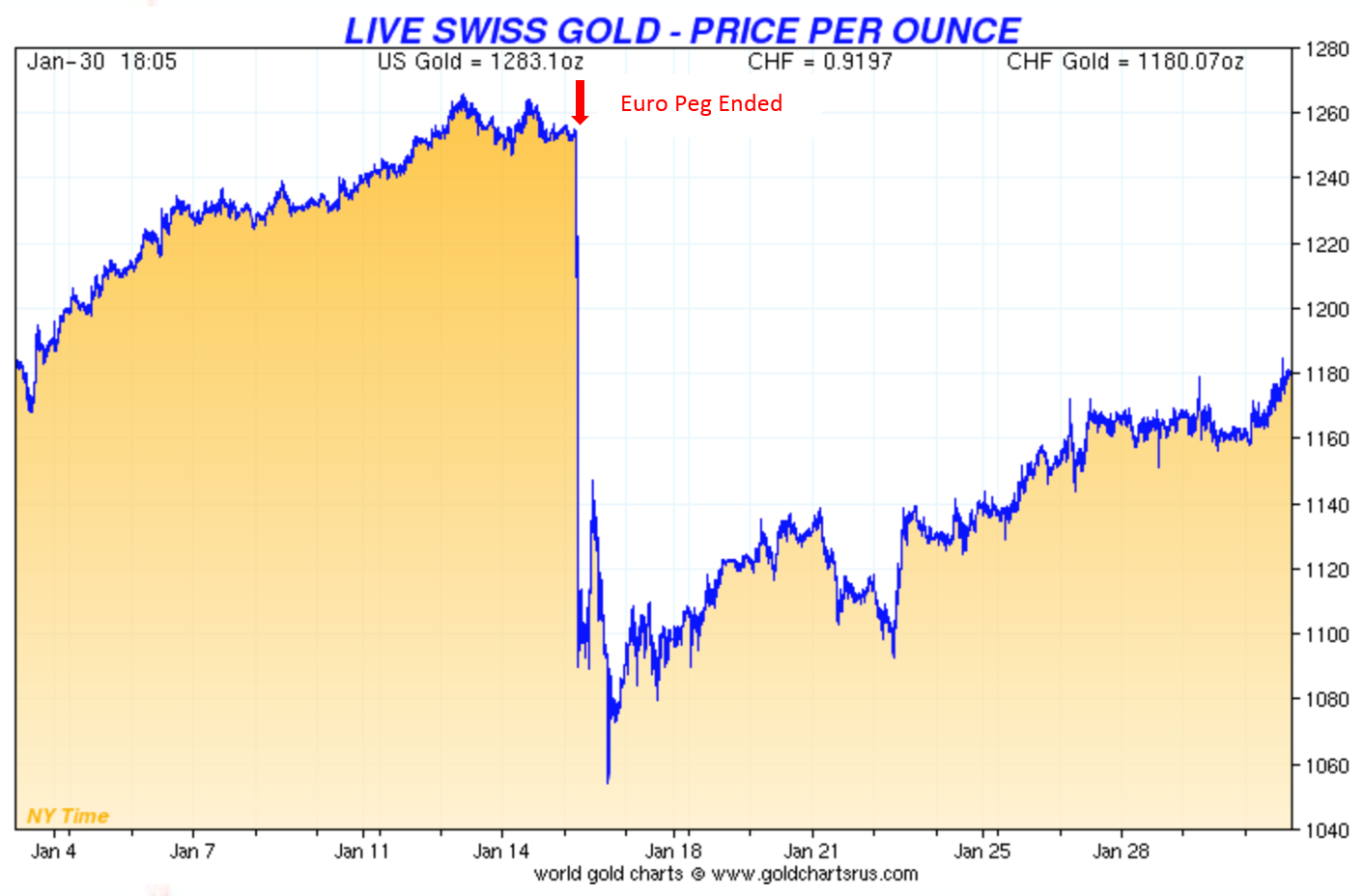