What could possibly restart inflation? This is THE question that financial market participants, major investors, monetary authorities, and basic savers are asking themselves. Because once inflation returns, zero interest rates would be over and the entire financial landscape would change radically: the mountain of public and private debt would shake on its foundations, banks and insurers would see the value of their treasury bills plummet, stocks would suffer, bubbles-real estate or otherwise-would risk bursting, etc.

Where could inflation come from? From the deluge of central bank liquidity? Assets were rising (stocks, real estate, art), but not consumer goods- certainly because of the strong international competition that keeps prices low. A rise in wages? The unemployment rate is certainly at a low point in most European countries, but the jobs created are partly precarious, so the fear of losing them does not encourage people to demand an increase in wages.

Since history does not always repeat itself in the same way, we must ask ourselves about a new cause. We believe that the transmission channel for inflation could be energy, for two fundamental reasons:

- Energy is a "real" tangible asset, and those who hold it may fear that the central bank's printing plate will make the currency lose value. To protect themselves, they raise their prices. We know this process. It makes it possible to understand the rise in prices from the beginning of the century, when the Fed lowered its interest rate, and from 2010 to 2015, when the Fed and the ECB ran their EQs at full throttle.

- But a new mechanism is emerging: the fight against global warming will considerably increase the cost of energy. 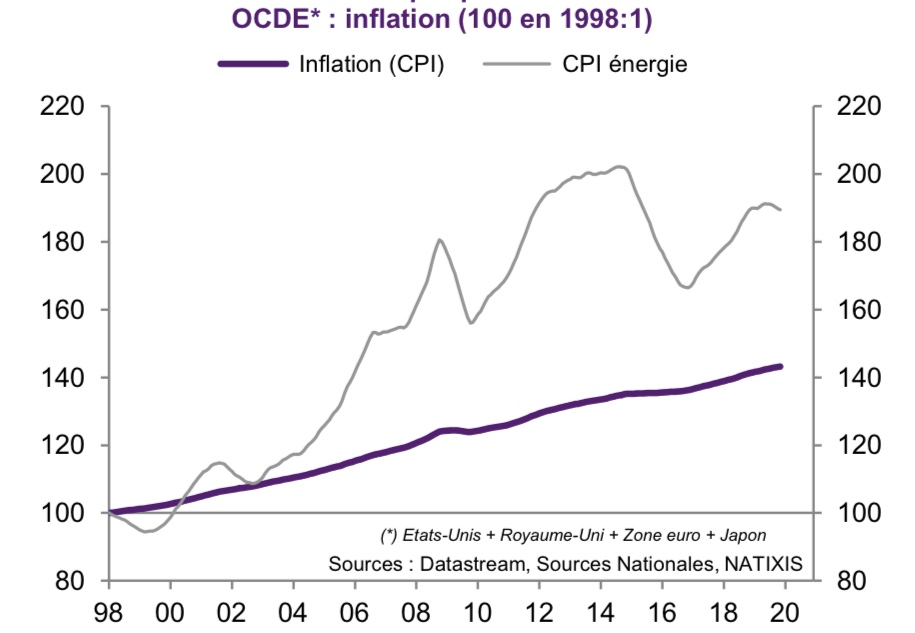 Indeed, hundreds of billions of euros are being invested in the "energy transition" by European countries, while Ursula von der Leyen, the President of the European Commission, wants a "green deal" of 1 trillion euros over the next ten years. The installation of onshore and offshore wind turbines, solar panels and the reinforcement of the grid to cope with these intermittent energies is expensive! But there is a particularity to be noted: this money does not come from the state budget but directly from the pocket of the consumers via various taxes which increase from year to year on their electricity bills (the CSPE in France), or on the price of gasoline (the carbon tax). In addition to this is the gradual closure of nuclear power plants (which do not produce CO2, etc.), which produce cheap electricity. The cost of "intrinsic" energy, to which taxes are added to finance renewable energy, will therefore explode in the years to come.

And energy, we use it everywhere. As a result, the effect on the general price level will become inexorable. We have to add the restructuring costs borne by fossil fuel-related sectors, such as the automobile industry, the migration from oil-fired heating to electricity, and so on. That is what could restart inflation, at least in Europe, because the United States, as we know, left the Paris Agreement on Climate Change and does not hesitate to use fossil fuels, while China does not give a damn about its CO2 emissions. A price increase that is only localized in Europe would have even more destructive effects (loss of competitiveness, lower purchasing power, risk of recession).

Without even addressing the question of the authenticity of anthropogenic global warming, it is urgent to become aware of this inflationary risk which would cause a serious shock to the European economy.