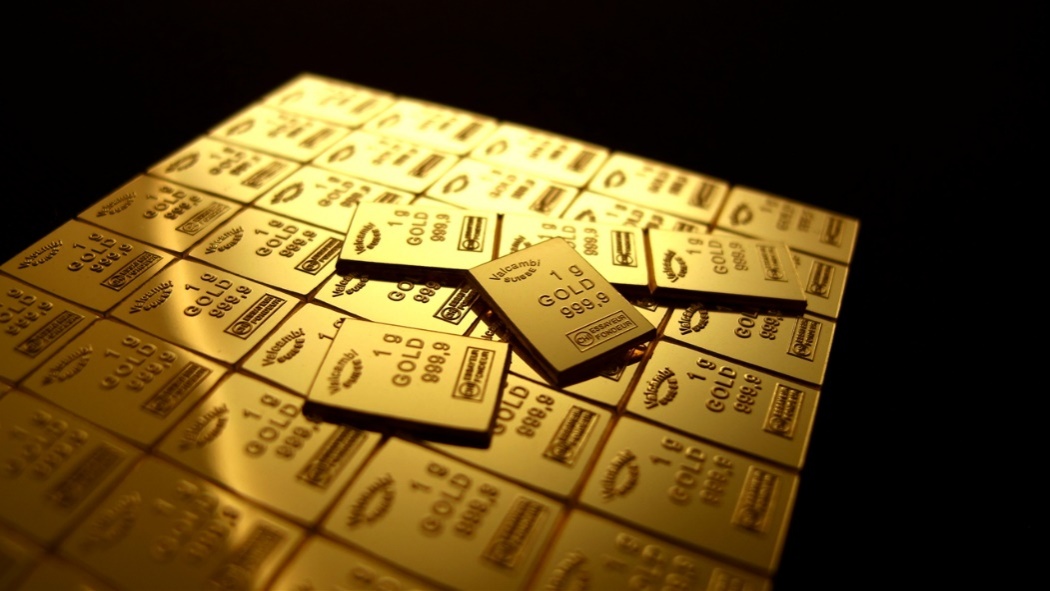 In this article I want to approach the idea of a gold standard from a more “regular people” perspective rather than from a “high academic” economic/finance and, sometimes, legalistic perspective. I constantly read books and articles full of mathematics written by the economic academia, trying to show why a gold standard is a relic of Antiquity, undignified of the modern world.

As a physicist, still, I would like to remind economists that they would not be able to write their papers on a PC, communicate with an iPhone, drive a car or fly on a plane, if it weren’t for two relics of Antiquity essential to scientists and more than 3,000 years old that barely changed since then: algebra and geometry.

When I was a child, my father, an engineer, used to tell me over and over again, “If you can’t explain it in simple words, it’s because it makes no sense or you don’t understand it yourself”, and “keep it simple”.

Recently, while researching for an article on the gold standard, I stopped and thought about a “new” (not from Antiquity) standard: the metric system. I realized how exceptional and how humble those scientists were when they created it. I just couldn’t believe it. Here is a system designed to correct a problem faced only by scientists, which is to measure quantities at the angstrom level (10−10) and at the astronomical level (1010) that the old system couldn’t handle. They could have designed a system that only they can understand. Who cares if the common people don’t? Too bad for them… They will have to hire us to do the calculations. However, look at the system they designed. It allows those highly educated “rocket” scientists to work in fields like particle physics and astrophysics but at the same time so simple that even an analphabet can learn it fast. They used the base 10, which is the easiest to learn and use. Don’t need a diploma to multiply or divide by 10. For temperature, they chose as limits the freezing point as zero and boiling point as 100. Again, base 10 and the range humans deal most of the time. No need to do sophisticated calculations to understand it.

Why do I tell you this? Because every time I talk to an economist (except Austrian) about a new monetary standard he comes up with complicated formulas of triple integral of a basket of 100 commodities, weight adjusted, etc. No, I don’t exaggerate much. I am also often asked after presentations why gold and not oil or water? The Ph.D.proudly remarks to me that they are much more valuable and useful than gold. I usually tell them that if I brought a 10 year-old analphabet from the streets of Cairo or Los Angeles he would have no problem answering this question without hesitation. After thousands of years of trial and error, gold has always been preferred. Gold is almost perfect for money. Even during the last 100 years of fiat paper currency, gold remained in the background and in crisis brought back into the limelight with the speed of light (2008 financial crisis).

Some economists argue that the unit of account is the most insignificant aspect of money. Well I don’t think so. Try to go to a store not knowing how much a kilogram or, for the Americans, a pound is from place to place and from one day to another. But that is what we have now with fiat currency and more recently electronic currency.

For thousands of years coin clipping was a crime punished by death. Today under a very academic name of inflation, it is a very high monetary policy instrument in the management of the economy and the international monetary system. Recently it was replaced by a “higher level language” of QE (Quantitative Easing). I am surprised they didn’t call it Quantum Electrodynamic Easing (QEDE). Sorry, professor Feynman, for degrading your theory (which by the way I understand better than professor’s Bernanke’s QE). Also, for those of you who didn’t study economics and wasted your time in medicine or engineering, in plain and common English, inflation is coin clipping and, for thousands of years, equivalent to stealing, often punishable by death.

Recently there has been talk of an international monetary standard based on a formula called P-gold, and another based on a basket of fiat currencies called the SDRs (Special Drawing Rights). Jim Grant, publisher of the Grant's Interest Rate Observer, says about it that, “… Gold is instantly and optically recognizable as money. SDRs, like a bad joke, have to be explained.” I couldn’t say it better. P-gold (Paper-gold) is linked to Friedman's k-percent rule. I am not going to explain k because then I would have to explain GDP, and then on and on.

Let me tell you the story of the gold prospector who met St. Peter at the Pearly Gates. When told his occupation, St. Peter said, ‘Oh, I’m really sorry. You seem to meet all the tests to get into Heaven. But we’ve got a terrible problem. See that pen over there? That’s where we keep the gold prospectors waiting to get into Heaven. And it’s filled – we haven’t got room for even one more.’ The gold prospector thought for a minute and said, ‘Would you mind if I just said four words to those folks?’ ‘I can’t see any harm in that,’ said St. Peter. So the old-timer cupped his hands and yelled out, ‘Gold discovered in Hell!’ Immediately, the gold prospectors wrenched the lock off the door of the pen and out they flew, flapping their wings as hard as they could for the lower regions. ‘You know, that’s a pretty good trick,’ St. Peter said. ‘Move in. The place is yours. You’ve got plenty of room.’ The old fellow scratched his head and said, ‘No. If you don’t mind, I think I’ll go along with the rest of them. There may be some truth to that rumor after all.’
This story from Ben Graham that Warren Buffett likes to tell is actually about an oil prospector, but it’s just as fitting with a gold prospector. Why am I telling you this story? Because inflation (coin clipping) has the same effect on humans. Comes a time when even those who created the rumor (inflation) end up believing in it and its beneficial effects. I have found myself so very often with wealth managers, investment advisors or economists who would mistake price rises due to changes in supply and demand with inflation, which is a devaluation of the medium of exchange (dollar, euro, etc.). Moreover, devaluation of the medium of exchange lets the State create confusion, to the point that people no longer know how to protect themselves, even those supposed to have created and studied it. After having created inflation, they end up believing themselves in it and its nominal imaginary benefits, like the gold prospector.

Recently, at the famous world central banks’ annual gathering in Jackson Hole, USA, according to the Wall Street Journal, even “Central bankers aren’t sure they understand how inflation works anymore”. As if they ever did.

Gold, while being so simple to understand, has the best physical characteristics to be money as it has been recognized for thousands of years by millions of people from every culture, level of education and on every continent. No Ph.D. in economics or physics necessary. As the president of France, General Charles de Gaulle, said it best, “The time has come to establish the international monetary system on an unquestionable basis that does not bear the stamp of any country in particular. On what basis? Truly, it is hard to imagine that it could be any other standard than gold.

Yes, gold whose nature does not alter, which may be formed equally into lingots, bars or coins; which has no nationality and which has, eternally and universally, been regarded as the inalterable currency par excellence.”

Robert Mundell, Nobel Prize of economics, said, “Gold has fulfilled the role of a de facto universal money, a standard of value, the link between the past and the future and the cement linking remote parts of the human race to one another.” Alan Greenspan, former chairman of the Fed, said, “Gold still represents the ultimate form of payment in the world. Fiat money, in extremis, is accepted by nobody. Gold is always accepted.”

Gold is not perfect money but it is, in my mind, the closest to perfection and simplicity you can get to. Many examples are given of the stability (even if not perfect) of gold as a standard of medium of exchange, but I will just mention one I like, because I have a simple brain, and that is of bread priced in gold 2,500 years ago and today. 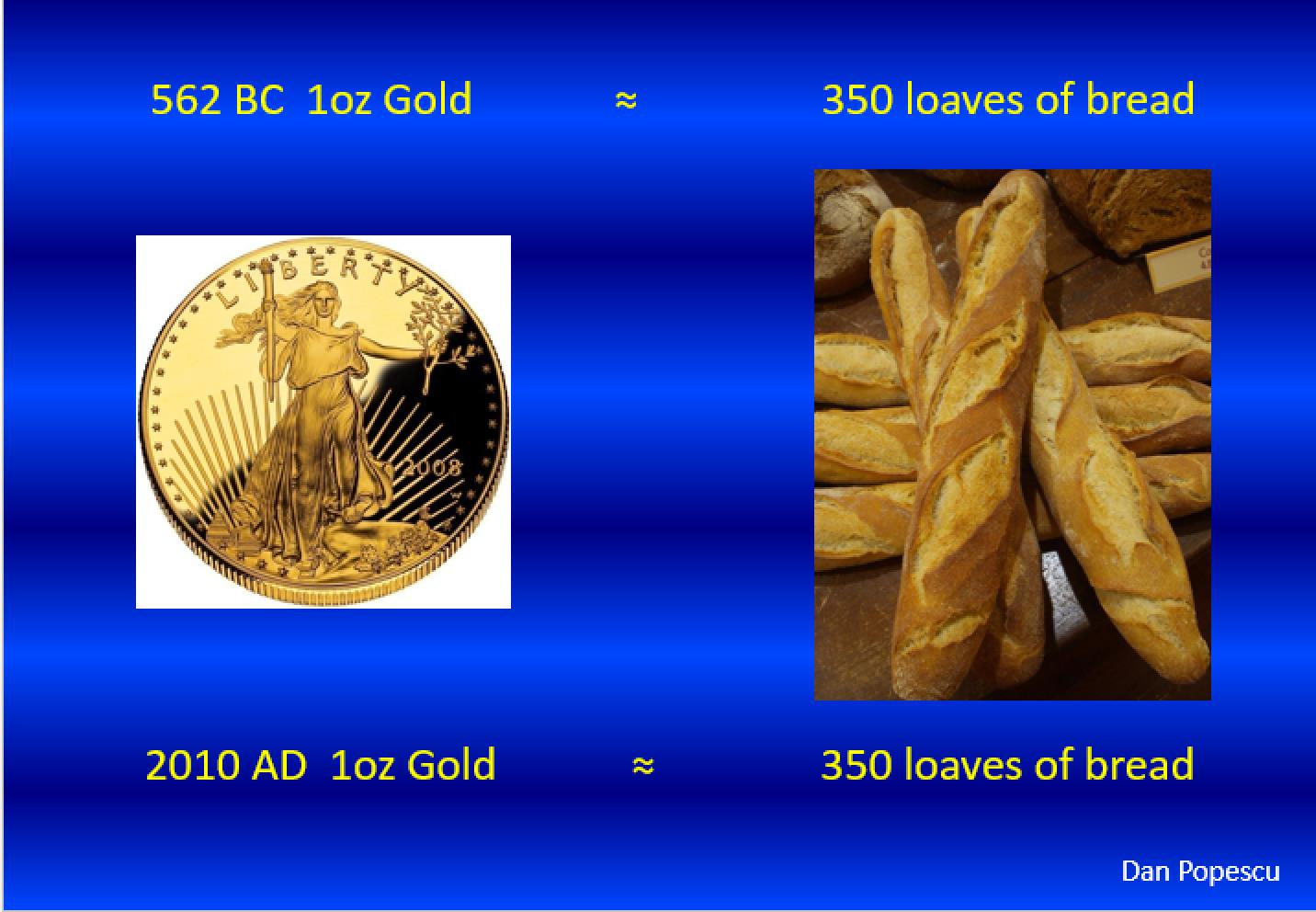 In conclusion, I would like to show you the evolution of the gold price in nominal British pounds since 1260 and then in the next chart since 1560 versus inflation and inflation-adjusted price as beautifully prepared by Nick Laird, of Sharelynx.com, based on Roy Jastram’s book, The Golden Constant. What do you think happened in 1900? 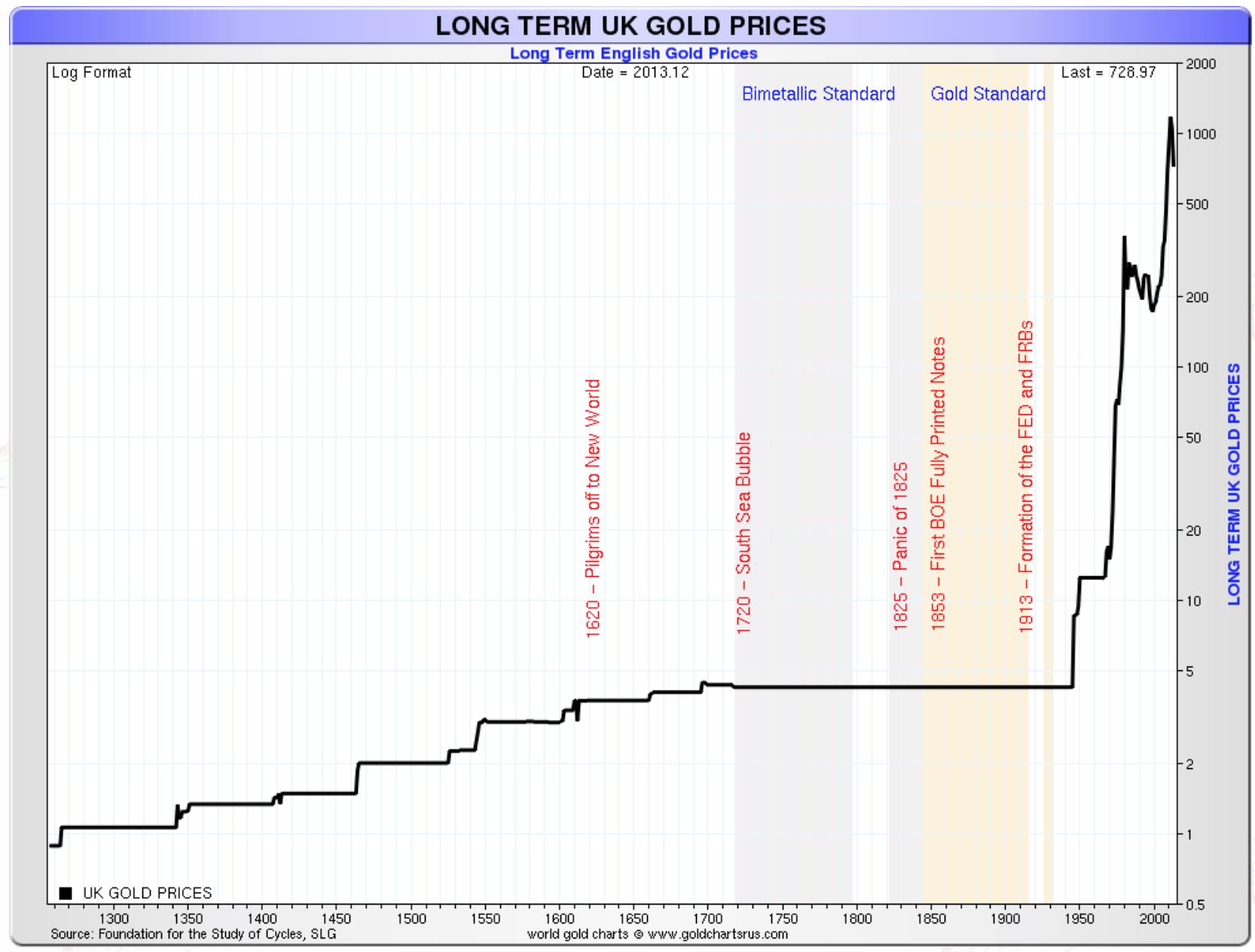 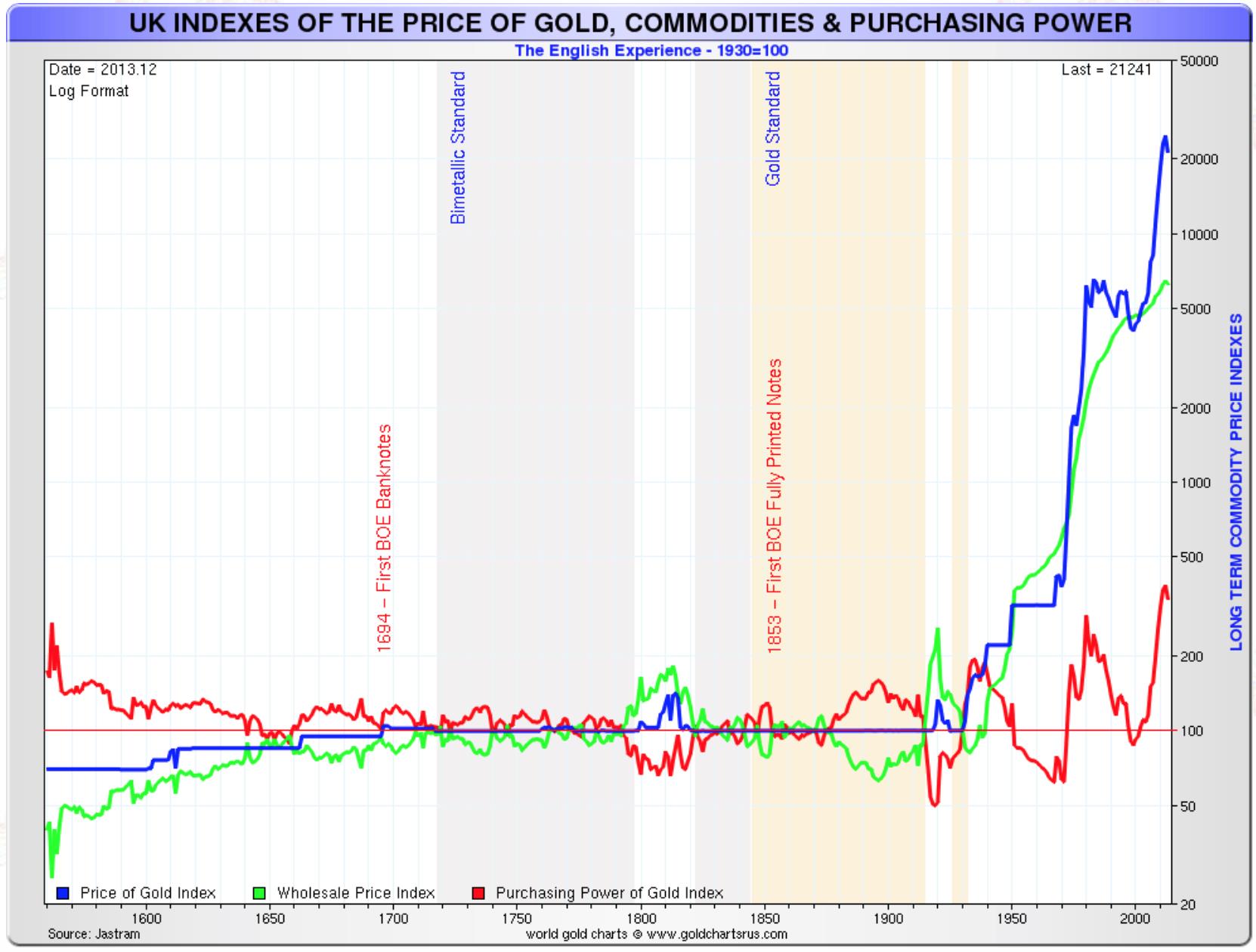 Are we possibly in yo-yo economic times? Doesn’t inflation give you dizziness? It certainly gives me. I would certainly feel better after some acrobatic flying than I feel after QE to infinity.

So, why do I like a gold standard? Because it’s simple, logical and it works.That’s why. 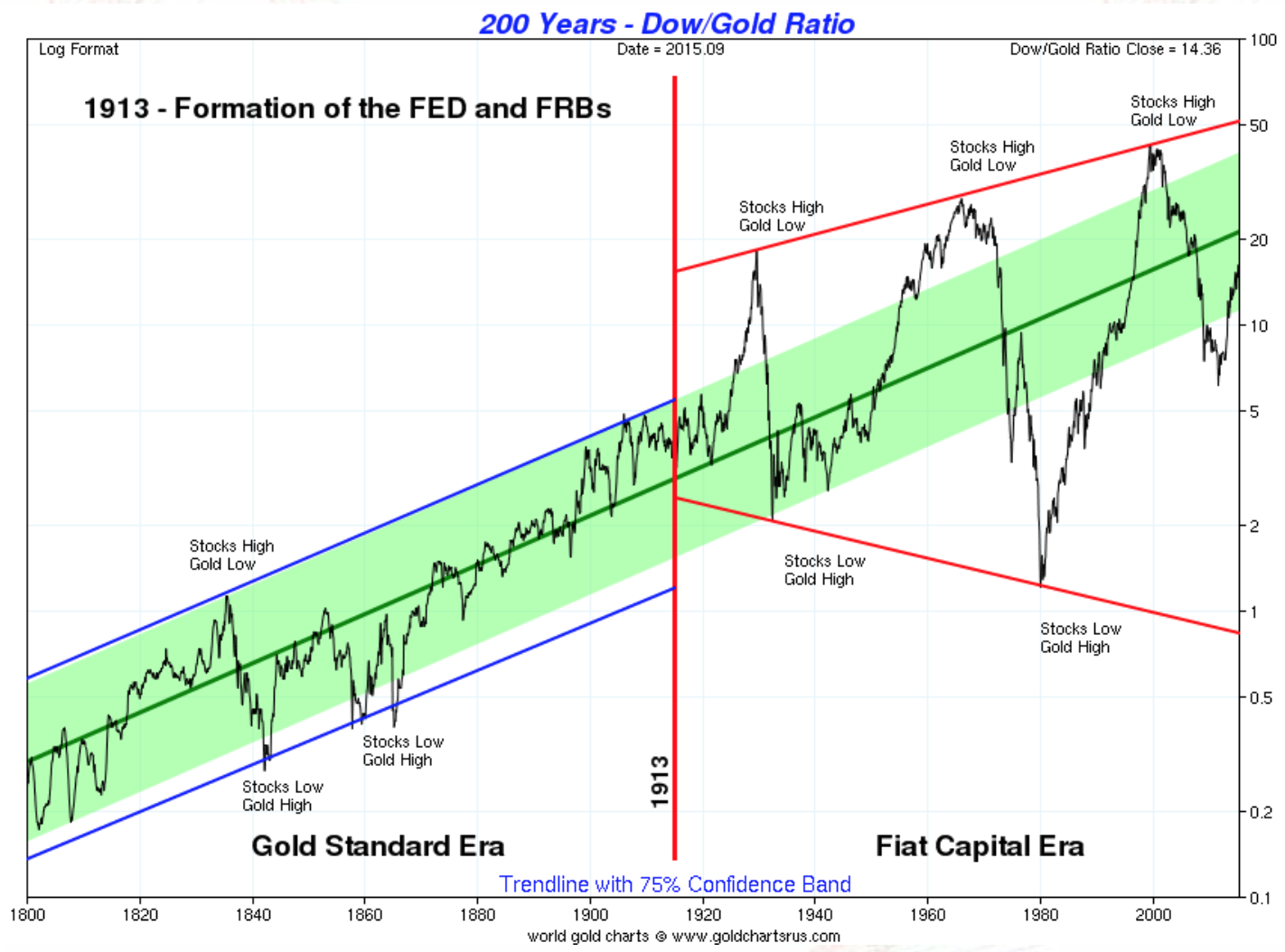 The gold standard; no Ph.D.required 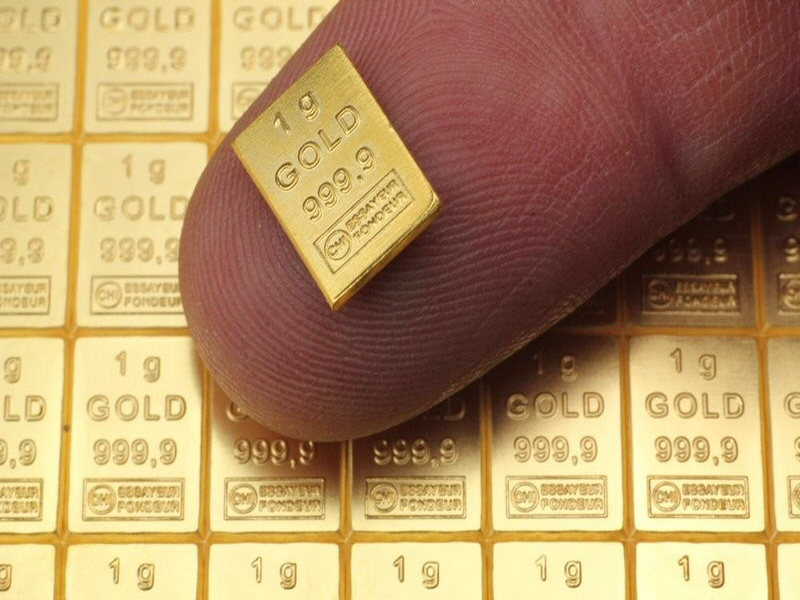