In August 2019, I had written a piece entitled "Negative rates: how far can we go? A bit of economic fiction". I had taken the simplistic case of an interest rate of -10% in order to see what it implied for the different economic agents (the saver, the borrower, the banks, the government). It was more of a textbook case than anything else, I thought at the time, but reality seems to be catching up with fiction since we are now almost at half that rate! 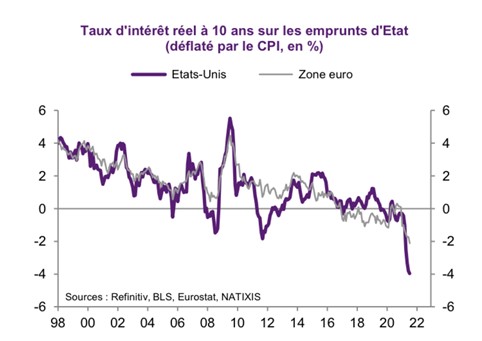 This figure corresponds to what the "classic" saver (life insurance, bank booklets) loses in purchasing power on his investments every year. Hard-earned money put aside sees its value melt in the sun. -2% per year doesn't sound like much, but that's half the value of the savings that disappears in 35 years, with -4% the division by two is done in 18 years.

And there is little chance that this will change: "Central banks will not dare hike nominal interest rates sharply even if inflation rises sharply" explains Natixis, because this would trigger a public debt crisis, as the states are far too indebted, especially since the Covid crisis, as well as a fall in assets (shares, real estate) which would be devastating for the economy. Prices will therefore continue to rise and interest rates will remain low.

A completely Ubuesque situation that generates asset bubbles, a laissez-faire attitude on the part of governments (which pay back with devalued money), the progressive ruin of savers, and the erosion of household purchasing power. In short, a dysfunctional economy that is unable to generate growth, which is very worrying when the debt is high.

Central banks are stuck and condemned to see the value of their currencies deteriorate, hoping that inflation will be "temporary". Well, what else could bring it back below 2%, except the end of money printing and a rise in the key interest rate? So this situation will continue and get stronger, maybe one day we will reach the -10% real interest rate, as in my fiction (i.e. a division by two of the value of savings in only seven years). But the monetary and financial system will probably have exploded before then.