The Calm Before the Storm in the Gold Market

US Dollar Index vs Spot Gold 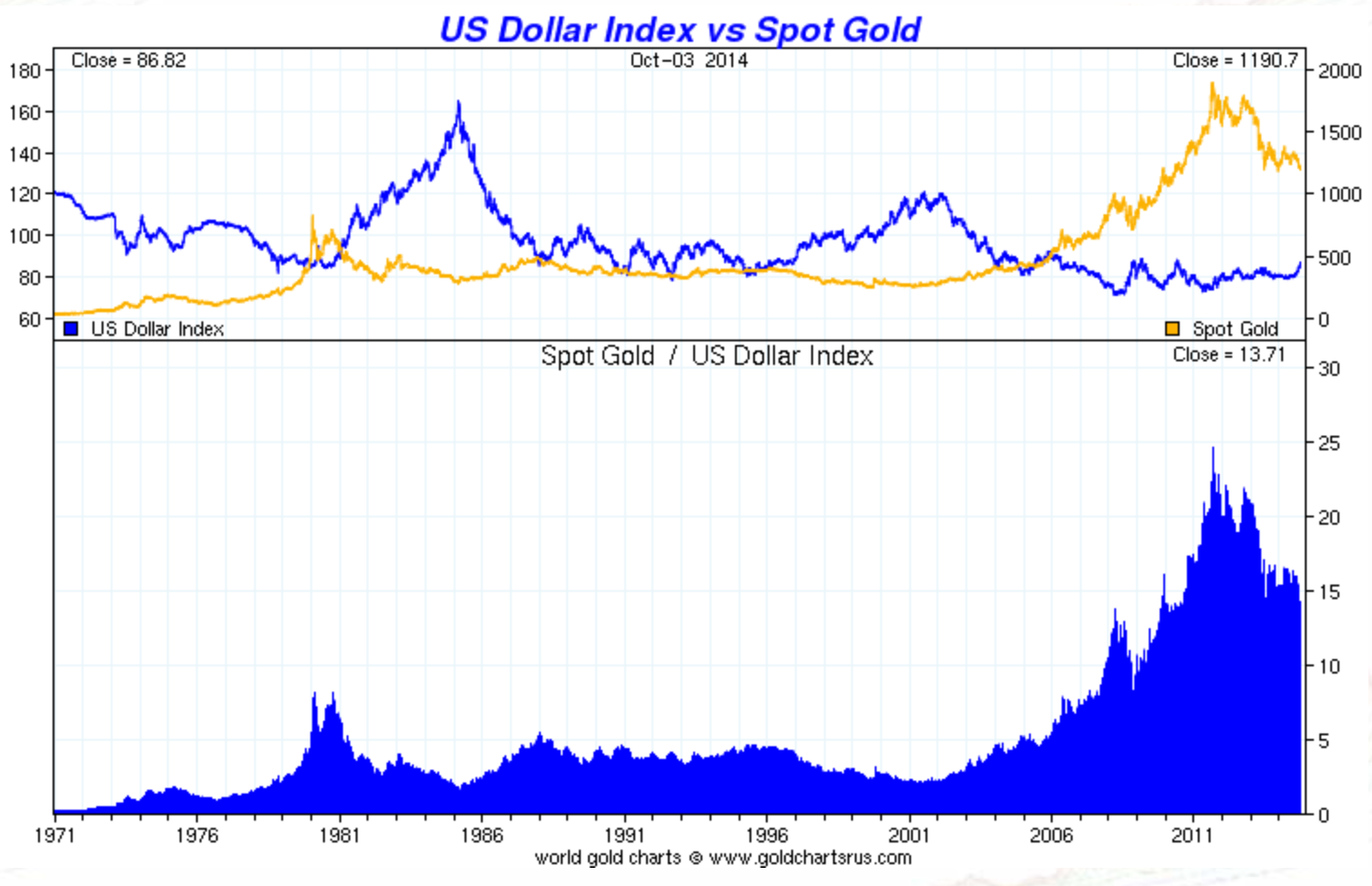 Again this week the gold price tested the $1,200 level dropping below it on higher US dollar against most fiat currencies. It is assumed that a stronger US dollar against the euro and other fiat currencies is also negative for the price of gold. However gold is not a hedge against the US dollar but rather against all fiat currencies. Even though gold’s price has been falling, in India and China gold premiums have increased signifying a rising demand. We have also seen a substantial increase in silver and gold coin sales in the US. Actually gold coin sales doubled in September compared to August. 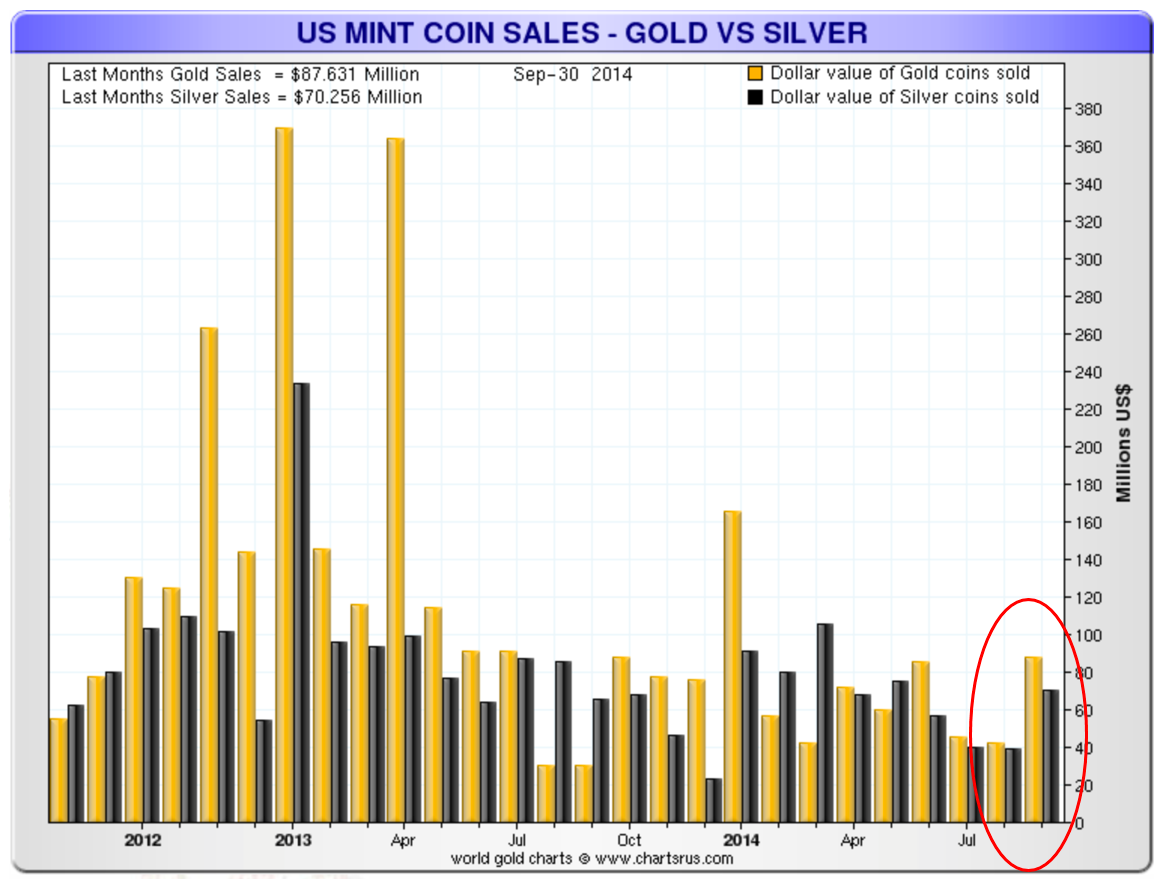 With sentiment at historic low as I explained in my previous article Gold Sentiment, $1,200 and more specifically $1,180 is more a correction within a secular bull market than a pause in a larger bear market. With more and more articles coming out with titles like “Gold Dies”, I am more convinced than ever that we are seeing a major bottom being crated. Eastern central banks are still buying massively and Western central banks are holding on to their stock. This doesn’t look to me as a continuation of a downtrend.

On November 30, Swiss citizens will go to the polls to vote on three areas; whether or not the Swiss National Bank should increase its gold reserves to 20%, that the central bank should stop selling its gold and that all its gold should be held within the country. If by any chance the Swiss people votes in favor I expect major tremors in the gold market. Just the fact that Switzerland will have to buy a large amount of gold to reach the 20% will have a major psychological effect on the gold market not to mention also the snowball effect it will have on other countries. Switzerland is a very small country but with a long history of gold ownership. A vote in favor in the Swiss Gold Initiative referendum would mean that Switzerland would have to buy 1,700 tonnes of gold. This represents 70% of annual world gold production. The Swiss National Bank has 5 years to acquire the 1,700 tonnes if the initiative passes.

Gold as a hard currency is also influenced by geopolitics. But for gold to go up you need not just a local crisis but a crisis that has global impact. Other ways it only increases in price locally in the conflict area with temporary impact on global price. With the Crimean annexation by Russia the world has switched from a détente and disarmament environment to a new cold war and rearmament. Local conflicts are appearing everywhere with potential of escalating into a global conflict. The Middle East and in particular the Iraq/Syria region has become a stateless land where ISIS is trying to expand its influence and destabilize the entire region. Libya, an oil rich country is still in chaos and now social unrest in Hong Kong is threatening stability in China. Let’s not forget the recent unrest in the US with the Ferguson riots, a suburb of St. Louis, Missouri. The US is not used to having social unrest on its own territory. Home grown terrorism spurred by economic hardship has not happened in the US since the 60s. There is a believe in the US that trouble can only come from the outside forgetting even the recent Oklahoma City bombing by a good American boy named Timothy McVeigh. In Europe high unemployment, the rise of the extreme right and secessionist movements (Scotland, Catalonia, etc.) threaten the European Union.

The currency wars are still alive and contrary to the G8 agreement not to manipulate their exchange rates, this is what is actually happening. The US dollar going up against the euro is a stated desire of the European Central Bank. But there is no reason why gold should move with the euro. Gold is the anti-fiat hard currency not just the anti US dollar. Gold has risen as much in all paper currencies in the last 15 years not just against the US dollar. In the most recent Fekete Research Gold Basis Service, Sandeep Jaitly states that “December silver remains in backwardation and December gold is soon to join it”.

In a recent article in the London Financial Times, John Dizard mentioned an increase in gold’s “popularity as a medium of exchange for international transactions has been soaring, particularly in the past few months as the impact of US government sanctions on non-compliant banks has become severe.” And that, despite gold being “the most expensive and least convenient of all of the monetary alternatives to the dollar.” I emphasize the words “medium of exchange” and “soaring” because if we believe the mainstream media nobody wants to use gold as money because it is expensive and least convenient. I mentioned it in a previous article on gold sentiment but I wanted to mention it again because I think it is a very important piece of information.

Physical gold is being accumulated and used in exchanges but very discretely as of now. In a recent report mentioned in the UK Telegraph it is revealed that a record number of super-rich elite are buying gold bullion bars weighting 12.5 Kg. The report says “The gold buying secrets of the UK come as it was recently revealed the number of 12.5kg gold bars being bought by wealthy customers has increased 243% so far this year, when compared to the same period last year.”

The geopolitical and economic environment in the last few months was in my view the calm before the storm. All the economic issues both in Europe and the US and all the geopolitical conflicts I mentioned above, or a combination of them have the potential to degenerate “unexpectedly”. Both the economic and political environments are uncertain and will surprise the complacent markets. More and more the current environment reminds me of the Citigroup president’s statement to the Financial Times before the 2008 crisis. CEO Chuck Prince made clear that he was aware of the risks his company was taking but said “When the music stops, in terms of liquidity, things will be complicated. But as long as the music is playing, you’ve got to get up and dance. We’re still dancing,”

An unexpected precipitating event like a black swan event in this uncertain environment will push gold and silver up with a quantum leap with gold leading.