Many years of loose and unconventional monetary policy have severely damaged financial markets and the global economy. Currently, central banks find themselves cornered, as the financial system is drowning in debt and addicted to ever easier money. Gold, however, provides multiple solutions.

The other day I sent out a thought-provoking tweet, which addressed how gold can solve three problems central banks are currently facing:

Gold is the only way out for central banks.

CBs want to repair their balance sheets? They need a higher gold price.

The tweet was born out of several ideas I had for articles to write. One, on the relationship between the gold price, inflation expectations, and the inflation needed to lower the debt burden. Two, on the accounting structure of central banks’ balance sheets, and the ability of using gains in the price of gold to absorb losses on other assets. Three, on restoring financial stability through a new equitable monetary system that incorporates gold. In aggregate, I think gold will be used to get out of the current financial mess.

Today’s article is a preview of the three aforementioned articles.

Due to excessive debt levels, central banks are desperate to spur inflation and keep interest rates at or below zero. Deeply negative real interest rates would lower the debt burden. But creating consumer price inflation is not easy in this day and age.

Exhibit 1. Gold price growth is plotted the same way as inflation: as a percentage change from one year ago (YOY). 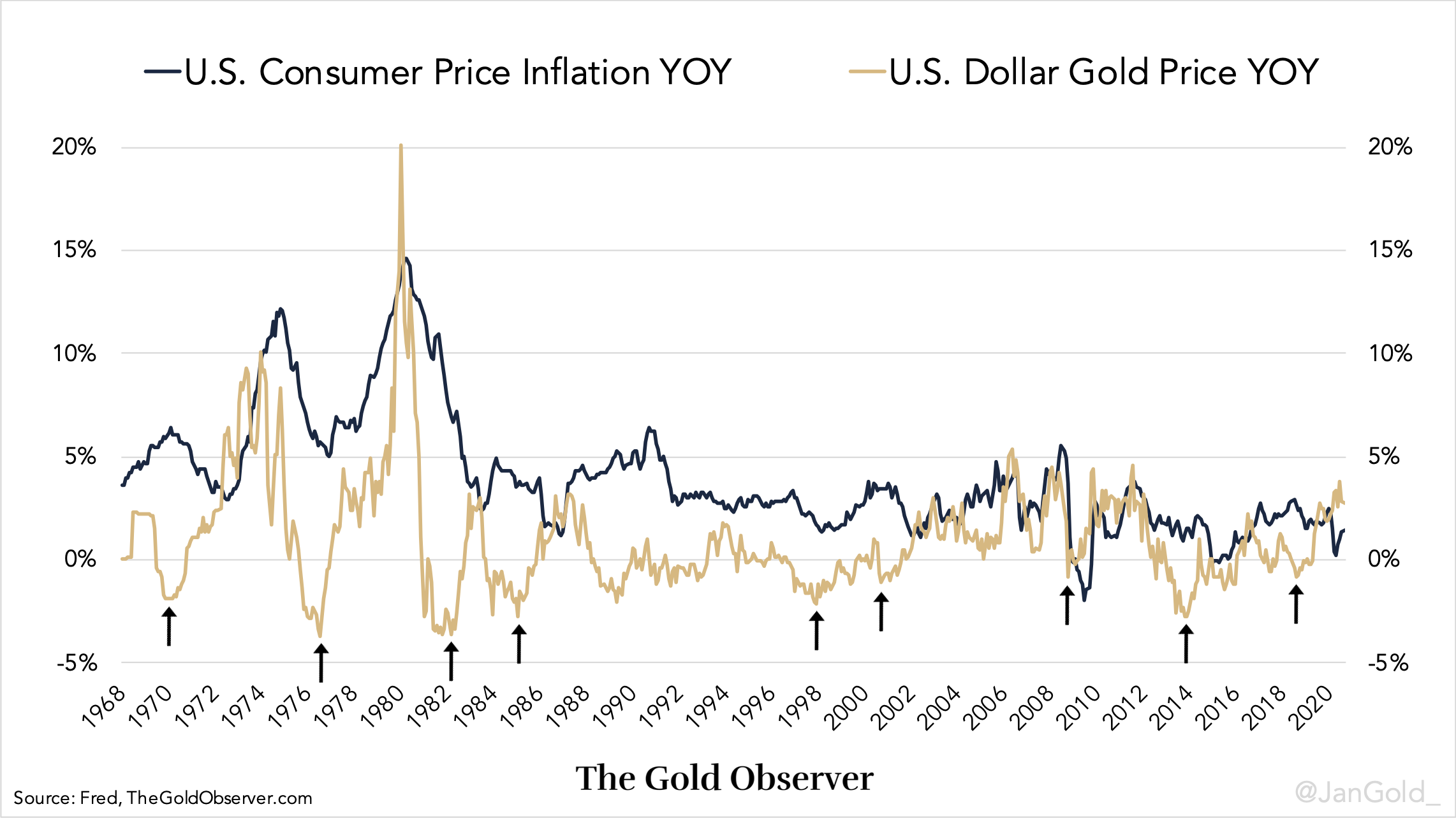 In 1990s the Federal Reserve even based its monetary policy partially on the price of gold (source). If the gold price went up—and the market signaled it was expecting inflation to rise—the Fed would tighten. If the gold price fell, the Fed would do the opposite. On February 22, 1994, the Chairman of the Fed, Alan Greenspan, explained to Congress:

A higher gold price can bolster inflation expectations, and this is what central banks want.

In the eurozone, central banks carry gold outright on their balance sheets. Since the Eurosystem was launched in 1999, these central banks have continuously mark-to-market their gold. (Unlike in the U.S. where the monetary gold is still valued at the statutory value of $42.22 per troy ounce.) From an accounting perspective, European central banks have created a capital buffer, consisting of unrealized gains in the gold price, to absorb losses on bad debt.

Exhibit 2. From Germany’s Gold, published by the German central bank in 2018. 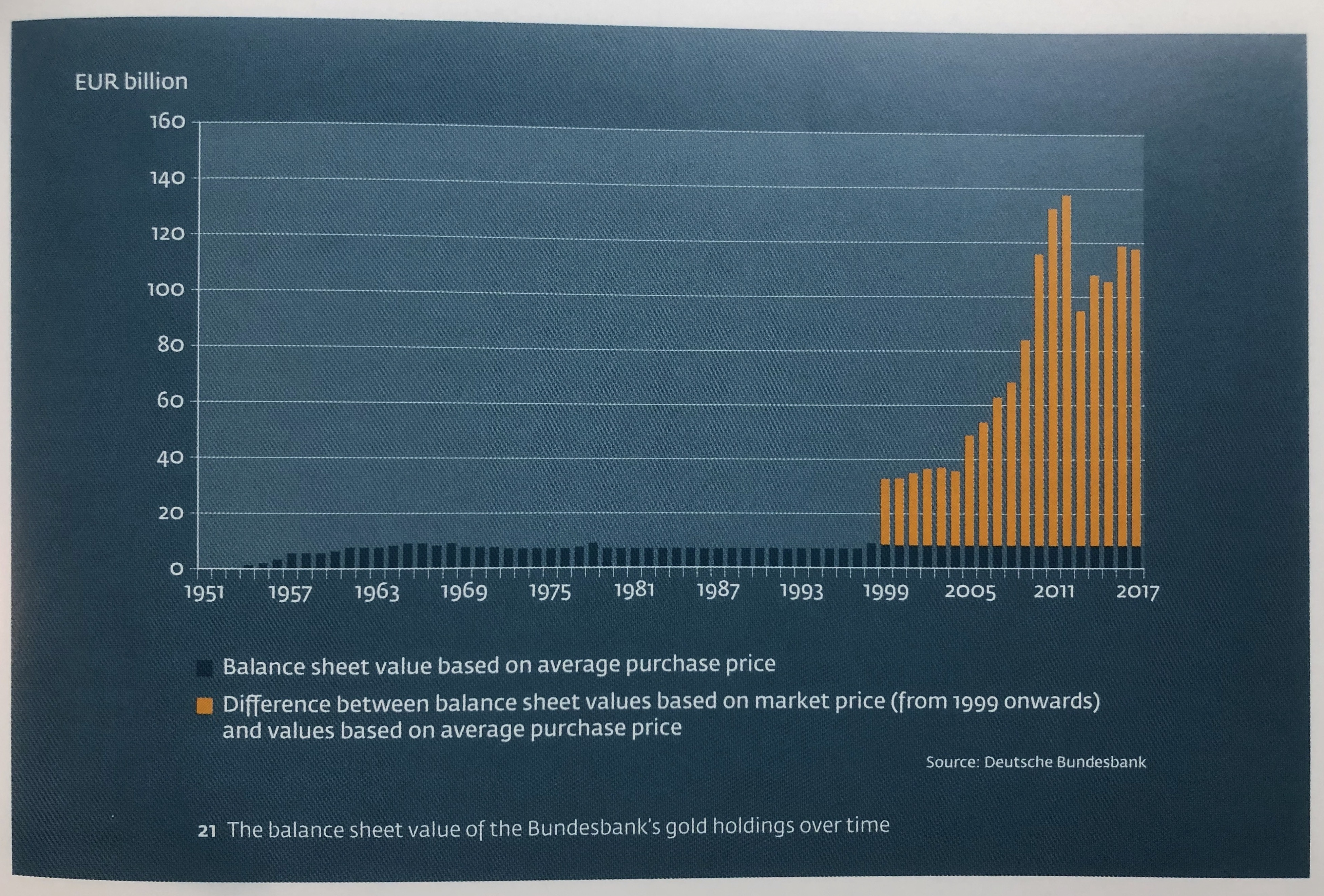 In recent years, central banks have soaked up a tremendous amount of government bonds. Possibly, some of these bonds, i.e. Italian bonds, will be restructured and central banks will have to take losses. In the eurozone—but elsewhere too—the gold capital buffer can absorb these losses. If there is too little capital, the price of gold can be revalued.

At this point, printing more money and lowering interest rates only works counterproductive. More unconventional monetary policy will increase the debt burden, lower productivity, increase inequality and social unrest, etc. It’s a dead end street. One might wonder, why don’t central banks revert to a gold standard? Gold has been the most stable currency in the past centuries, if not millennia. Why not switch to a monetary system based on gold and discipline? There are two reasons.

One, if a country would shift to a gold standard tomorrow, its currency would appreciate versus other currencies, which is unacceptable now. Countries will not shift to gold until their debt to GDP ratios have decreased, and there is no other option due to societal instability. Then, they can shift to gold all at once to restore stability.

Two, gold reserves need to be evenly distributed internationally for an equitable and durable monetary system based on gold. Why? The economist Robert A. Mundell wrote that in the late 19th century more and more countries joined the gold standard, which made gold demand go up. As a result, the value of gold increased, which—on a gold standard—was deflationary. Although I do not have empirical evidence that Mundell is right, his theory makes sense. Accordingly, it would be advantageous for gold reserves to be equally dispersed relative to GDP before the world switches to a gold standard, or the new system would be unstable from the start.

Previously, I have shown that since the 1970s monetary gold has been more evenly distributed around the world, supported by gold sales from European nations that relatively owned too much. The Dutch Minister of Finance officially stated in 2011:

Through gold sales in the past, the Dutch central bank brought its gold holdings relatively more in line with other important gold holding nations.

At the time, DNB [Dutch central bank] determined that from an international perspective it owned a lot of gold proportionally.

By distributing gold reserves, Europe has prepared an equitable international gold standard. Furthermore, on its website the Dutch central bank is clear on gold’s potential:

Shares, bonds and other securities are not without risk, and prices can go down. But a bar of gold retains its value, … Gold is the perfect piggy bank – it's the anchor of trust for the financial system. If the system collapses, the gold stock can serve as a basis to build it up again.

As a follow up, I will publish more on the distribution of “the gold stock [that] can serve as a basis to build” up a new system.

The above is a short discussion on the dynamics regarding gold and financial developments in the years ahead. As I have stated before I think we are heading towards a new monetary system that incorporates gold. Although, I do not know how it will be structured. When I write about a forthcoming “gold standard,” it refers to either a classical gold standard or a new model. 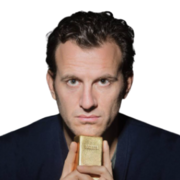