Going through her speech, hoping for some hints about the International Monetary Reform, I discovered different things, which deserve our attention.

Mexico, Venezuela and small oil-producing countries suddenly saw an unexpected influx of dollars and believed that this heavenly windfall would last forever. These states have therefore borrowed gigantic sums to create modern infrastructures, highways, airports, refineries, etc and increased their production. The brutal increase of oil prices plunged the developed countries in a recession and the oil demand fell. Because of the oil glut, the barrel’s price went from $124 to $78. At the same time, because of the strong inflation during the seventies, the advanced countries tightened their monetary policies by increasing interest rates. It strangled the indebted countries.

Very quickly, in 1982, Mexico threw a paving stone in the pond, announcing that it could not honor its debt. It was immediately followed by a dozen oil-producing and developing countries. The biggest global banks of the day, and especially in Wall Street, took a huge financial broth. It will take 7 years before a lasting solution is found with the Brady Plan in 1990. This debt crisis generated a global liquidity crisis and a huge speculative bubble in the dollar.

To break this speculation on the dollar, the central banks of the developed countries tried to find a deal, which has gone down in history as the "Plaza Agreements". Instead of allowing currencies to adjust freely, Japan, the United States, Great Britain, France and Germany agreed to lower the dollar against other currencies. Japan at the height of its economic power at that time, will be the big loser of the Plaza Agreements. The Country has never been out of the crisis since.

After the Plaza Agreements, the dollar fall in 3 years from 165 to 88 against other currencies. 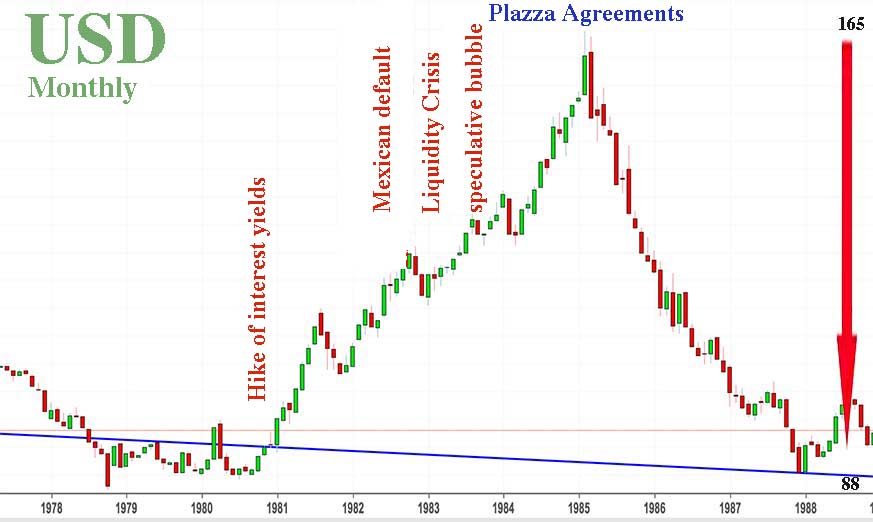 Remember, China, which has been the locomotive of the world economy for several years, refused "Plazza Agreements 2.0", so as not to suffer the same fate as Japan.

In early 2020, an epidemic broke out in China, which will cause the Middle Empire to block its exports and close its borders (following the anticipations of the Rockefeller Foundation of 2010 "Lockstep"). Chinese example will be followed by the dominant countries, imposing very quickly a total blockage of the world economy. Developing or emerging countries will find themselves with their exports blocked and the inflow of dollars suddenly dried up in February-March 2020. Logically, if the reserves of their central banks dry up, these countries cannot honor the due dates of their debts.

With the announcement of "lockdowns" and border closures, speculators had been playing the dollar higher, anticipating an inevitable liquidity crisis.

But the senior monetary authorities had been very responsive. So much so, that on Monday March 16, a virtual meeting of the financial leaders of the G7 discussed the debt crisis and the following Monday, a G20 of international finance announced "the suspension of the debt service" of the developing or emerging countries for at least the 6 following months.

On the chart below, we can see that a few insiders will sell their long positions early on Friday 20 at the top of the speculative bubble, before the official announcement of Monday 23, when the dollar falls sharply. It had been a “Bull-Trap”. Those who played the rise of the dollar with leverage, were forced to sell their positions in disaster, accelerating the fall.

In the body of her speech, Kristalina Geogieva mentioned the "suspension of debt service", which intrigued me and my research brought me to this page of the World Bank, then to the successive meetings of the 16th and the 16th. March 23, explaining the brutal movements of the dollar.

"With the World Bank, we support extension by the G20 of the Debt Service Suspension Initiative."

Madame Georgieva encourages the continuation of this suspension of debt service by pushing public and private financiers to seek solutions to renegotiate debts. This is what happened in 1985, short- and medium-term debt had been turned into 30-year debt, more or less guaranteed by the United States.

"I am encouraged by G20 discussions on a Common framework for Sovereign Debt Resolution as well as on our call for improving the architecture for sovereign debt resolution, including private sector participation."

For a long time, Martin Armstrong had anticipated a rise in the dollar to a level higher than that of 1985, due to a liquidity crisis resulting from the swelling of the world debt. The graph below shows the debt as a percentage of GDP. In absolute terms, global debt was around $ 270,000 billions in January 2020.

If the Big Money of the World succeed in imposing a suspension of debt service for as long as the successive epidemics of seasonal flu last, the demand for the dollar can only decline... and all the more so, if governments impose rules, which strongly slow down their respective economies. 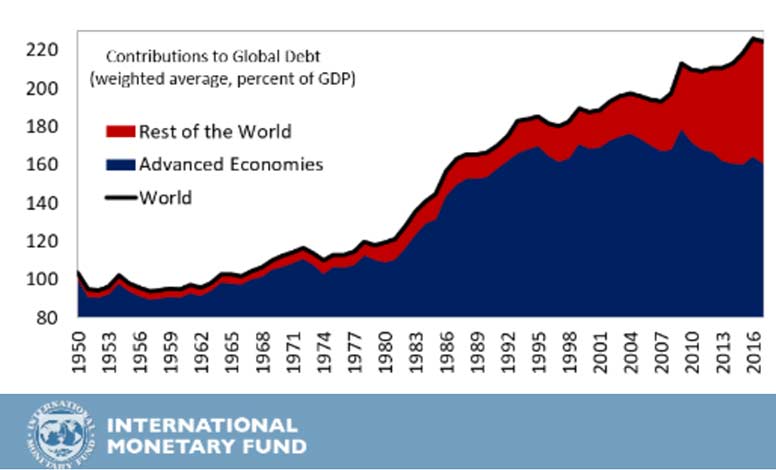 Remember that iteratively, it is about establishing a "Debt Jubilee", that is to say a cancellation of debts, especially sovereign ones. The subject was dealt with by Forbes on April 2, 2000, lesprodeleco in June picked up by FranceBourse and RTL. The Debt Jubilee would put the world economy back on a sounder footing.

The cancellation of debts would involve a quid pro quo so that the major creditors, who have lent to the states, do not see their capital disappear overnight.

Historically, when a state wanted to reduce its debts, it devalued the currency. It was enough for a long time to remelt the coins, while reducing their silver content. Then during the relatively short period of the gold standard, to increase the price of gold in the national currency. Today, the price of gold should go up in the main dominant currencies, especially the dollar and the euro. International negotiations have been underway since 2008 about that, but The Economist magazine was already writing about it in 1988.

Since the G20 on March 23, the dollar has been in a well-defined bearish channel.

On July 31, prices rebounded on the bottom of the channel, before lateralizing into a long level of consolidation of the previous decline.

The support at 92.8 had been attacked and defended many times over the past 3 months.

But who knows what could happen after the Election Day?

Stephen Roach, former Morgan Stanley chief economist for Asia, lecturer at Yale University and author of Sino-American Interdependence, has been hammering out the same message for months.

"The economies of Americans are going to be weaker and weaker, worse than in the entire history of the United States but also of any dominant nation, while the budget has been in massive deficit for many years. And at the same time, l America seeks to move away from Globalization by decoupling from the rest of the world, and this is a lethal combination.

The dollar is expected to fall 35% against all other currencies. It's hard to give the timing, it might take a year or two. This will be extremely negative for the US stock market."

What is interesting is that Stephen Roach did multiple interviews with Bloomberg on June 9, CNBC on June 15, MarketWatch on June 23, Business Insider on June 26, EconomicTimes on July 14,…. And he resumes his crusade in September on CNBC, Business Insider... And he continues to hammer the message on September 30 les Echos, October 5 on Financial Times, on Sputnik News on October 7 .

For my part, I would not be surprised if the dollar lost its dominant place in central bank reserves and in the IMF's basket of currencies, since this negotiation of monetary geopolitics is underway.

On June 3, 2020, in front of the World Economic Forum, Kristalina Georgieva, the current IMF director, gave a talk under the title "The Great RESET". In her speech she refers to the Bretton Woods conference, which set the monetary rules for the following decades and she declares that this epidemic is an opportunity to change the world. Klaus Schwab, the president of the World Economic Forum in Davos, even specified that this pandemic offered a rare and narrow window to reimagine and RESET our world. "Narrow" means that the time for this opportunity is running out and you have to go ahead without procrastinating.

This Great Reinitialization is currently underway.

On October 8, the US Mint announced that "to cover the increase in its costs and not be a burden on the US Treasury, resetting the price of silver is necessary."

As of October 15, the retail prices of the United States Mint are therefore as follows:

As you can see, the one-ounce Silver Eagle is $67. There is therefore now a big gap between physical silver and COMEX paper silver.

On the very day of the US Mint's announcement, Comex increased margins by 13% on Precious Metals, which did not disrupt the trades.

On this daily silver chart, we can see that since the beginning of September 2018, there has been a major resistance limiting the rise of silver.

This resistance was broken at the end of July during the strong uptrend before that prices consolidated lower in recent weeks.

As can be seen, the bullish support from the March low has supported prices, which are rising day by day towards the bull market’s major resistance.

Most analysts have an optimistic reading of this chart and consider the drop in prices from the August high point to be a "rising flag", a simple consolidation of this bull market, and they are certainly right.

Nonetheless, knowing how these markets work, I still think that there could be a last pullback on the horizontal resistance between $18-19 , that has blocked any rise in silver for 6 years. To cause this fall, while silver is in short supply and the dollar is currently in a downtrend, it would take a trigger event, which would wreak havoc on the derivatives market, i.e. silver-paper. Obviously, this trigger would wreak similar havoc for gold-paper.