Arabianmoney.net editor and publisher Peter Cooper is based in the Dubai Media City, and has been working as a senior journalist in the region since 1996. He was then the founding editor of the Gulf Business, the first-ever business magazine published in Dubai. In the year 2000 he was a founding partner in the business news and information website ameinfo.com.

His book about ameinfo.com, ‘Opportunity Dubai: Making a Fortune in the Middle East’ was No.1 in The Daily Telegraph Book Club for six months. An Oxford graduate in politics and economics, Cooper spent a decade in London as a financial journalist specializing in real estate and construction. He is also the author of ‘Dubai Sabbatical: ‘The Road to $5,000 Gold’.

You can read Mr Cooper analysis on Arabianmoney.net. 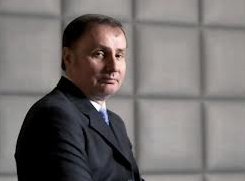 Peter Cooper: Dubai is known as ‘The City of Gold’ for a reason. The last time I checked about 25 per cent of the world’s physical gold trade transited Dubai and it is the single largest import and export item in the city, and that’s quite something considering that Dubai is a trading hub for the Middle East like Singapore is for Asia.

Silver is less important but Dubai was one of the first places to mint its own 1kg .999 silver bars to meet rising demand from local small investors, and bullion dealers now offer bars in all sizes.

Gold and silver are hugely popular locally as an investment class. Over 50 per cent of the population is from India so that helps to explain the importance of gold here. But Arabs have also always had a special affection for gold as tangible wealth that they can touch and see. The same is true for real estate.

FDR: Do you see a trend, like the one globaly underway, of people moving from « paper » gold investment to owning physical gold and silver ?

PC: Paper gold investments have never been very popular here. A gold ETF launched a couple of years back in Dubai has not been a great success, a bit surprising really given Dubai’s status as a gold hub and the 12 successful gold ETFs in India.

However, option trading for both gold and silver on the Dubai Gold and Commodity Exchange has almost doubled over the past year so paper trading in precious metal options does have a role here and it could well boom going forward.

«The manipulation of the silver price is going to backfire very soon on the short-sellers.»

FDR: Now, we are both bullish on gold but even more on silver, could you tell us why you think silver is going to perform better than gold in the coming years ?

PC: It’s a simple matter of supply and demand. The available stock of silver is a tiny fraction of that of gold – most of it is consumed by industrial processes – and to increase that supply means huge investment in new silver mines that will take years to bring on stream, or a big increase in copper and zinc production.

At the same time demand from investors for physical silver is clearly growing – you can see that in coin sales or the ‘Most Read’ articles on ArabianMoney.net. And as more and more demand is focused into the very tight silver market then the price can only move in one direction.

Gold reserves are much bigger by comparison and so the price moves by less than silver when demand goes up, and any increase in the gold price also makes the cheaper alternative look a better buy.

FDR: Are you familiar with the manipulation in the silver market, as explained by Chris Powell in a previous interview i made, and do you thing that one can not understand the potential of silver if not fully aware of the manipulation that artificialy lower the price of silver giving investor a chance to buy cheap physical silver ?

PC: The manipulation of the silver price is going to backfire very soon on the short-sellers. Market distortions like this are, however, very difficult to trade because nobody can be sure how, when and why this manipulation will unwind.

On the other hand, it will greatly magnify the upside of silver prices. That is for sure. You can’t keep a commodity below the price it sold at 32 years ago forever. It is simply not possible. What else can you buy at such prices? Silver should be $100 an ounce easily just to be back near its trading range in 1980 or more likely $150.

FDR: Do you think we are going to see a new form of gold standard in the coming years ? Would you be in favor of it and why do you think it’s important to change our current monetary system ?

PC: You do have to ask yourself what happens after the money printers have done their worst? Where are the global central banks taking us? It is not going to be a nice world for many people with high inflation, low economic growth and very poor investment returns. Eventually there has to be a global reset with a default on the debts and a purging of the whole corrupt system.

Gold and silver are both likely to have a role as the two monetary metals. It was only in 1896 that the US Presidential Election was almost entirely fought over the issue of bimetallism – or whether gold and silver, or just gold should be used as a monetary standard. This is not an issue in the current presidential election but I would not be at all surprised if it was a key issue in four years time.

FDR: Thanks for accepting this interview Mr Cooper.