With the rise of the dollar for several months, analysts had their eyes riveted on emerging countries, which risked defaulting on their debts, due to the rise of the greenback and the simultaneous rise in energy. But it was Great Britain, which found itself at the heart of the turmoil at the end of September : 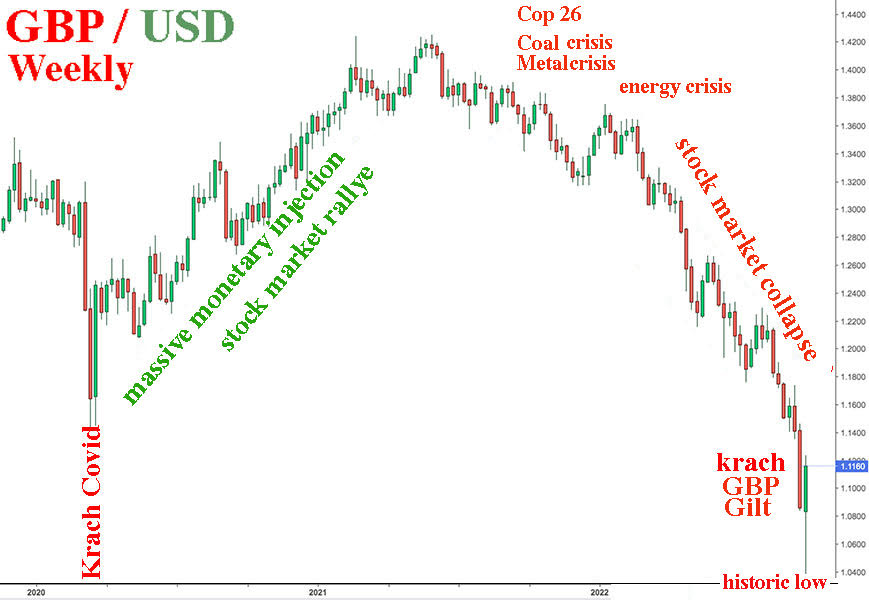 The pound has fluctuated in recent years with the stock market. Since the beginning of the year, the energy crisis, inflation and the rise in interest rates have led to a fall in the stock markets, overinflated by monetary injections. At the same time, these circumstances led to a collapse of the pound sterling against the dollar.

UK Treasury Bonds are called “Gilts” because their paper version was traditionally gold-edged. This materialized the fact that it was a solid and serious investment, even if it was of low return.

During 2022, the value of Gilts fell in parallel with the British Pound. During the last week of September, there was an acceleration in selling and a real collapse, so much so that the Bank of England had to intervene and buy the Gilts massively by printing money, when it had announced a tightening monetary.

At the start of this currency crash, the newly elected British government announced budgetary decisions, which scared off investors.

Basically, pension funds and retirement funds cannot be satisfied with the extremely low rate of Treasury Bonds. To get a better return, fund managers use LDI, leveraged derivatives. The IMF and the BIS have repeatedly warned financiers that while it was easy to get into these derivatives, it could be harder to get out, if everyone is trying to get out at the same time. These LDIs having a leverage effect of x4 or x5, the fall in the Pound and Gilts generated margin calls, multiplying the losses due to the fall in Gilts. So much so that pension funds have been unable to find the cash to meet these margin calls. Technically, these pension funds were therefore bankrupt.

The Bank of England had to intervene urgently, printing en masse to buy back all the British Treasury bonds put on the market.

The City of London is the second largest financial center in the world and Great Britain is the 5th economic power. A collapse of its Treasury bonds is therefore a major financial event.

For several years, the Bank of Japan has been printing money to buy Japanese state debt, which therefore no longer has any intrinsic value.

The yen has lost 40% of its value against the dollar in 2 years, including 27% since the beginning of 2022, despite the massive interventions of the BoJ, selling US Treasury bonds.

If you follow the analyzes of JP Chevallier,  the ECB has been doing accounting cavalry for several year to buy back European debts, while article 123 of the Lisbon Treaty prohibits it from financing the budget deficits of member states (source). What are really worth these European debts, which are the hard core of European banks' capital?

As for the theoretically most liquid market in the world, that of US T-Bonds, buyers have become scarce, to say the least. Japan and China, the biggest holders of US Treasuries, have been sellers in recent months. Due to a lack of foreign buyers, this market no longer has the liquidity that was its strength.

If we look at the chart of the various US Treasury bonds, they are all down sharply.

What happened with the British "Gilts" can happen at any time with the entire bond market, since all pension funds use the same leverage tools (LDI) in order to have a better return. In a falling market, these leverage effects can generate catastrophic margin calls overnight. Like the BoE, the Fed would then be forced to intervene to prevent a total collapse of this market.

The probability of further short-term monetary injections from the Fed is therefore very high.

What makes this 2022 bear market exceptional is that the decline in stocks is simultaneous with the decline in bonds. Generally, when stocks fall, capital switches to bonds. It's been that way for 45 years. But today, this protection no longer works.

The corporate debt market, “corporate” bonds, is also destabilized. For analysts at Bank of America, their Credit Stress Index (CSI) has passed the threshold reached in June and is at the threshold of the critical zone, where the risks of malfunctioning of the credit market increase exponentially (source).

For Bloomberg, the highest-rated companies in the market, "the blue chips", had the worst year in more than 40 years to find credit: 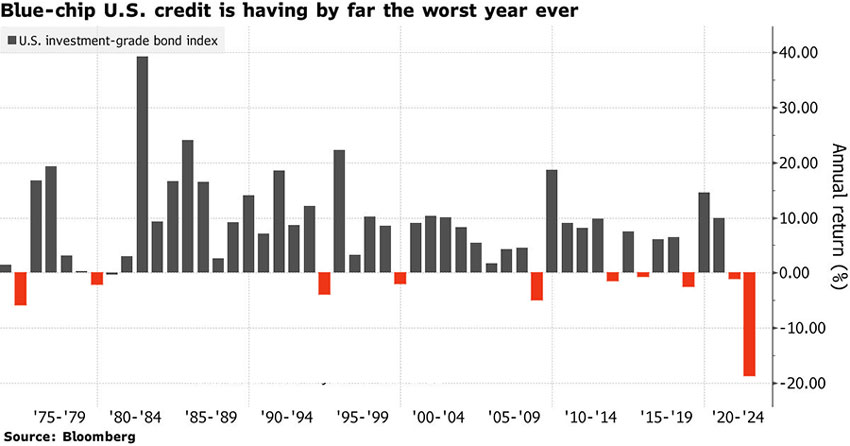 The prices of insurance (CDS) to cover the Credit Suisse bank soared in September, which is a very bad omen.

The share price of this bank collapses, even though it is classified as “systemic”.

Could this be a new Lehman Brothers? 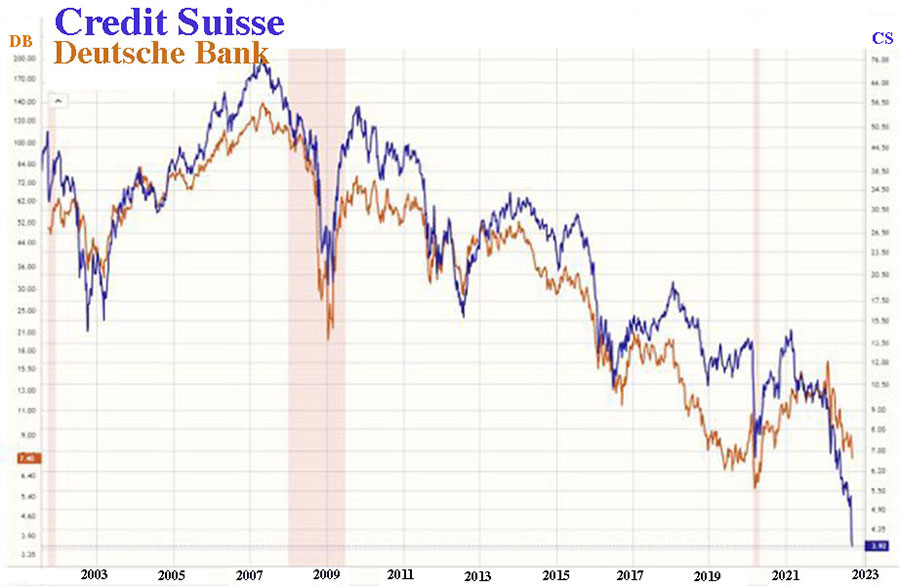 Everyone knows that a fall in the banking system always leads to a domino effect.

The very serious crisis of real estate developers in China continues to cause cascading bankruptcies. It inevitably has repercussions on the Western banking system.

How to protect your savings?

If the equity market is very bearish, the bond market is in a critical situation and the sovereign debt is no longer a safe haven, what is left?

Let's not talk about the housing market, which is hurt by rising mortgage rates and about to fall.

Nor cash, which is being devoured by inflation, which is now in double digits.

There are precious metals, of course!

The Trader Sentiment Index indicated discouragement and over-pessimism among silver traders at the end of September, at the very moment when hedge funds massively bought back their short positions to go “long”. 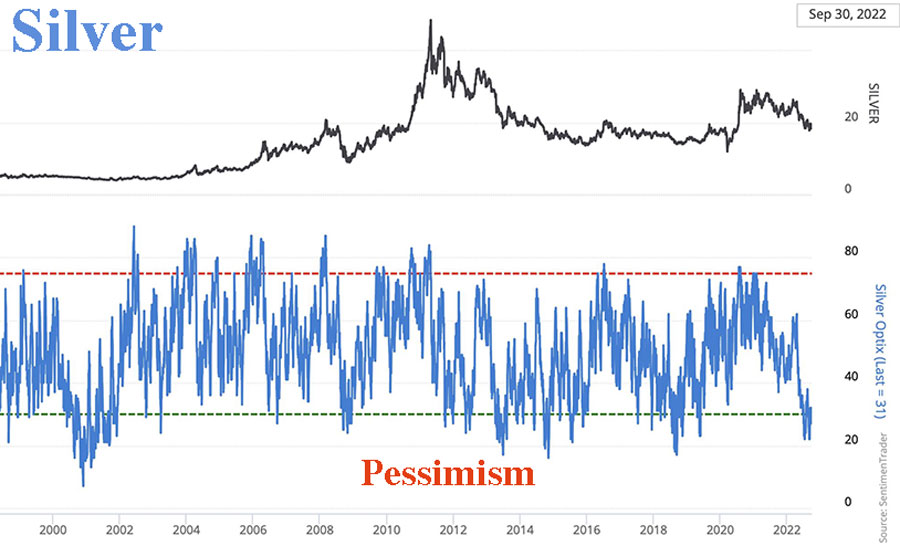 Exceptionally, let's look at the chart of silver in euro. It has the advantage of being extremely clear.

Prices have just made a W or "double bottom" pattern.

The water line (blue) was broken Monday 3/10 with this very nice bullish push of 8.8%, which is exceptional. Silver reached €21.08 tonight.

The logical continuation will be a pull-back on the water line towards €20.06, before a new bullish push towards €22.7 or more.

A pull back should occur in the coming days towards around $19.77, before a new upside push towards at least $22.

When we see the bullish push of the day, it seems reasonable to think that all speculators, who play the trend, the « momentum", will jump on the silver bandwagon, as soon as the pull back on the former resistance has been done. This promises a nice bullish rally.

Technical analysis is one thing, the reality of the markets may turn out to be different, especially in the midst of a systemic crisis, but I am quite confident.

Basically, you should not play with leveraged financial instruments and avoid ETFs. You will only be able to take advantage of the rise with physical silver held outside the banks.

With central banks buying for themselves, India and China accumulating all they can and there has never been so much gold leaving COMEX warehouses, it is strange to see that investors were at the end of September overly pessimistic : 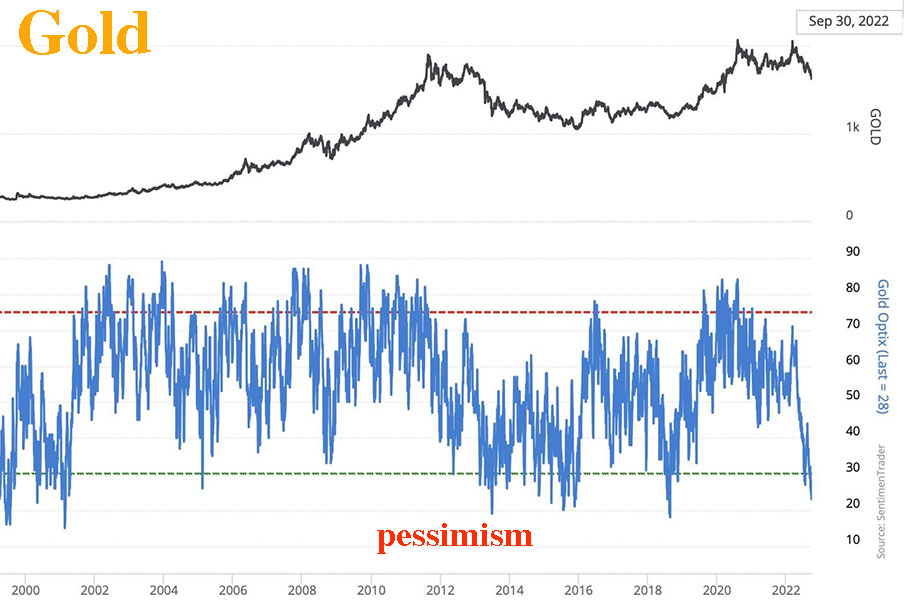 When we see what is happening on the equity and bond markets, we can reasonably think that fund managers will be tempted to invest in gold to preserve their portfolios.

If we pay attention to the COTs, the “commercials hedgers” (the Bullion Banks) have very significantly reduced their “short” positions currently at 61,000 contracts, a level which gives hope for a strong bullish rally.

If we look at the chart of gold in euro, we see that the resistance that has been blocking increases since March 8th was broken at the end of July, then successfully retested on September 15th and September 16th. Since then, prices have risen. On Monday, October 3rd, a strong bullish push broke through the 200-day Moving Average, which was blocking the rise. The road seems open to return to the highs of gold in the euro… but also in all major currencies.

In dollar, you have to look at the monthly chart to see that the resistance has been broken and that prices are now based on the 50-month Moving Average.

Overall, since the banks' reserves are made up of government debt, which will never be repaid and which is losing value every month, the current system is dangerously shaky. The actual double-digit inflation is a sign of the declining purchasing power of money. It is a form of currency devaluation, which is only in its infancy.

Under such global geopolitical conditions, gold should soar to new all-time highs. This can happen in small steps so that the general public does not notice it, or more suddenly, by diverting its attention by some spectacular event, which could happen at any time.

Rest assured, the silver would not be left behind.