Repos : Will the Fed Bring Gold to the Bottom?

Something interesting is happening in the financial markets. As you probably know, the Fed’s reverse repurchase operations have been increasing recently. At the very end of June, their volume almost reached one trillion dollars ($991.9 billion)! It’s a record high, as the chart below shows. 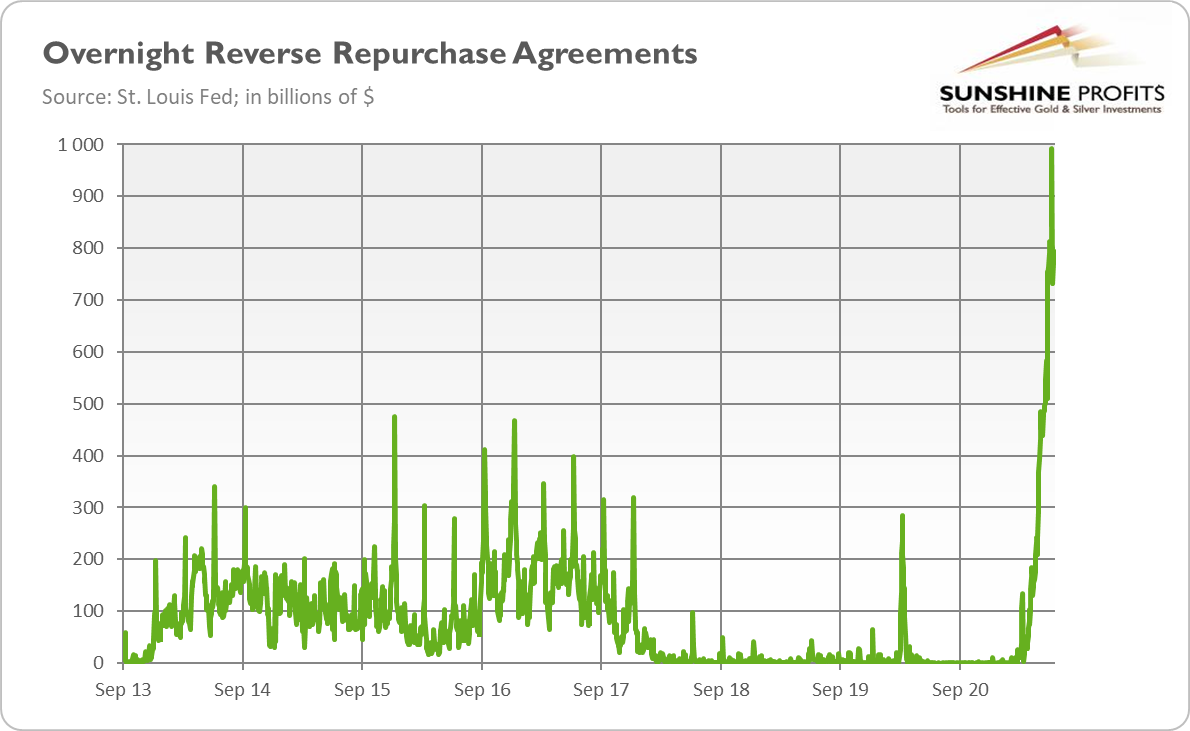 Oh boy, what a spike! What does it mean? Well, when the Fed purchases assets, it injects liquidity into the markets. On the contrary, when the US central bank engages in reverse repurchase operations, it drains liquidity from the markets. This is because reverse repurchase agreements are purchases of securities with the agreement to sell them at a higher price at a specific future date – of course, we refer here to buying and selling from the point of view of financial institutions. They are purchasing assets from the Fed to resell them later, so they basically lend some money to the US central bank.

In other words, the record high volume of repos means that financial institutions pour cash into the Fed like mad. We could say that there is an excessive liquidity problem in the financial markets, so commercial banks and other institutions deposit abundant cash at the Fed (you can think of reverse repos as short-term loans).

So, we have a somewhat paradoxical situation. The Fed is still purchasing assets under its quantitative easing program, injecting liquidity into the financial sphere. However, market participants don’t need this liquidity, so they buy back some assets from the Fed in the form of reverse repo operations. Given that the Fed buys about $120 billion per month in Treasuries and MBS, the reverse repos have already undone more than eight months of QE!

Part of the problem here is the crazy world of negative real interest rates. In such an environment, commercial banks prefer safe, close-to-zero interest rates from the Fed to risking anything in the market. In other words, the bond yields are so low that banks don’t want to deploy funds productively but prefer to hold them safely at the Fed. Such behavior is completely understandable in the world of negative yields, but it will lead to sluggish investment and economic growth. Well, abundant liquidity that becomes a hot potato, as well as slow real growth, sound like positive factors for gold, which likes stagflation-like conditions.

However, the reverse repos are strictly linked to the Fed’s plan to normalize its monetary policy at some point in the future. But hiking the federal funds rate is not simple with such a mammoth balance sheet. You see, the Fed’s balance sheet is simply too big. As the chart below shows, the US central bank’s assets amount to above $8 trillion. 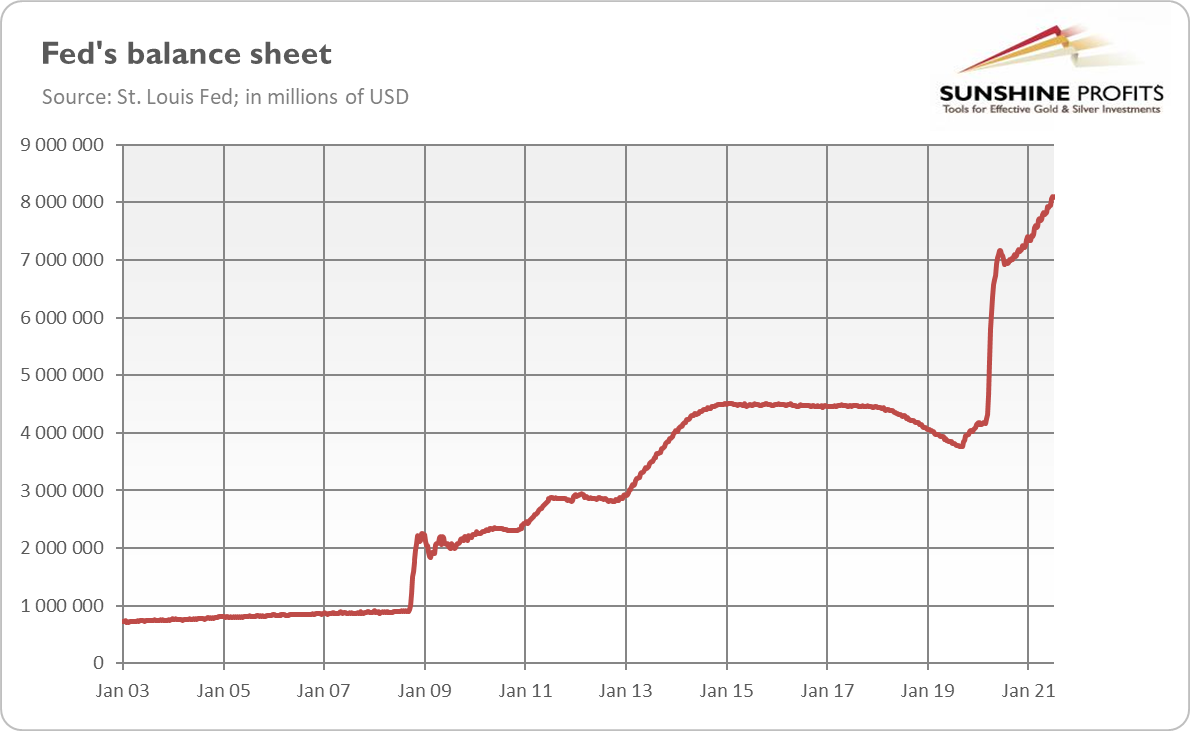 Such a giant balance sheet creates downward pressure on the interest rates. If left alone, they could even drop below zero. This is why the Fed started the overnight repurchase operations – to drain some excessive liquidity from the markets in order to regain control over the interest rates. So, the current developments in the repo market are a strong signal that the Fed is preparing for raising the interest rates. Actually, the Fed has already lifted its repo rate from 0% to 0.05%, allegedly as a technical adjustment. This is a fundamentally negative factor for the gold market.

Nonetheless, gold bulls may find comfort in the fact that it’s not easy to return to normalcy. Remember the Fed’s previous attempt to normalize its monetary policy? The US central bank had to reverse its course in 2019, just two years after starting the balance sheet’s reduction. It turned out that quantitative tightening was too harsh for fragile financial markets, and the Fed had to pump liquidity again (in the form of repo operations), as well as cut the interest rates – even before the pandemic and the following economic crisis started. Similarly, by paying trillions in reverse repos at 0.05% now, the Fed makes them more attractive, planting the seeds of the next liquidity crisis.

In other words, the Fed’s tightening cycle practically always ended up in a recession. Moreover, there were many indicators that the recession would take place in 2020 or 2021 anyway, even without the coronavirus and the Great Lockdown. So, this time won’t be different. Well, actually, it could be different –in such a way that the next recession will be accompanied by higher inflation. If stagflation really occurs, gold will shine as it did in the 1970s.