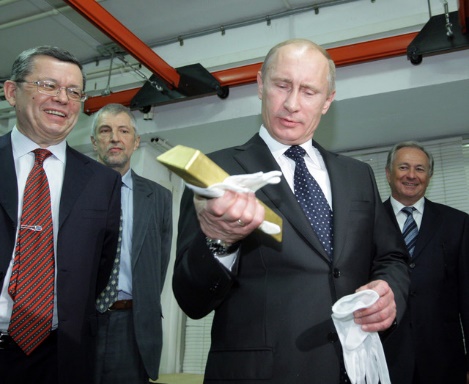 The 2008 financial crisis marks the return of gold into the international monetary system. It is also the beginning of currency wars. 2008 is also the year central banks stopped selling gold reserves and instead started buying. In this currency wars that will lead to a reset of the international monetary system, five countries will play a major role but each in a different way. The two largest players on opposite side are the United States and China. The US is the only anti gold player and China the largest pro gold player. However, Russia also has made gold a major weapon against the US and especially since the West, under US leadership, imposed financial and economic sanctions on Russia. The two other major players, because of large ownership of gold and a much more pro gold attitude, are the European Union/Euro Area and India (private ownership in India is a lot larger than official gold reserves). 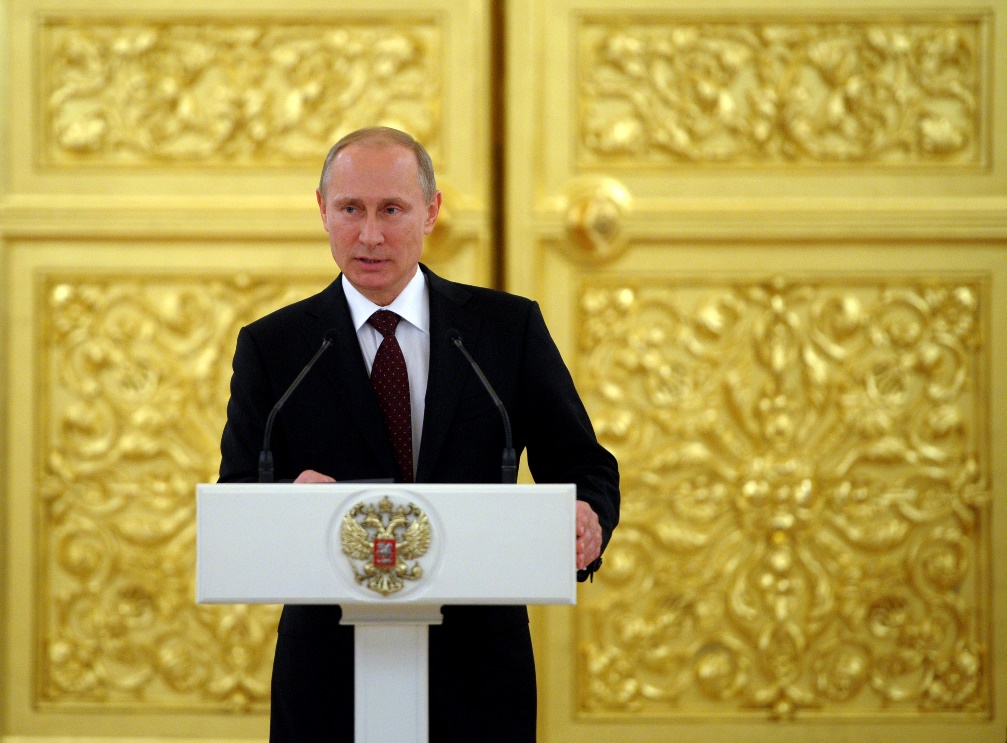 Symbolism and images play a very important role in geopolitics and as they say a “picture is worth a thousand words”. It’s not usual to see in such an open fashion a world leader show himself intentionally with a gold bar as we have seen recently both the president of Russia Vladimir Putin and his prime minister Dmitry Medvedev.

At the 2009 G8 gathering in Aquila, Italy, then Russian President and now Vice President Dimitry Medvedev showed reporters an example of a gold coin of a supranational currency, which he called a "united future world currency". The Royal Mint of Belgium created the coin and a special gold edition was presented as a gift to the G8 world leaders. Only President Medvedev was more than happy to appear in front of the media holding one. 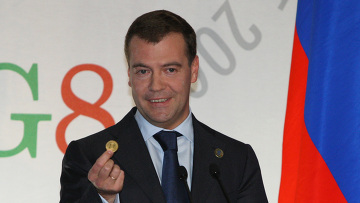 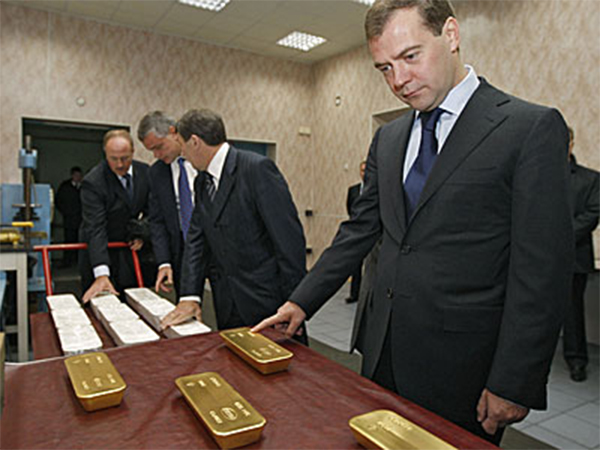 The golden symbol of the central bank of Russia is also no coincidence in my opinion. Russian bullion expert Dmitriy Balkovskiy said that, “Elvira Nabiullina, Putin’s recent appointee at the Bank of Russia, is familiar with Ludwig von Mises and is well known in Moscow’s libertarian circles” (von Meses and libertarian circles are pro gold). 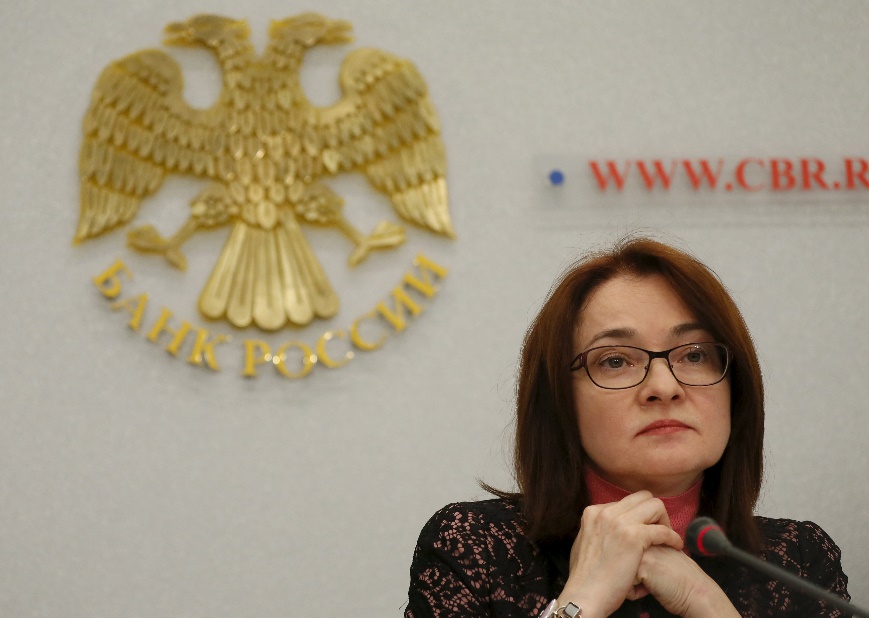 Elvira Nabiullina, president of the Russian Central Bank said in 2015 that, “Recent experiences forced us to reconsider some of our ideas about sufficient and comfortable levels of gold reserves.” Also in a recent CNBC interview, Ms. Nabiullina remarked on Russia’s increasing gold reserves saying, “We base ourselves upon the principles of diversification of our international reserves and we bought gold not only last year but during the previous years. Our gold mining industry is very well developed and it is ready to supply gold.” Dmitry Tulin, who manages monetary policy at the Central Bank of Russia said recently that "The price of it (gold) swings, but on the other hand it is a 100 percent guarantee from legal and political risks" and that Russia is boosting gold holdings as defense against “political risks”.

Russia’s President Vladimir Putin said in 2011, "They [US] are living beyond their means and shifting a part of the weight of their problems to the world economy… They [US] are living like parasites off the global economy and their monopoly of the dollar." He also recently told foreign journalists at the St. Petersburg Economic Forum 2014 "For us [Russia and China] it is important to deposit those [gold and currency reserves] in a rational and secure way, … and we [China and Russia] together need to think of how to do that keeping in mind the uneasy situation in the global economy." While Evgeny Fedorov, lawmaker for Putin’s United Russia party in the lower house of parliament, said “The more gold a country has, the more sovereignty it will have if there’s a cataclysm with the dollar, the euro, the pound or any other reserve currency.”

With the help of a few charts let’s analyses Russia’s actions in the gold market since 2008. For comparative purposes I chose to compare the five major players in official gold reserves (US, EU, Russia, China and India) and two small, one developed and the other developing countries, but interesting cases: Switzerland and Lebanon.  The chart below shows clearly that the gold accumulation by Russia for its foreign exchange reserves started during the 2008 crisis. From just 400 tonnes Russia more than quadrupled its gold holdings in the last seven years. 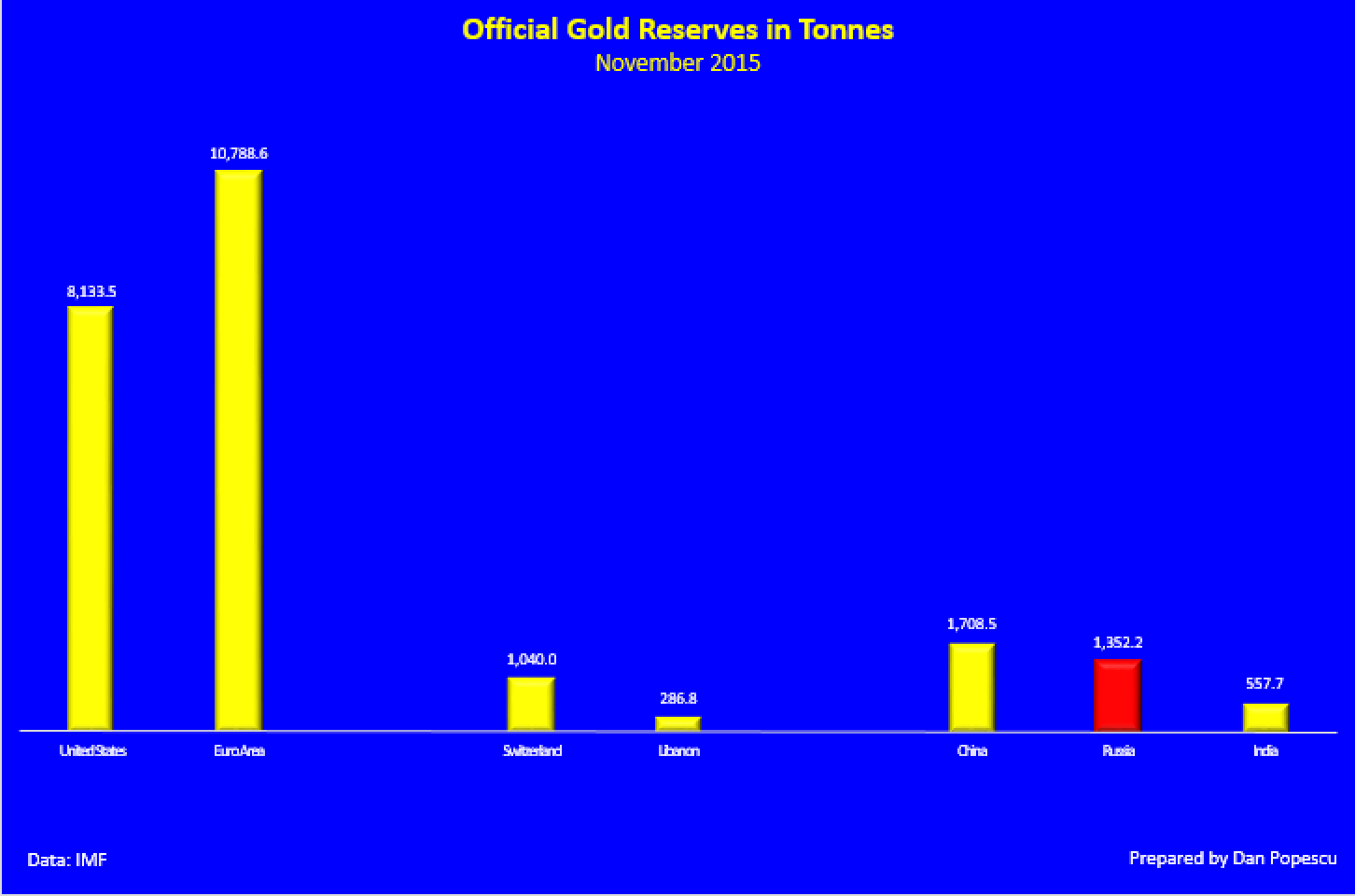 According to Julian D. W. Phillips, Gold Forecaster, Vladimir Putin during his first mandate as President Vladimir Putin instructed that Russia hold 10% of its reserves in gold. As you can observe in the chart below Bank of Russia has achieved this objective and holds now 13.1% of its foreign exchange reserves in gold and is continuing to buy. 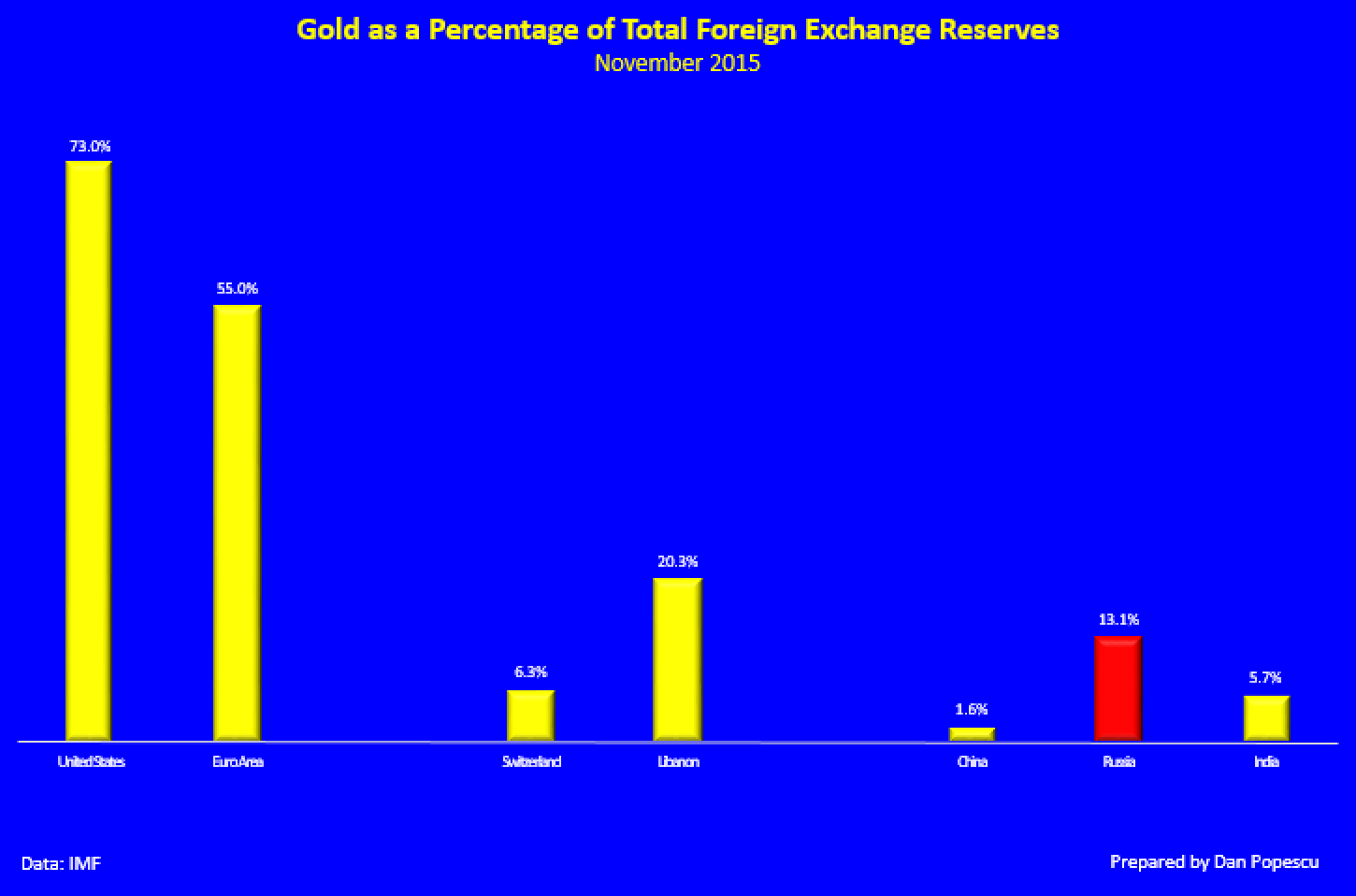 The next chart shows clearly that the trend of converting currency reserves into gold reserves started in 2008 with the trend even accelerating since Western sanctions were imposed on Russia in 2014. 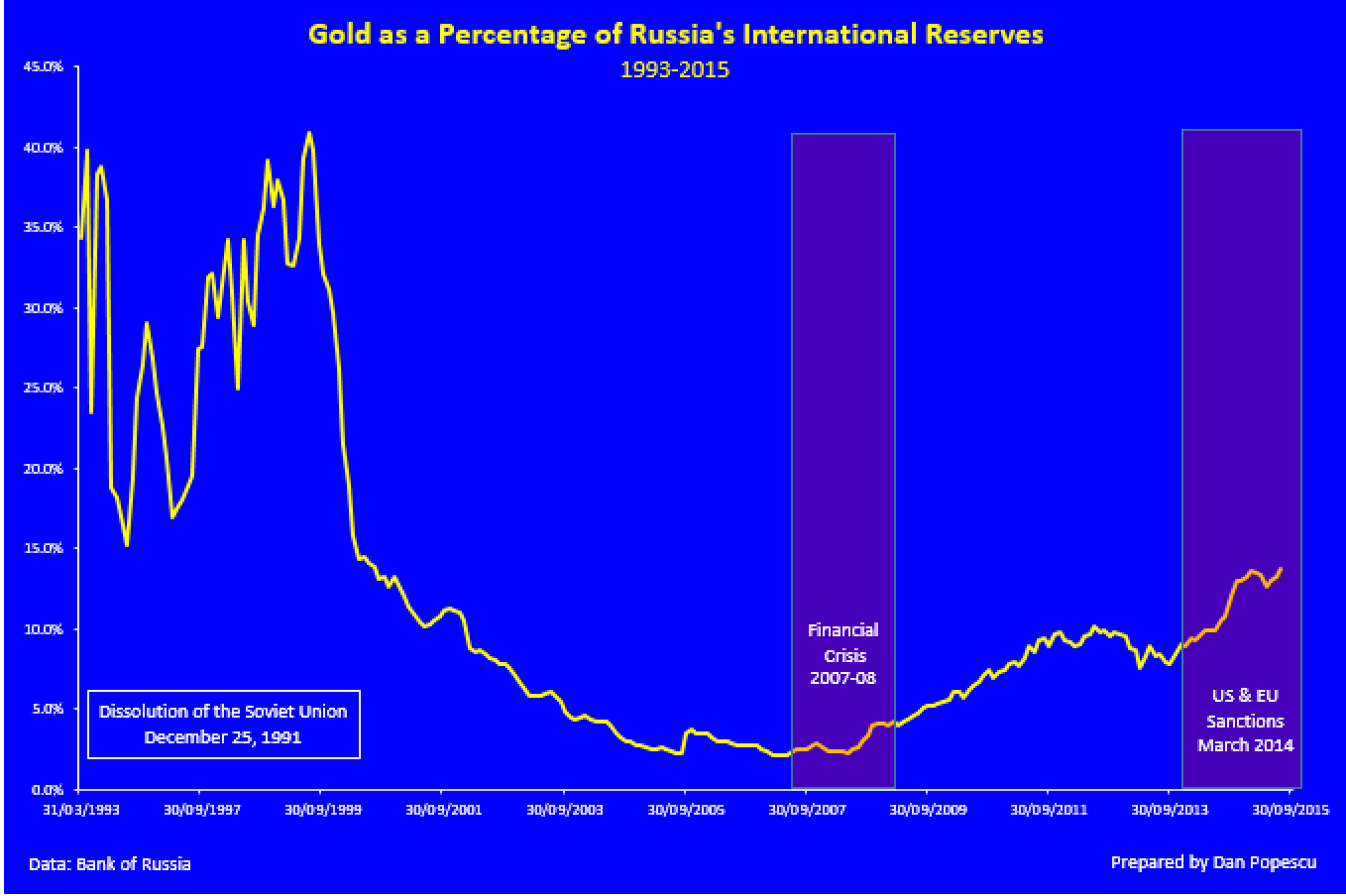 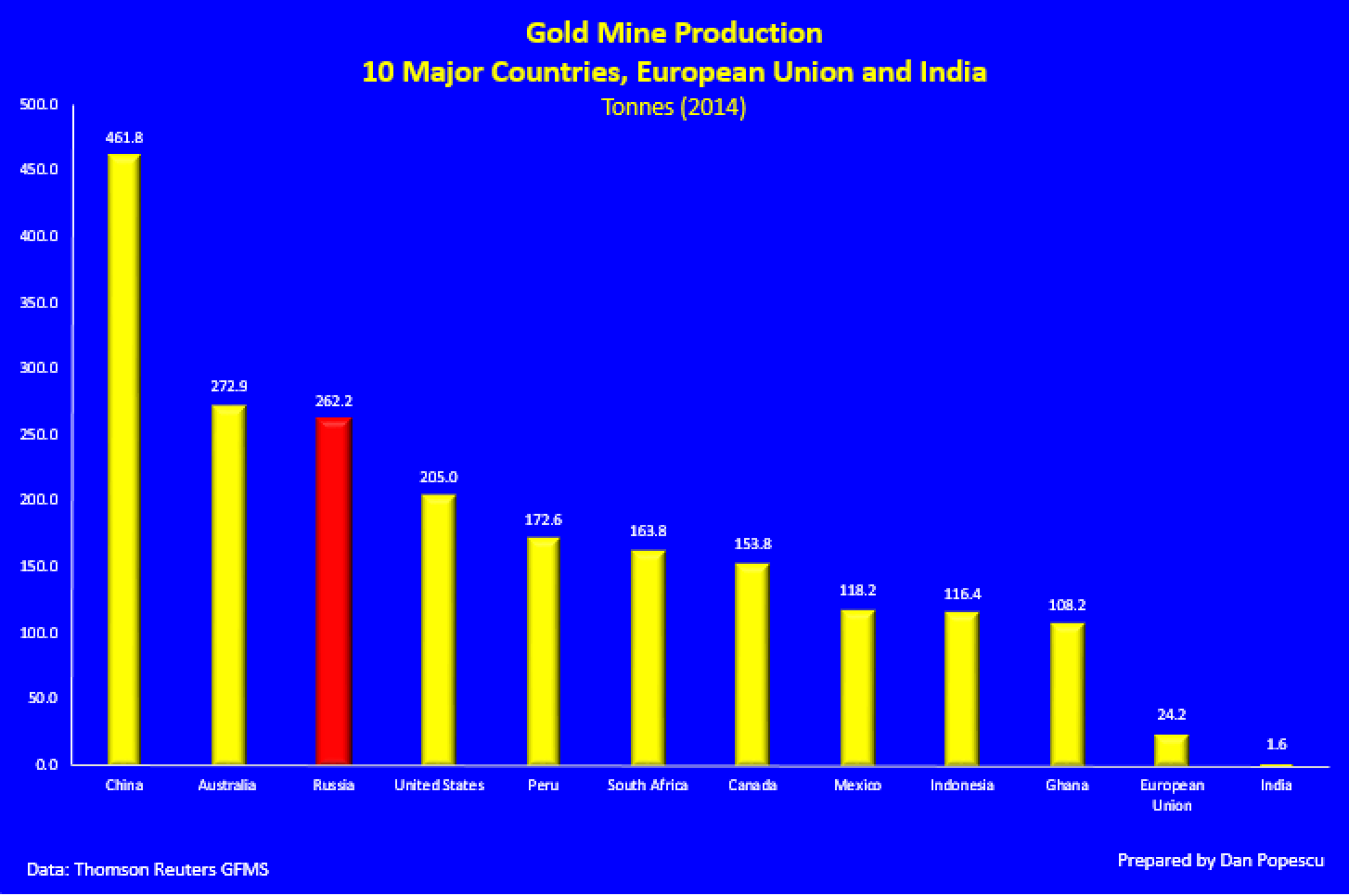 In the chart below we can clearly see that Russia has increased its gold mining production constantly since the collapse of the Soviet Union. 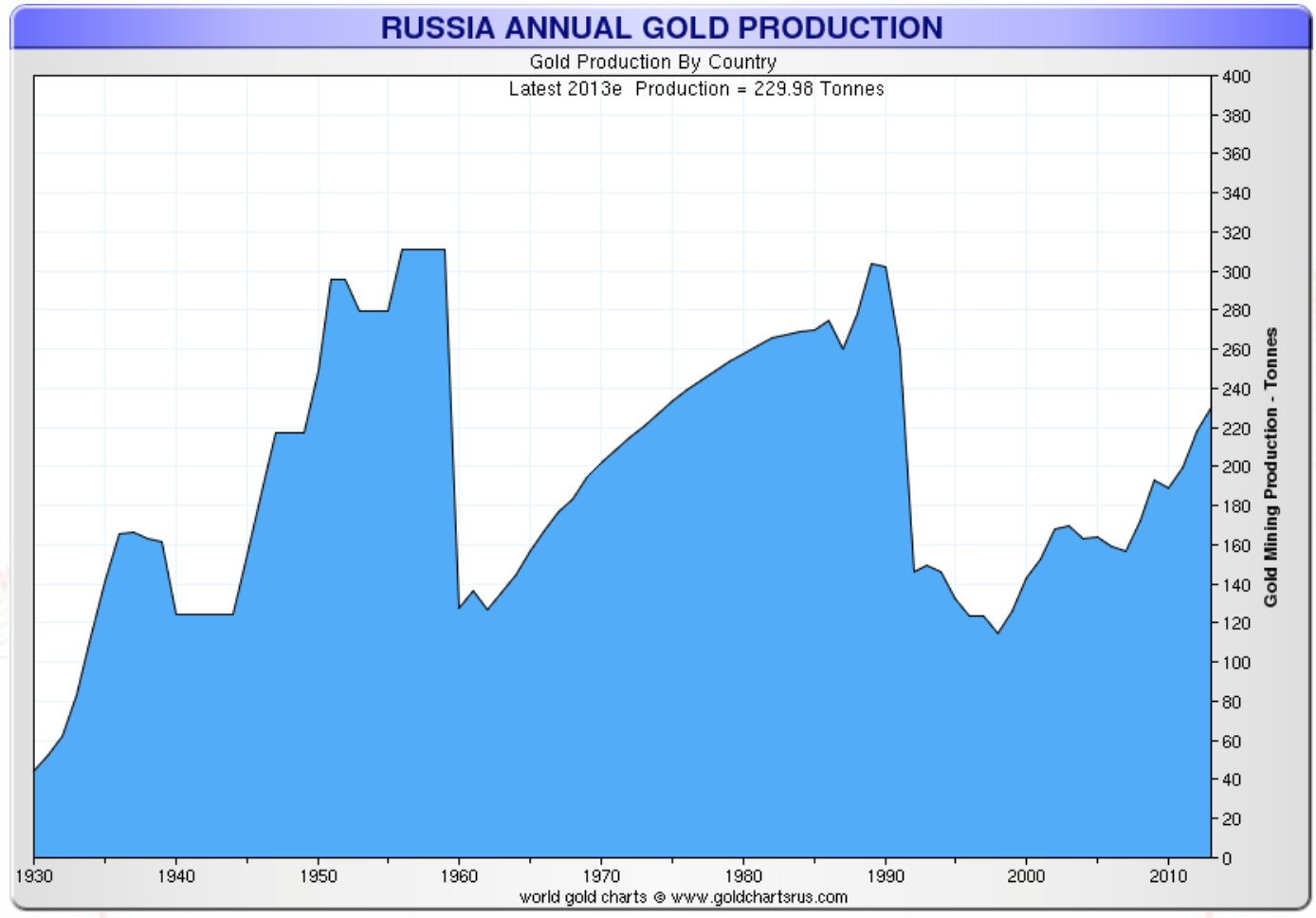 If we look now at the official gold reserves as a percentage of GDP we can see that Russia has passed the US and is now in second place behind the Euro Area in the group of the major five players in the international monetary system with 2.8% vs the US with 1.8% and the Euro Area in first place with 3.2%. 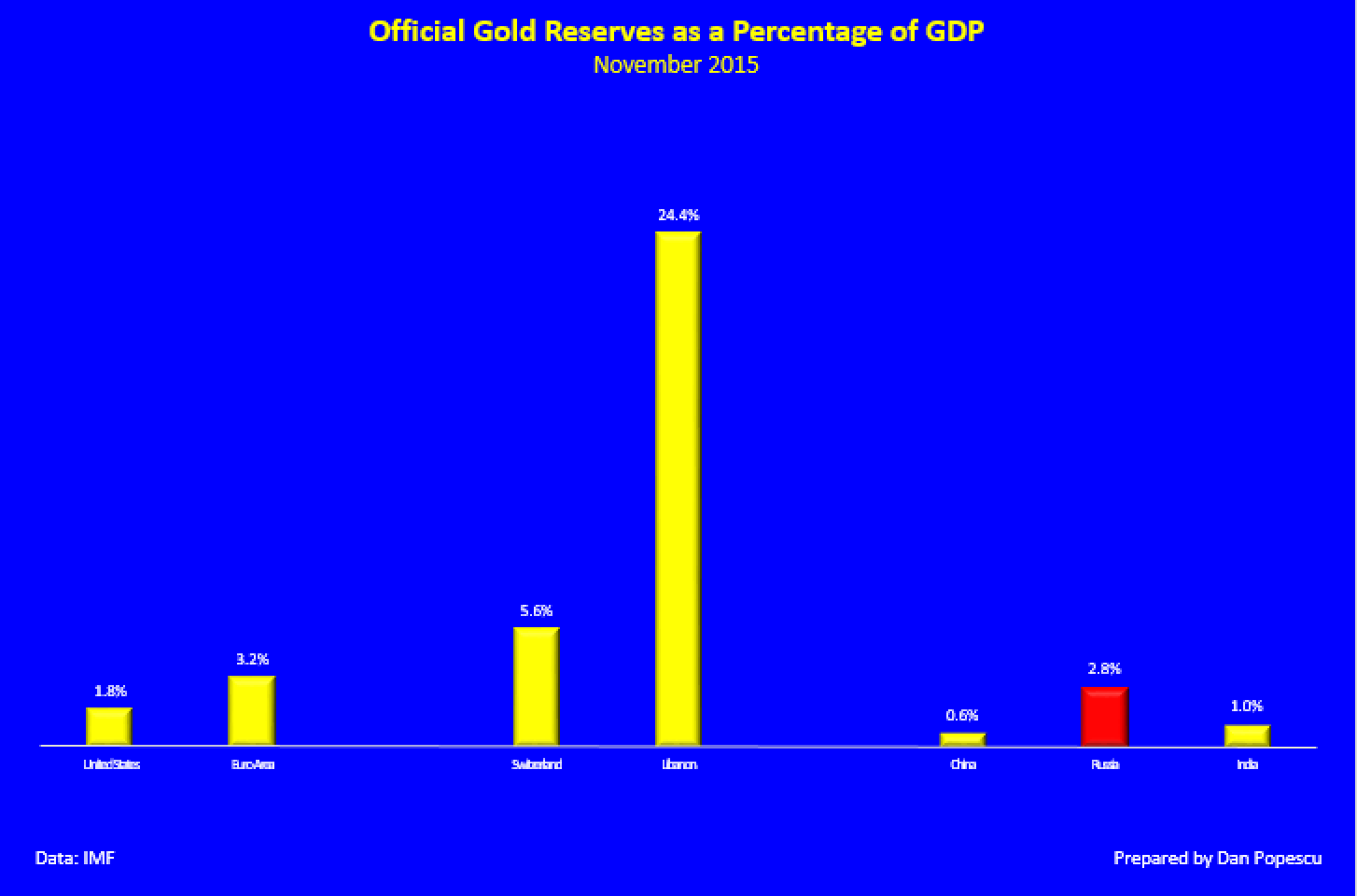 However, if we look at the gold reserves from a different angle, we can see Russia in third place on a gold reserves per capita bases with 9.5% far behind the US and Euro Area. 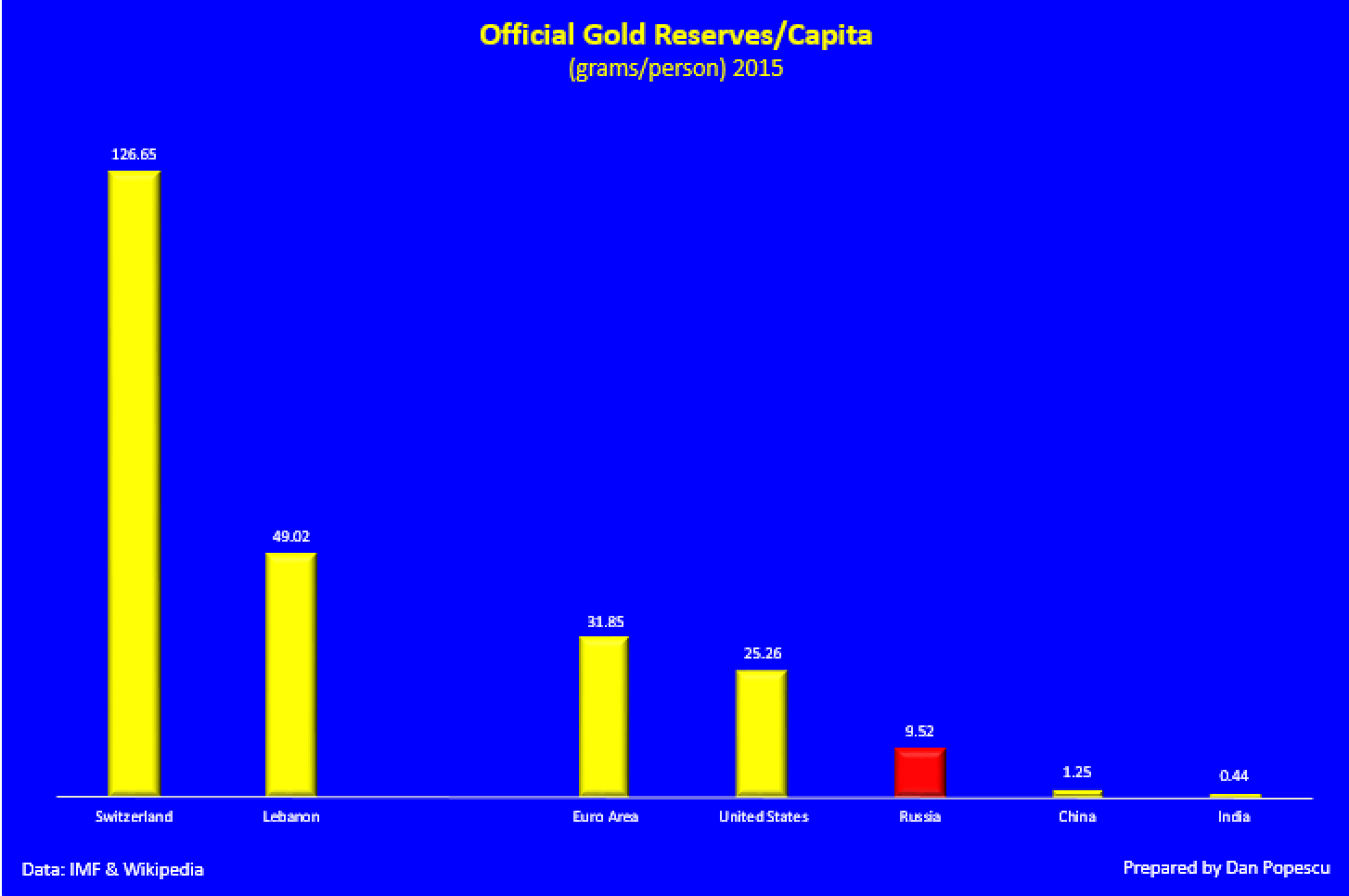 Based on recent research it is my strong hypothesis that China, Russia and India are targeting the US and EU holdings which are between 8,000 and 11,000 tonnes. I conclude that Russia but also China and India are working to join the “gold 9000 club”. 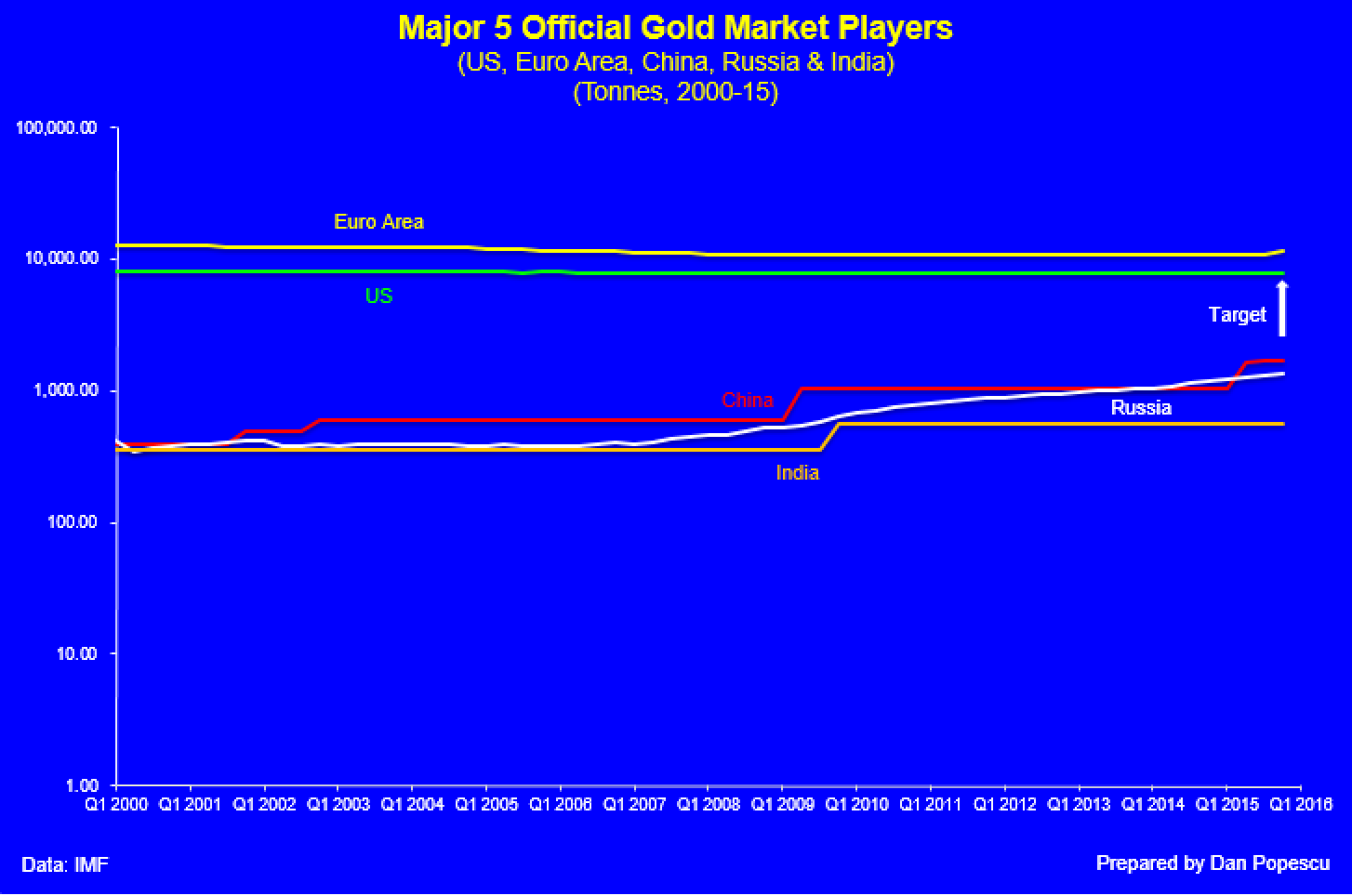 All that being said I have to caution you that those figures are highly contested. Both China and Russia could have a lot more gold under state control but under a different institutional ownership waiting for the right time to be transferred to the central bank. China did it in 2008 and 2015 and Saudi Arabia did it in 2007 when suddenly just by an accounting transfer they announced a sudden and large increase of official gold reserves. China buys its gold reserves through the State Administration of Foreign Exchange (SAFE) and the China Investment Corporation (CIC) and Russia through Gokhran. This game of financial shenanigans of here you see it, here you don’t is not played only by China and Russia but also by the US between the Treasury Department, the Fed and the Exchange Stabilization Fund (ESF).

I expect the currency wars to intensify this year and both China and Russia to play a major role in it. Both made gold an important instrument in their war on the “hegemon” as the Chinese like to call the US dollar. Strong collaboration between Russia and China has substantially increased last year in many sectors including gold. I would not be surprised to hear that they collaborate in respect to official gold reserves but for now it’s all speculation from my part. China will start its Yuan Gold Fix in April based on metric gold measurements and I expect Russia to join in. Moscow exchange launched its first precious metals trading in 2015. The Moscow stock exchange plans to transport precious metals from production companies, keep them in its own stores and deliver to the buyer the next day.

It is evident to me that Russia and China use gold to dethrone the US dollar from its “hegemon” position and take away its “exorbitant privilege”. Will it be this year? The Russians are impatient while the Chinese are very patient. Events out of their control could however accelerate the process and force an international monetary system reset sooner and not as smoothly as China might want. I hear often, and to my surprise from highly educated people, that neither China or Russia will dare to sell their US treasuries and the dollar or link their currencies to gold. What they ignore intentionally or by ignorance is that history is full of so called illogical anti-textbook economic policy decisions by world leaders including in the US.

In this new cold war, treasury wars, currency wars, gold wars, etc. anything is possible. The idea that they wouldn’t dare sell treasuries and the dollar, is maybe valid in theory but not in reality. Accumulation of gold both by Russia and China is not innocent. It is done with a very good and well thought objective to eliminate the dollar’s “exorbitant privilege”. Their biggest ally is the US itself through its state of denial of its gigantic debt and deficit problem. Will it work? We will see, and I think sooner rather than later. For now, I think Russia has succeeded to substantially diminish the negative effects of Western sanctions, has avoided international isolation and its gold strategy is well executed at least until now by buying at low prices. Russia has a low public debt to GDP ratio of 18.4% and according to John Butler, author of The Golden Revolution and the Amphora Report “at current market prices Russia’s gold reserves would back a whoppling 27% of the narrow ruble money supply”. 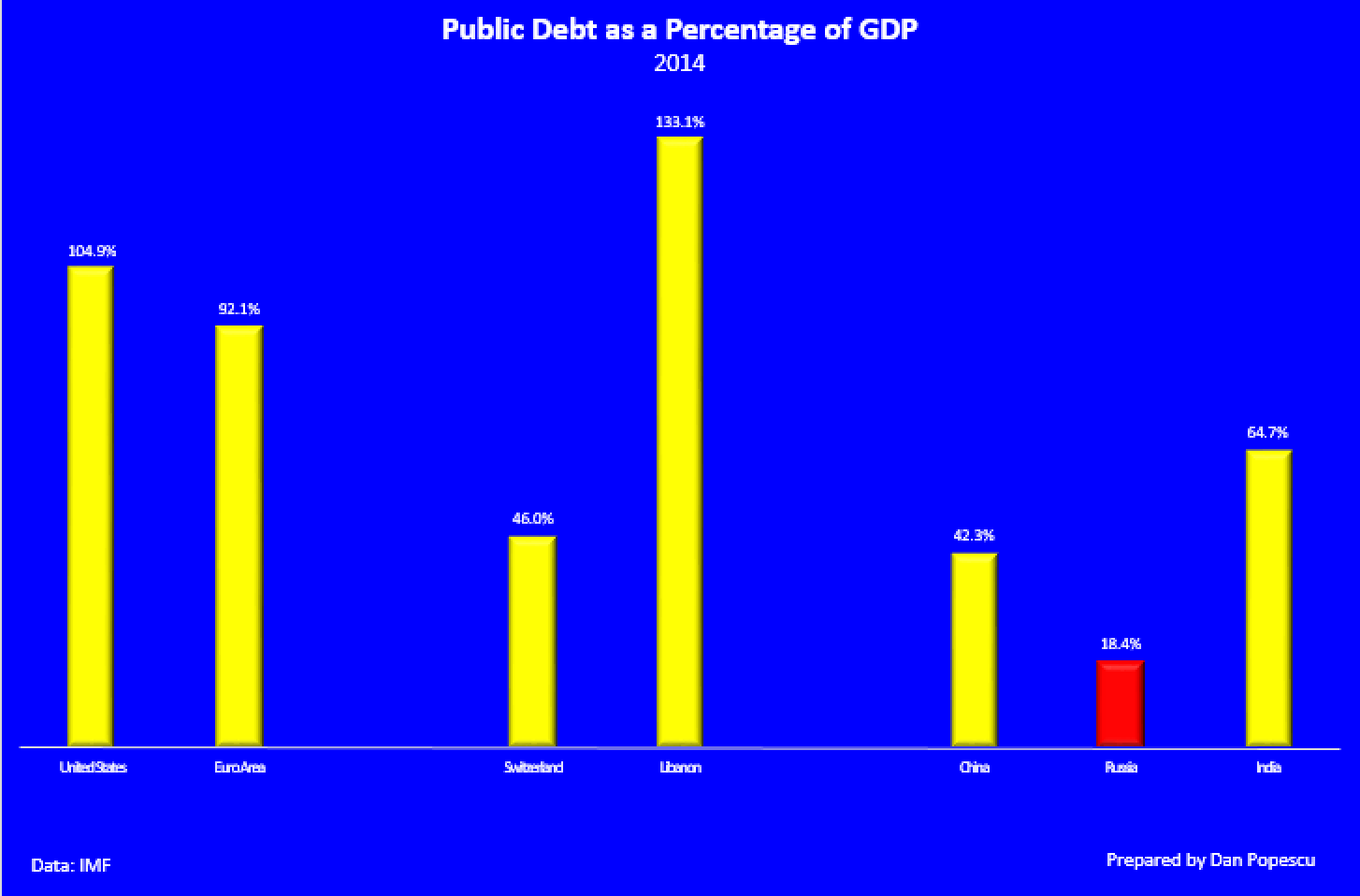 Russian bullion expert Dmitriy Balkovskiy says, “The old Soviet Union viewed gold and silver as strategic metals and a matter of national security” and based on recent statements, public images and also actions, Russia today does it too.