In 1965, President Johnson decided to stop using silver coins. Here is his speech of the 23rd of July 1965:

“Now, all of you know these changes are necessary for a very simple reason: silver is a scarce material. Our uses of silver are growing as our population and our economy grows. The hard fact is that silver consumption is now more than double new silver production each year. So, in the face of this worldwide shortage of silver, and our rapidly growing need for coins, the only really prudent course was to reduce our dependence upon silver for making our coins."

In 2017, investment in silver (physical bar, coin purchase and ETF) fell by 40%. In value terms, annual identifiable investment was worth $2.6 billion for the whole year.

In the first 6 months of 2018, investments just in silver physical bars jumped to 27.3 billion dollar. In such a small market, it is an explosive information.

The silver price is still under $16 today, but it won’t last long at that level. With an open interest around 1 billion ounces on the COMEX, there will be a huge SHORT-SQUEEZE before the end of the year.

Nevertheless, for more than 50 years, silver demand has been stronger than supply and the silver market is in an almost permanent deficit (see the red line in the table underneath). 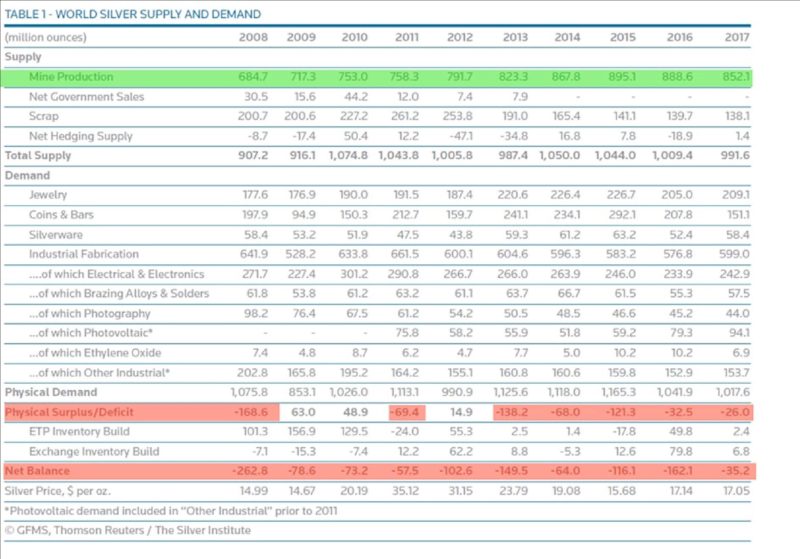 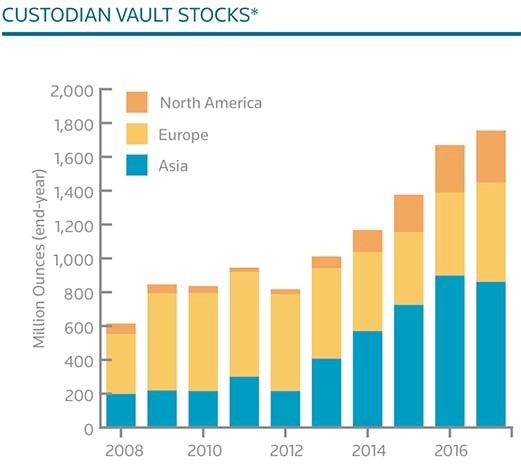 The stocks of the different occidental ETFs are about 669 Moz of silver bought on behalf of investors. SLV is supposed to hold 329 Moz. 113 Moz in NY under the custodian of JPM 216 Moz in London vaults (see list). 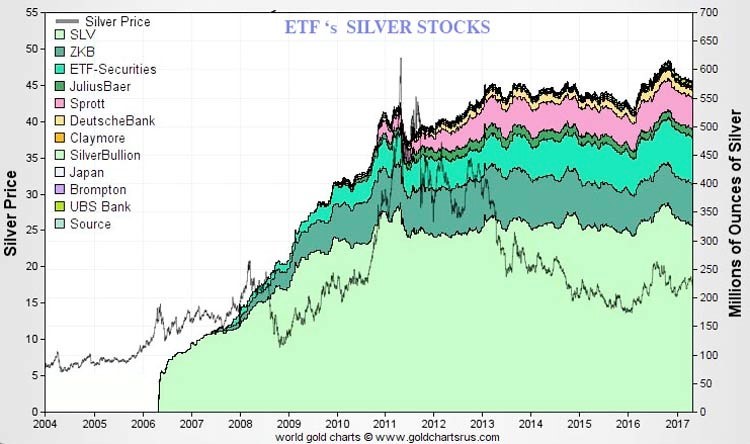 After the Washington G20 in November 2008 and the willingness expressed by the concert of nations to change the monetary system, Chinese banks had offered their customers to keep their cash in either Yuan or gold or silver via ETFs. This means that every Chinese bank has a stock of gold and silver. Unlike in the West, these Chinese ETFs are officially supervised by the Chinese Central Bank.

Xia Bin, one of the leaders of the Chinese Central Bank, said in an interview with China Daily in January 2011: "China needs to strengthen its gold and silver reserves".

China has now a reserve of silver, but whose exact weight is not revealed.

Last year the LBMA promised to publish gold and silver stocks the first day of each month. The last time they did it was in may 2018.At that time, in their warehouses, there was 33,918 tons of silver (source). This includes the SLV silver stock for about 6,123 tons.

In COMEX warehouses, there are 203 Moz eligible (not for sale) and 80 Moz registered (for sale at a price defined by the seller).

This listed inventory represents only 283 Moz which include JPM's 144 Moz, which could be intended for the US Treasury... and perhaps to be restituted from a lease to China, in fine. 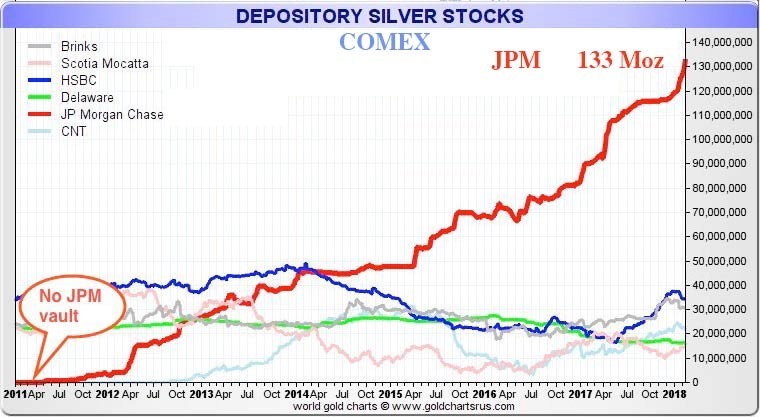 On the COMEX, traditionally, there are very few silver deliveries :

This represents 31.4% of COMEX’s deliveries.

The COMEX therefore delivers only 47.8 Moz per year or 23.9 Moz per semester.

Since the beginning of 2018, the COMEX has transmitted to London its delivery obligations in the form of EFP (Exchange Futures for Physical).

These delivery requests in the first half of 2018 represent 45 times the semi-annual normal at the COMEX (or 69 times the normal without JPM stack).

In 2017 silver mine production had been less than 22,500 tons. These delivery requests represent more than twice the 2017 production and it is concentrated on only 7 months! If this continues, at the end of the year, there will be a delivery request for 4 years of production.

As the mine supply of silver has been in "just-in-time" production for decades, it is almost impossible to deliver such a huge quantity without destabilizing the market.

If there are only 24,795 tons of silver to sell in the LBMA warehouses, how could they deliver 51,596 tons? 26,801 tons are missing that represents more than a year of mine production.

A big move is to come.