Are the Iranians Selling their Gas for an Asset (Gold) in a Bubble ?

Turkey has admitted last Friday (Nov.23, 2012) that the increase in its gold exportations is related in reality to the payment of gas imported from Iran.

Thus Iran gets around the Western countries- imposed sanctions regarding its nuclear program. Those sanctions aim to isolate Iran from the international banking system by preventing it from trading with its commercial partners. 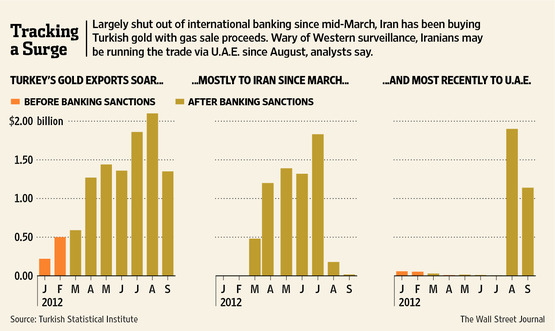 - Iran provides 18% of the natural gas and 58% of the oil consumed by Turkey.

Turkey cannot function without a provider like Iran, so it uses gold as a trade currency.

(In reality, Turkey pays Iran with Turkish lira, and Iran uses the lira to buy gold from Turkey. Since the Turkish lira has no international appeal, what Iran aims to do is to acquire gold.)

Some tensions may develop between Turkey and the Western countries for non-compliance with the sanctions imposed on Iran, but it’s the role of the dollar as the world reserve currency that is being questioned again.

The fact that many essential commodities like oil and gas are traded in dollars automatically creates a demand for them which helps sustain their value and the trust in them.

As a reminder, one must first buy dollars in order to buy oil or gas.

But, as we’ve been seeing the last few months, many countries (mainly the BRICs) are doing away with the dollar when trading together, which is irking the USA.

And we can understand why since the dollar, the world’s reserve currency, is not playing its role of maintaining value as the FED keeps printing billions of them every month (at least $40B/month since Q3).

In fact, since the beginning of the 20th century, the dollar has lost 98% of its purchasing power. It’s not a new phenomenon, but it’s accelerating since 2008.

So, progressively, gold is regaining its international currency status, since it is not tied to any particular governmental  interest and has shown for millenia its capacity of maintaining its value.

Therefore, one could logically ask if Iran would agree to receive as payment for its natural gas an asset (gold) which is constantly presented in the mass media as being in a bubble ?

We can answer this question quickly just by observing the actions of China, Brazil and Russia these last years.
The « barbarous relic » has been strongly coming back on the international financial scene for many months while the mainstream media is totally silent about it.

Act now to protect your wealth accordingly, because the dollar debasement will disastrously affect the value of all other paper currencies in circulation. All of the countries’ « reserves » are mostly in dollars... but they are progressively being replaced by physical gold and silver.

Gold is not going up... the paper money value is going down.

Fabrice Drouin Ristori is a French investor and entrepreneur who has been a specialist of the gold and silver markets since 2008. He is the CEO of GoldBroker.com, which he founded in 2011.