The accurate measurement of inflation is particularly important in the current period. Prices are slipping at levels not seen in decades. Households and businesses need to have the best possible perception of this in order to adjust their behavior. Unfortunately, national statistical institutes tend to underestimate the rise in prices in order to keep up appearances, to the benefit of the state, a large part of whose spending, especially social spending, is indexed to price changes. We have already explained how INSEE underestimates the real increase in prices in France, by practically excluding housing, which accounts for only 6% of the "household shopping basket", and by inventing a very fictitious "quality effect".

In this period of strong price increases, another element is distorting this measure: the weighting effect. The consumer price index (CPI) is based on an average basket that is supposed to represent all French people, the "household shopping basket". But it is important to note - and this is the key subtlety - that the composition and weight of the various products in this basket are only modified once a year. There is therefore a significant delay effect. As this methodological memo explains, INSEE takes the weights of "Y-2, valued at the prices of December of year Y-1 and possibly supplemented by volume corrections between year Y-2 and Y-1 [which was done to account for the health crisis, but quite imperfectly]." When it comes to drowning out the fish, you can count on our national institute.

At the moment, the French are tightening their belts to fill up their cars, pay for gas or fuel oil for heating, and electricity (which is only increasing by 4% this year thanks to the tariff shield). The "energy" category suddenly increases in their budget, but this is not reflected in the CPI, which keeps the same weighting for it: 8.86% in July 2022, after 8.08% in July 2020, 7.48% in July 2017, 8.68% in July 2012; we are still in the historical trend. The same goes for food, which has also been hit hard by price increases. 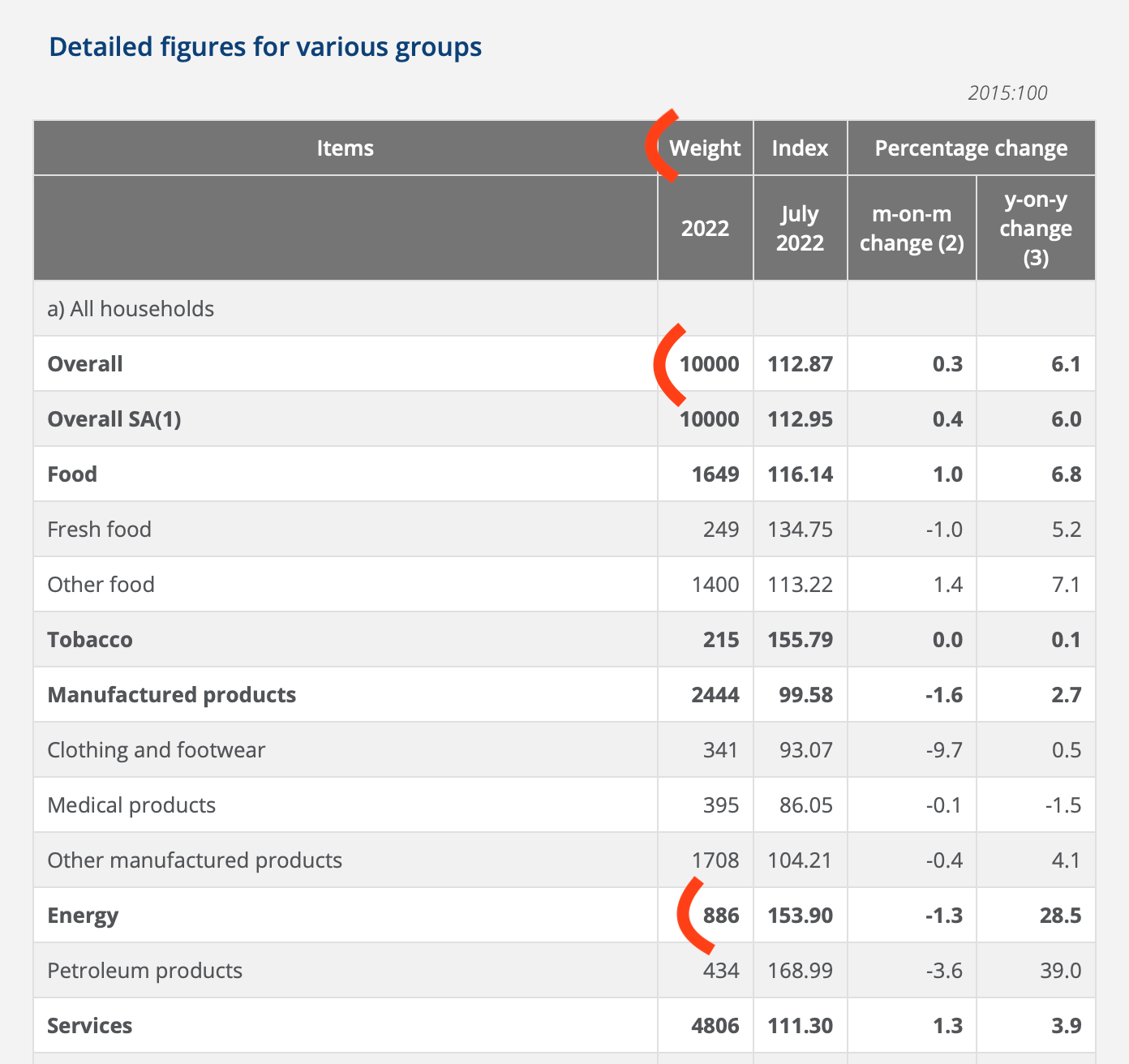 We have a weighting that dates back to the "world before" and that does not correspond to the reality in which the French live. We witnessed the same phenomenon in 2020, during the lockdowns: fuel and transport prices were falling, but households were not benefiting from it because they were locked in or under curfew! However, inflation was very low, while food expenses increased (more meals at school or at work) without this additional cost being visible.

This weighting, which adapts far too slowly, and the delay effect it implies, is proving to be very practical in cushioning strong price increases, the inflation peaks, on the back of the consumer. Of course, if the rise in energy and food prices continues next year (which is more than likely), INSEE will have to change its weighting (in the secrecy of its offices, as the transparency of the public body is close to zero), but that leaves time, including to find other subterfuges. It is probably too much to ask INSEE to adapt its basket every month or quarter...

As a result, real inflation is showing up at a much higher rate than officially reported. We suspected it, the current so-called 6% annual inflation is just a joke.