As I announced it at the end of June, after again a touch-down on its very long-term support, silver started its third leg up.

Each rising leg is marked by the crossing upward of a Fibonacci’s fan, which is an oblique resistance coming from the top (see my article here). It has to be followed by a pull-back on this resistance before attacking the next one.

The last pull-back was extremely long, bringing the silver prices back on the very long-term support, which goes back to 1995 if not more. 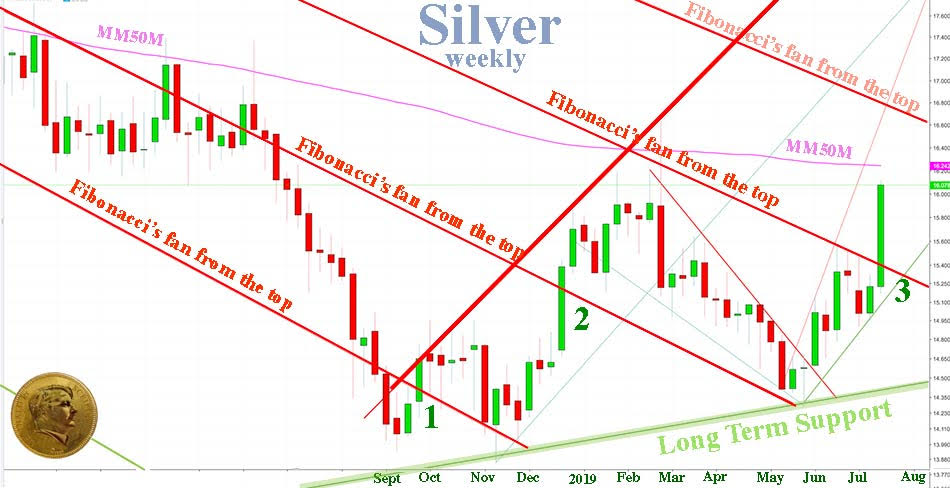 The June-July surge, after an accumulation phase under the Fibonacci fan, finally broke through, bringing a nice upward candlestick.

This third leg of this rally is limited by a resistance, which blocked the prices in May, June and July (thin red line). It will certainly serve again. This resistance is this week around $ 16.5 and $ 16.7 next week, where it will be in contact with the next Fibonacci’s fan.

If this chart exposes nearly 2 years of the silver trade, it is to show that then 50 months Moving Average (pink) has been the major resistance since 2016. The price could rise higher in the daily sessions, but all the weekly closes had been under this resistance (but one). It corresponds to the MM225W if you want to position it on your own chart.

As the price have broken the third Fibonacci’s fan, the prices will have to come back down to make a pull-back. As we have, unfortunately, suffered these last 6 months, a pull-back could be very long.

In the worst case, it could drag up to resume support on the very long term support to 14.69 in November, but it seems more likely, that the horizontal support at $ 15 will shorten our suffering, and that of even more so, that, statistically, silver usually knows a bullish push upwards around mid-September and October.

There is a great similarity between this silver’s bull market and the rally from 1971 to 1980.

Silver had risen to $ 50 in 1980 and I am expecting an identical increase towards $ 500 in the next years, in particular because of the RESET related to the Monetary Reform.

If we look at the 1972 graph, we see that the $1.64 threshold was tested in April and May, during successive upsurges. At that time, the pull-backs had been completed very quickly, but it was only the fourth upward push, which made it possible to overcome this major resistance. Once this resistance broke, there was a violent rally of two months to $ 1.95, before a sudden return to the very long-term support. 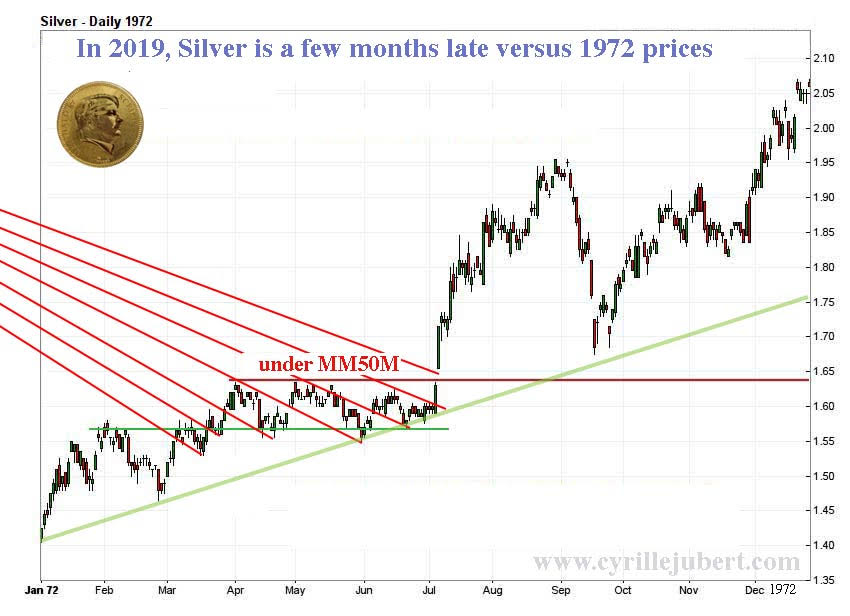 This date corresponds to the announcement of the future composition of the SDR, the international currency issued by the IMF. As I explained it here in May, I am waiting for a major change in the SDR's basket. The announcement of this change is expected to cause a sharp acceleration in the rise of precious metals at the end of 2020 and throughout the whole year 2021. We will see at what level they will be at that time. 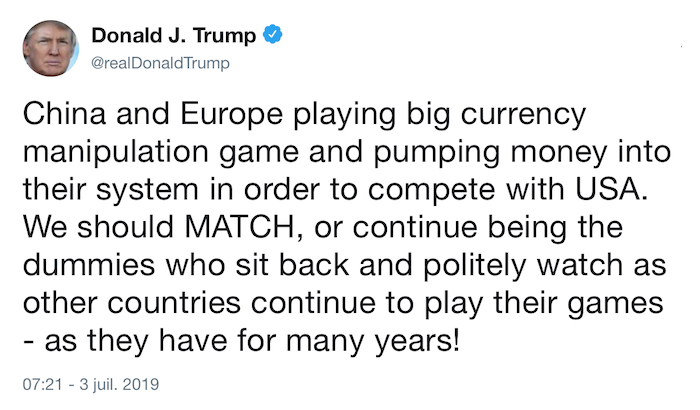 As you know, Trump keeps sending Tweets by vituperating against China and the European Union, who manipulate their currencies to better compete with the United States unfairly. Since being elected, he preaches for a weaker Dollar. And he's right.

The ECB must manage an unbalanced eurozone by Germany, which has the largest trade surplus in the world in volume, which generates deflation and a European banking system still in crisis, where the Deutsche Bank suffers a "bank run" of its hedge-fund clients, which is sowing panic in the system. To fight against deflation, which is the worst fear of central bankers, the ECB perpetuates the most accommodative monetary policy, which lowers the Euro against the Dollar. 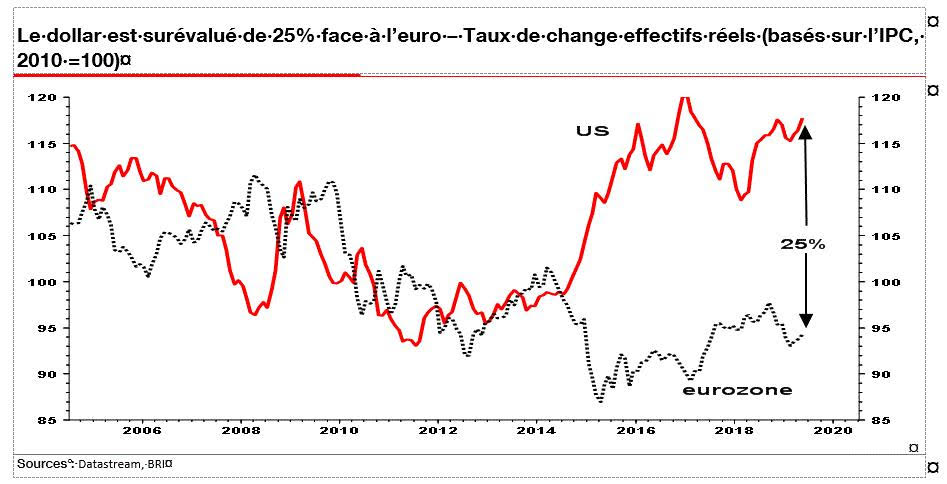 Be sure that the opinion of the BIS is to be listened. When this opinion goes in the direction desired by Trump, you can, rightly, ask you when a brutal adjustment will be triggered.

In a famous speech in 2002, former Chairman of the Federal Reserve Ben Bernanke said:

"Although a policy of intervening to affect the exchange value of the dollar is nowhere on the horizon today (heard in 2002), it's worth noting that there have been times when exchange rate policy has been an effective weapon against deflation. A striking example from U.S. history is Franklin Roosevelt’s 40 percent devaluation of the dollar against gold in 1933-34, enforced by a program of gold purchases and domestic money creation.

The devaluation and the rapid increase in money supply it permitted ended the U.S. deflation remarkably quickly.

Indeed, consumer price inflation in the United States, year on year, went from -10.3 percent in 1932 to -5.1 percent in 1933 to 3.4 percent in 1934.17 The economy grew strongly, and by the way, 1934 was one of the best years of the century for the stock market. If nothing else, the episode illustrates that monetary actions can have powerful effects on the economy, even when the nominal interest rate is at or near zero, as was the case at the time of Roosevelt’s devaluation."

It's a safe bet that we will see a competitive devaluation of the Dollar in the coming months and the currency war will only begin.

Remember that in 1988, The Economist announced that "in about 30 years, around 2018... the people will choose the Phoenix for its convenience and the stability of its purchasing power" - which induces that the national and regional currencies will have to know a period of high volatility in their purchasing power.

To preserve yourself, the only solution is to be in gold and silver.