Central banks around the world are increasing the gold they hold in foreign exchange reserves, bringing the total to a 31-year high in 2021.

Central banks have built up their gold reserves by more than 4,500 tons over the past decade, according to the World Gold Council, the international research organization of the gold industry. As of September, the reserves totaled roughly 36,000 tons, the largest since 1990 and up 15% from a decade earlier.

The value of the dollar against gold has dropped sharply over the last decade as large-scale monetary relaxation has kept boosting the supply of the U.S. currency. Although the U.S. Federal Reserve is starting to tighten its grip on credit, other central banks continue their shift to gold, reflecting global concerns about the dollar-based monetary regime.

Gold is not directly linked to any nation's economy and can withstand global unrest in financial markets, Adam Glapinski, president of the National Bank of Poland, was quoted by local media as saying in September as he explained the Polish central bank's buildup of gold reserves. The NBP bought some 100 tons of gold in 2019 and continues to purchase the yellow metal.

The purchase of gold by emerging economies is continuing. In the first nine months of 2021, Thailand bought some 90 tons, India 70 tons and Brazil 60 tons. 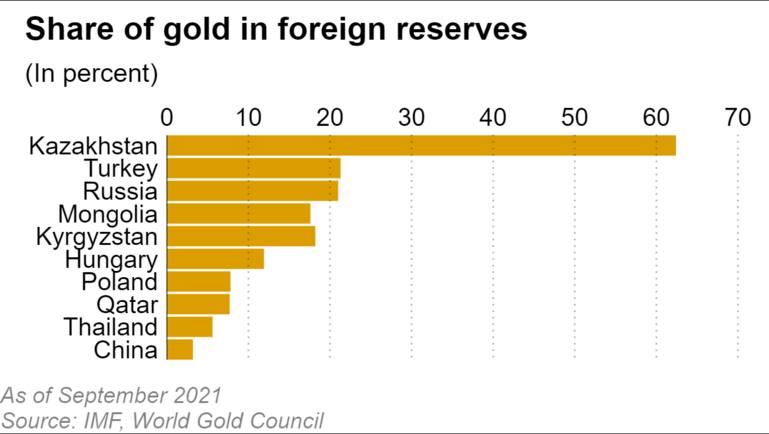 Unlike U.S. government bonds and other dollar-denominated assets, gold bears no interest. But the central bank of Hungary trebled its gold reserves to more than 90 tons last spring because the metal is free from credit and counterparty risks.

Large purchases of gold were limited in the past to the central banks of Russia and some other countries trying to free themselves from reliance on the dollar because of political confrontations with the U.S.

Recently, the central banks of emerging economies, which tend to be exposed to plunges in the value of their currencies, and of Eastern European countries of limited economic scale have been noticeable buyers. Faced with a persistent depreciation of its currency, Kazakhstan has sharply raised the ratio of gold to foreign exchange reserves.

Central banks and public institutions began to increase the holding of gold in around 2009. Until them, they had often sold gold to increase the holding of dollar-denominated assets such as U.S. Treasury securities. With the U.S. enjoying a buoyant economy in the 1990s as the sole superpower after the end of the Cold War, profit generated by dollar-denominated assets was attractive to other countries.

The global financial crisis of 2008 caused an outflow of funds even from U.S. government bonds, resulting in falls in the value of dollar-denominated assets. Trust in dollar assets thus "faltered," said market analyst Itsuo Toyoshima. 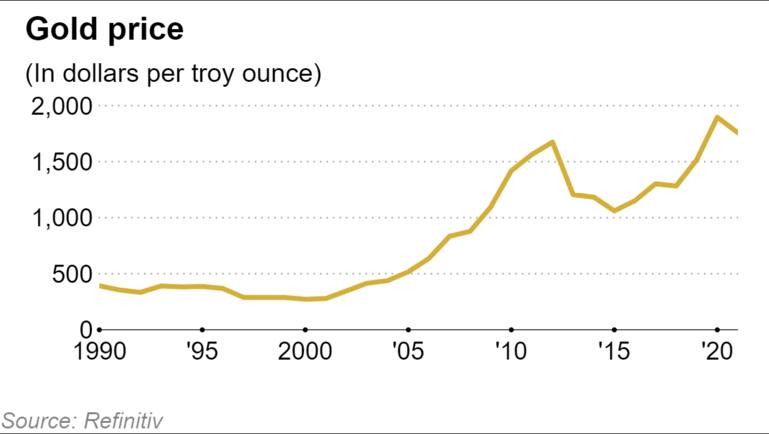 The crisis was followed by declines in long-term U.S. interest rates as a result of large-scale monetary relaxation, making the continuous holding of dollar-denominated assets less advantageous. The central banks of emerging economies with weak credit strength began to "protect their assets with gold," said Koichiro Kamei, a financial and precious metal analyst.

The presence of the dollar in foreign exchange reserves is falling, in contrast with the growth of gold. In 2020, the currency-by-currency ratio of the dollar fell to the lowest level in a quarter of a century.

The declining presence of the dollar is partly attributable to long-term falls in the value of the currency vis-a-vis gold. Since U.S. President Richard Nixon announced a decision in 1971 to end the dollar's convertibility to gold, the currency's value has fallen to roughly one-fiftieth of its former level because the U.S. supply of dollars, unshackled from gold, has increased some 30 times over the past 50 years.

The Fed has made clear it is ending its easy money policy and projected that it will begin raising interest rates in 2022. But the central banks of emerging economies are likely to continue their shift to gold from the dollar.

Gold prices remain firm, although the metal is considered unresistant to rate increases. On Dec. 23, gold was quoted at the $1,807 level per troy ounce, up 2% from just before the Fed's Dec. 15 announcement of a decision to accelerate the tapering of its quantitative monetary easing policy.